Cats are extremely common pets that can be found in homes, barns, and yards across the globe. A plethora of breeds prowl the market, meaning that hopeful adopters can find just about any kind of feline they’d like to join their family. While cat breeds can be sorted into any number of categories, today we’ll be looking at some of the largest cat breeds available in the world.

These purring giants are sure to steal your heart with their gorgeous eyes, beautiful coats and charming characteristics. If big cats are your family’s favorite, then any of these breeds could be a perfect fit. Let’s take a look at 10 of the largest breeds of domesticated cats in the world. 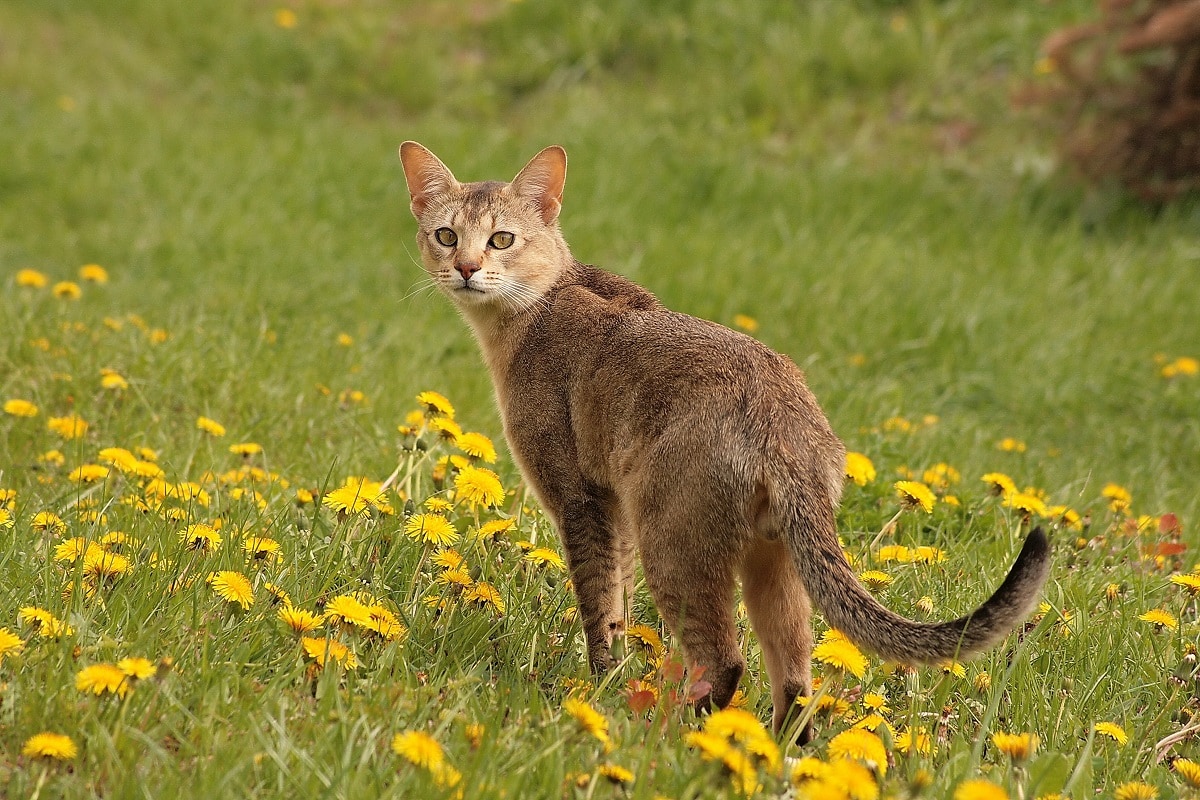 This fantastic feline is the first domestic/jungle hybrid cat to be documented by The International Cat Association. A well-developed cross between the original domesticated cats of Ancient Egypt and the wild Jungle Cats of the Middle East and Southeast Asia, the Chausie is well known for its pleasant temperament and athletic build. The Chausie’s impressive weight does not serve to make it look bulky or heavy. While large, this cat’s proportions remain graceful and well-adapted for running and jumping. Its tall build and long ears add to its overall look of strength and grace.

The name “Chausie” comes from the Latin name of the Jungle Cat that was bred with domestic cats in Egypt– “Felis chaus.” 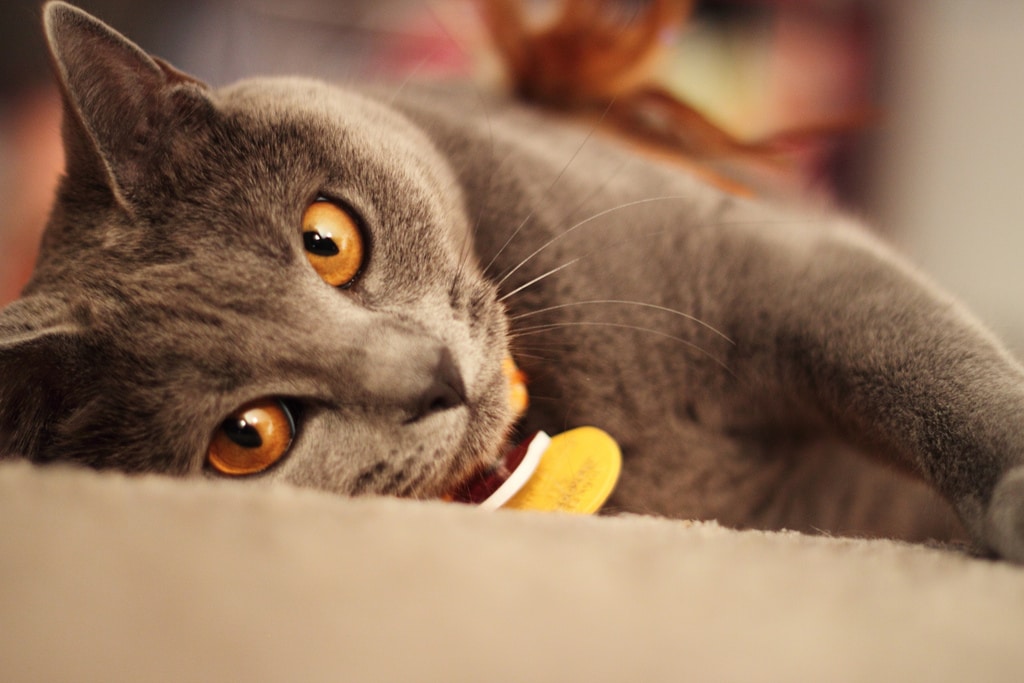 These charming cats are especially friendly, and make for excellent additions to homes with other pets or children. They play well with others, and are known to be very affectionate.

While quite similar in appearance to the British Shorthair cat, this entirely separate cat breed presents its own set of merits. Chartreux cats are generally very healthy, and are not predisposed to health problems when properly cared for. Their sweet, non-aggressive temperament also holds strong as a dominant trait, so while purebred Chartreux are hard to come by, mixed breeds will often carry on the Chartreux’s gentle nature.

Chartreux cats are sensitive, and have shown a tendency to bond with one family member over the others in their household. But don’t worry–no matter who this cat follows from room to room, it will still be gentle and affectionate towards everyone. 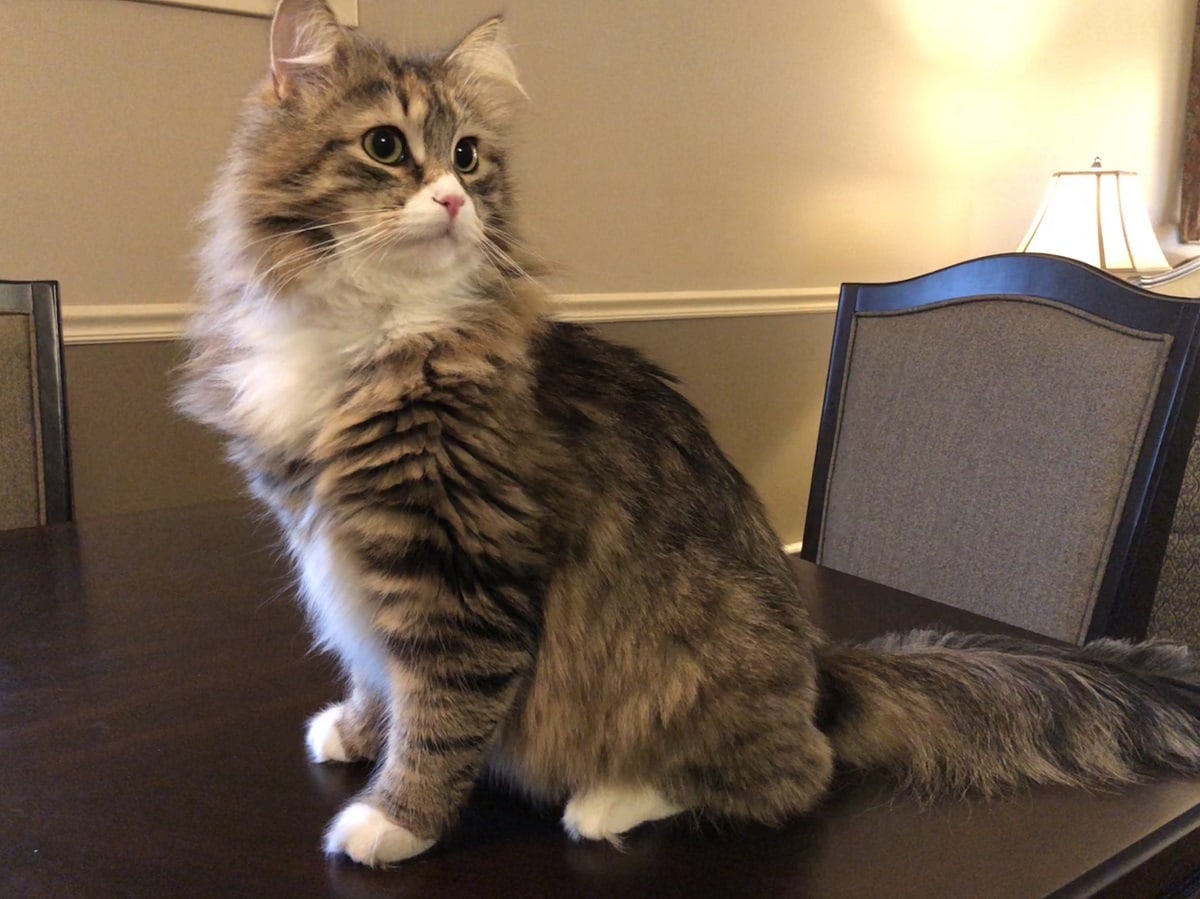 Between the Siberian Cat’s impressive coat and striking eyes, its appearance can almost lean towards intimidating. But while this cat certainly has a majestic figure, it’s widely known for its bold and calmly composed temperament. As such, this cat makes another kid-and-pet -friendly addition to the home.

Well adapted for tough Russian winters, the Siberian Cat also boasts a hardy disposition and low risk of illness. This sturdy feline has been loyally inhabiting farms, monasteries, and forest homes for centuries.

This glorious, snow-ready cat is the national cat of Russia! As a long-standing part of the culture, Siberian Cats make appearances in folklore and art as well. 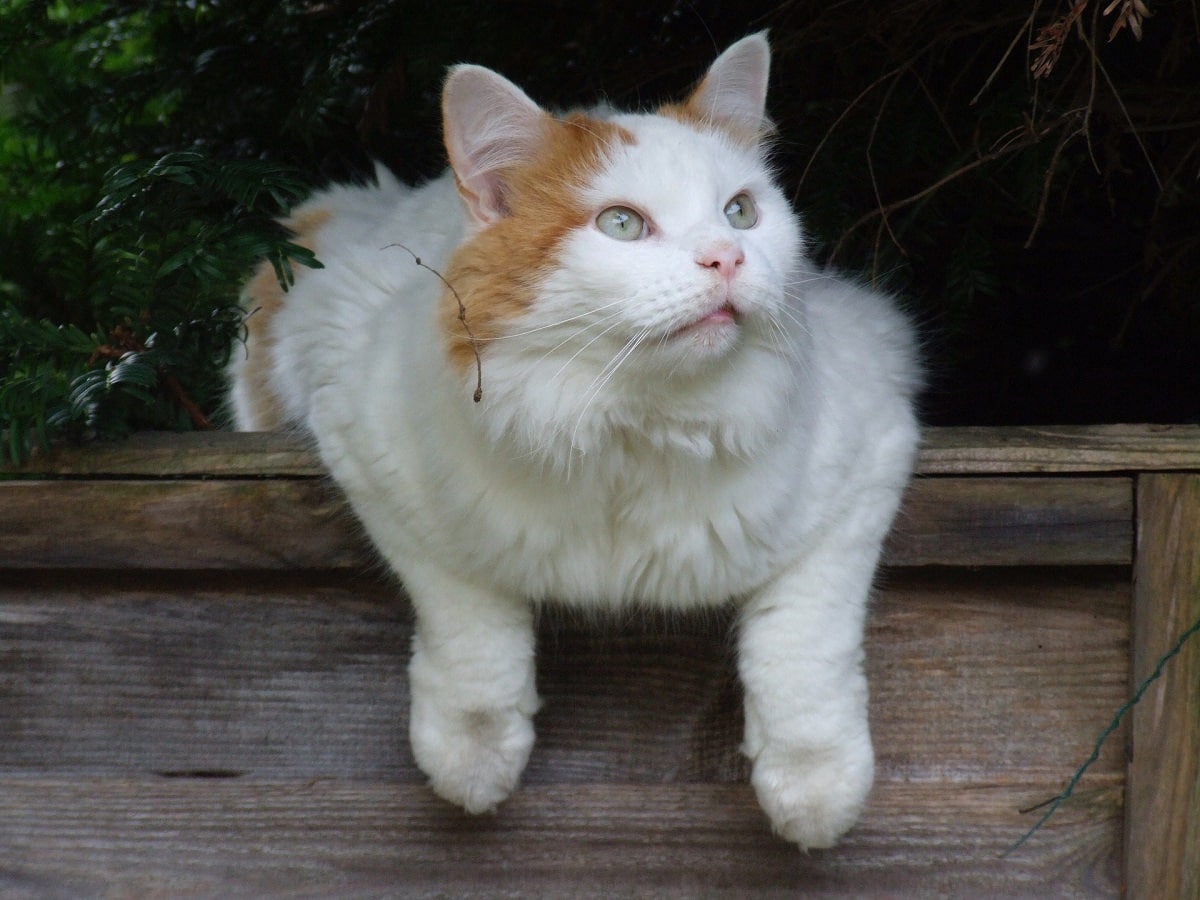 The name “Van” is used to classify this cat’s distinctive fur pattern– a predominantly white coat, except for colored head and tail markings. This beautiful cat is known as the “swimming cat” due to its unusual swimming ability and affinity for playfully dipping its paws in water.

According to religious myths, this cat’s history is steeped in mysticism–various spiritual legends have attributed the Turkish Van’s eye-catching markings to heavenly interference. Some say that the cat’s tail turned red when it was accidentally closed in one of the doors of Noah’s Ark. Others say that the hand of god touched this cat on the head, leaving colored markings behind. No matter where this cat gets its markings from, its beauty and playfulness are certainly divine. 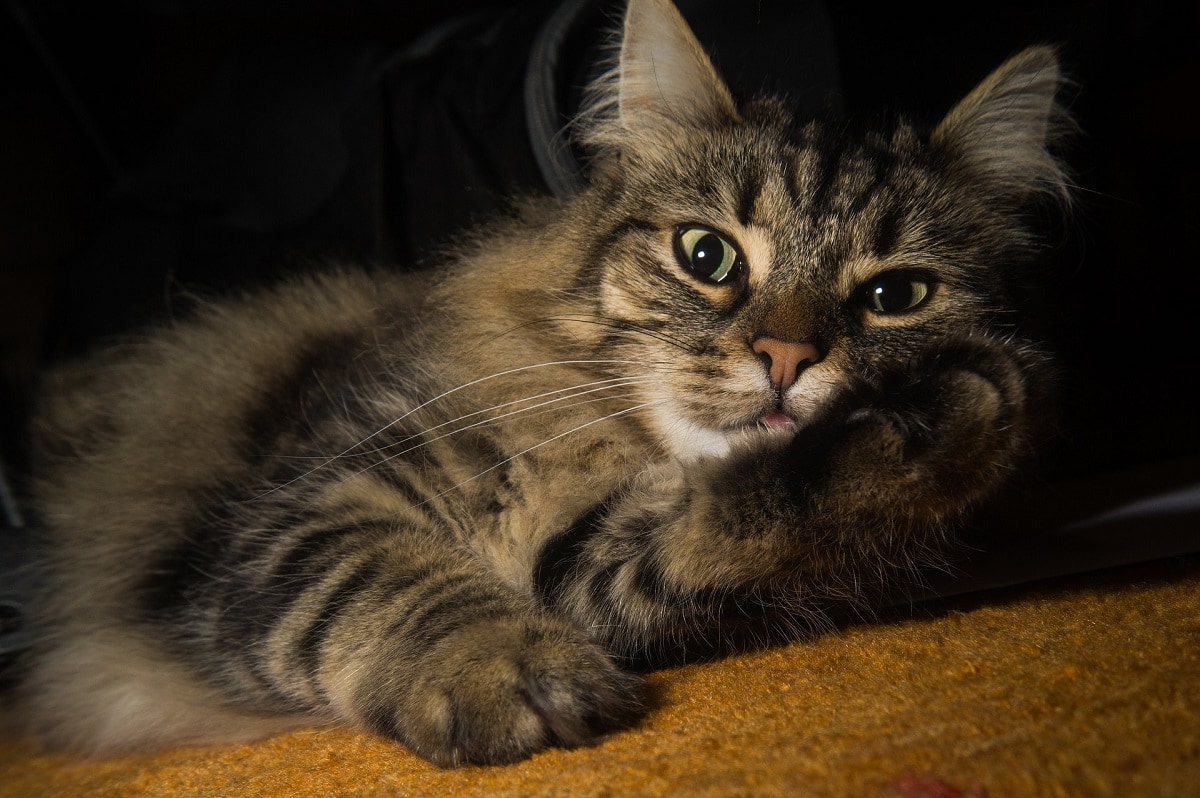 These luxuriously silky cats are known for their friendliness and tendency to bond with various family members equally. They’re great with children due to a steady, calm disposition that’s hard to shake.

Unfortunately, these cats are more prone to illness that some of their large cousins. Those who wish to keep the lovely Norwegian Forest Cat as a pet should be prepared to provide their four-legged friend with the necessary medical attention. This can include DNA tests to determine whether the feline is at risk for common conditions that plague the breed.

No bookcase or shelf is off-limits to the Norwegian Forest Cat. Perhaps due to their woodland origins, this agile cat loves to jump and climb. Those sharing their home with a Norwegian Forest Cat would do well to provide them with a variety of cat-friendly structures to climb. 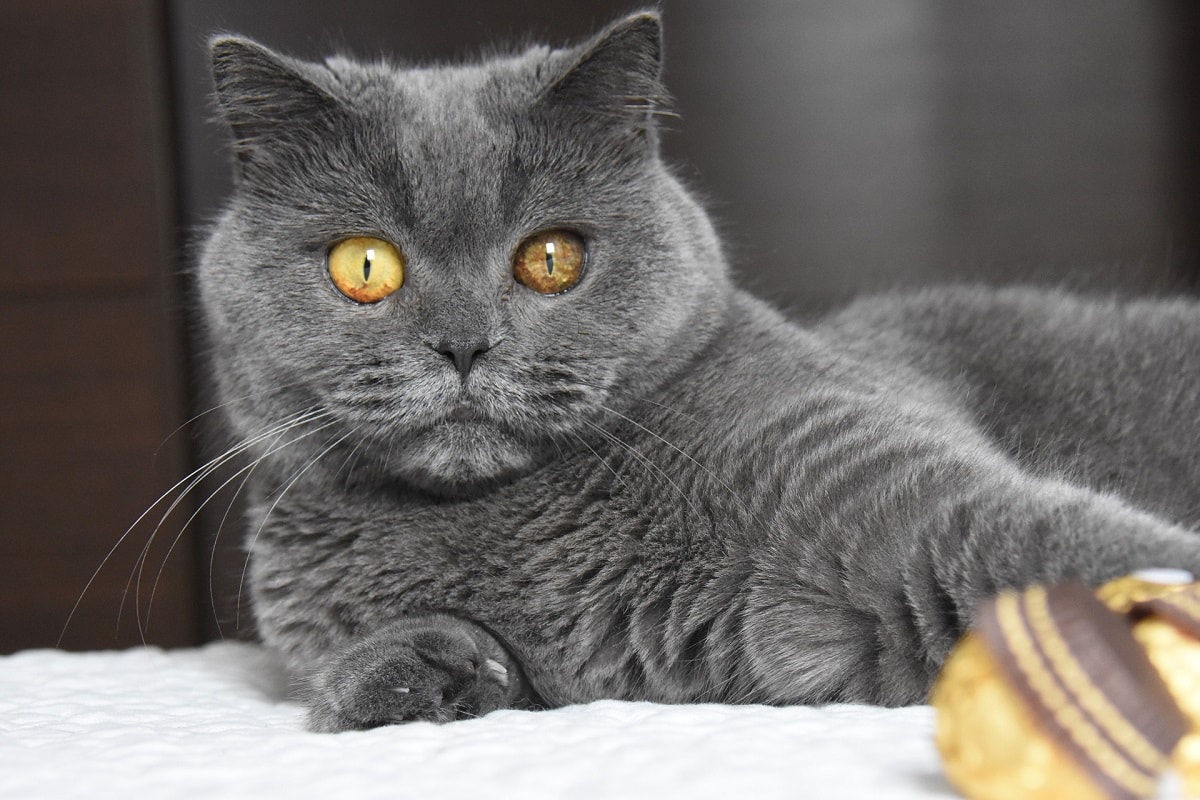 This British cat’s stocky build gives it a chummy appearance that’s backed by a calm disposition. The British Shorthair, while in need of regular grooming to keep shedding under control, produces less dander than many cats do. This makes it far more likely to be a good match for people who have struggled with cat dander allergies–as a result, it’s a good first-time cat. This breed is also at comparatively low risk for health issues, making it easier to care for during its elder years of its 14-20 year lifespan.

The British Shorthair cat sports unusually pronounced jowls and cheeks–especially the males. This endearing trait has led people to fondly refer to this breed as “the Original Cheshire Cat.” 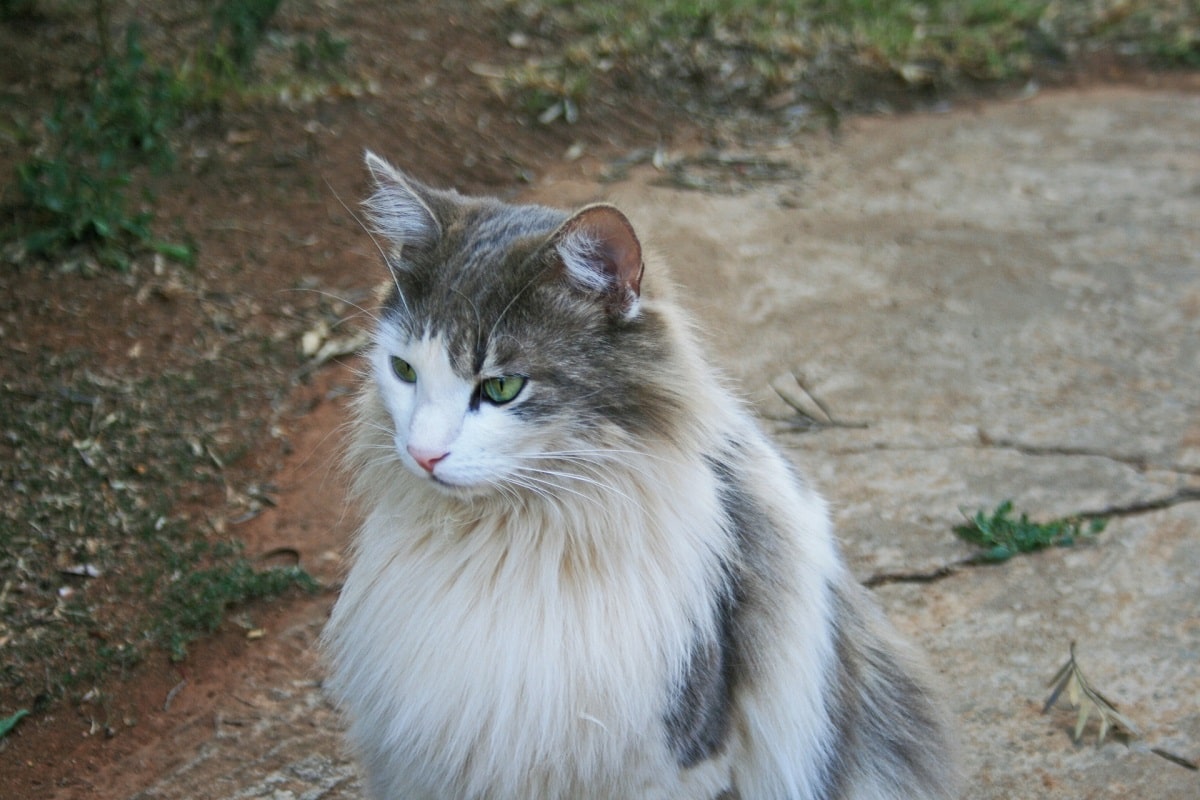 Another gentle giant, the Ragdoll cat gets its name from its tendency to go completely limp like a doll when lifted and held. This family-friendly cat often sports a coat with charming “colorpoint” markings, meaning that the body remains pale while the extremities are darker in color. The Ragdoll has gained a reputation as the second most popular breed in America, and for good reason.

While the luxurious coat of the Ragdoll cat might appear intimidating to people in search of a low-maintenance cat, this breed is actually pretty easy to groom. Its thinner undercoat means that tangles and mats are less likely to crop up, and the Ragdoll’s affectionate nature makes it a cooperative subject during grooming sessions. 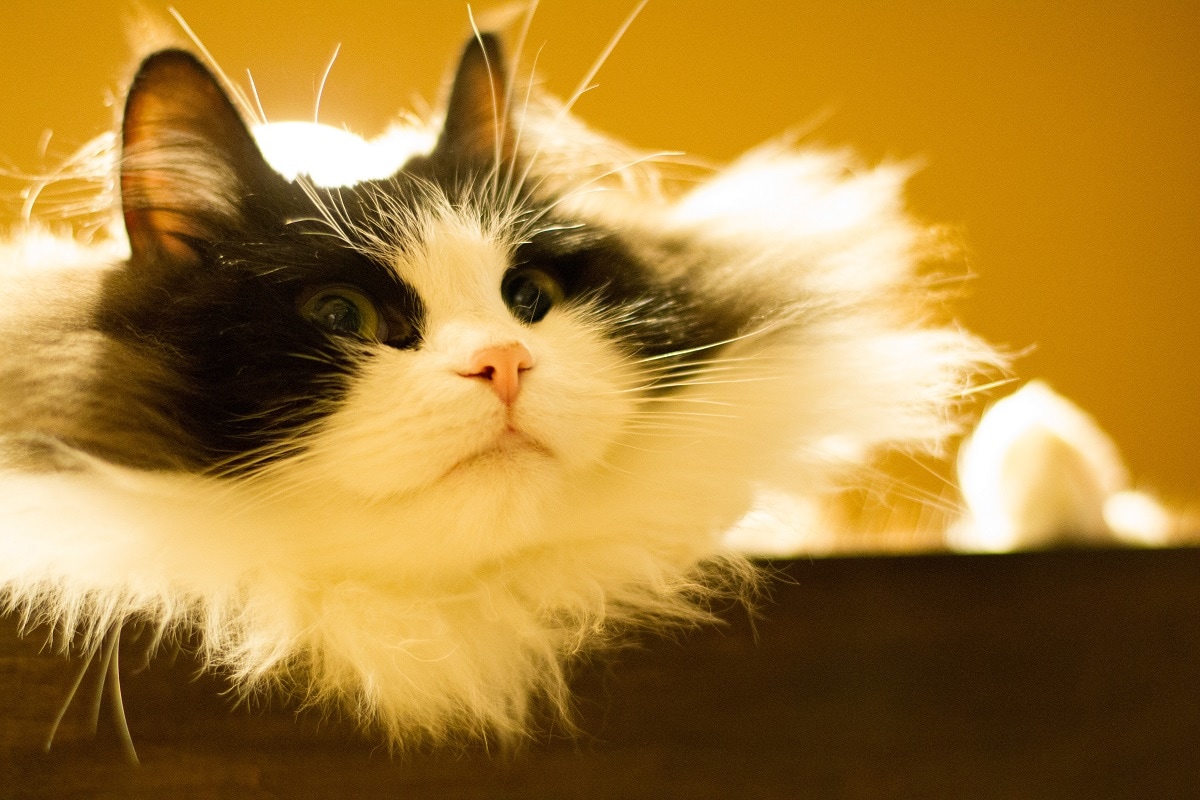 Take care not to confuse this adorable breed with its Ragdoll relatives! The Ragamuffin cat is its own distinct breed that was created by crossing Ragdolls with other long-haired breeds. Considered to be one of the sweetest cat breeds, Ragamuffins are often nicknamed “teddy bear cats” in reference to their cuddly personalities. This breed is so trusting and affectionate, in fact, that owners are advised to keep their Ragamuffins from roaming free lest they make new friends and wander off.

Ragdoll kittens are all born white and develop other colors, patterns, and markings as they age. There can be a surprising variety in colors within any given litter, sometimes with pure white and pure black cats having siblings with completely different patterns. 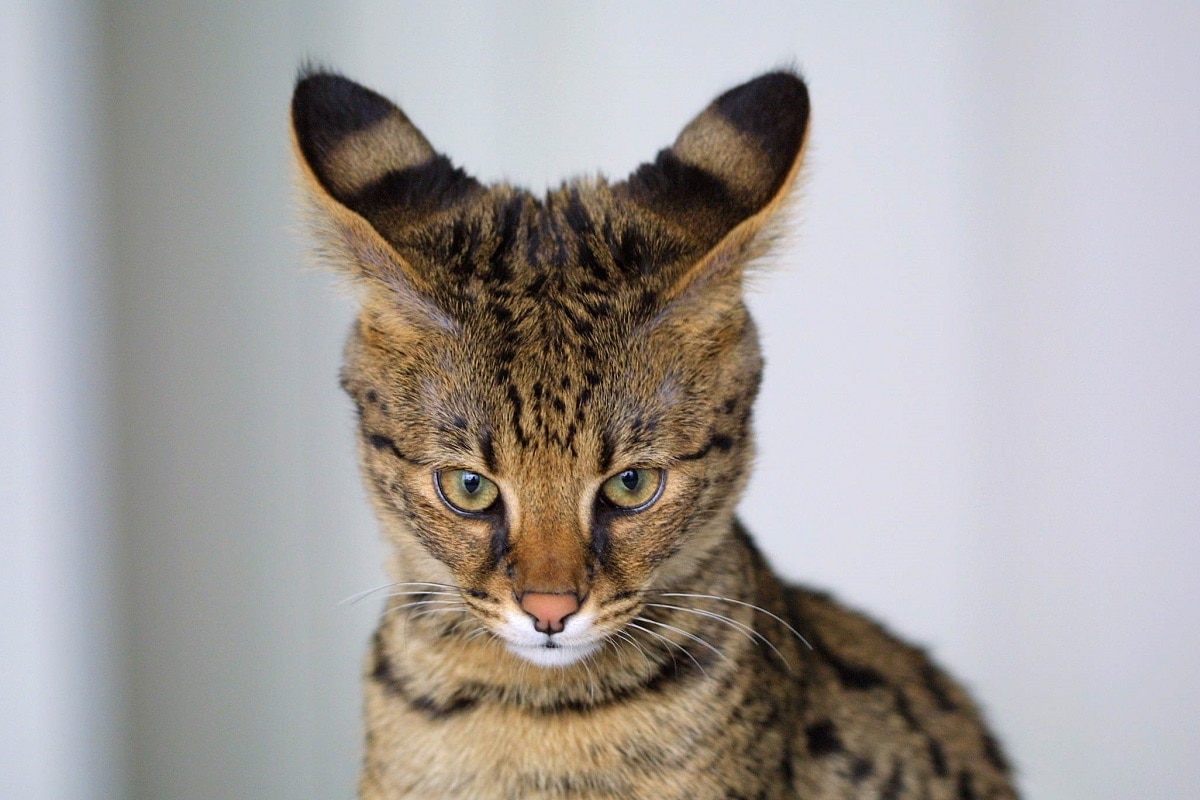 Yes, you read that price range correctly–Savannah cats can cost a small fortune to own. Their hefty cost arises from the fact that they’re a cross between domestic cats and wild Servals. Servals take a lot of specialized care in both maintenance and breeding, which requires a lot from the breeders. As such, the price range varies greatly depending on the Serval content of the cat: the higher the Serval content, the higher the price.

Despite the price, many people consider the novelty of having a pet that’s part wildcat to be well worth it, and are happy to pour lots of love and resources into spoiling their feline. It’s often advised that people keep Savannah cats as their only pet, since this breed retains extremely strong hunting instincts that don’t mix well with other small animals.

While Savannah cats are too active in nature to make good lap cats, they love activities like playing in water, playing fetch, and even going for walks on a leash. 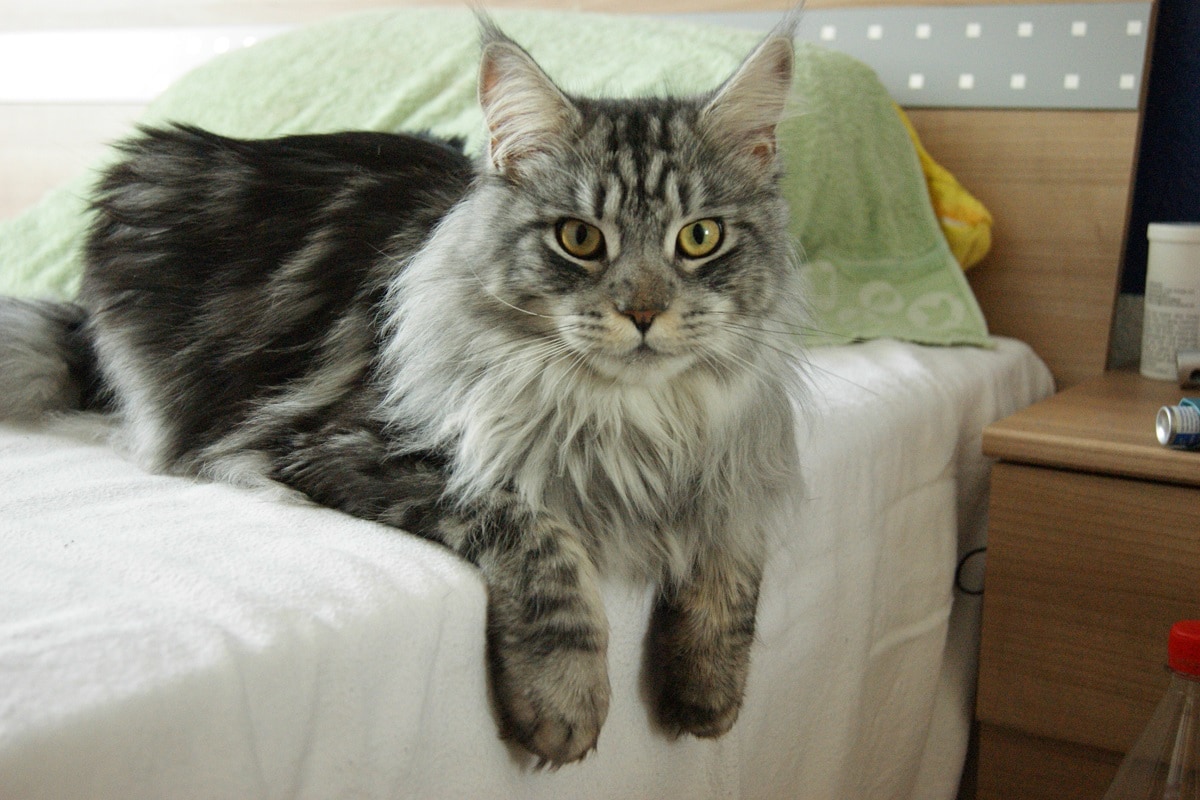 The Maine Coon is the largest cat breed in the world. Regularly referred to as “the dog of the cat world,” Maine Coon cats are steeped in legends and tall tales that claim to account for the the majestic creature’s origins. While most of these stories are clearly only myths, this cat certainly has an impressive presence. With its signature thick coat, tufted paws, and muscular build, the Maine Coon is well-adapted to the harshest of winters.

Like the Savannah cat, Maine Coons are willing to learn how to play fetch and go for walks on a leash. This adaptability makes the Maine Coon a good travel companion or a great fit for someone with an active lifestyle.

If you’ve enjoyed reading this, be sure to check out the Rarest Cat Breeds in the World.