Lego® toys are among the most popular and enduring children’s toys of all time. Part of what fuels their longevity is that the sets can appeal to adults, and not just for nostalgic reasons. Massive Lego® sets of over 1,000 pieces can be a challenge for even professional mechanical engineers. With sets that go in excess of 5,000 pieces, there are plenty of challenges out there.

Kids’ eyes may grow big with awe when looking at these giant sets; however, Lego® markets these towards adult collectors. Many sets cost over $500 USD and are a special, limited release. They contain unique pieces molded specifically for the set. 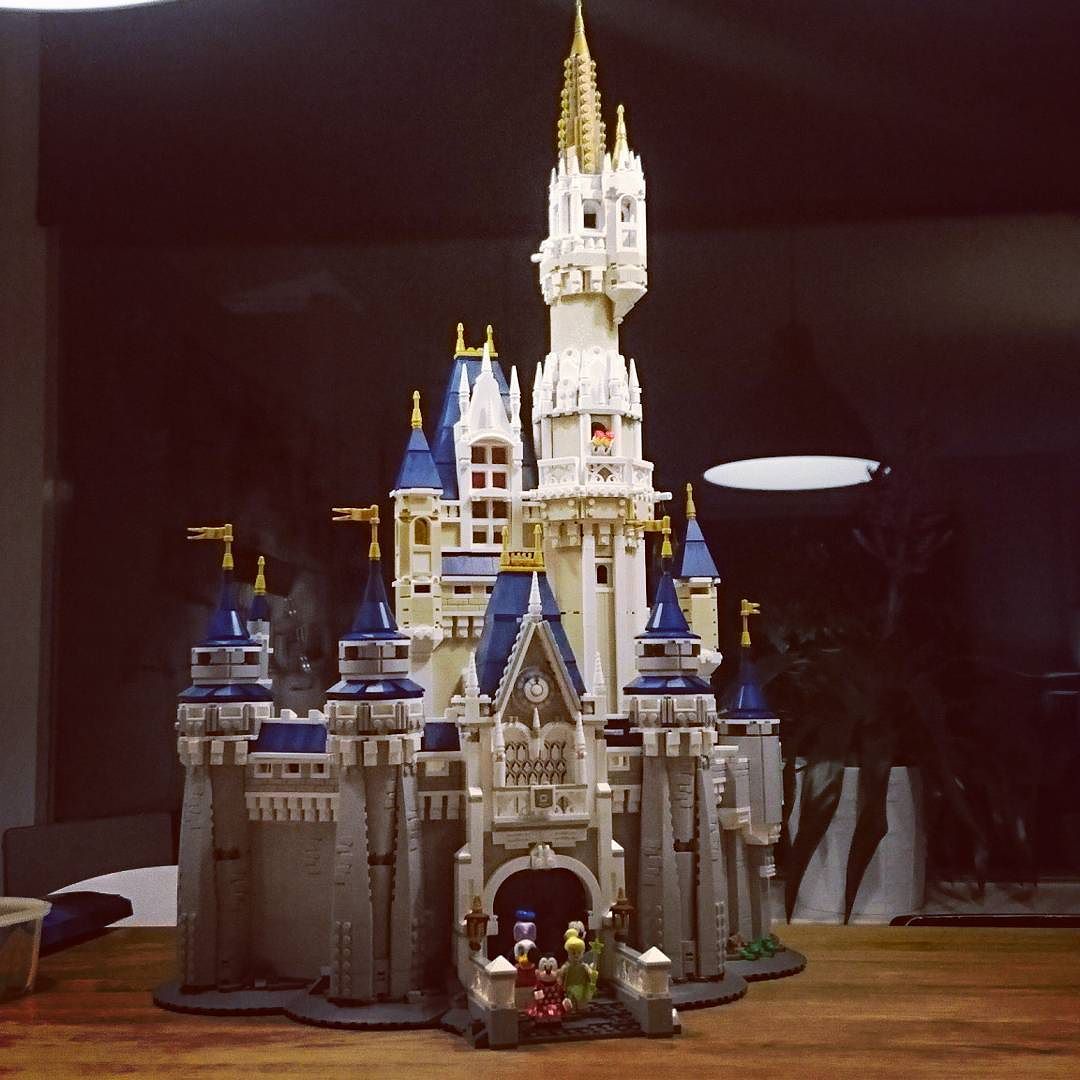 When the Walt Disney Company and Lego® announced their partnership, fans of both expected big things and that’s exactly what they received. Several of the largest ever Lego® sets represent Disney-owned properties like this set is an exact scale ????? replica of Cinderella’s Castle at Walt Disney World. This set eclipsed Lego®’s previous go at making a Cinderella Castle replica. While the older model is far more kid-friendly, the more recent model is grander in scale and made for the older crowd.

Some of the standout features includes:

The clocks in the castle are all set to five minutes before midnight, the perfect time for Cinderella’s castle. 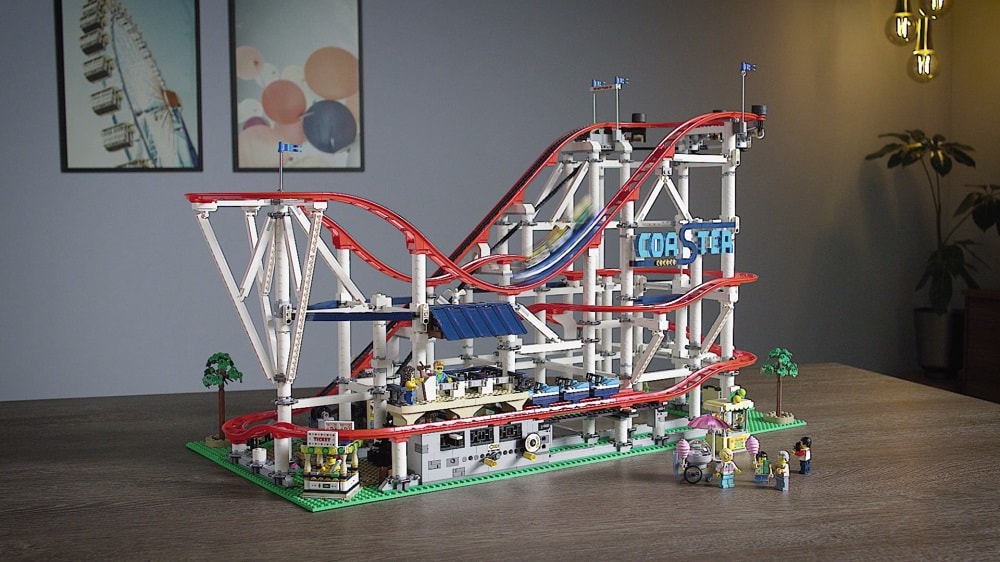 This Lego® set is part of the company’s Creator Expert line and part of the Theme Park series. The sets within the product line are meant for Lego® enthusiasts. It’s a straightforward roller coaster like the kind you may have seen in a nearby theme park. The set includes plenty of riders in the form of 11 mini-figures. The hardcore builder may want this set to enjoy the process. However, you can still have fun with this set. With a couple of battery-powered add-ons, you can make the cars on the roller coaster ride the rails and you can light the lights. You can even program them to run when and how you would like. If you don’t have the add-on, you can still make the cars move by a small hand crank.

The creator of this set has never ridden a roller coaster. He created the set through online research. 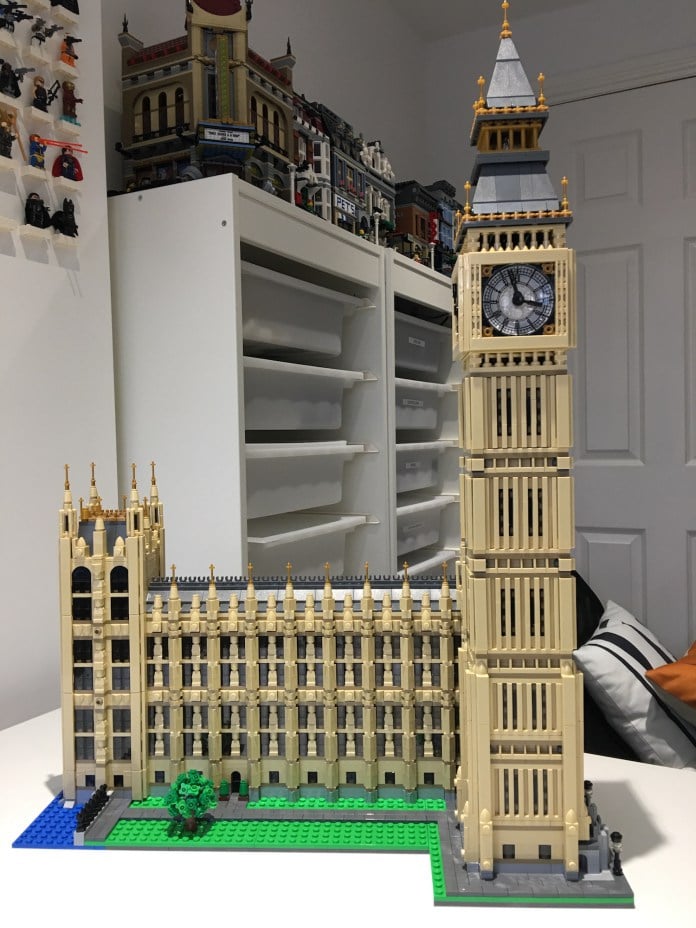 Another enthusiast’s dream, the set is a replica of the famous Elizabeth clock tower in London. Builders can adjust the time on the four clock faces on the tower and remove the roof to access the tower’s belfry, where you can see “Big Ben,” the giant bell where the clock received its popular name. The set includes the Westminster palace, though you cannot build any exterior rooms in the palace. There are custom-built elements as there are on many of the giant Lego® sets. In the Big Ben set, there are some mini-figures meant to represent the various statues on the clock tower’s side.

Lego® intended to allow users to match Big Ben with another set based on a famous London landmark, the Tower Bridge set. 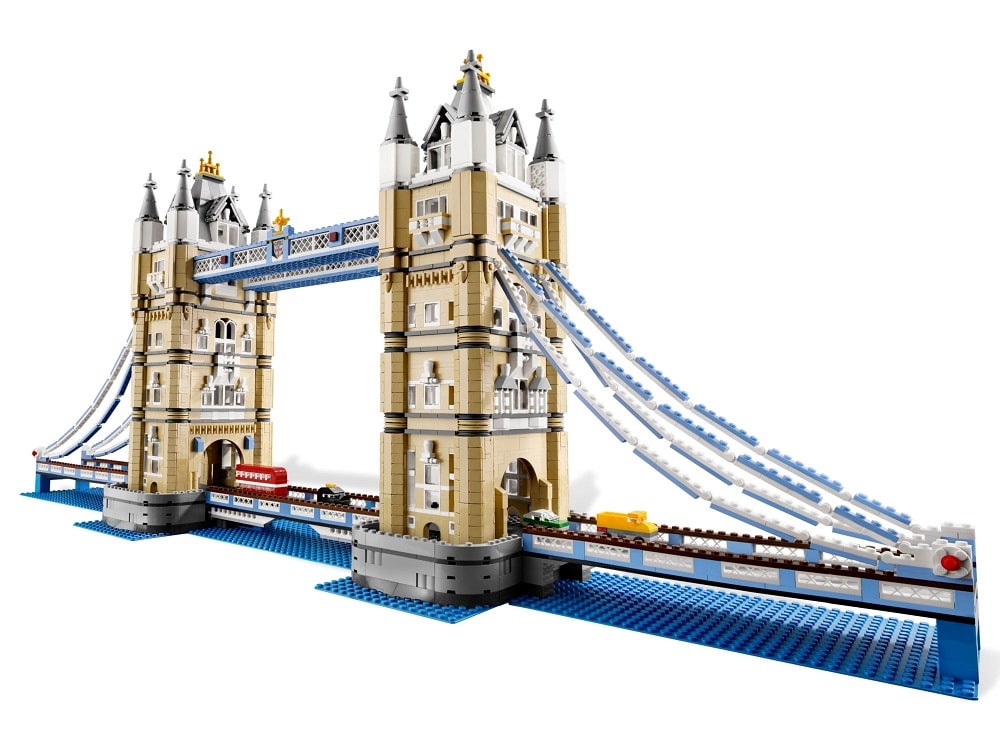 The seventh largest Lego® set also represents London, England in the form of the bridge immortalized in a children’s song; yes, it’s the London Bridge. The set features a working drawbridge and dangling suspension wires that require special connection pieces unique to this set. To give the set additional realism there’s a double-decker bus included (along with other mini-cars), like those that cross the bridge daily.

While the two bridge towers are built to scale, the designer Jamie Berard, decided to make the connecting walk bridge shorter so that the set could fit on a regular-size table. So then, the Tower Bridge set is not created to the exact level of specificity as most Lego® sets based on landmarks. 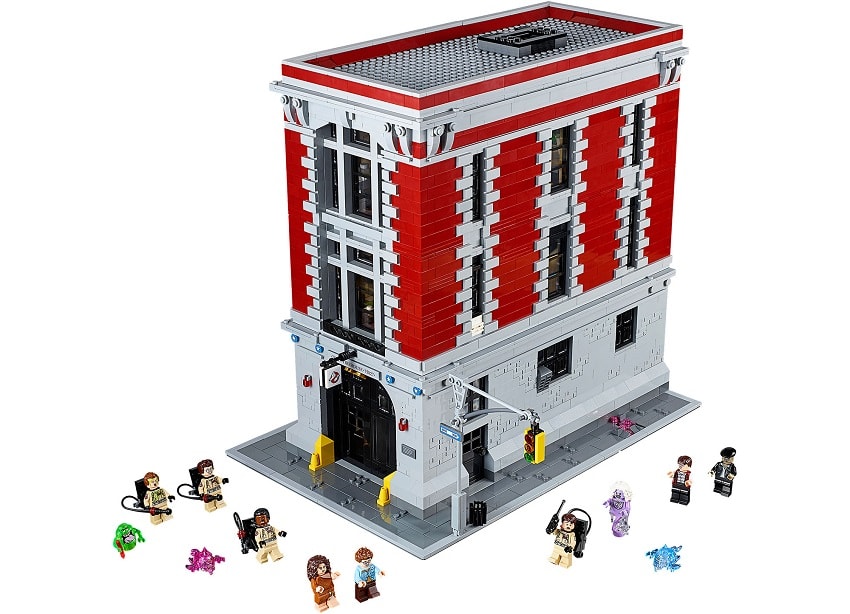 To celebrate the release of the remake of the Ghostbusters film in 2016, Lego® released a replica of the famous firehouse that the Ghostbusters team used as a headquarters. The set is large and complex enough for collectors, but contains items and details that younger Lego® builders can play with. Users build both the exterior and interior of the firehouse and can place the famous items from the original Ghostbusters movie. The interior is large enough to place a companion Lego® set based on the car from the movie inside. The set includes nine mini-figures representing the stars of the movie and some random ghosts.

Each human-based mini-figure has double-sided faces, one smiling and one with a different expression. 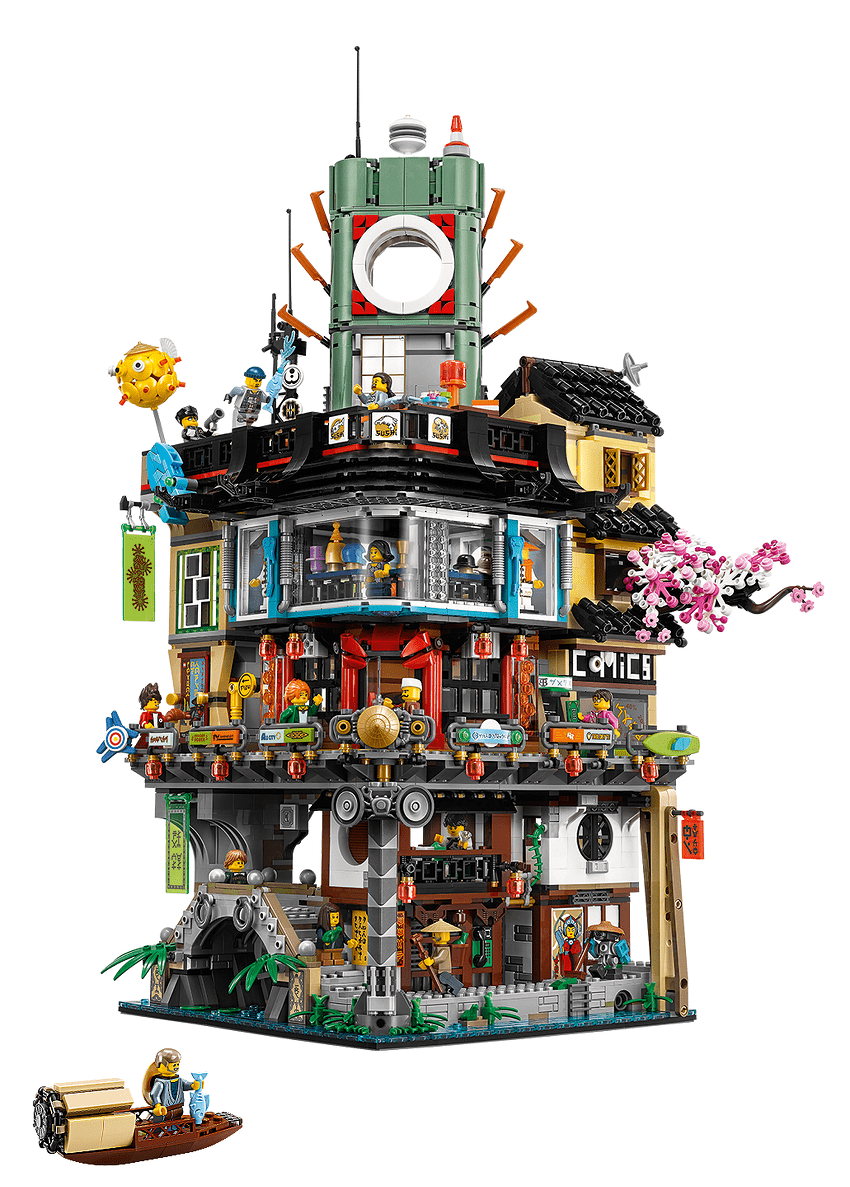 This set was a tie-in to the “Lego® Ninjago” movie and TV series co-produced by Lego®. When completed, the Ninjago City set is a multi-level building complete with living spaces, a martial arts dojo and shops for the various mini-figures included. The set combines design elements from various East Asian cultures to capture the atmosphere and look of the TV series. The set includes 16 mini-figures, the most out of the giant sets on this list.

While the Ninjago storyline and design elements are based mainly on Japanese and Chinese culture. However, they are creations of the writers and designers and have no real world basis. 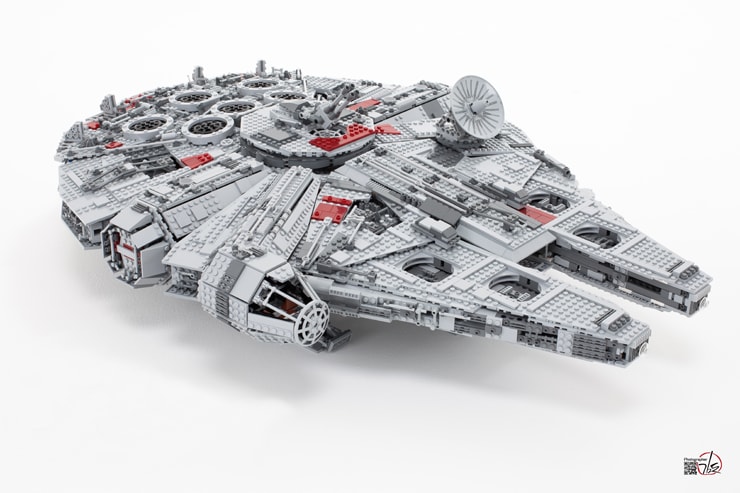 There may be only one other space vessel, fictional or otherwise, with the pop culture significance to inspire 15 retail version Lego® sets. The Millennium Falcon from the Star Wars entertainment franchise is certainly one of them. Anything the movie version of the ship can do, so can this Lego® version, except of course jump to hyperspace. Once completed, users can remove the top of the ship to access the interior. The set includes mini-figures from the original Star Wars: A New Hope movie, which can fit inside.

At the time of its release, the Ultimate Collector’s edition was the largest ever Lego® set in size, scope and number of pieces. 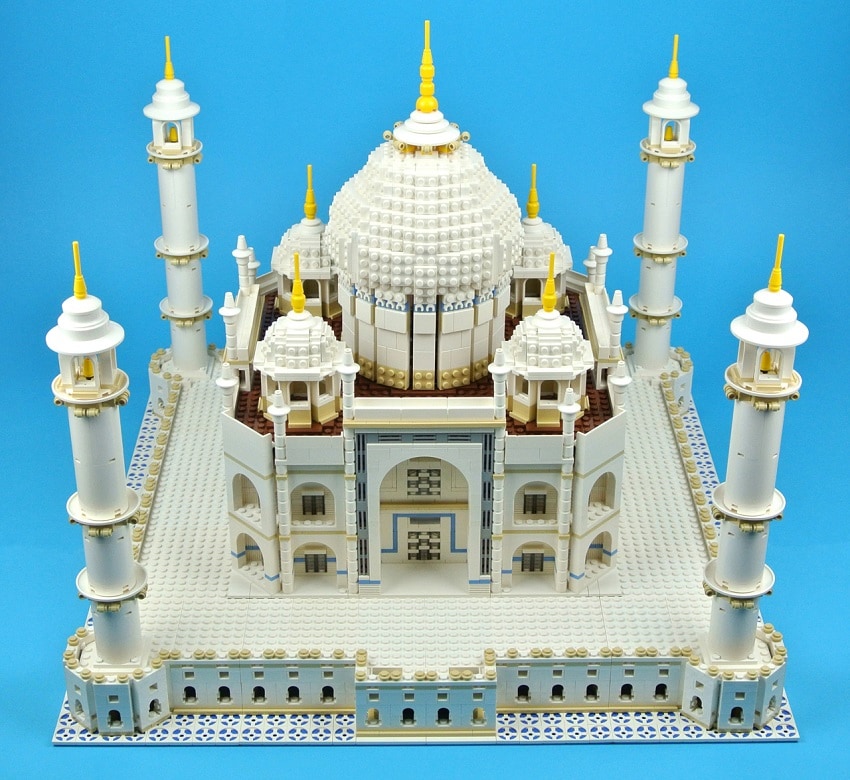 The first version of the Lego® Taj Mahal set was released in 2008. It quickly became one of the most popular ever and contained the most pieces ever included in a set. In 2010, Lego® re-released the set under the Creator Expert line. The new set was a complete re-working of the old set. One unique aspect of this new set is the modular build. Once you complete the build, you can detach parts into five separate sections, making it easier to move the set around.

When Lego® retires popular sets, the reseller market explodes. After Lego® retired the Taj Mahal in 2008, unopened sets were selling for as much as $3,000, over ten times the retail price. 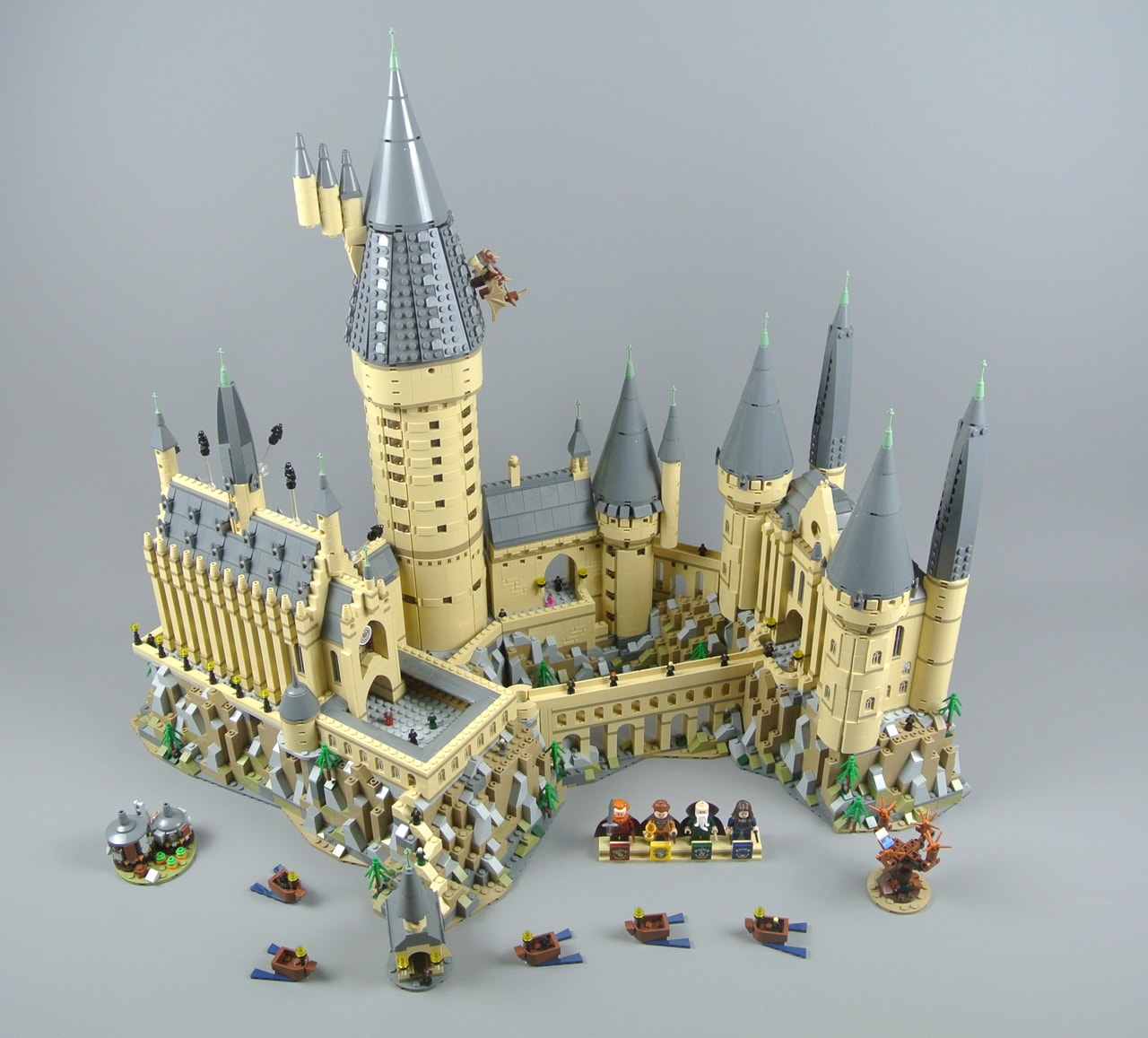 For those who can’t get enough of J.K. Rowling’s Harry Potter novels and movie franchises, Lego® has something to keep the imagination churning. This set draws elements from each novel and represents all the important events in the books, which can be accessed once the build is complete. Rather than creating the set to fit Lego® mini-figures, the set includes micro-figures (a smaller version) to encompass all the detail and chambers in the Hogwarts school. The micro-figures include Harry and Hermione of course, as well as 25 additional characters from the novels and a limited edition set of figures representing the founders of Hogwarts.

Designer Justin Ramsden collected Lego® sets as a child. The final piece count of the Hogwarts Castle matches the number on the first Lego® set he received. 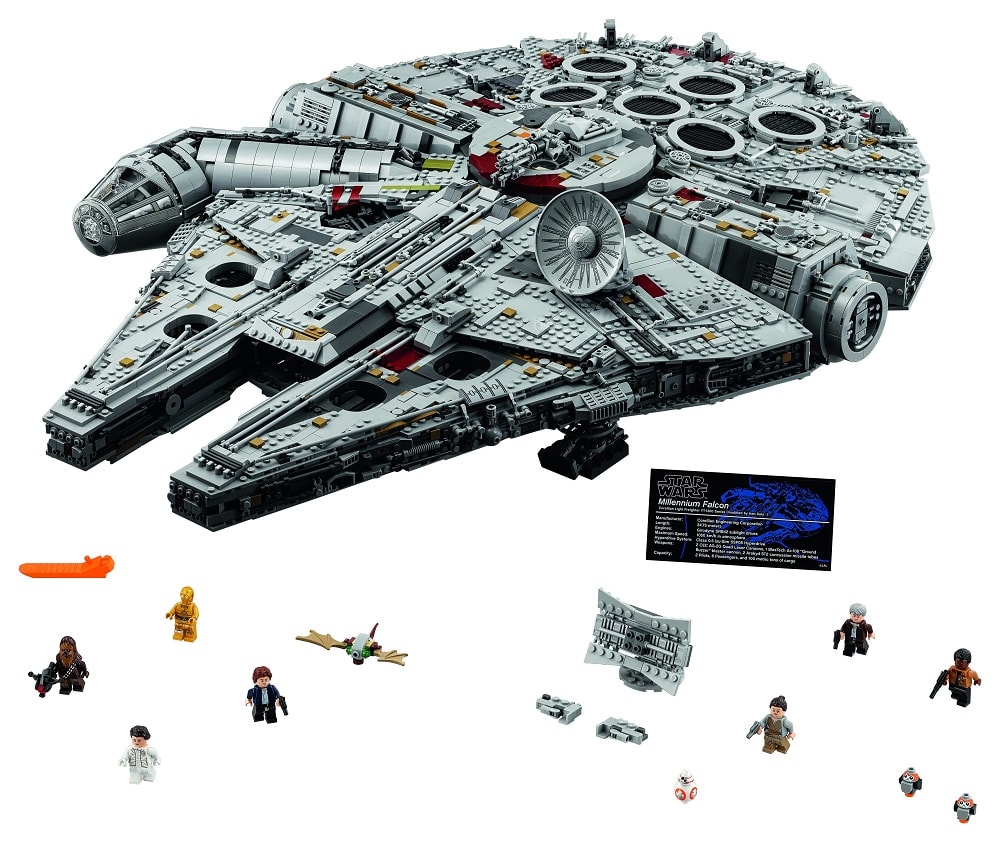 This is the largest ever Lego® set produced to date (2018) in piece count. It’s essentially a re-release of the Ultimate Collectors version of the Millennium Falcon, released in 2007. The final product is the same size as the 2007 version; however, the design team added over 2,000 new elements to the set including more interior rooms. This latest version allows you to build the ship to reflect the design of the 1978 film or the 2015 movie by swapping out pieces.