The human brain is a complex organ. While modern medicine separates it into a few different parts, none of them save the cerebellum could function on its own. The largest part of the brain, the cerebrum, is divided into parts itself, called lobes, all interacting with each other to carry out the complex actions we need to survive and get through the day. The brain is not only responsible for controlling our movements, it tells us when we’re hungry, when we’re aroused and when we need to sleep. It’s how we dream and how we plan our day when we awaken. It’s amazing what this 3 pound organ does for us.

Size: varies
Average weight: none
Location in the brain: throughout 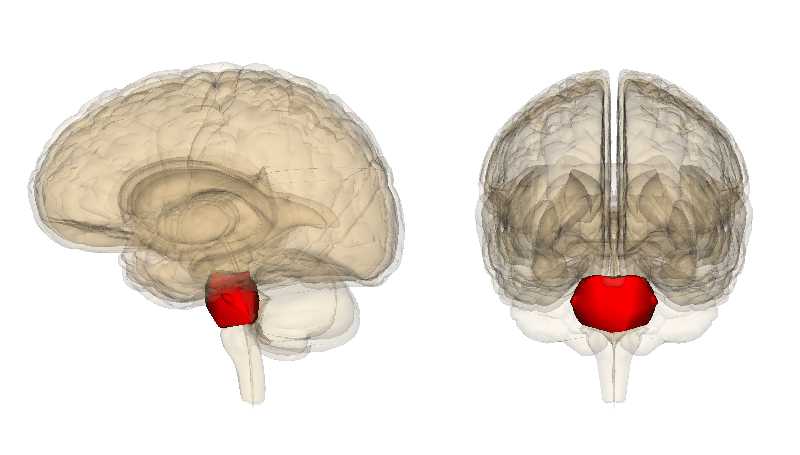 One could call the ventricles negative space within the brain. They are actually holes that serve as transport mechanisms for the cerebrospinal fluid (CSF). It delivers important nutrients to the brain to keep the proper chemical balance and thus proper brain function. The CSF also acts as a shock absorber for the brain, protecting it from damage by keeping it in one place and not bouncing against the skull.

There are four interconnected ventricles in the brain:

Ventricles that are too large have been observed in people with schizophrenia and affected by Chronic traumatic encephalopathy. 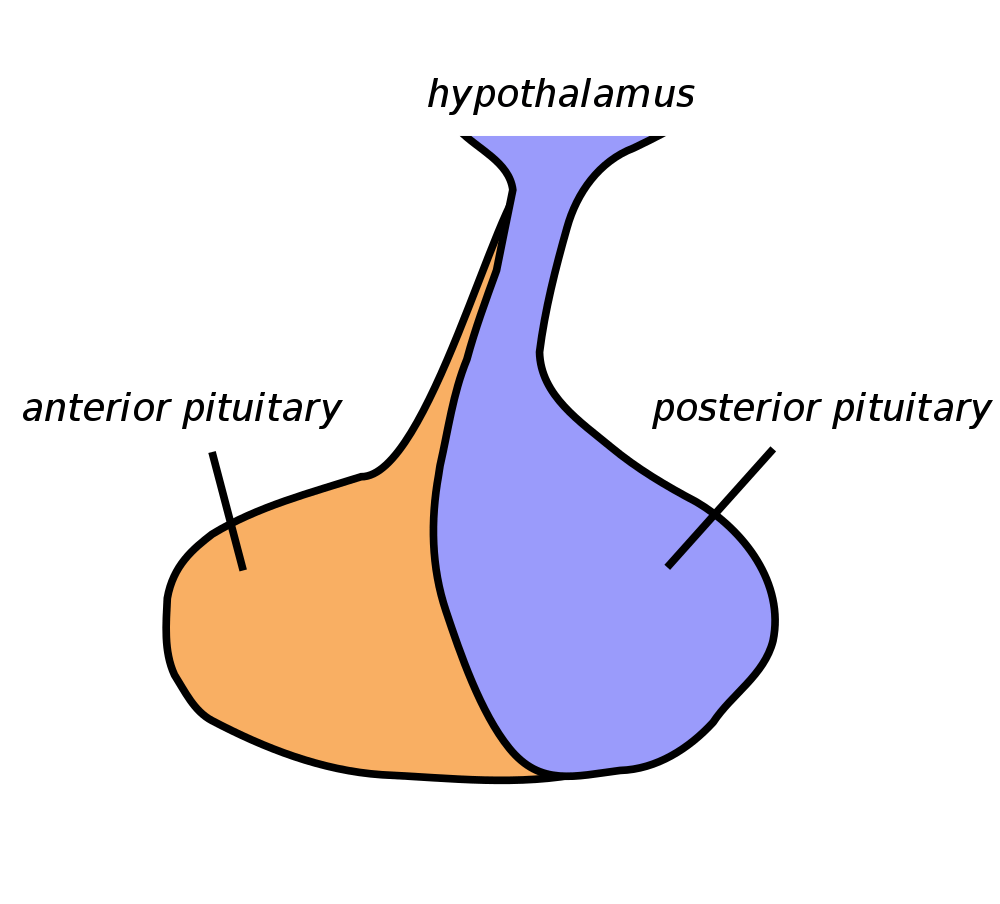 The largest part of the pituitary is the frontal lobes, which makes up 80% of the gland’s weight. It is connected to the hypothalamus by a few nerves and blood vessels.

The pituitary produces Follicle Stimulating Hormone (FSH), which affects the sex organs. It is used in fertility treatments for people who are having trouble reproducing.

Size: 18mm
Average weight: .5 grams
Location in the brain: part of the brainstem 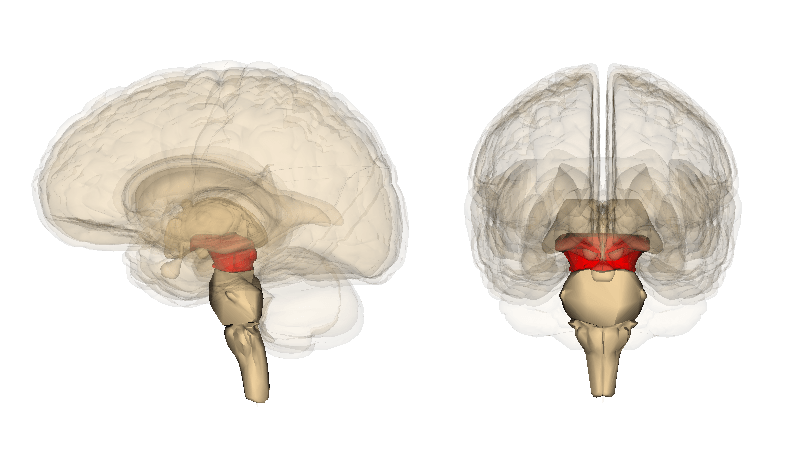 This small but complex part of the brain plays a role in relaying visual, auditory and other sensory information between parts of the brain. It is divided into three sections with their own responsibilities, and each of those sections is further divided with their own responsibilities. One function is to coordinate the images the left and right eyes record individually, and makes sense of them so that you perceive depth and can identify size and distance.

Neurobiologists use owls to study midbrain function in an attempt to understand how it works in humans. 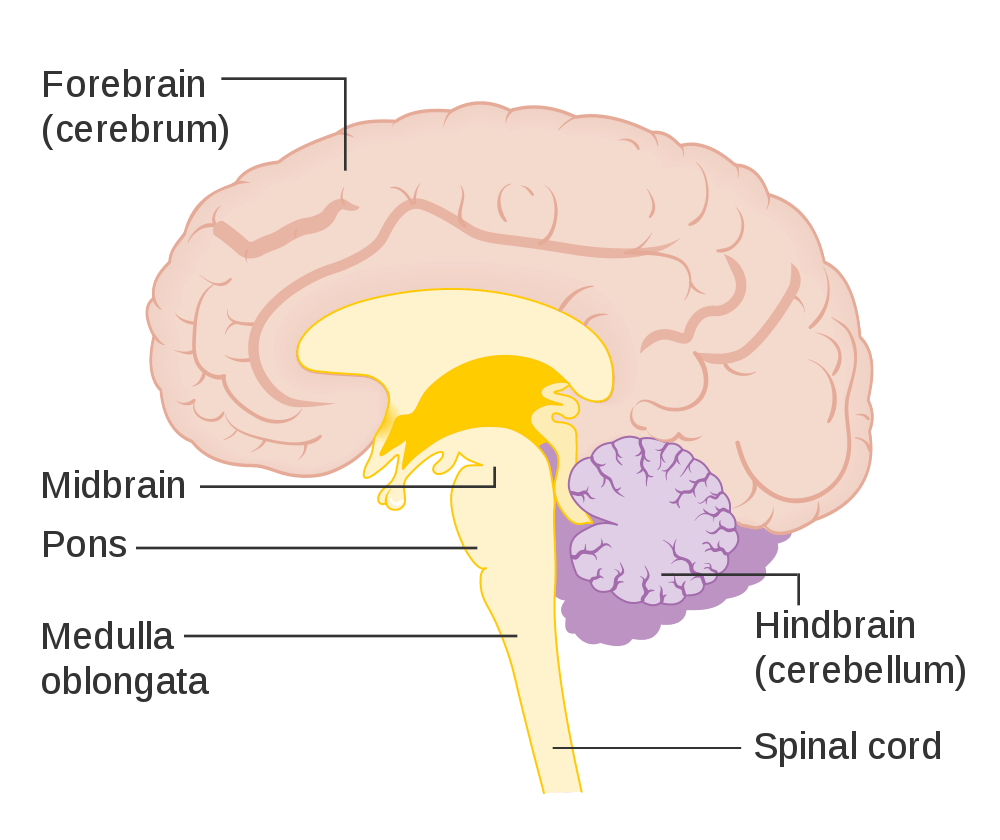 The brainstem connects the spinal cord with the brain. As such, all sensory and motor sensory information regarding the body passes through this part of the brain. It is involved in cardiovascular regulation, respiratory function and regulating the sleep cycle. The pons, midbrain and medulla oblongata are located on the brainstem.

The brainstem also connects the nerves and blood vessels of the cranial region to the brain except for those involving vision and smell. So then, the brainstem is important to your ability to hear, stay balanced and taste.

Even slight damage to the brainstem can cause serious physiological problems.

Size: 3 cm
Average weight: 1g
Location in the brain: anterior to the pons atop the brainstem 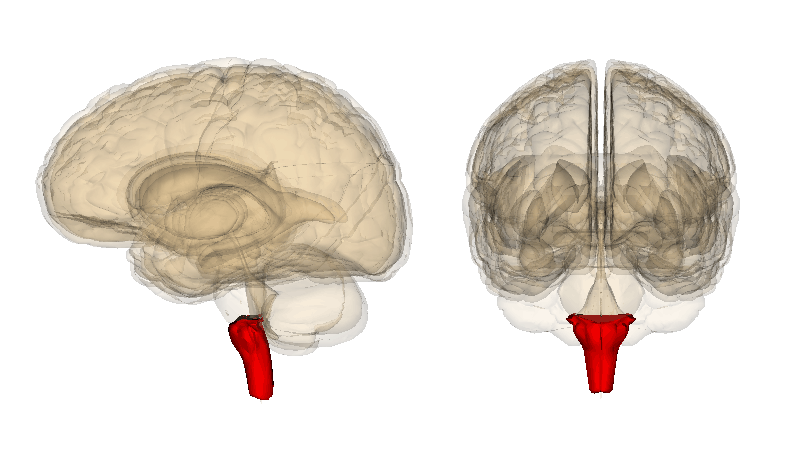 This organ’s primary function is to regulate involuntary functions, part of the autonomous nervous system. It controls:

It links the brain with the spinal cord through the brain stem. The brain is then able to receive and process sensory information from the body. Without many of the functions it controls, we wouldn’t be able to live, so then there’s a good argument for this being the most important part of the brain.

Most animals have a well-developed medulla oblongata. In some animals, it is the largest part of their brain.

Size: 4 cubic cm
Average weight: 1,400 g
Location in the brain: above the pituitary gland in the center of the brain below the cerebrum 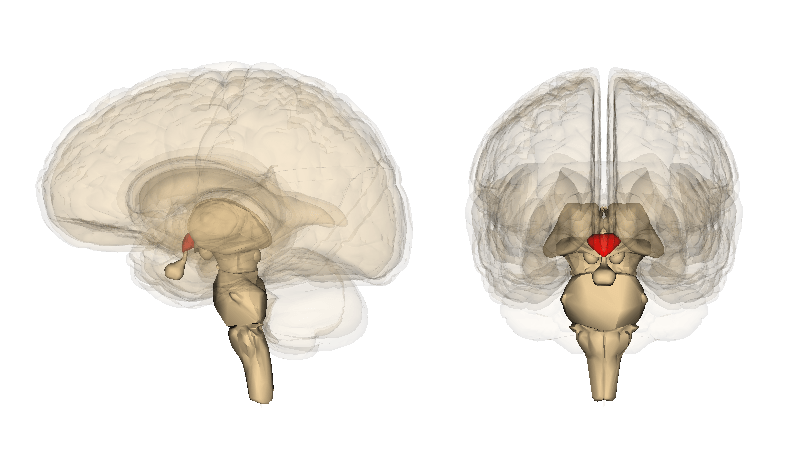 If the pituitary is the “master gland” because it controls all glandular function, what does that say about the hypothalamus, which controls the pituitary?

The hypothalamus is made of three sections, each with their own responsibility for bodily functions.

A malfunctioning hypothalamus can cause a kind of diabetes unaffected by blood sugar levels.

Size: 2 in.
Average weight: 1,400 g
Location in the brain: atop the brainstem 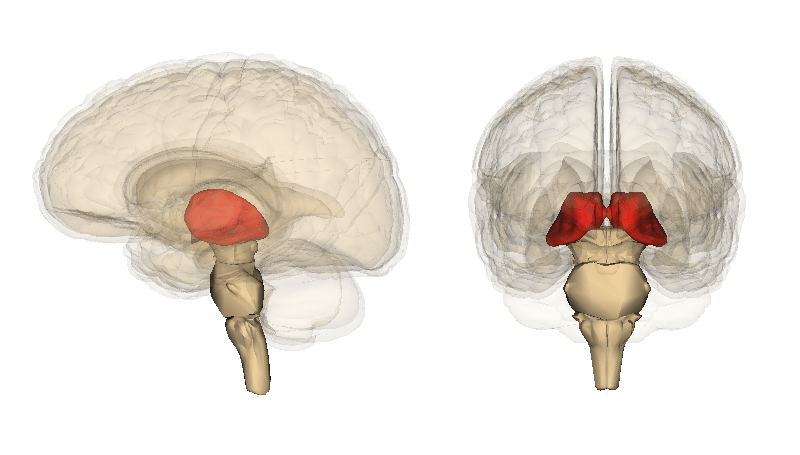 Think of the thalamus like an air traffic controller, except instead of directing air traffic, it sends sensory input to the proper place in the brain. The brain can then decipher the sensory information so that the body can react properly. Without it, you would not be able to use your senses. The thalamus also plays a role in memory processing and sleep/wake cycles.

The thalamus is split into two halves, each with a separate role in body function regulation. The halves are separated by one of the ventricles.

The thalamus doesn’t send all the sensory information it receives to the brain. It makes a determination on what is important and what isn’t. How it performs this is not well understood currently.

Size: 10 mm
Average weight: .07 ounces
Location in the brain: underneath the cerebellum 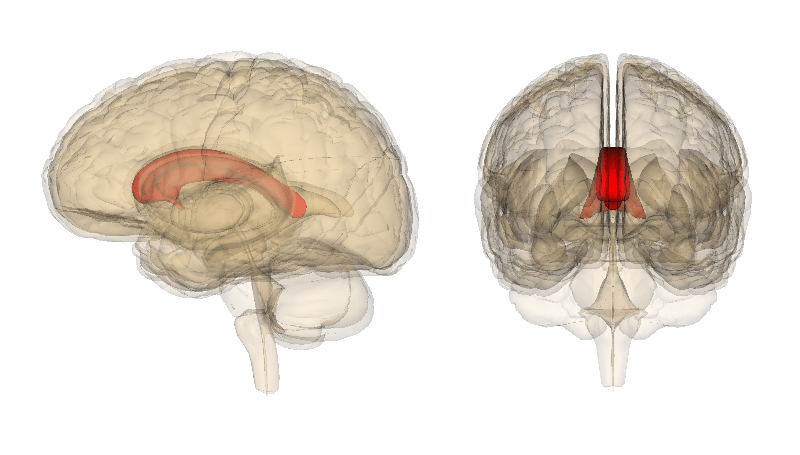 This part of the brain coordinates activities between the left and right sides of the cerebrum. It is comprised of over 200 million nerve fibers.

The left and right hemispheres control different functions and have different purposes. However, those hemispheres must coordinate to make your body work as it should. For example, it coordinates visual information with the language center in the brain so that you can identify whatever it is you are looking at.

The purpose of this organ was not understood until Dr. Roger Sperry performed an experiment. He examined patients who had their corpus callosum split due to surgery. He discovered that the two hemispheres had different functions and reasoned that the corpus callosum coordinated those functions. 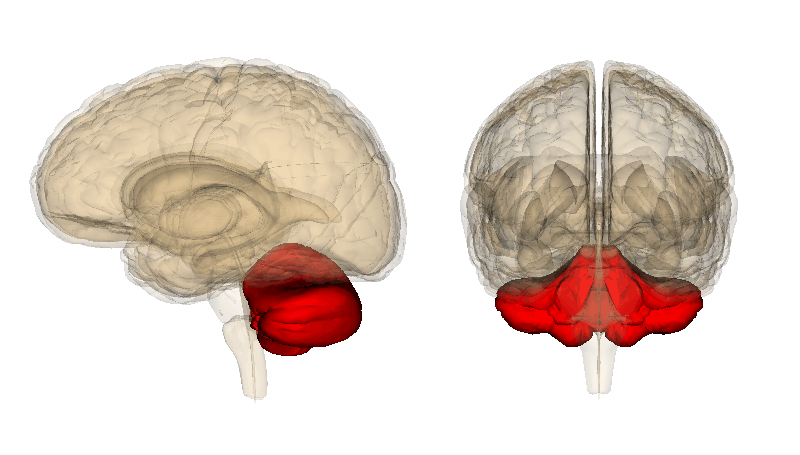 This is the part of the brain most responsible for motor functions. It does not actually direct muscles to contract, but it does coordinate movement, accuracy and timing. So then, it works directly with the thalamus for intentional actions and the medulla oblongata for involuntary reactions. It receives information from the sensory organs and then tells the muscles what to do.

Like the cerebrum, the cerebellum is divided into two hemispheres. It is made of several layers of tissue and has a relatively large surface area packed into a small space. 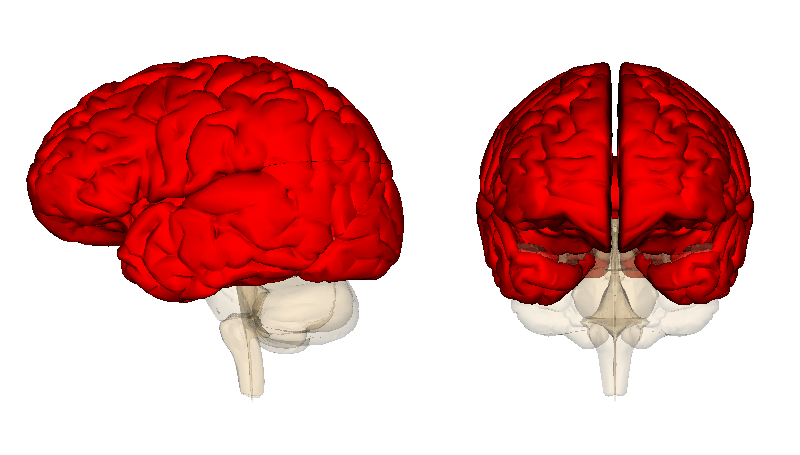 The cerebrum is the largest part of the brain. It controls our voluntary actions and the higher order functions that separates humans from lower animal species. It is responsible for our ability to reason, to remember things and to plan. The surface of the brain, the cerebral cortex, is where all the processing of the cerebrum happens.

The average human brain weighs around 3.3 lbs. The cerebrum weighs about 2.85 lbs. which is 85% of the brain’s weight.