Wildfires are described as uncontrollable fires that burn through vegetation, and often, through rural areas as well. The US and its citizens have seen their fair share of wildfires throughout the years.

In fact, it might be impossible to determine exactly how many wildfires there have been.

Although wildfires are more manageable with modern fire prevention techniques and countermeasures, there’s still only so much that humans can do against the climate. As the world becomes hotter and drier, there could be more wildfires to come.

Thousands of wildfires have passed already but these 8 are by far the biggest in the history of the US. Believe it or not, not a lot of wildfires are caused by humans. The Yacolt Fire holds the distinction of being one of the few large wildfires in US history that were the result of human carelessness.

Also known as the Yacolt Blaze, it started after a group of buys burned a nest of hornets near Eagle, Creek Oregon. The strong winds blew embers from the fire which then hit a build-up of slash that had not been properly burned off by loggers for two consecutive fires. Other accounts blamed lightning and careless campers as the start of the fire.

Congress immediately called for legislation to prevent such large-scale fires from happening again after the Yacolt Burn. Since then, logging activities are heavily regulated under the Yacolt Burn Rules. 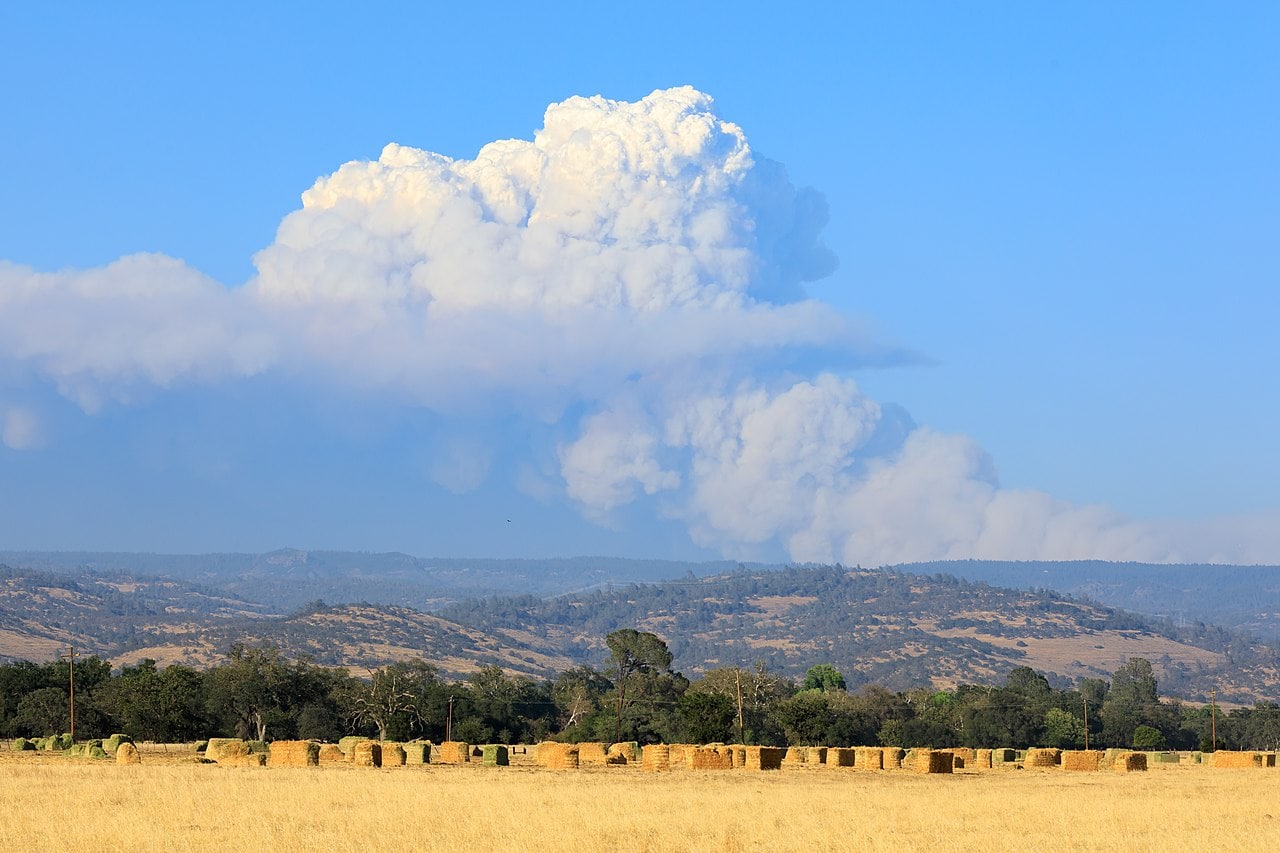 The Dixie Fire is named after Dixie Road, which is where the fire started in Butte County. There were a lot of factors that contributed to the strength of the fire, For starters, 2021 saw what was the hottest summer in the history of California. It was also discovered as the most extreme megadrought in the area in at least 1,200 years.

Lastly, millions of trees in California suffered from bark beetle infestations at the time which made them more susceptible to fire.

The main source of the fire, as per the CalFire was “a tree contacting electrical distribution lines owned and operated by Pacific Gas and Electric (PG&E) located west of Cresta Dam.” The fire ravaged a lot of properties which is why it’s one of the most expensive wildfires in US history.

Although the fire took only the life of one firefighter, it still burned through a total of 1,329 establishments in the affected area. Thumb, Michigan was forever changed on Sept. 5, 1881, after the event that’s now called the Thumb Fire. The wildfire is set to have been brought about by dry summer conditions and the drought. After the fire, the flames produced so much soot and ash that it turned the sky into a yellowish color.

Apart from the damage that ravaged over 1,000,000 acres of land, the wildfire also changed Thumb, Michigan in many ways. After it, people in the surrounding area became more organized regarding their firefighting plans.

This eventually led to the formation of the Northern Forest and Protection Association which helped managed fires in Michigan.

The American Red Cross foundation was founded the same year as the Thumb Fire. Their first official disaster relief operation was to provide assistance to the victims of the fire. 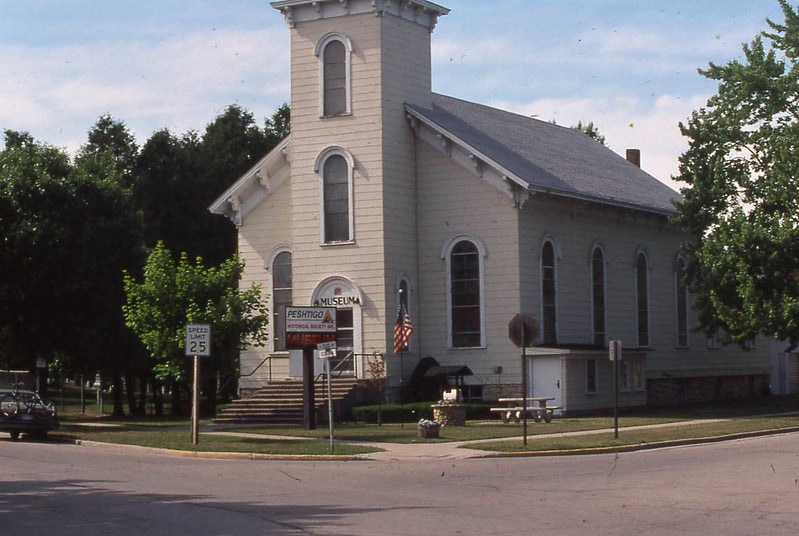 When historians are asked about historical wildfires on Oct. 8, 1871, they’ll mostly talk about the Great Chicago Fire. However, the deadlier fire that occurred that same day was the Peshtigo Fire. The fire was caused by tiny embers from agricultural machinery caught up in drafts during high winds during that dry day.

Although the fire raged through northeastern Wisconsin, most of the fire was situated in Peshtigo with a population of 1,700 residents.

It remains to be one of the deadliest wildfires in US history. Although the death toll is debated to this day, rough estimates suggest that the fire killed more than 2,200 people.

Being the small town that it is, the governments and social institutions were focused on the victims of the Great Chicago Fire. Helped arrive in Peshtigo a day after the fire. By the time word of the fire got around the surrounding counties, most of the help was already on the way to Chicago.

The county established the Peshtigo Fire Museum just west of Highway 41. The museum features artifacts and items from the fire and its victims. 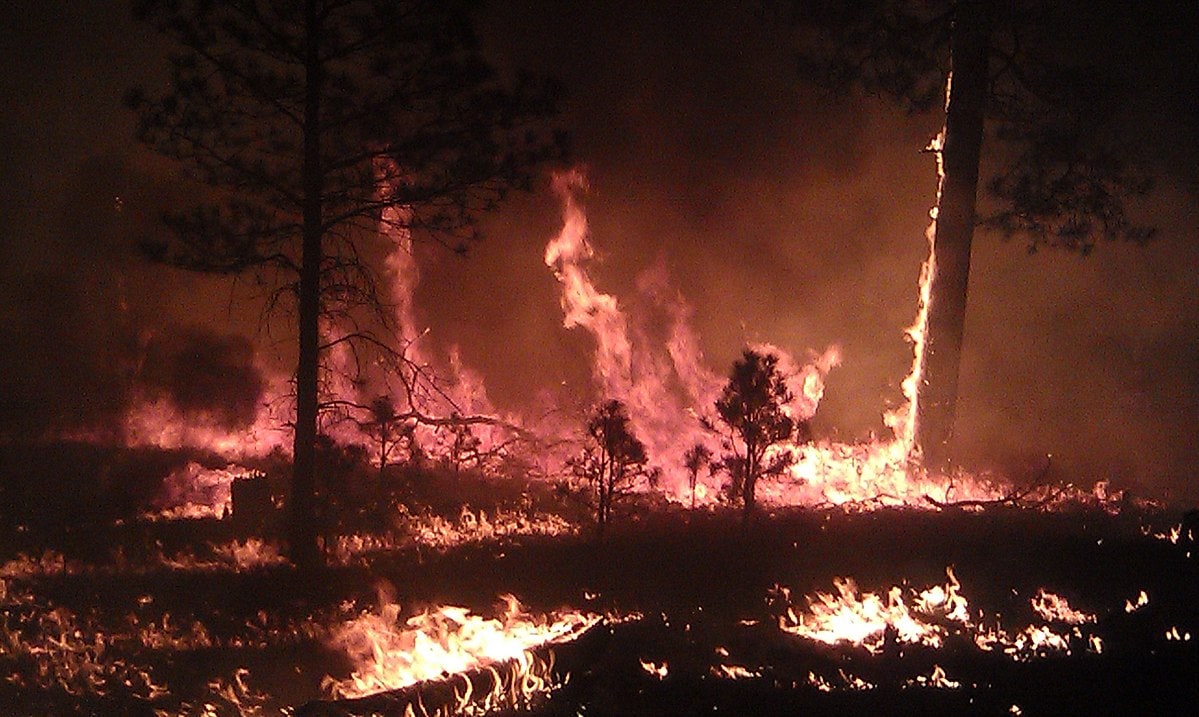 When it happened, the Alaska Taylor Complex Fire became the largest wildfire on record in the US. It may not have burned a lot of buildings and properties but it did take out a lot of unused land between Alaska and Canada.

Due to the strength of the uncontrollable flames, the fires went on for months.

The Alaska Taylor Complex is also the most significant fire to occur during Alaska’s record-breaking 2004 fire season. In total, the season burned up to 6.6 million acres of forests. Nearly a quarter of that came from the Taylor Complex Fire alone.

As per reports, the fire began from lighting strikes and was further fueled by one of the driest and hottest summers on record in Alaska at the time.

“Complex” fires refer to two simultaneous fires happening close to one another. In cases like these, firefighters need to approach the fire under a unified command. 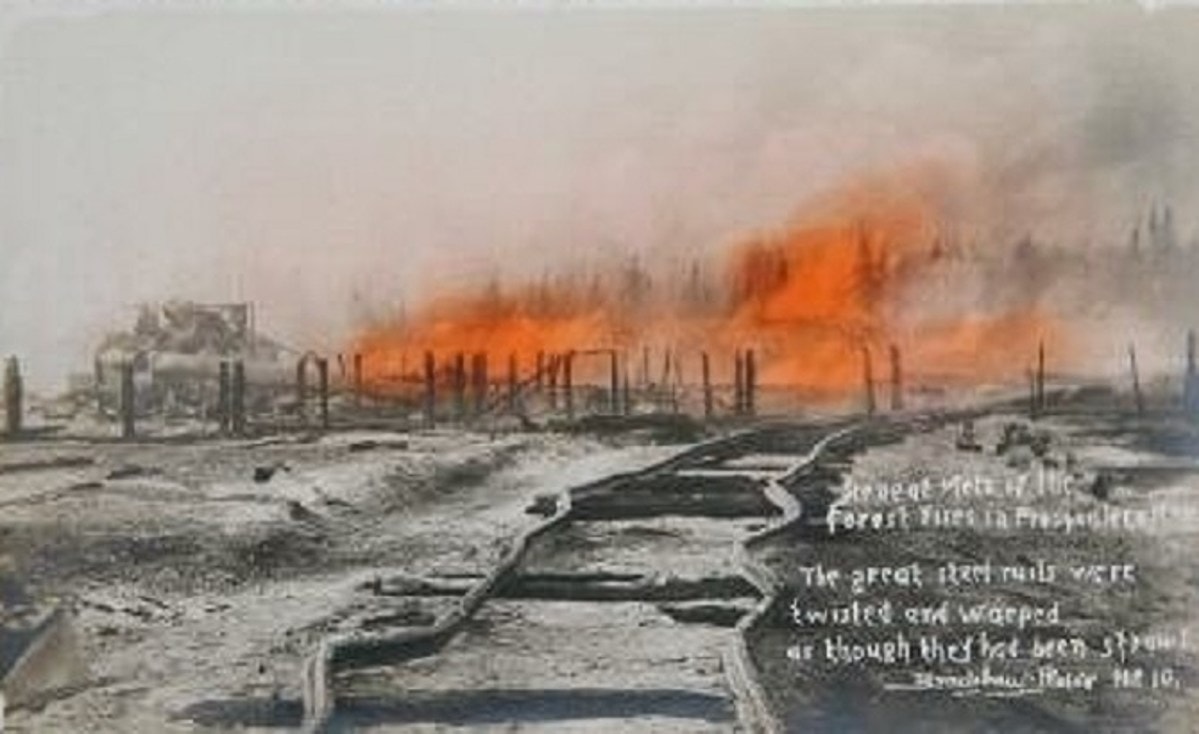 In a span of three days, the state of Michigan experienced simultaneous forest fires that were possibly caused by the hot and dry weather.  Many believed that the same winds that fanned the flames were the very same ones that caused the Great Chicago Fire, the Peshtigo Fire, and the Port Huron Fire.

The consequences of the Great Michigan Fire were long-lasting. The land was left burnt and barren. Aside from that, thousands of buildings were also burned to the ground. To make matters worse, the fire took out most of the trees so there was no lumber left to rebuild. By the end of the fire, countless families were left homeless.

In 1884, some suggested that the Great Michigan Fire was caused by debris and methane from Comet Biela. However, this theory is yet to be proven and it’s not likely as well considering that comets are too cold when they reach the earth’s surface. 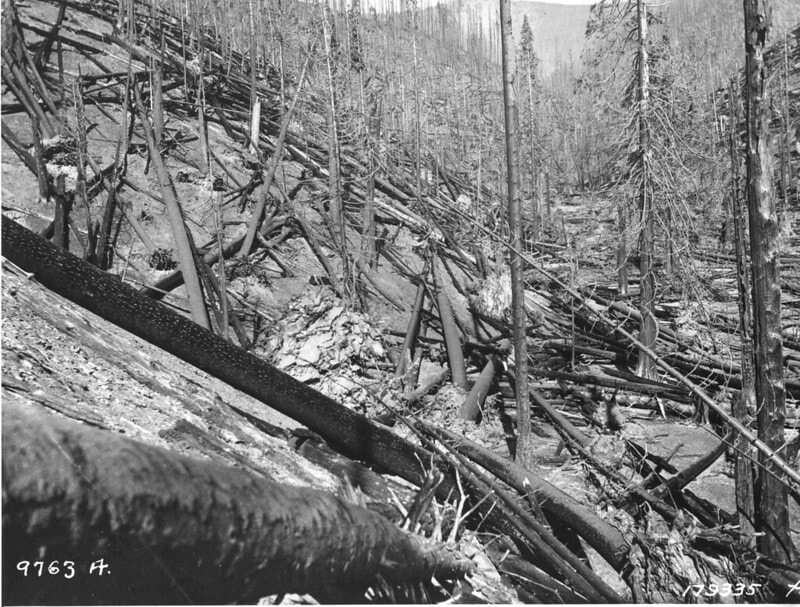 The Great Fire of 1910 is also called the Big Blowup or the Big Burn. The fire ravaged lands in North Idaho and Western Montana. There were minor extensions of the fire in Eastern Washington ad Southeast British Columbia.

Although the cause of the fire is unknown, the flames were supposedly worsened by strong winds. These created smaller fires, eventually creating a firestorm of unprecedented size. The majority of the casualties in the fire are firefighters who responded to the wildfire.

The U.S Forest Service was greatly revered for its response to the fire. Congress even doubled the budget of the agency to further support them. This marks one of the biggest steps towards the firefighting efforts of the agency and would soon lead to the development of early wildlife prevention and suppression strategies.

The Great Fire resulted in the creation of the Weeks Act which encouraged cooperation among federal, state, and private agencies to combat wildfires. The act is estimated to have saved nearly 20 million acres of land and counting. 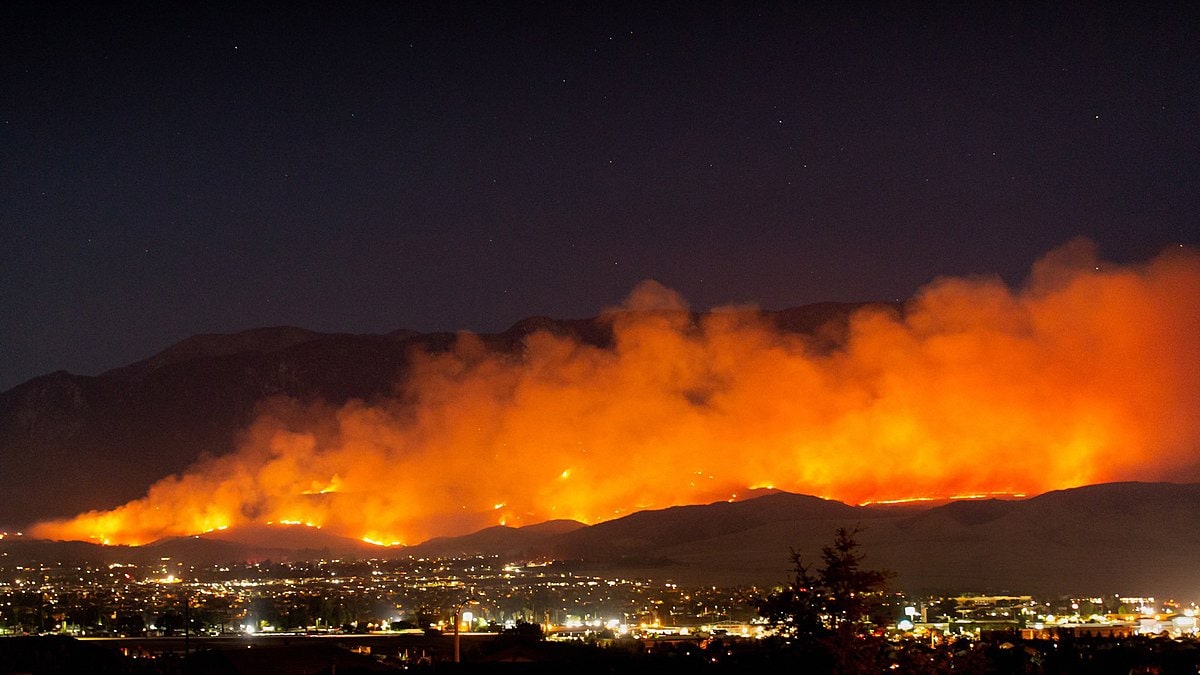 California experiences dry and hot climates majority of the year. It’s why a lot of wildfires actually happen in the state. The 2020 California wildfire season is the largest wildfire in U.S. history. It was a bad year for California as it was a record-setting one with regard to wildfires.

Mid-2020, California Governor Gavin Newsom declared a state of emergency in California as the state was being overwhelmed by numerous cases of wildfires. On Aug. 19, fire prevention agencies all over the state were battling 367 wildfires which were caused by thunderstorms mostly.

By the end of 2020, California experienced a total of 9,917 wildfires across the state.