The universe is massive. There’s so much of the universe we can only speculate about. Astronomers are certain of one thing, that we can only see a percentage of what is out there, and we can only understand about 4% of what we can observe. Among that 4% is of course stars, the large balls of superheated helium gas like the one our planet revolves around. 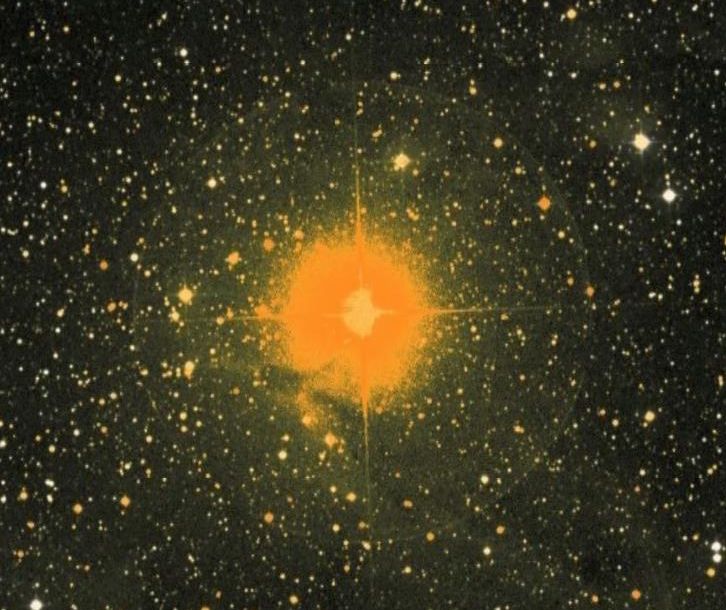 Mu Cephei is located in the Cephus constellation and it is a red hypergiant. It is one of the largest stars visible to the naked eye, one reason it was discovered by early astronomers. Modern astronomers have determined that the star is surrounded by a gaseous outer shell and a ring of stellar dust still further away from the star’s inner radius. Most estimates believe the star is in the final phase of evolution and will go supernova relatively soon (in cosmic terms).

Mu Cephei is considered a runaway star. Runaway stars move faster than expected given what we know about stellar orbits. The star may have been ejected from its star system. 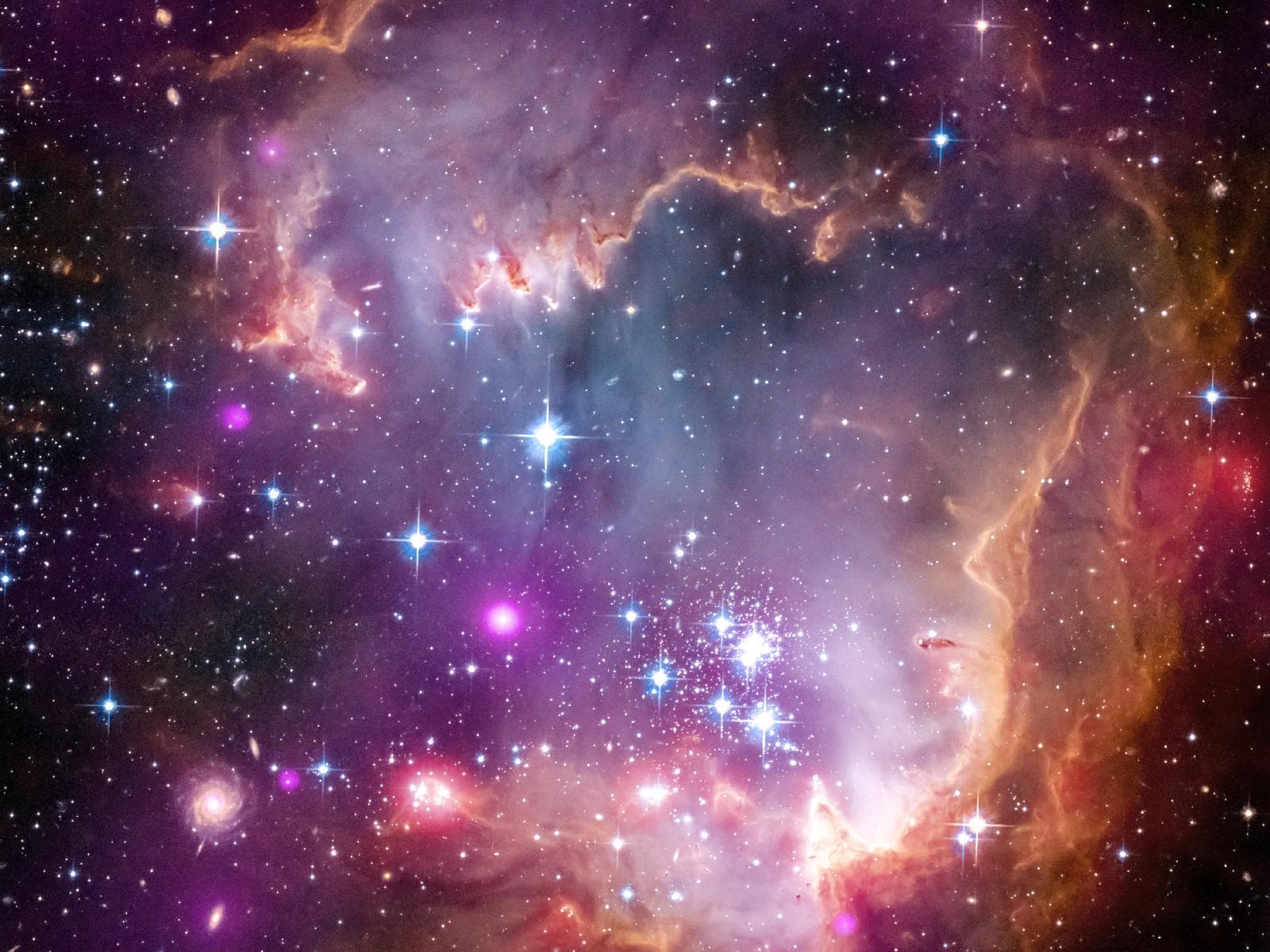 This is the largest visible star in the Small Magellanic Cloud (SMC), a small dwarf galaxy near the Milky Way. It is the second largest extra galactic star observed to date and the furthest red supergiant observed. It is estimated to have a temperature of 3,575 K and to be 250,000 times as luminous as the Sun. Little else is known about the star aside from its size and its classification as a red supergiant.

If this star sat in our solar system in place of the sun, the outer shell of the star would swallow Jupiter. 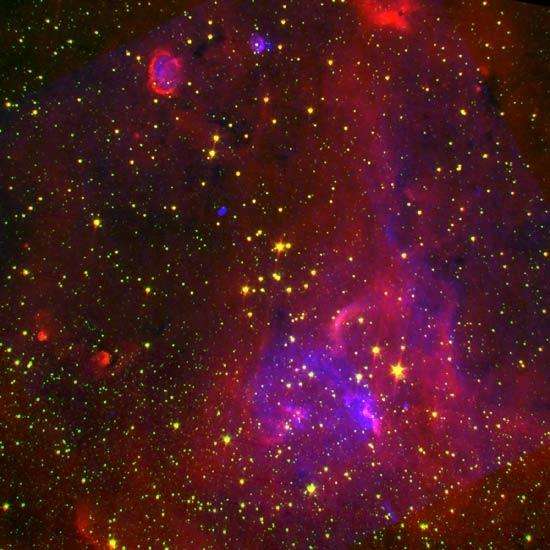 The RSGC1 is a cluster of red supergiant stars located 6.6 kiloparsecs (kpc) from our sun. It is in one of the spiral arms of the Milky Way. It is among a group of 16-20 red supergiants of relatively similar size and mass. The F-01 is considered the largest.

These stars are not detectable by visible light as they are obscured.

Red supergiants are among the largest celestial bodies yet discovered. Astrophysicists theorize these stars are on the verge of exploding (going supernova). Given their distance, they may already have exploded. We won’t know for at least 50,000 years. 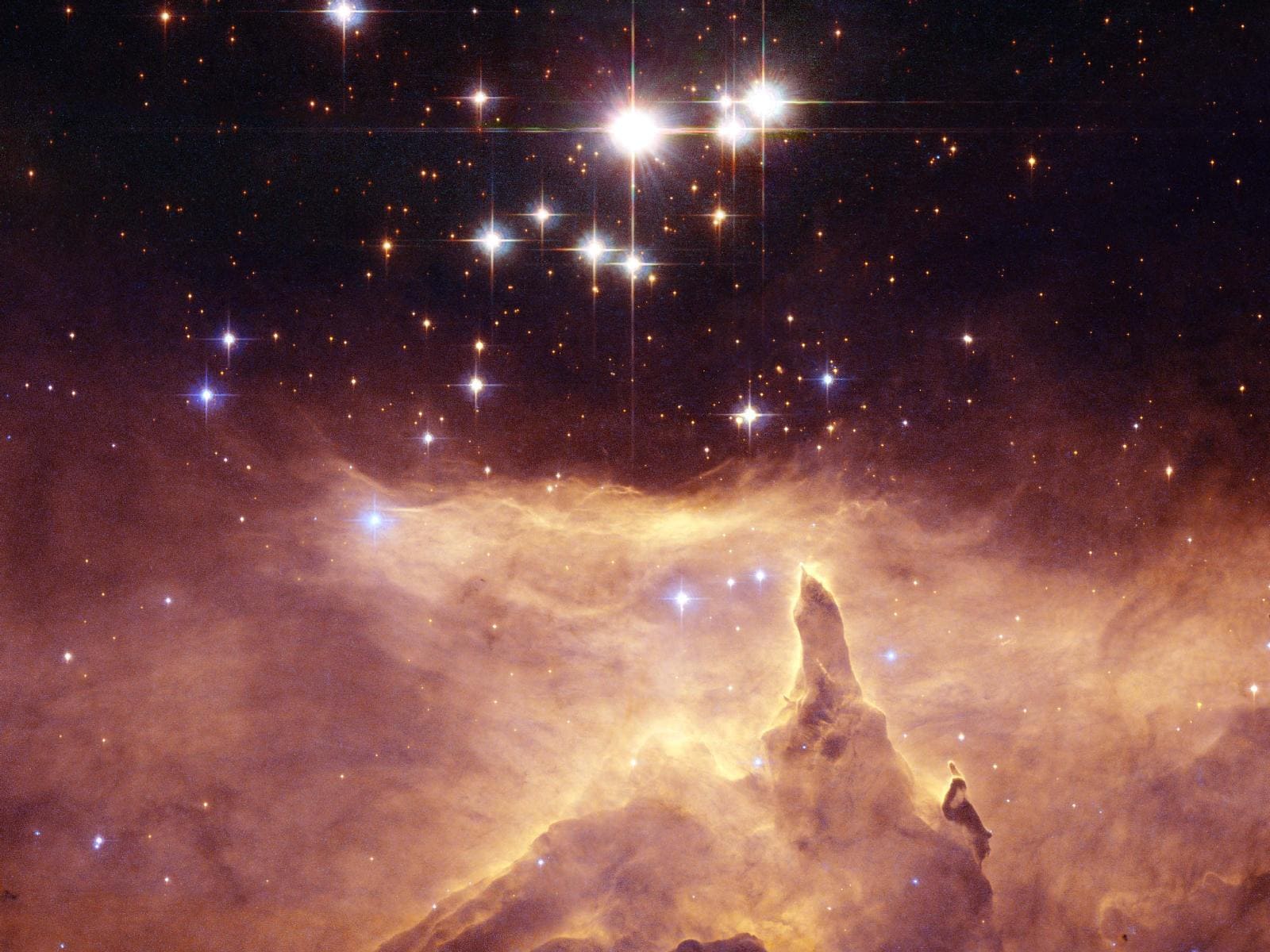 AH Scorpii is a pulsating, semiregular variable star found in the Scorpius constellation. It is located 2,611 parsecs from the Sun. a semiregular variable star changes its luminosity periodically. The AH Scorpii variable period over which it changes lasts 6 days and is stable for 741 days. Astronomers do not know what causes the pulsations currently. It is theorized that the variations occur because of materials being added to or subtracted from the star.

The “AH” doesn’t stand for anything, it is a designation given to all in the same class of variable stars. 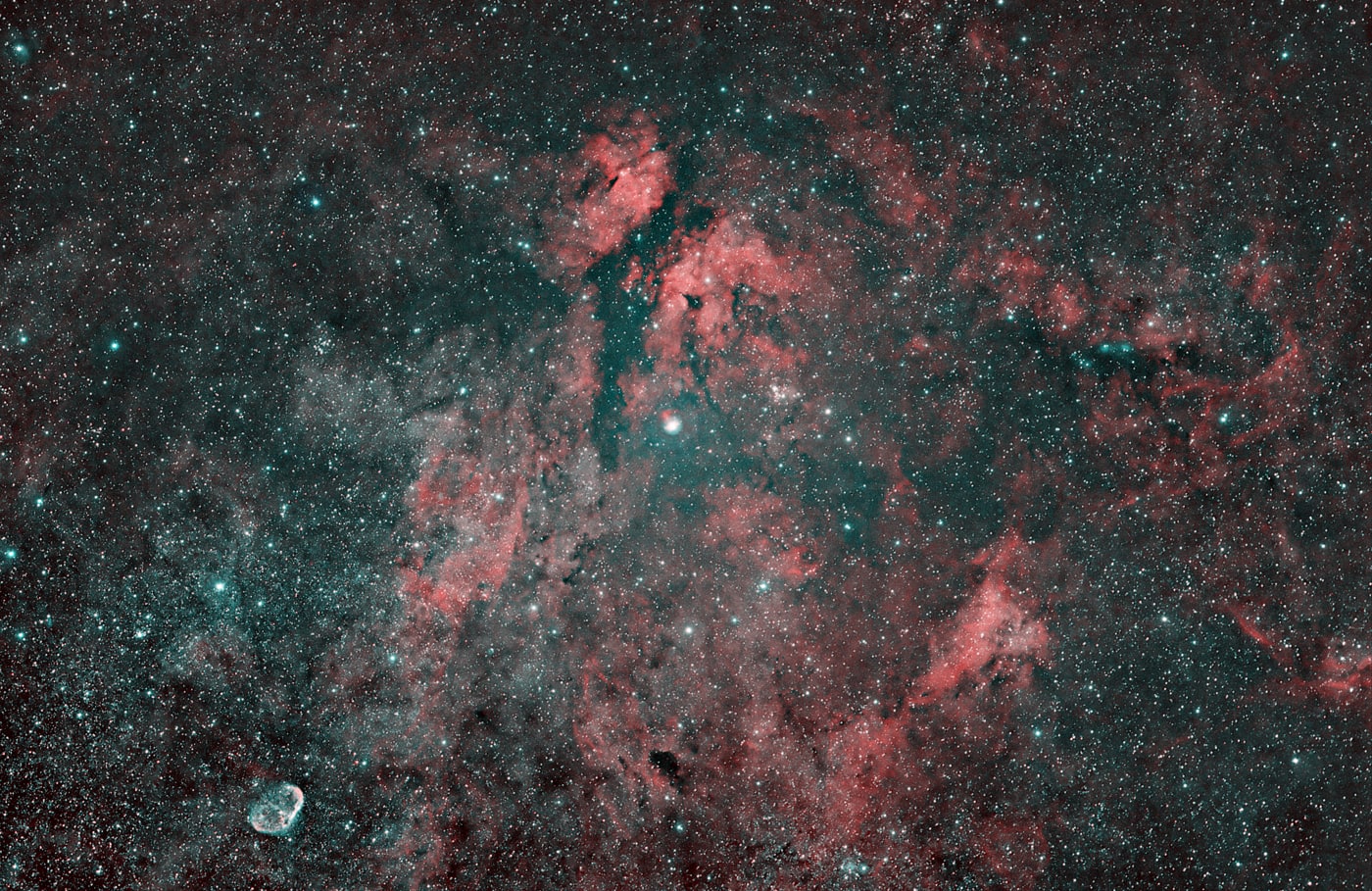 KY Cygni is a red supergiant in the Cygnus constellation. It is luminous, but cool at 3,500 degrees Kelvin. It is also losing mass at a rapid rate. The star has a powerful stellar wind that is the cause of the loss in mass.

KY Cygni is 1.6 parsecs from the sun. It is too faint and far away to see it with the naked eye. It may be difficult even with the telescope given the amount of infrared light it emits.

Cygni is considered to be very near extinction based two factors, on the amount of red light it emits and the rate at which it is losing mass. 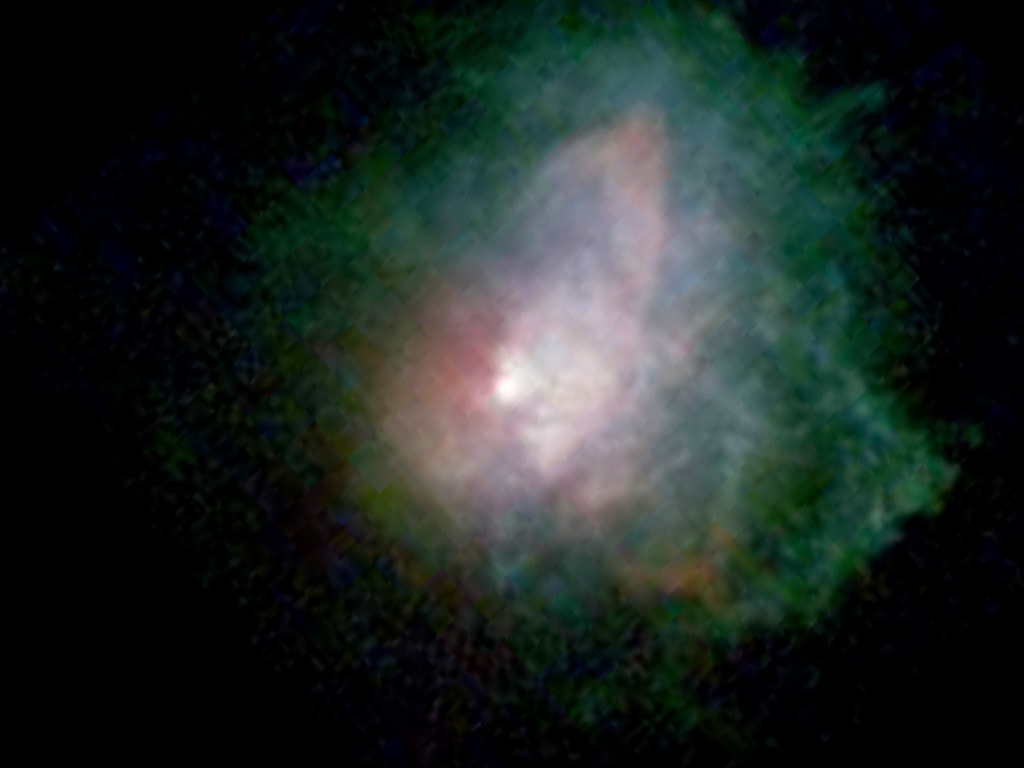 VY Canis Majoris is a red hypergiant located in the Canis Major constellation. It is, like other stars of this magnitude and luminosity, a star nearing extinction. It is showing the signs of mass loss typical of a star in this stage. The mass loss causes the star to be obscured by dust, gas and other substances. It is also a variable star with a pulsation period estimated to be around 1,000 days.

It would take you six hours to complete one orbit of the star when travelling at the speed of light. 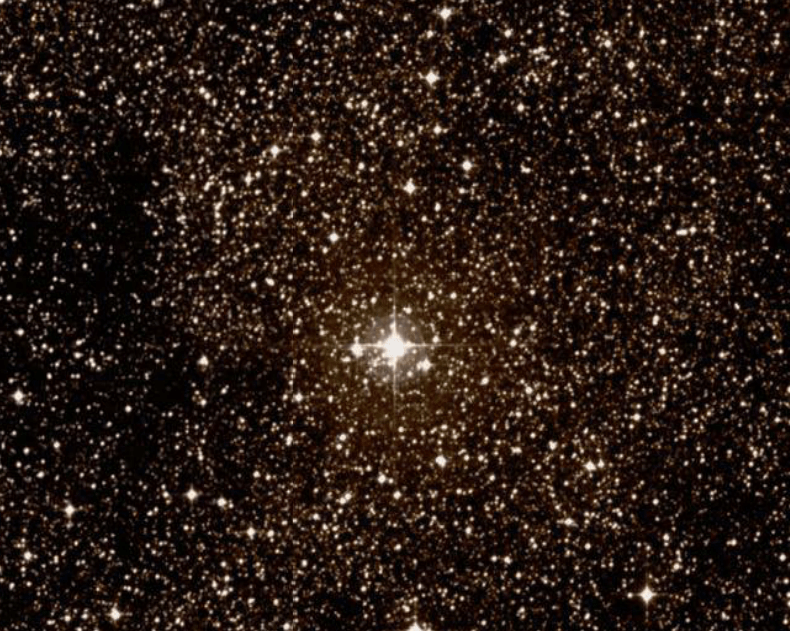 This star is another red supergiant. It’s located in the constellation Norma. Like the other red supergiants nearing extinction, it is losing mass rapidly. Astronomers calculate that the star is a hot 3,570 degrees K. It’s the second brightest star its cluster with a luminosity of 300,000 times brighter than the Sun. It is 2 kpc from our sun.

Some believe that this star may in fact be a binary star system; however, there does not appear to be the evidence to support this. 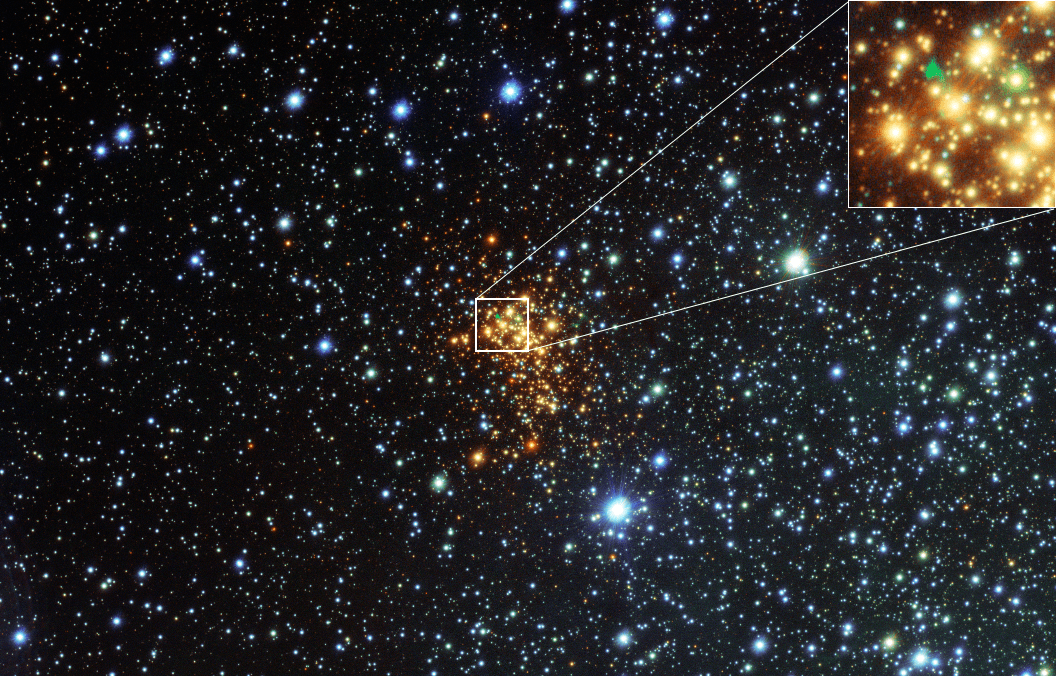 This red supergiant is part of the Westerlund star cluster. Its luminosity and temperature places it within the luminous cool supergiant category, and it is one of the most luminous stars of its kind. It is approximately 380,000 times brighter than the Sun.

In 2013, astronomers discovered that Westerlund 1-26 is surrounded by ionized gas forming an ionized nebula. An ionized nebula that surrounds a star near extinction like a red supergiant is created as the star loses mass (made of its outer core). The heat from the star’s inner core ionizes the molecules expelled. 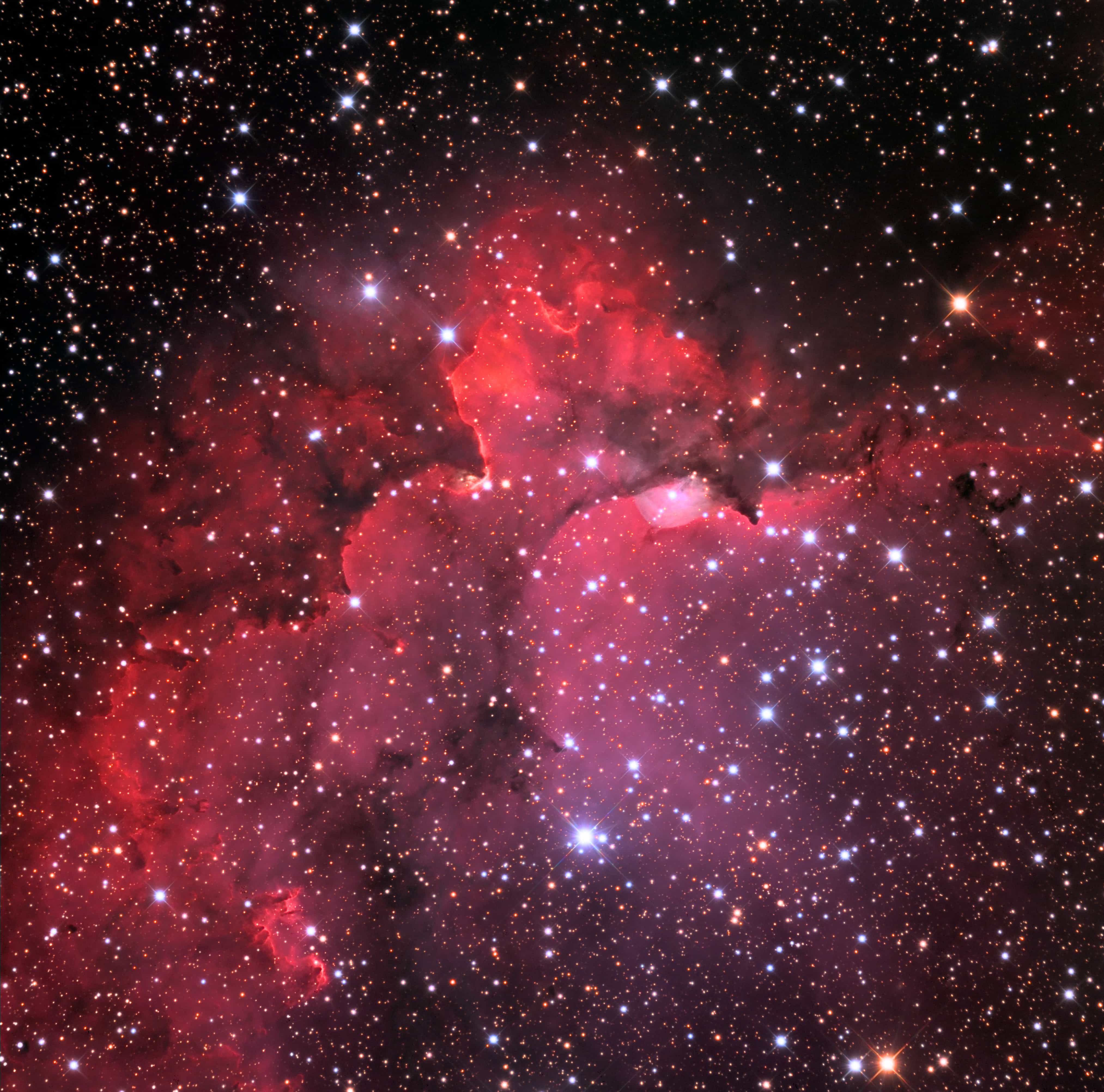 RW Cephei is an orange hypergiant in the constellation Cephus. It is approximately 4,000 parsecs from the Sun. It is a semi regular variable star. Its period is estimated to be 346 days according to some observers. The variance of luminosity and temperature places the star either in the red supergiant or yellow hypergiant category depending on the period. The star can be as hot as 5,000 degrees K with a luminosity 550,000 times brighter than the Sun.

If RW Cephei was in our solar system, it would be as wide as the asteroid belt between Jupiter and Mars. 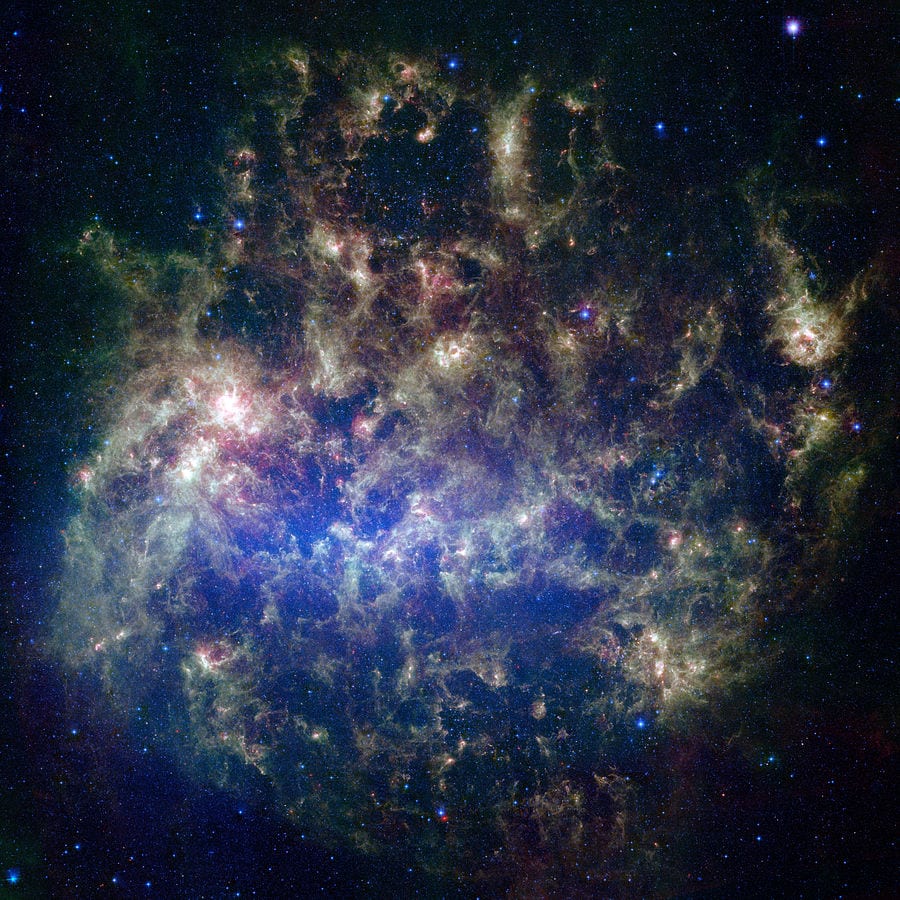 WHO G64 is a red hypergiant found in the Large Magellianic Cluster (LMC) of stars in the Dorado constellation. It is one of the most luminous and massive of its kind. It is extra-galactic, meaning it is outside the Milky Way, where the LMC is a satellite galaxy of the Milky Way.

The star exhibits some characteristics uncommon to red hypergiants, such as the massive cloud of interstellar dust surrounding it. That cloud, or disk as astronomers describe it, is itself a light year in diameter, and the disk’s inner edge is 15 solar radii from WHO G64.

Scientists estimate that the star has loss a third of its solar mass since it was formed. 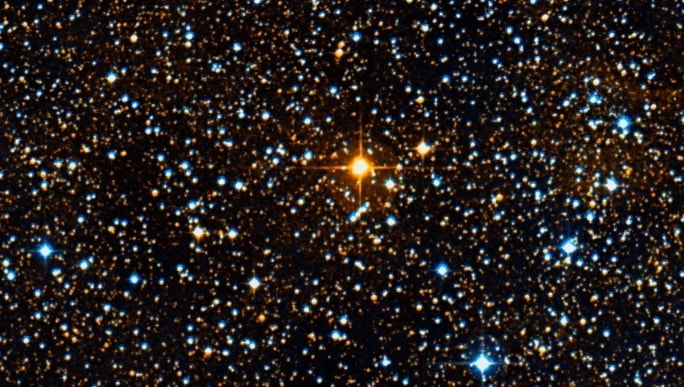 UY Scuti, located in the Scutum constellation, is currently believed to be the largest star in the universe based on estimates. It is a red hypergiant nearing the Supernova stage. The star is enshrouded by dust that it expels as it loses mass.

Scientists believe that the star is nearing the final stages before going supernova. It is fusing helium, which will cause the star to produce iron. The star will continue to heat the iron to upwards of 3 billion degrees F, causing the core to collapse, creating the supernova explosion.

Travelling at light speed, it would take seven hours to travel around the star.