While many people love keeping their hair long, plenty of others get irritated as soon as it grows past their shoulders. It takes an enormous amount of time and dedication to grow extremely long hair and care for it on a daily basis. However, that didn’t stop these people from doing their best to grow their locks as long as possible! 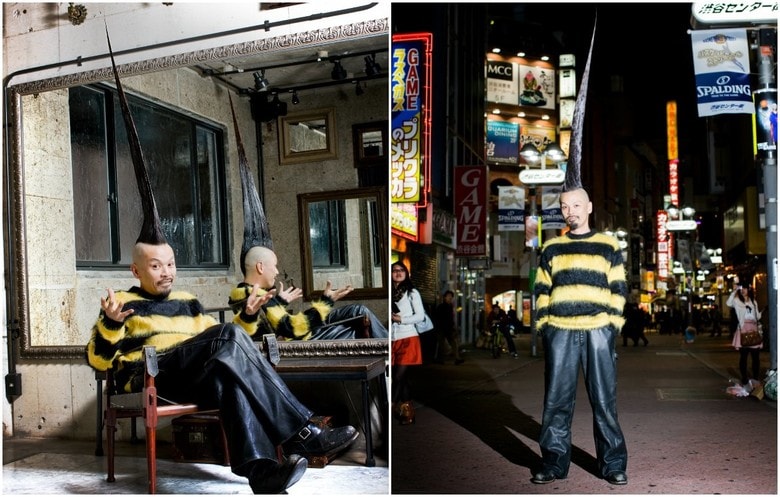 Designer Kazuhiro Watanabe dedicated 15 years to growing out his massive mohawk spike, which took three cans of hairspray and an entire large bottle of hair gel to hold up. His impressive hairdo broke the previous Guinness World Record by over a foot. His 10-year-old daughter never saw the spike in person–only the pictures from the photoshoot when the record was set. However, she still announced that she planned to beat it one day!

Kazuhiro decided many years ago that he wanted to earn a place in the Guinness Book of World Records, and previously considered trying to beat the record for drinking the most hot sauce before he decided to go with his tall hairdo instead.

Without any products to hold it up in a spike, Kazuhiro’s hair hangs down to his knees. has been said to own “a little bit of everything.” 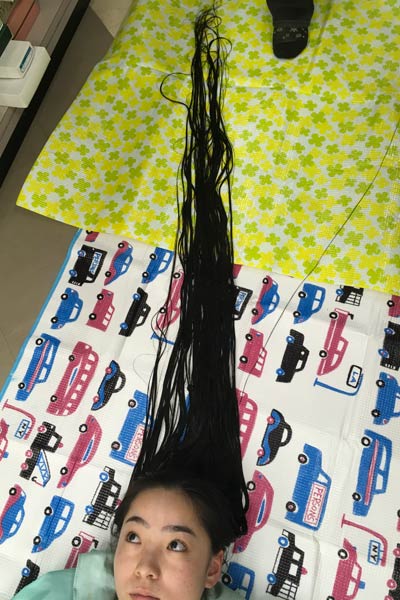 When Keito Kawahara was 17 years old, she heard about a new Guinness World Record for the Longest Hair on a Teenager and realized that hers was even longer! She’d never made any plans to beat the world record, yet she did so a mere four months after the previous record was set.

Keito had simply forgone haircuts for her entire life, enlisting her family’s help to wash and dry it before heading out for school each day. She also had to braid it before bed each night to avoid waking the next morning with unmanageable tangles.

Keito kept her record-breaking locks until she turned 18 and then cut it for the first time ever. 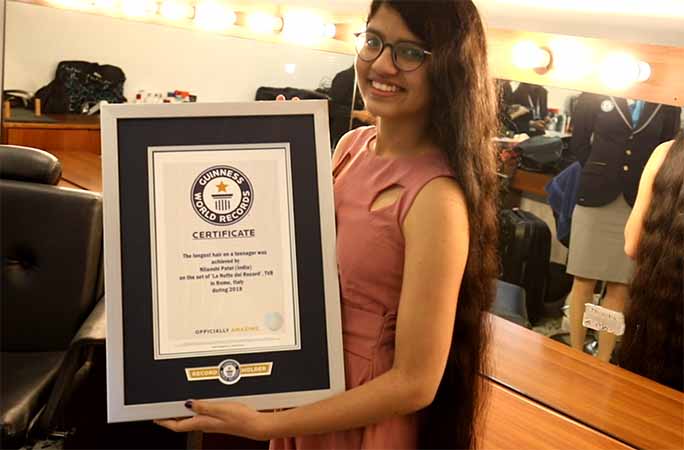 Nilanshi Patel sports a beautiful head of hair that reaches nearly six feet in length, making her the current record-holder with the title of Longest Hair on a Teenager. Nilanshi got a bad haircut 10 years ago that drove her to tearfully decide that she would forgo haircuts entirely. She’s been growing her tresses ever since!

Many people have questioned whether her long hair gets in the way of her daily life, but Nilanshi says that it doesn’t get in her way at all. She contains it in either a braid or a tall bun, preferring the latter for sports and other active tasks.

Nilanshi says that her long hair is a lucky charm. 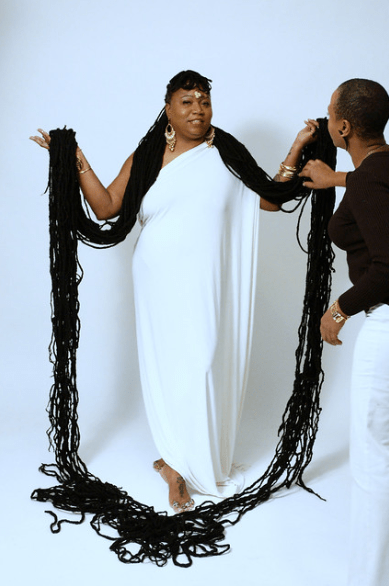 Asha Mandela has consistently held the world record for having the longest dreadlocks since 2008, proudly embracing the nickname of “Black Rapunzel”. Her achievement is especially impressive when you consider how much hair length is compressed to create dreadlocks: An unofficial measurement of one of her hair strands came to a jaw-dropping 55 feet and 7 inches!

Unfortunately, Asha has been cautioned against keeping her dreads so long, with doctors expressing concerns that the weight of them may have caused unhealthy curvature in her spine. Despite this, Asha says she wouldn’t dream of cutting them.

Asha began growing her dreads as a spiritual expression rather than a fashion statement. They regularly take six bottles of shampoo to wash, and take two days to dry!

Asha carries her dreads in a handbag when she wants to keep them out of the way. 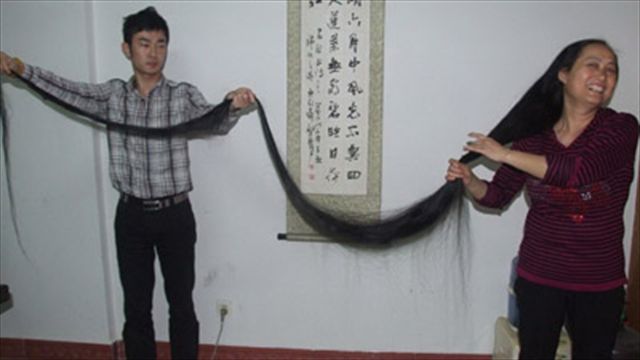 Jiang Aixiu went in for a haircut one day in 1990, only to have her hairdresser recommend that she keep it long since the quality was so nice. She took the advice to heart and did not cut her hair for over 21 years!

Jiang’s hair grows at an unusually fast rate of 7.8 inches every year, and it takes her around two hours to wash it all. She does not use any special hair products or eat a special diet to get her hair to grow so quickly. However, she was advised by doctors to cut it before too long, alongside claims that her hair would absorb too much nutrition and adversely affect her health.

Jiang’s hair is too long to wash at once, and she must clean it one section at a time. 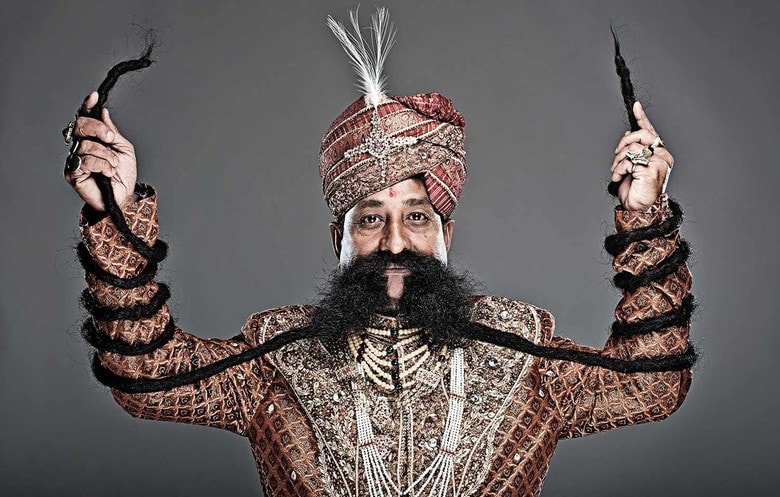 Long hair records aren’t just for the ladies! Ran Singh Chauhan sports a stunning moustache that he’s committed to growing for over 32 years. He began growing his moustache out of devotion and respect for Indian Rajasthani culture, and had no intentions of setting a world record.

Ran’s fantastic moustache has earned him several famous positions, including a part in the James Bond film “Octopussy” and a 30-year position as the brand ambassador for Rajasthan Tourism.

Ran’s moustache was first measured in Rome, Italy on the set of the TV show “Lo Show dei Record”. 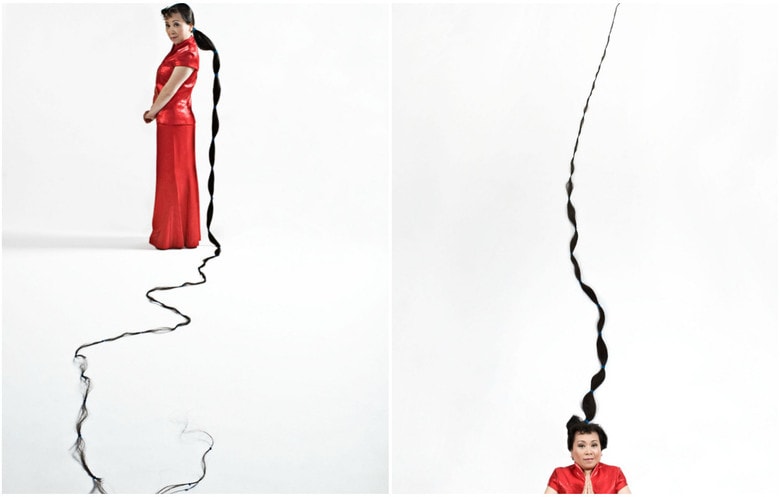 Xie Qiuping has the longest hair in the world. She has held the Guinness World Record since 2004 when her hair was officially measured, and she’s been growing it since 1973 when she was 13 years old.

Xie’s extremely long hair and grooming routine have become second nature to her. She says: “It’s no trouble at all. I’m used to it. But you need patience and you need to hold yourself straight when you have hair like this.”

When Xie does stand up straight, even on top of a tall step stool, her hair still trails over the floor! As with most of the record-holders on this list, washing her hair is an involved process that usually requires some assistance.

Xie’s hair is nearly as long as an adult giraffe is tall!