Cruise ships are becoming an increasingly popular way to see the world. Cruise ship tourism is up 18% since 2009 despite the recent problems. These problems included breakdowns, illness outbreaks and the threat of piracy. Industry experts expect 27 million passengers in 2018 and don’t foresee any diminishing numbers.

The ships themselves are becoming increasingly large to accommodate the growing interest. These large ships can bring interest as well given their impressive size. Their size provides room for all kinds of entertainment on board the vessels, from Broadway musicals to Olympic-size swimming pools. These ships are long, large in volume (gross tonnage) and hold thousands of people. 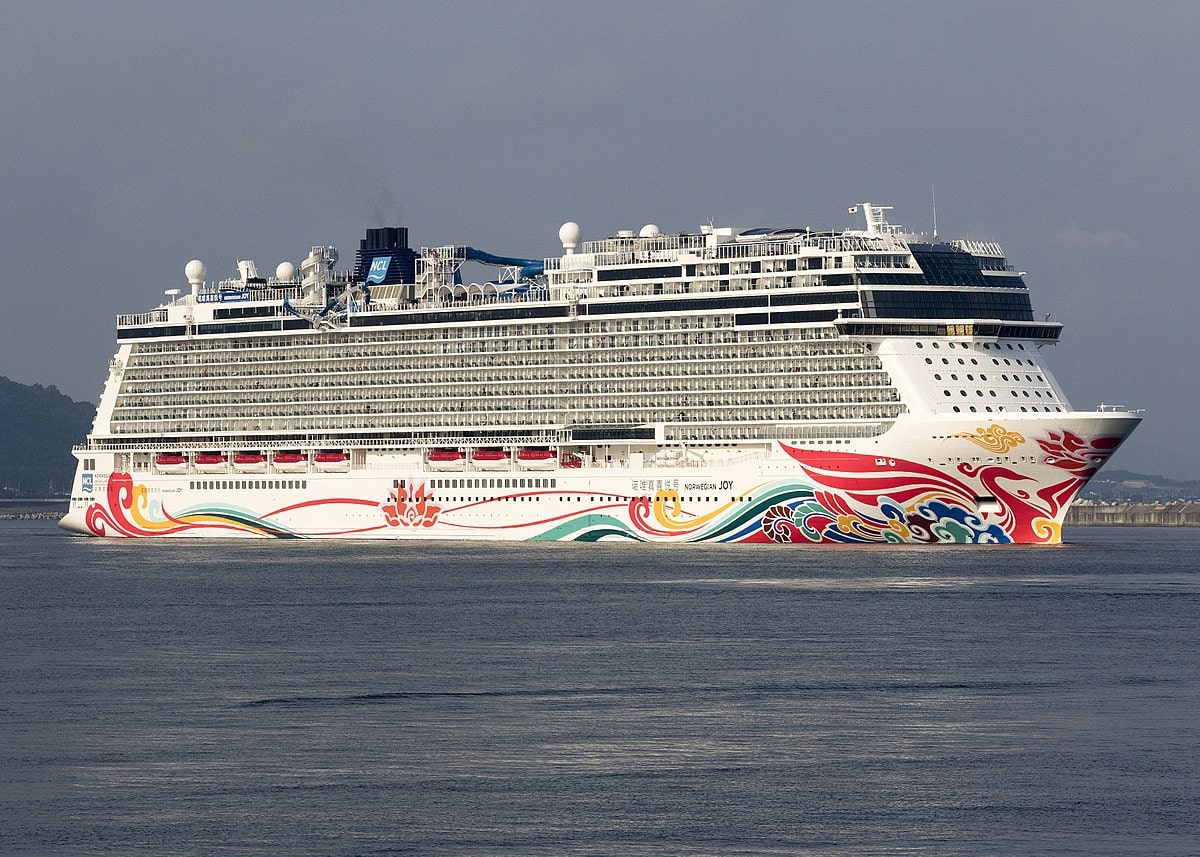 The Norwegian Joy is a ship for the Norwegian Cruise Line. The 102,900 hp vessel was initially built to service Chinese market with home ports in Shanghai and Tianjin. However, in 2018, the Norwegian Cruise Line organization decided to refit the ship and use it in the American cruise market. Now, rather than sailing from China to Dubai, it sails the West Coast of the United States, visiting ports from Mexico to Alaska.

Among the ship’s unique compliments are a two-level race track for mini-cars and a virtual reality arcade.

Fires broke out on the Norwegian Joy twice the space of a month in 2016. 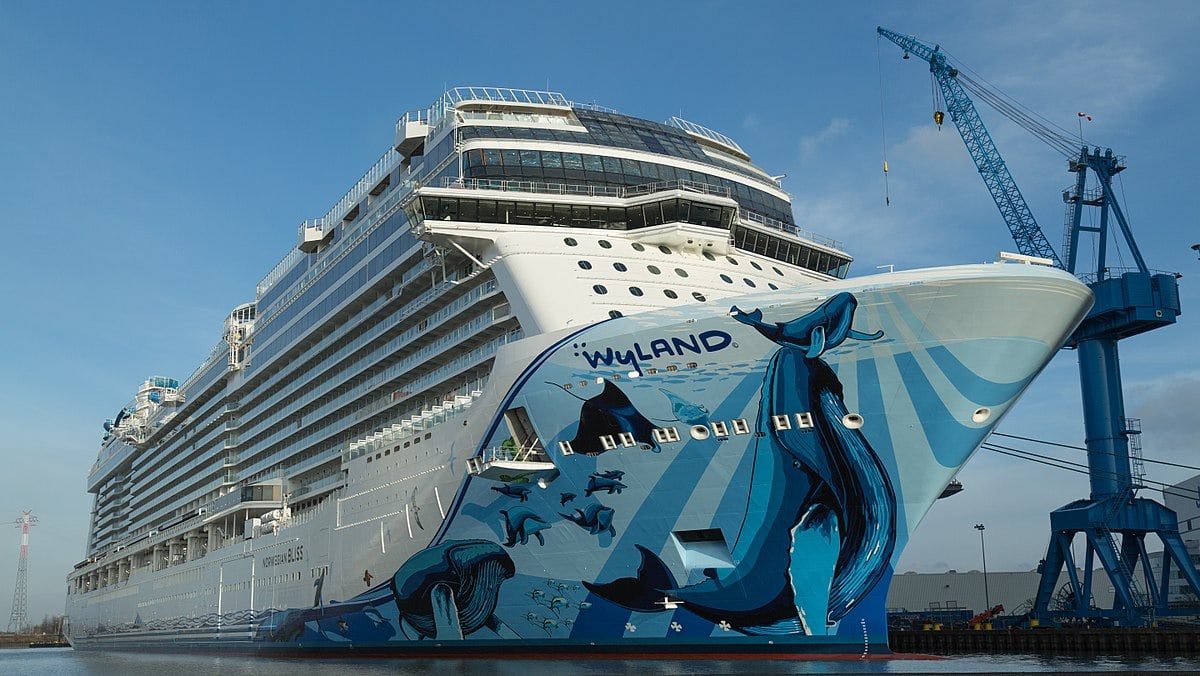 The Bliss is a sister ship to the Norwegian Joy and Norwegian Escape. It services the American market and will sail the East Coast of the United States out of New York City. It has 20 decks and 2,200 staterooms. Most of the rooms have a view of the sea and several have their own balconies overlooking the ocean. The exterior hull is painted with schools of whales and dolphins that its passengers can expect to see during the cruise.

The ship has amenities such as:

The first season of the ship saw the Bliss based in Miami. It sailed through the Panama Canal and was the largest cruise ship to pass through. 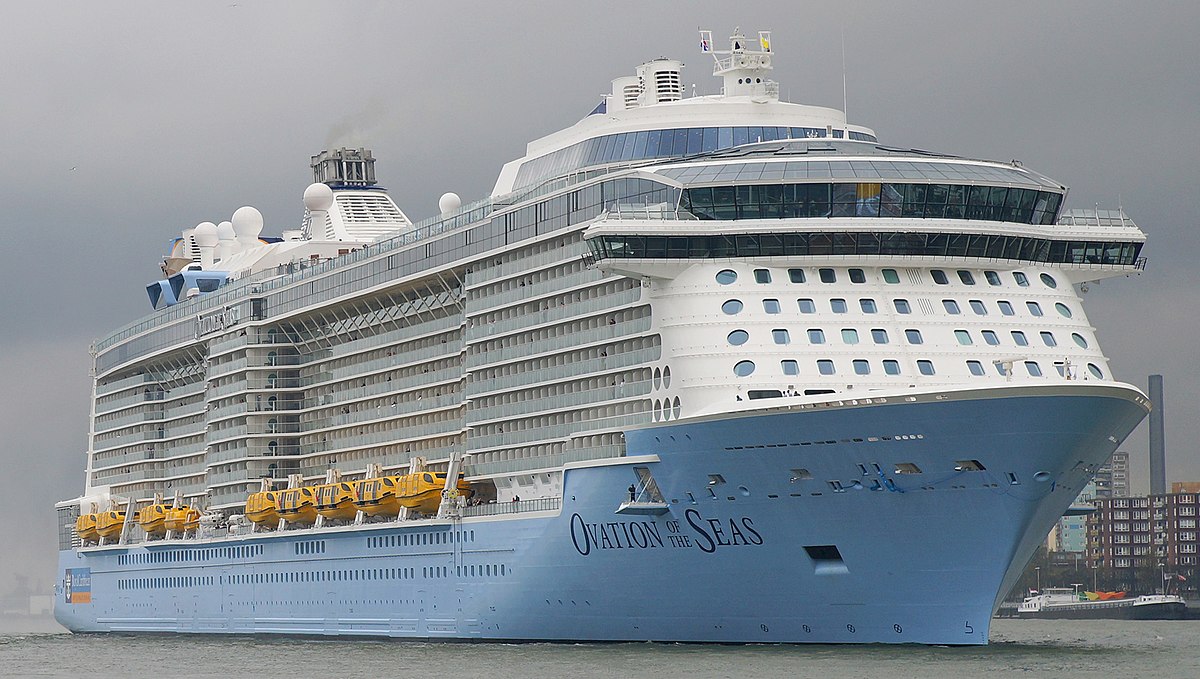 The Ovation of the Seas is one of three ships that make up the Quantum class cruise ships employed by Royal Caribbean International cruise lines. The three ships have nearly identical size, capacity and mechanics. The major differences are when they were introduced into service, the routes they travel and their entertainment options for guests.

The Ovation’s initial homeport was Tianjin. The ship has also used Sydney, Australia as a home port and will sit in Seattle, WA in the USA in 2019.

The Ovation caters to those interested in adventure sports with a rock climbing wall, a surfing simulator and a sky diving simulator.

The Ovation visited the Philippines in 2018, and it was the largest cruise ship to ever dock there.

The Anthem was the second of the Quantum-class cruise ships to be delivered to the Royal Caribbean International cruise lines by Meyer Werft, the construction company. The ship has 16 decks for the passengers featuring over 2,000 staterooms. In addition to the adventure-themed activities available on the Quantum-class ships, the Anthem has an on-board live escape game for guests to experience.

Most cruise ships have a “godmother” that christens the ship. Rather than choosing a celebrity, RCI chose Emma Wilby, a Scottish travel agent, to perform the duties. She sang Katy Perry’s “Roar” at the christening. 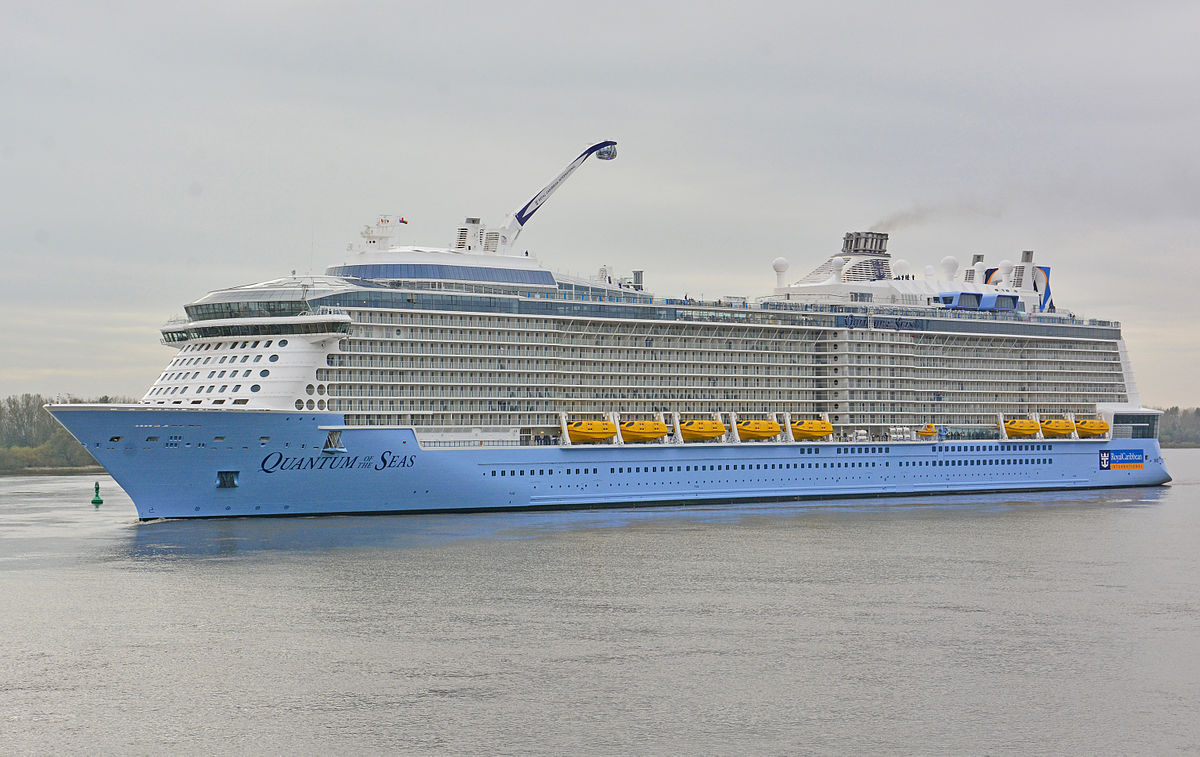 The Quantum is the lead ship in the Quantum class of cruise ships employed by the Royal Caribbean International cruise line. It was the first ordered and first placed into service. The ship was first docked at Cape Liberty in New Jersey in the USA. Later, RCI changed its route to service Asia, specifically Shanghai, Hong Kong and Japan. To better serve the Asian audience, RCI introduced casinos and an Asian-centered cuisine for the vessel. They have also incorporated a drum show, inspired by Japanese Taiko drums.

RCI allows customers living outside of the cruise ship’s region to book passage, so foreigners can visit China and Japan via the Quantum. 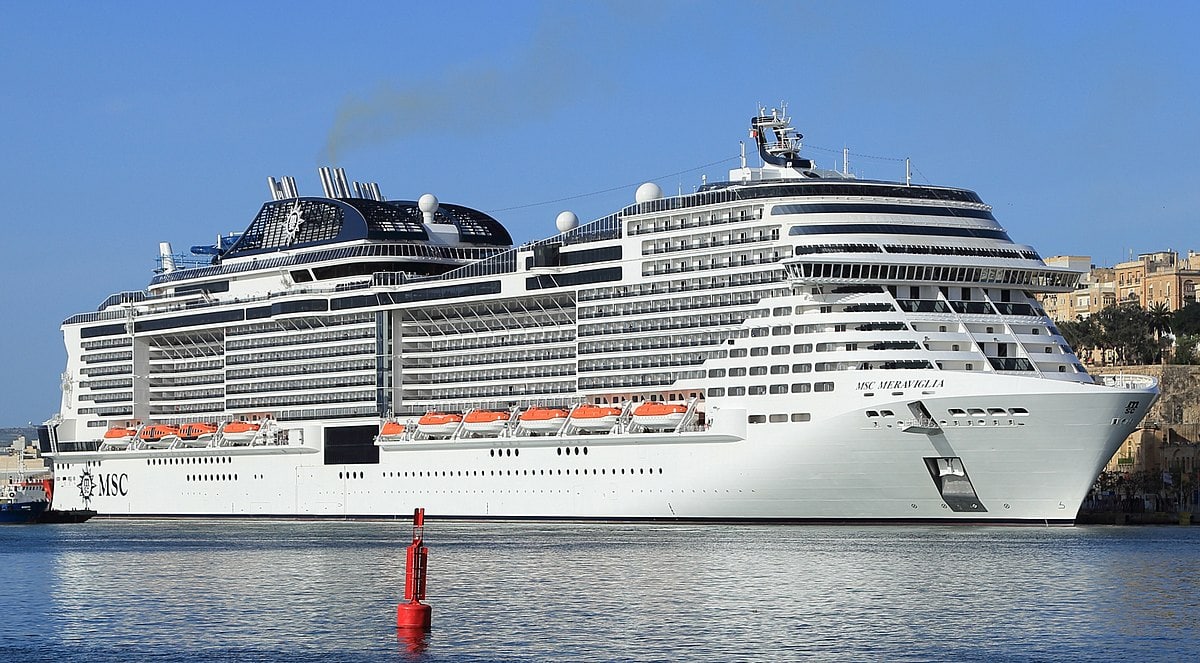 This massive vessel is the first in a planned Vista class of cruise ships owned by MSC Cruises. It will operate in the Mediterranean with its home port in Malta. The ship has 15 passenger decks and a crew compliment of over 1,500 people. Among the on-board entertainment includes a Himalayan rope course, water slides, indoor soccer, racing simulators and Cirque du Solei at Sea.

Beginning in 2019, the Meraviglia will move its home port to Miami where the ship will service the US market.

The ship was featured on the television series “Building Giants” where viewers were able to see how the ship was built. 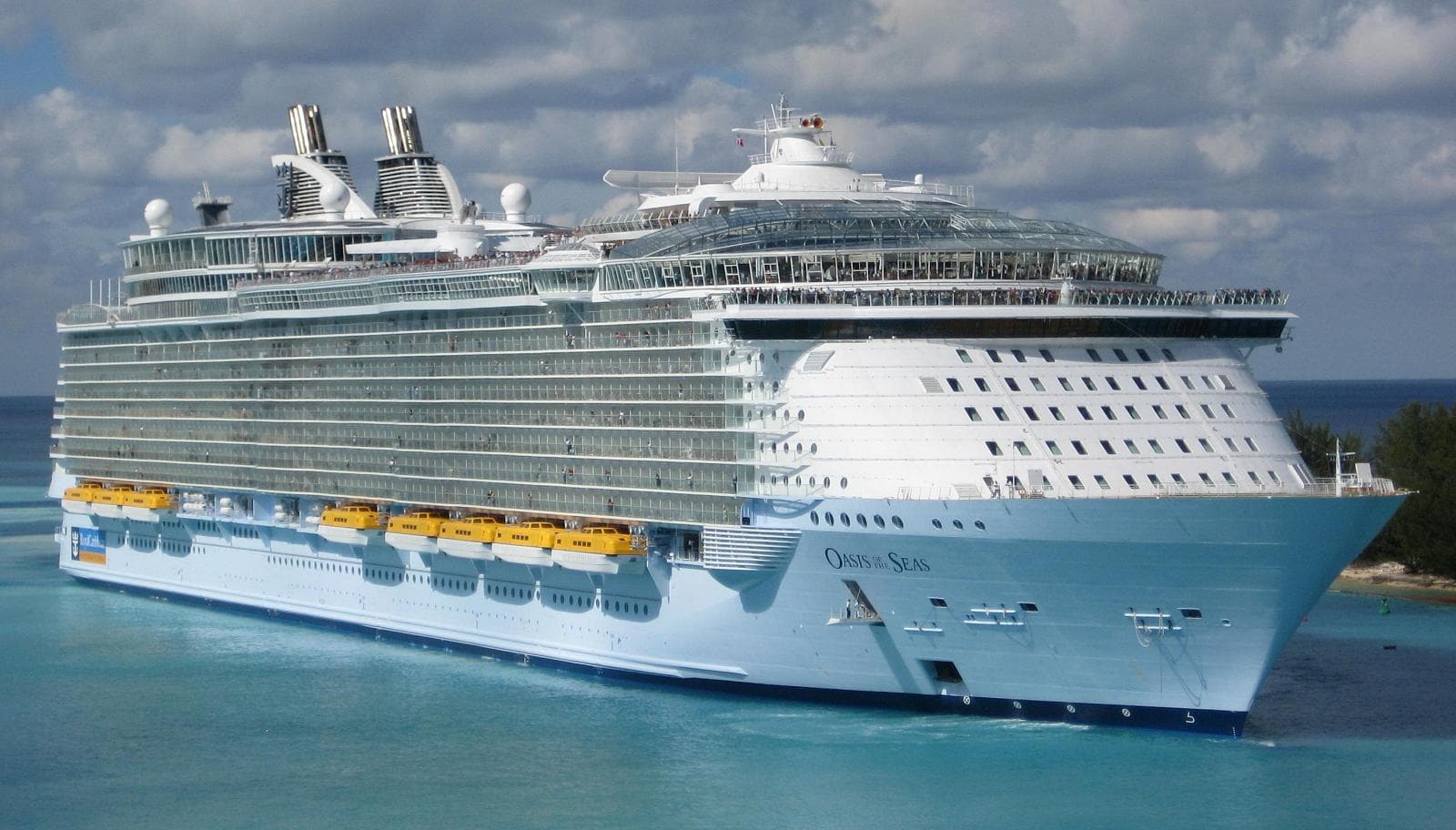 The Oasis was the first in its class of cruise ships commissioned by the Royal Caribbean International cruise line. When it first set sail, it set a record for being the first ship to carry over 6,000 passengers. The other ships in its class are all virtually the same size and capacity, with differences owed to the atmospheric conditions at the time they were put together and some work performed later on these ships.

The Oasis-class ships have six diesel-powered engines and they also use solar power, increasing capacity without increasing weight and mitigating the damage to the environment.

The ship has been retrofitted twice to add or change passenger entertainment options. 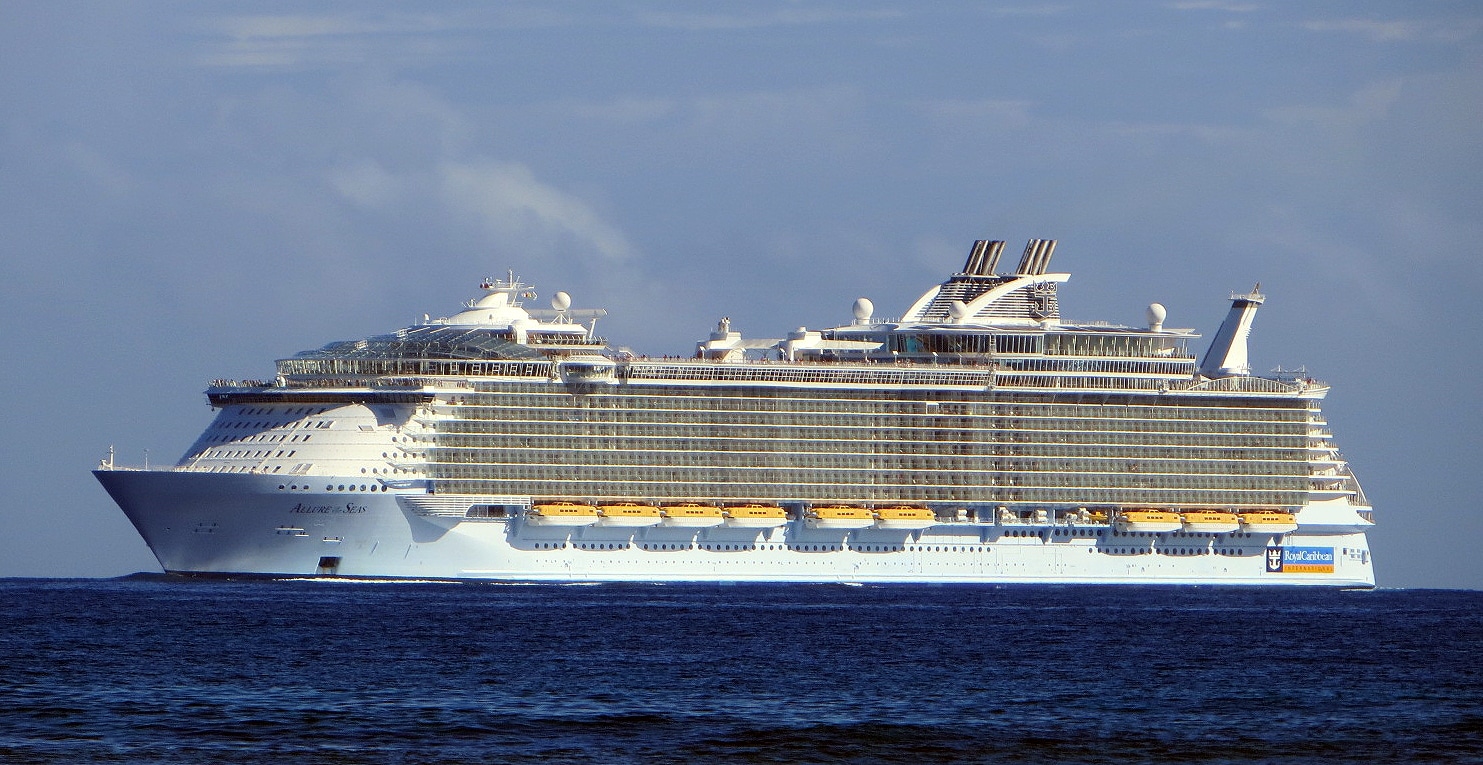 Source: Jorge in Brazil [CC BY 2.0] via Wikimedia Commons

The Allure is the virtual twin of the Oasis at Sea, having the same size and capacity as its sister ship. It’s home port is Port Everglades, FL after spending a year sailing out of Barcelona, Spain. The ship’s amenities includes a dance hall, a theater and an ice skating rink. It has the adventure amenities featured in RCI’s Quantum-class ships as well as a casino and Broadway musical productions.

The Allure is the only cruise ship to have a fictional character as its godmother, Princess Fiona from the movie Shrek. 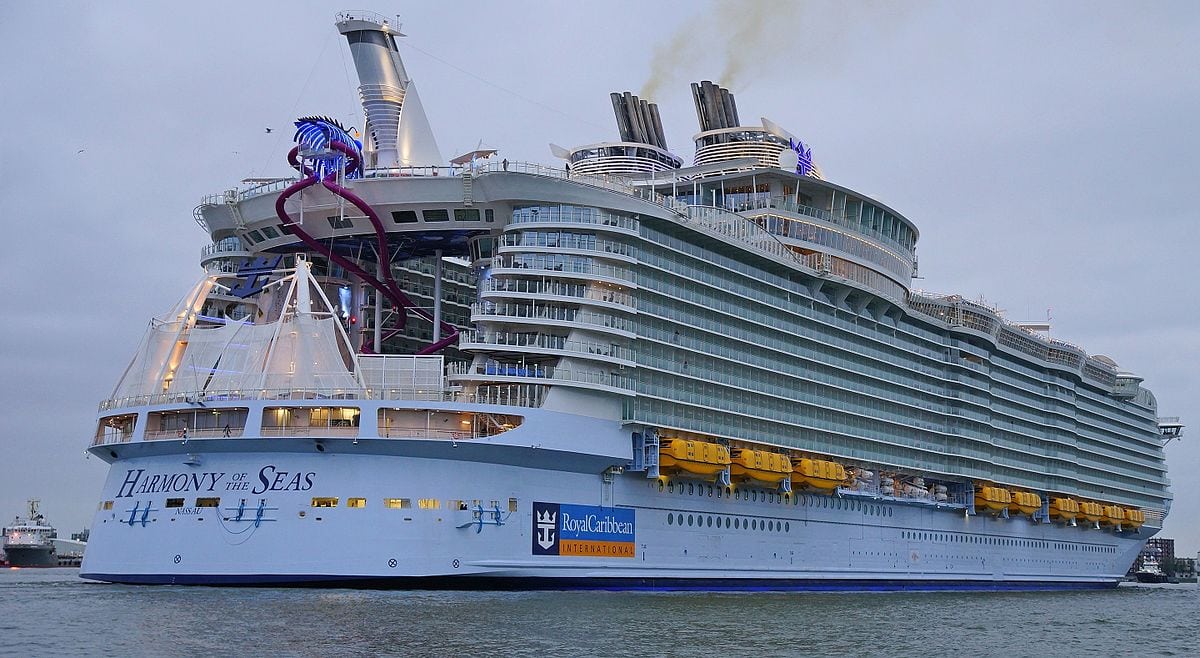 The Harmony is very similar to the other ships in its class save it being the second largest of the Oasis-class ships. The ship has different Broadway shows and restaurants. It also has additional water slides and adds a dry slide. The dry slide is a ten-story slide that guests ride down on a mat. Other guest amenities includes: 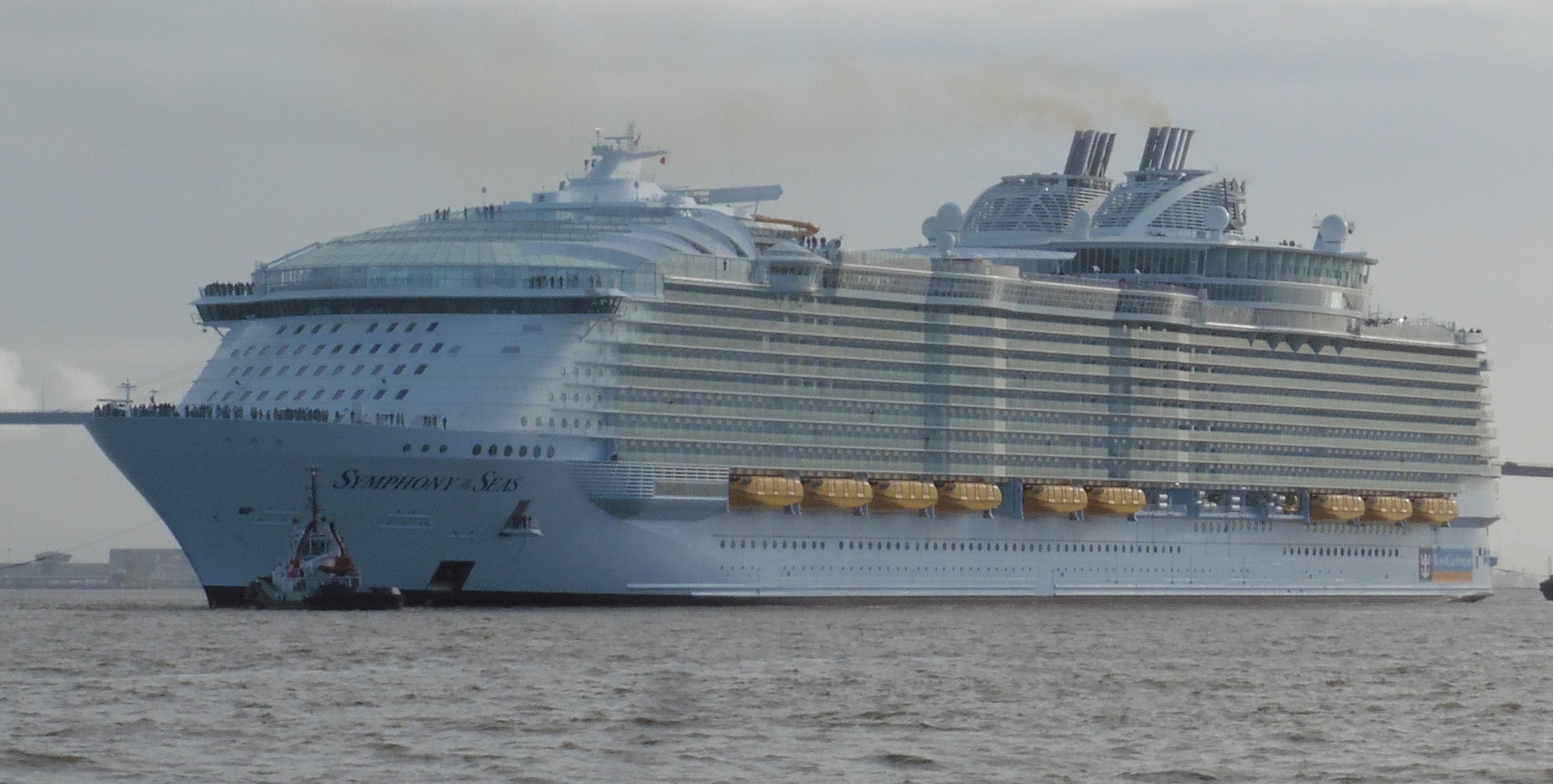 The Symphony of the Seas is the largest cruise ship in the world and the largest of the Oasis class. The ship began based in Barcelona, but makes its homeport in Miami at press time, sailing throughout the western Caribbean. The new homeport is the Royal Caribbean International’s new terminal in Miami, completed around the same time as the Symphony set sail.

The Royal Caribbean International Company bills the ship as a mix of all of the best of the sister ships in its class, as well as the best of the Quantum-class ships. It has updated those accommodations.

The Symphony, and the other ships in the Oasis class, are about 100 feet longer than the Nimitz-class aircraft carriers for the United States Navy.