The word “yacht” comes from an old German (Deutsche) word meaning “chasing ship.” The word described fast sailboats used at first by pirates, then by the people who wanted to catch pirates. The owning one of these ships became a fad among the wealthy shipbuilders in 14th century Holland. Eventually, the fad spread to England when Charles II started sailing his for sport and pleasure.

The sailing ships of yore have been replaced by motorized versions that act as party boats for the wealthy. There is no greater signal to the world that you have enormous riches than owning a massive yacht. The more rich, the more massive.

The Yas wasn’t always a yacht. It was a military vessel in the service of the Royal Netherlands Navy. The ship was decommissioned by the Dutch Navy in 1978 and then sold to the United Arab Emirates for their navy. In 2005, the UAE decommissioned the Al Emirate. Hamdan bin Zayed purchased the ship in 2011 and had a French engineer repurpose it at the UAE shipyards.

There isn’t a lot of information on the additions and the interior of the Yas, we do know that the design was meant to resemble a dolphin. The ship accommodates 60 guests and a crew of 58.

Another wealthy sultan is looking to convert a Dutch frigate into a yacht. The Swift135 is under construction. 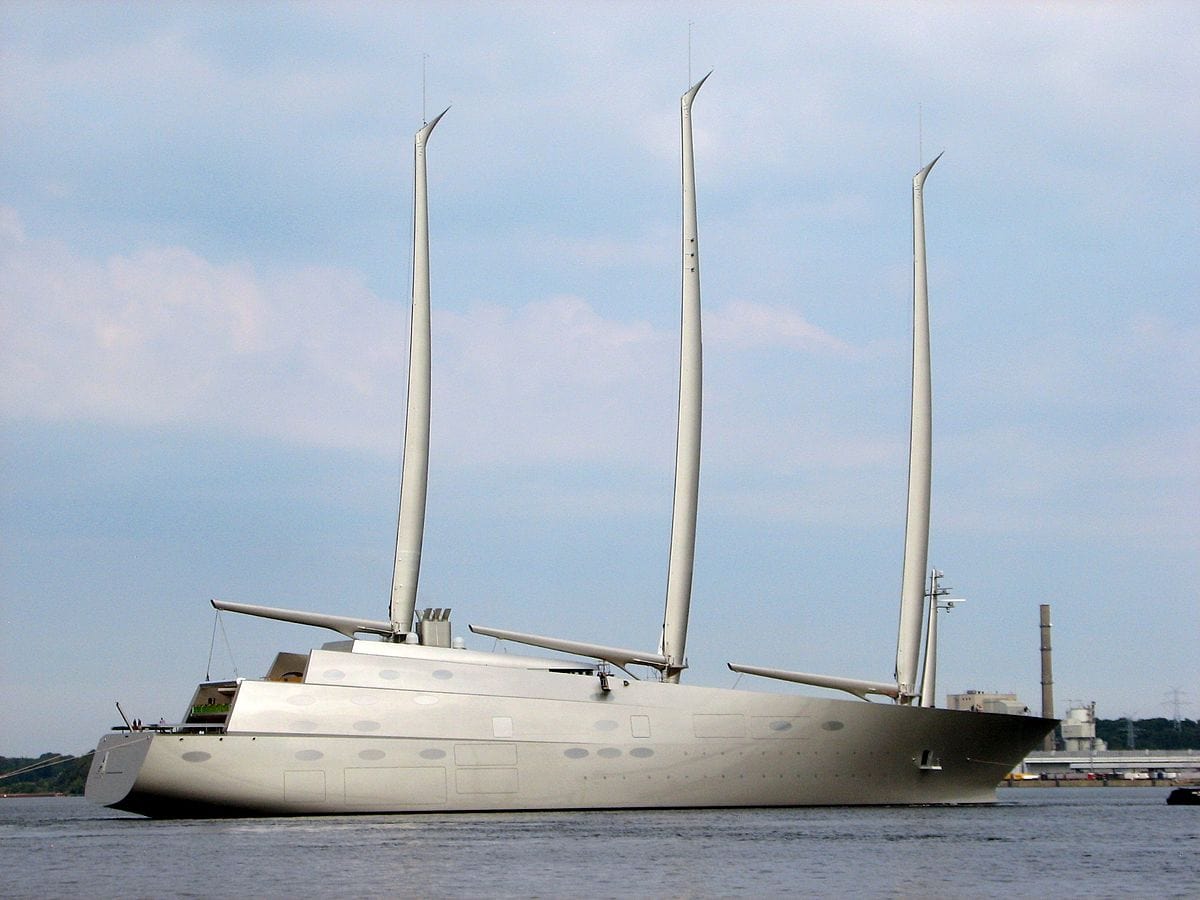 This futuristically designed yacht looks more like a fictional starship than a sailing vessel. It was the intent of the designer Phillipe Starck who has designed another massive yacht for owner Melnichenko, Motor Yacht A. The ship takes a crew of 54 and can handle as many guests. It has an underwater viewing platform in the keel and can reach speeds of 20 knots.

The mainmast of the yacht is as tall as the London Tower. 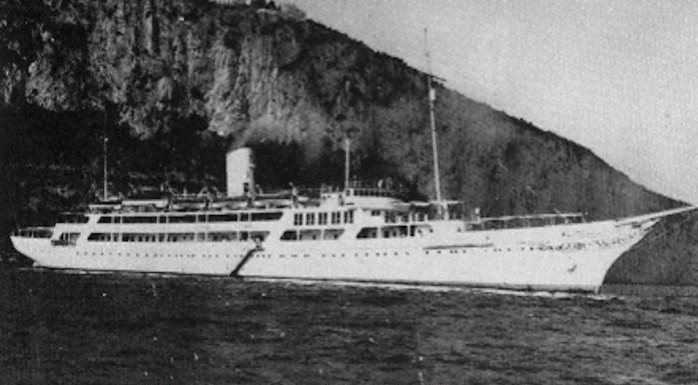 The ship was built at the behest of Isma’il Pasha, an Egyptian ruler who believed in making the country more like European nations. His British-built yacht was a symbol of his brand of modernization. After the Egyptian revolution, the yacht was in service of the military.

The yacht, with a 16-knot top speed, is rarely used, which is unsurprising, given its age. It most often sails on special occasions.

The El Mahrousa was the longest yacht in the world until 1984. 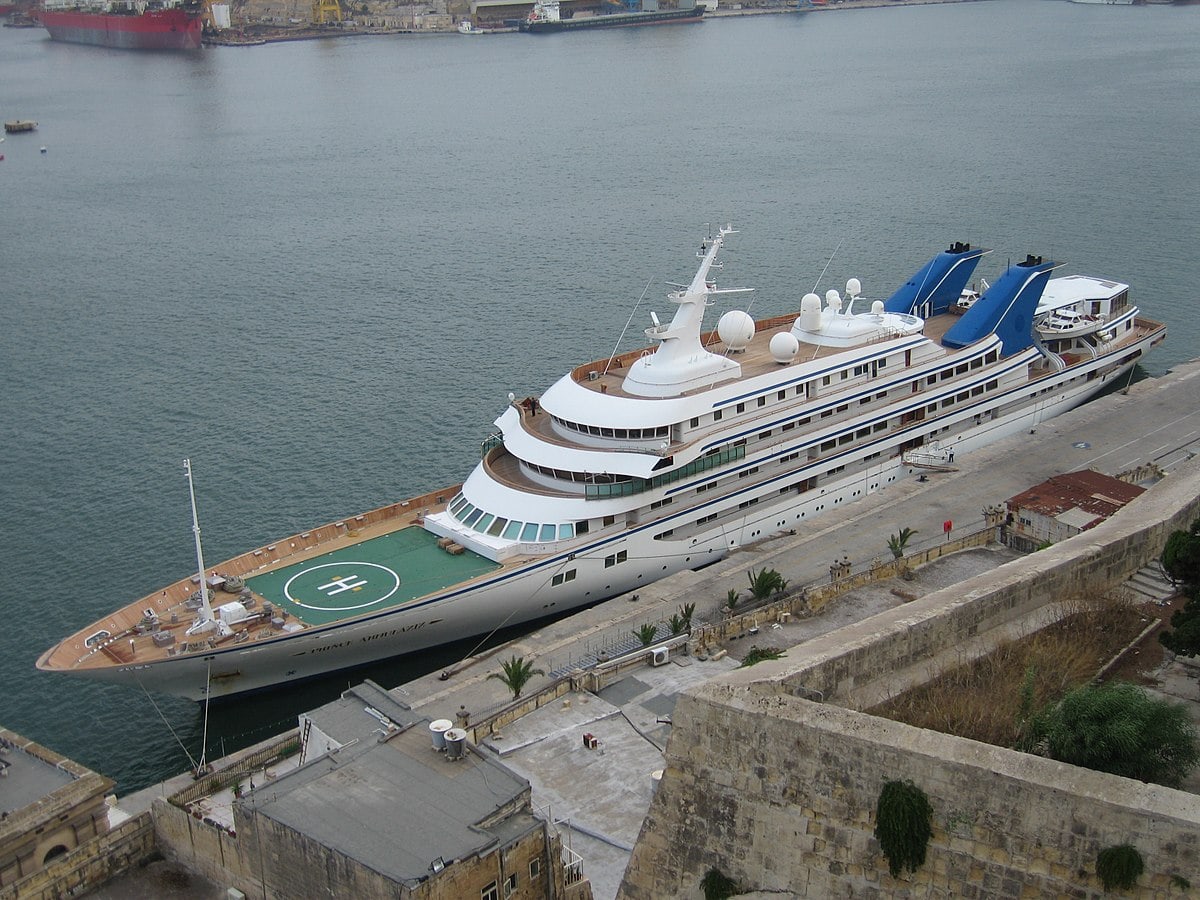 Source: By Mecil [CC BY 3.0] via Wikimedia Commons

This yacht is one of the fleet in service of the Royal Family of Saudi Arabia. It was first commissioned by King Faud bin Abdulaziz Al Saud. The ship can reach speeds of 22 knots and can carry a crew of 60. It has the capacity for a similar number of guests who can use the interior pool and other accoutrements. The ship also has a helipad on deck.

The Prince Abdulaziz was the longest yacht in the world until the year 2006.

Another yacht owned by Saudi royals, the Topaz was built specifically for Mansour bin Zayed. Not only is the ship slightly longer than the Prince Abdulaziz, it is also has a slightly higher top speed (25 knots). However, the interior is very similar to the older Royal yachts, complete with an indoor pool and Jacuzzi and other amenities befitting a prince. The exterior is more modern and has a dual helipad. 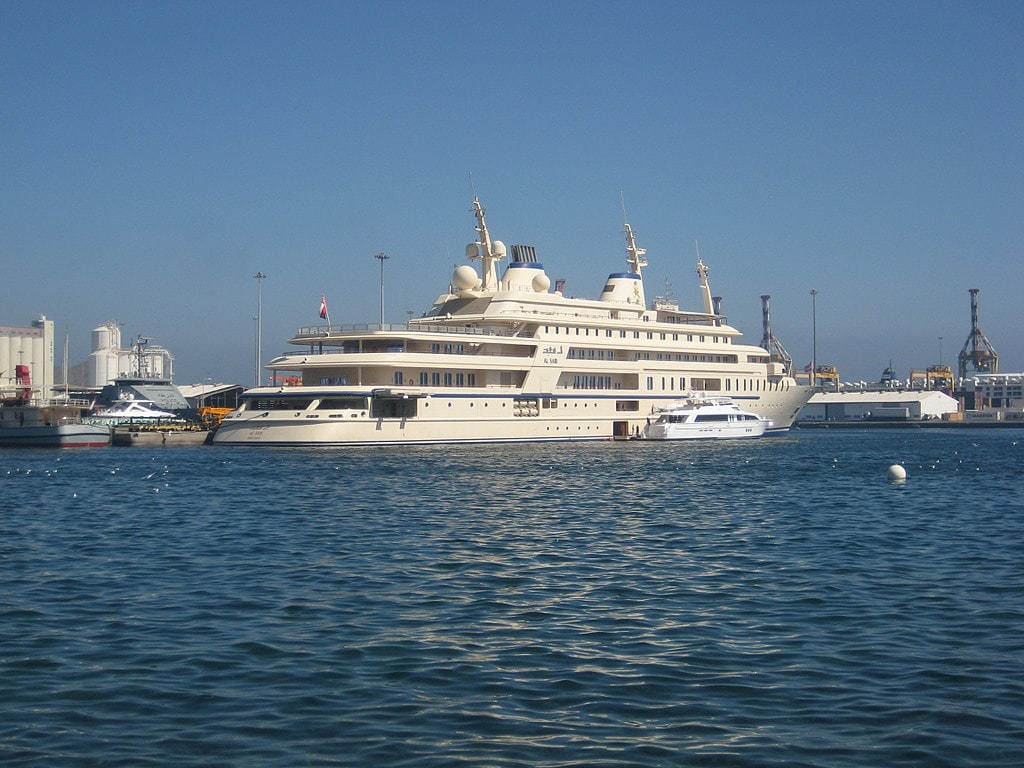 This yacht is one in the service of the ruling family of Oman. Aside from being the fifth-longest yacht, it also ranks in the top five in engine power and displacement (tonnage). From the outside, the ship resembles a luxury cruise liner with its heliport, six decks and swimming pool.

The ship has a concert hall and conference rooms. It can accommodate over 70 guests and 150 crew members.

There are no known interior photos of the ship. 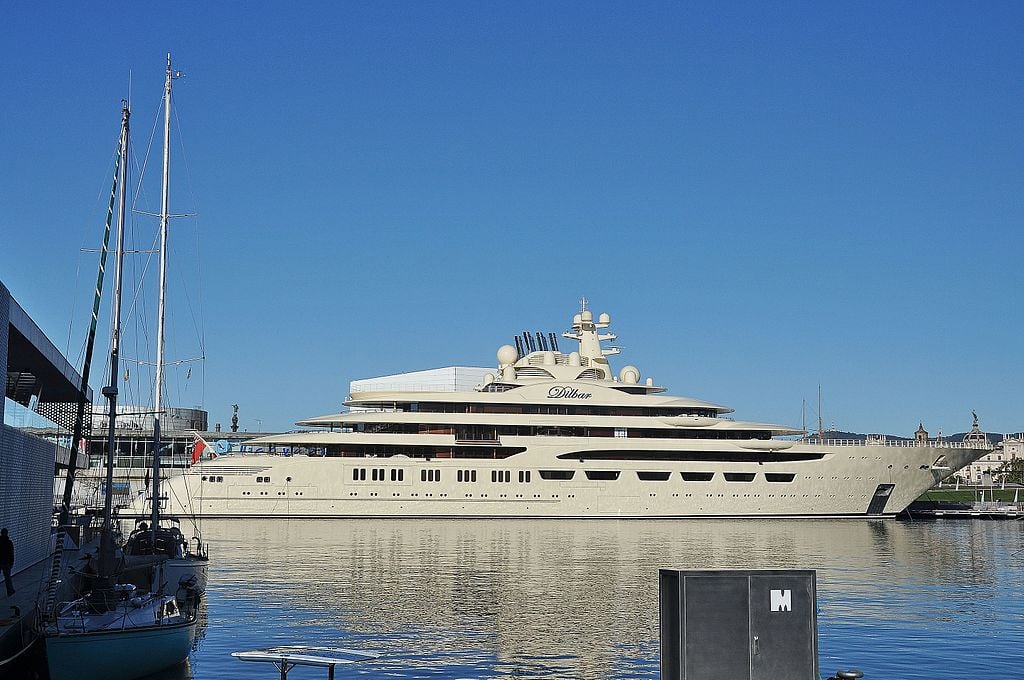 This yacht, owned by a Russian business executive, is the largest in the world by volume. Its displacement is 15,917 gross tonnes. Usmanov previously owned two smaller yachts, each also named Dilbar. Usmanov sold them both.

The current Dilbar has four decks, two heliports (fore and aft) and a decorative exterior lighting system. The interior of the ship is believed to contain 3,800 square feet of living space, office space and conference rooms as well as a spa, pool and gym.

The Dilbert is estimated to be worth $1 billion USD. 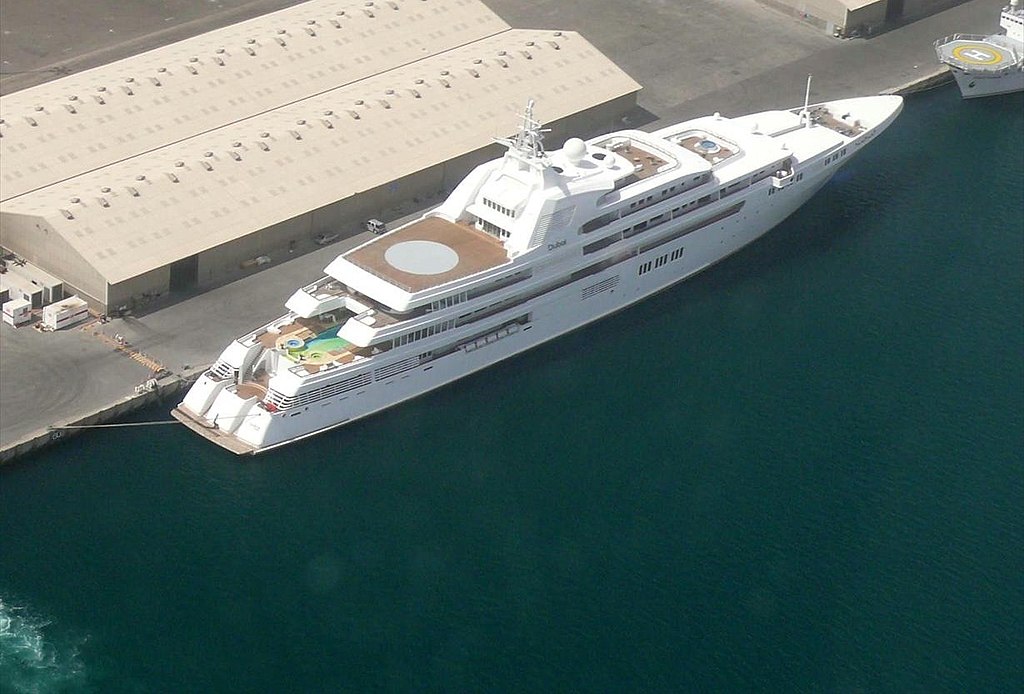 The Dubai was originally meant to be built for a member of the royal family of Brunei. The deal fell apart and construction ended. Another company purchased the hull, and then construction continued.

The ship’s 22 cabins hold 36 guests. There’s room for 88 crew onboard. Other amenities include a dance hall, indoor pool (with an additional pool on one deck), a movie theater and a gym.

There are seven decks total. The relatively light yacht (10,000 gross tonnes) can reach speeds of 26 knots.

The owner is the head of the Emirates Airlines. 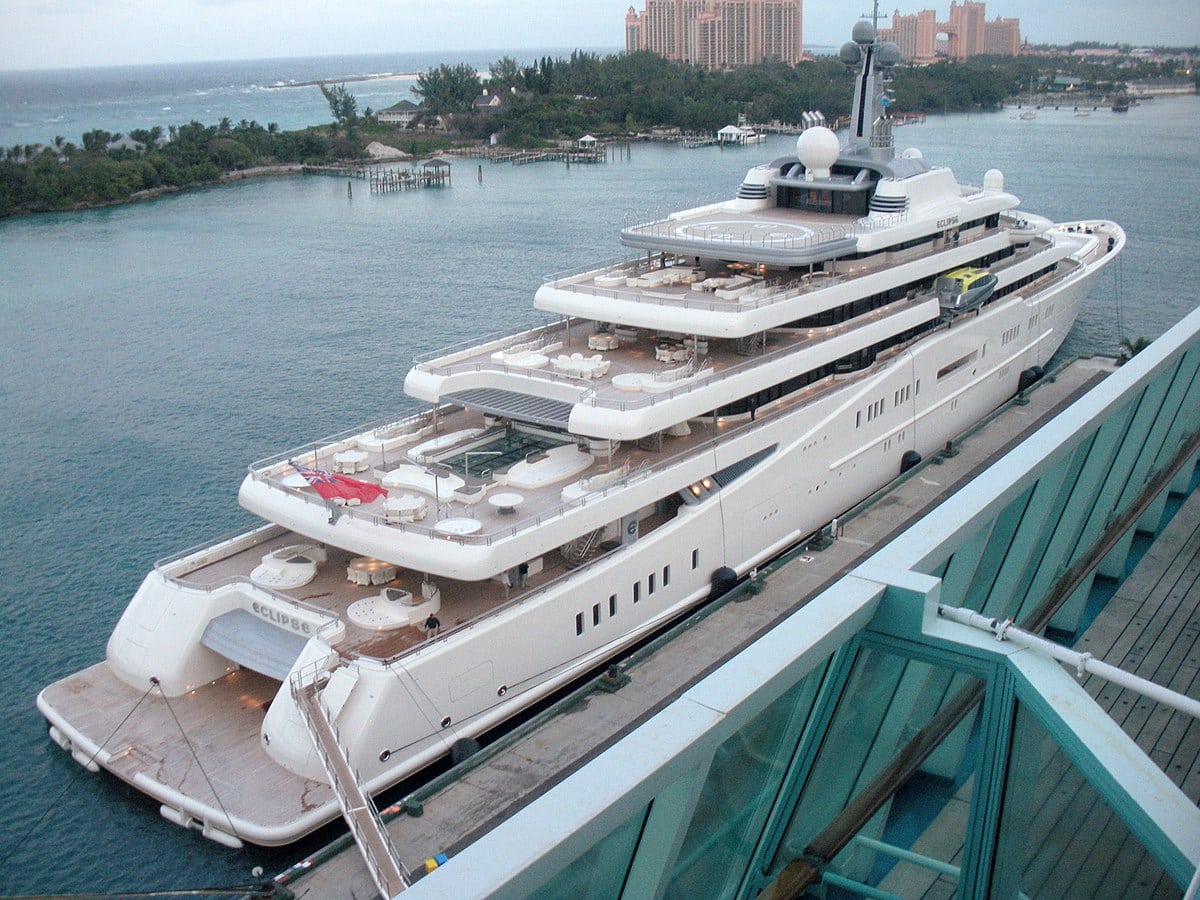 When Chelsea Football Club owner Roman Abramovich received the Eclipse from the construction company in 2010, it was the world’s largest yacht. For a year, Abramovich used it privately until offering it for charter in 2011. That could offset the cost of the vessel, estimated to be $500 million.

The ship has 24 guest cabins, interior pools and hot tubs, a disco, gym, spa and comes with a functional submarine.

One of the most unique features of the vessel is its missile detection system. It is rumored, but has yet to be confirmed, that the Eclipse has its own ship-to-air missiles onboard.

The Azzam is the largest privately owned yacht in the world. At a cost of $605 million, it is available for charter like the Eclipse. However, observers believe making the ship a commercial vessel is merely a tax dodge.

One reason it is believed to be for tax avoidance is that the Sheik, President of the UAE, is very private and wouldn’t like others using his vessel. His desire for privacy results in little being known regarding the ship’s interior. We do know that the ship can reach 32 knots, has a submarine and a missile defense system.

The Azzam is larger than a class of destroyers in service of the United States Navy.