Butterflies serve as important pollinators, fertilizing plants while they feed and preserving the habitat and food source of countless other species as a result. While butterflies of every shape and size are delightful to see while they flutter from one flower to the next, it’s often the largest and most colorful ones that catch our eyes!

So, just how large can the biggest and most impressive butterflies get? Today we’ll be taking a look at 10 of the largest butterfly species in the world and ranking them according to their wingspans. We’ll also learn some fun facts about each butterfly! 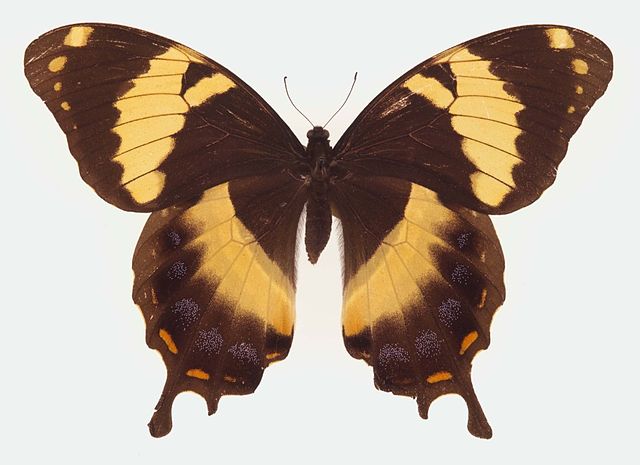 Also known as the Jamaican Swallowtail, this butterfly can grow to have a body length of around three inches, and is notable for the striking dark yellow on its wings. Unfortunately, this gorgeous species has dwindled noticeably in numbers and is now limited to only two population groups on the island. Exact estimates of how many Jamaican Swallowtails remain are unknown since they prefer to keep to their deeper rainforest habitats.

Since these butterflies are so elusive, scientists must conduct ongoing research in order to form effective conservation strategies. 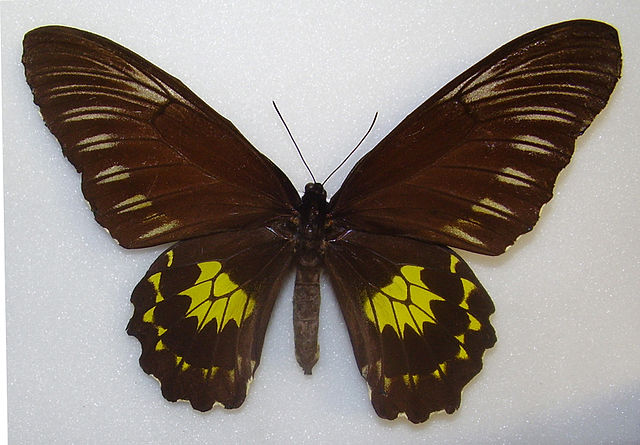 Fortunately, while the population of the Miranda Birdwing is on the decline due to habitat destruction, the species is still considered to be at minimal risk in terms of conservation. These butterflies are protected by law and are a member of the Troides amphrysus species group, along with several other similar-looking varieties of birdwings. The species is believed to have been cataloged by Arthur Gardiner Butler, who studied many species of insects, arachnids, and birds.

Borneo, where the Miranda Birdwing is found, is the largest island in Asia. 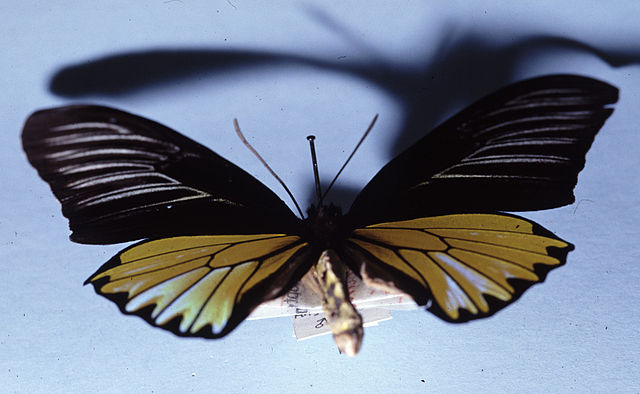 In addition to its population being well-distributed across the Philippines, the Magellan Birdwing is also found on Orchid Island, which is part of Taiwan. The yellow patches on the wings might first appear to be extremely similar to those of other birdwing butterflies, but they actually play off the light and reflect different colors, such as blue and green, and different angles! Both male and female butterflies are known for being brightly colored.

This butterfly species is named after the explorer Ferdinand Magellan who died in the Philippines in 1521. 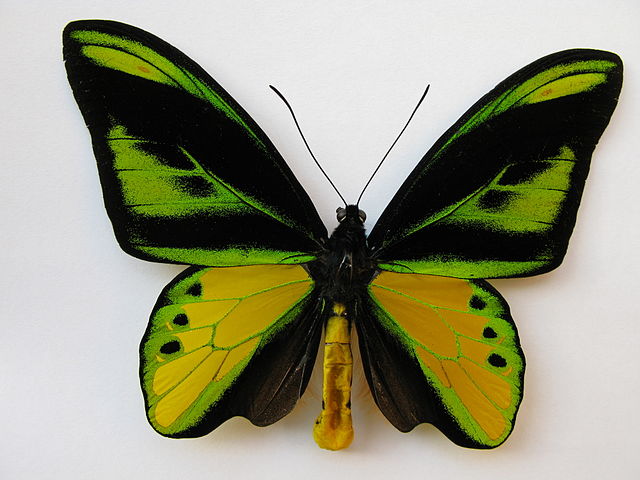 This butterfly is named for the Chimaera of Greek legend, which was comprised of three or more different animals. This species inhabits rainforested areas of Indonesia and has a habitat elevation limit of around 2,800 meters. The population is most densely concentrated around the Central Range montane rainforests, where the butterflies tend to flutter around the tree canopies.

Male Chimaera Birdwings have a pair of red tufts on the undersides of their abdomens. 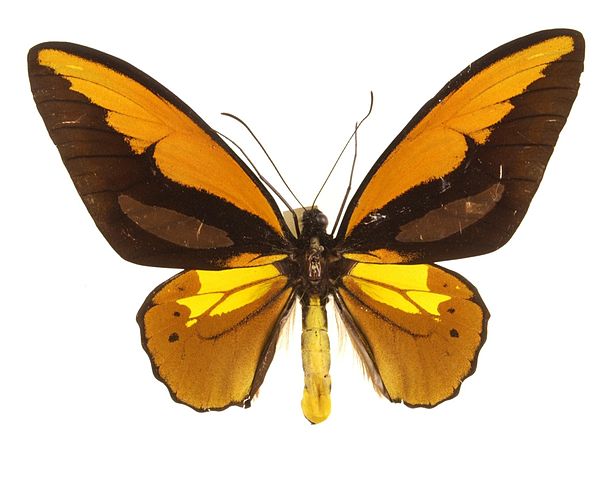 Few butterflies are as striking as the Wallace’s Golden Birdwing, which is appropriately named for the rich, deep shades of yellow and orange on its wings. Often nicknamed simply “The Wallace,” this species was named in honor of Alfred Russel Wallace, its discoverer. The larvae of this species feed on plants of the genus Pararistolochia, including the Richmond birdwing butterfly vine.

Alfred Wallace described this species in 1859 as being both beautiful and brilliant. 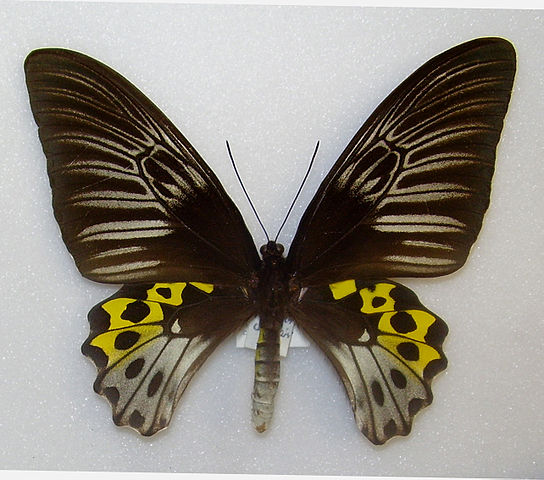 The Rippon’s Birdwing butterfly is on par with other, similar varieties of birdwings in terms of size, but it has some unique features as well. For instance, the black and yellow colors on its body closely resemble those of a wasp, which is thought to serve as a deterrent to potential predators. This variety of birdwing is especially elusive and strictly protected in order to preserve its numbers.

There are at least 36 different officially-recognized varieties of birdwing butterflies! 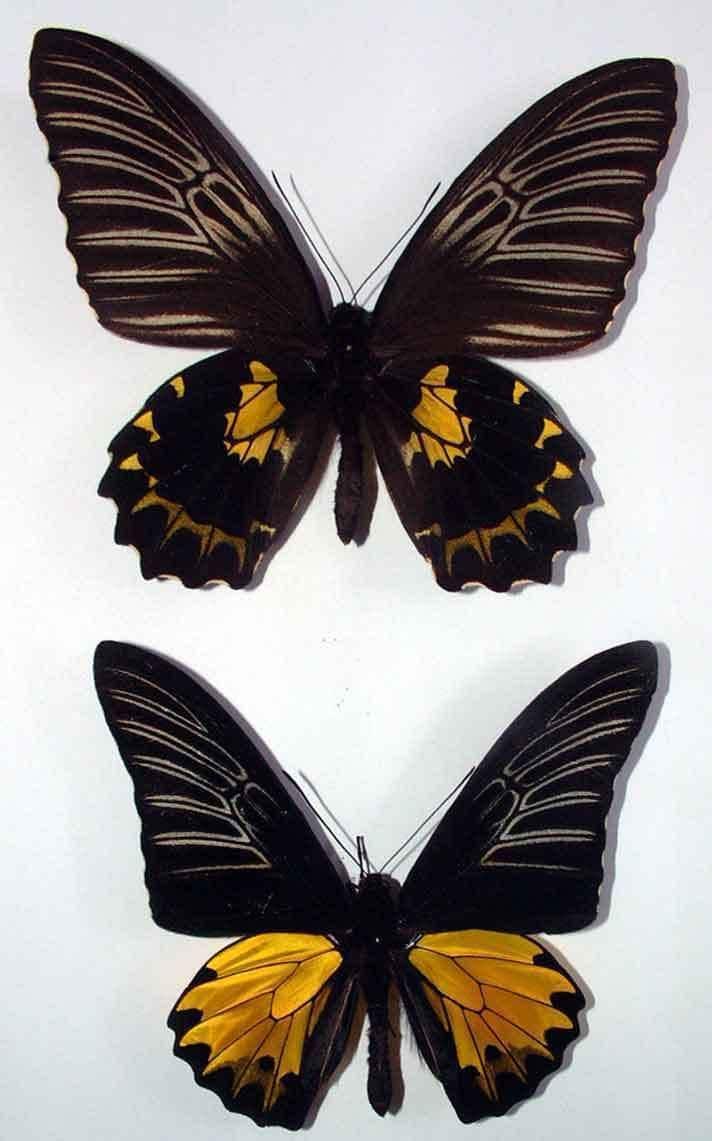 This magnificent butterfly is found exclusively on the Indonesian island of Buru, and primarily inhabits altitudes from 1,300 to 1,600 meters. Buru Opalescent Birdwings sport white highlights along the veins in their wings, similar to those of the Rippon’s Birdwing. This butterfly is sometimes commercially bred in Indonesia specifically for collections, but specimens are still quite rare.

Specimen collection and habitat destruction via logging are the primary threats to the Buru Opalescent Birdwing population. 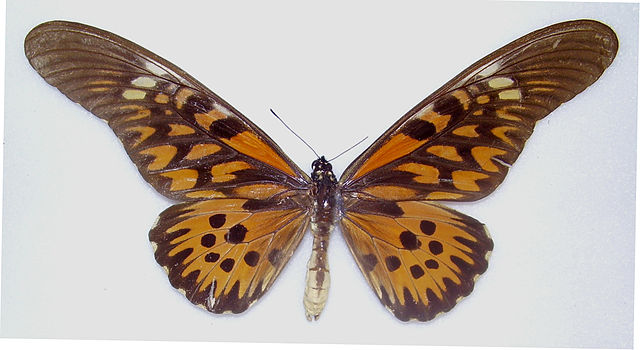 Gorgeous, mottled brown, black, and orange wing patterns make the African Giant Swallowtail especially memorable, and its high levels of toxicity make it unusually resistant to predators. These butterflies primarily inhabit moist, tropical broadleaf forests, lingering around the canopy, and are distributed throughout Central Africa. The males, which are larger than the females, can often be found feeding on nectar in groups.

African Giant Swallowtails lay single eggs to begin the next life cycle when they reproduce. 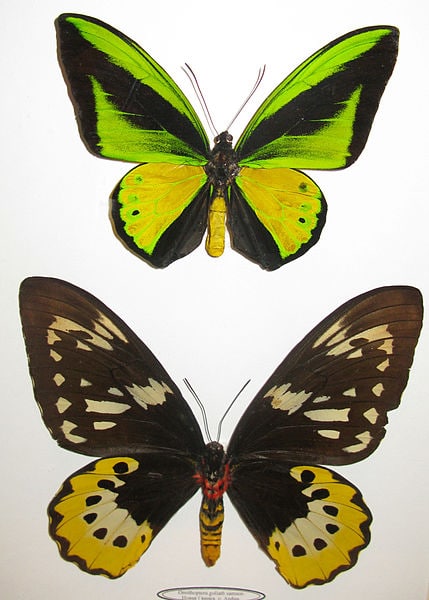 The Goliath Birdwing, so named for its massive stature, is said to be one of the rarest of the large, non-threatened butterfly species. Its host plants are low in number to begin with, and the larvae of the Goliath Birdwing tend to take a massive toll on their host plants, sometimes obliterating them completely. Interestingly, the larvae move between different types of plants as they age, and their feeding habits tend to evolve with them as well.

The subspecies of the Goliath Birdwing are also all named after giants of ancient mythology: Atlas, Titan and Samson. 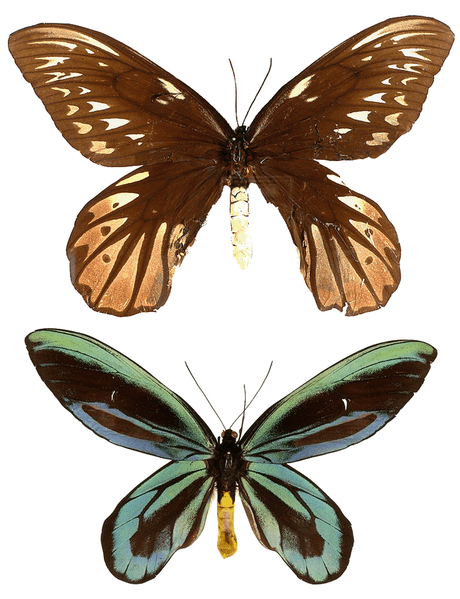 The Queen Alexandra’s Birdwing is the largest butterfly in the world by wingspan. It is also known for being an incredibly beautiful species, with its unusual teal colors setting it apart as much as its size! Unfortunately, this endangered species of butterfly is found exclusively in the Oro Province of Papua New Guinea. The eruption of Mt Lamington in 1951 destroyed a great deal of the butterfly’s habitat, and the population is still trying to bounce back.

This butterfly was named after Queen Alexandra of Denmark.