Few animals may be more threatening than bears, despite the way they are frequently portrayed in movies and on television as charming and cuddly. Bears are able to survive in hostile circumstances and are capable of killing some of the world’s strongest creatures.

Their powerful bodies allow them to beat victims into submission, and their jaws have the power to break a bowling ball with a single bite. They will consume nearly anything they can get their hands on, including members of their own species.

In fact, some reach ten feet in height and weigh up to 1,500 pounds, giving them a rather terrifying appearance.

This is a new and must-read article for you, and it’s all about the largest bear species in the world. Today we’re going to take a look at some of these larger than average bears. 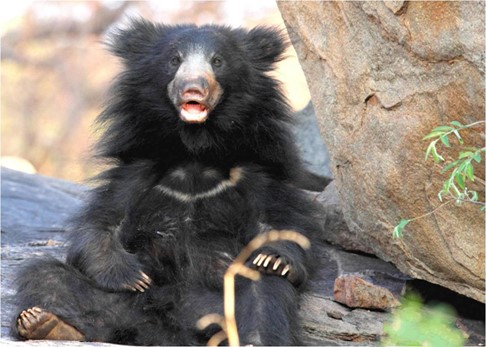 Due to its lengthy bottom lip and palate that are employed for gobbling up bugs, sloth bears are sometimes referred to as a “labiated bear.” It has hair around its face, large, scythe-like claws, and lengthy, shaggy hair.

It may be found in a variety of environments, including as savannahs and both wet and dry tropical forests. India, Nepal, Bhutan, and Sri Lanka are all part of the sloth bear’s worldwide habitat.

Since sloth bears are nocturnal creatures, they hunt and are active at night and hide during the day. They stand at a height of around 6 feet and weigh between 250 and 300 pounds.

Although the International Union for Conservation of Nature (IUCN) Red List of Threatened Species lists the Sloth Bear as vulnerable, it is already regionally extinct in Bangladesh. 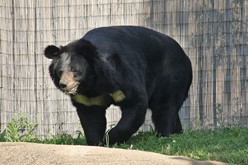 These bears, who are referred to as moon bears because of their white V-shaped, half-moon neck marks, may weigh up to 450 pounds. Adult males can grow to heights of up to 6 feet, while females are often a little shorter.

Asiatic Black Bears are skilled climbers despite their enormous size and considerable weight. They adore spending time in the branches of trees, where they interact with their cubs and seek for nutrition.

In large part as a result of habitat degradation and killing, these bears are also a threatened species. These animals are sought after for their fur, body parts, and for their skin and flesh, which are used to produce certain remedies.

Although the Asian black bear’s current range is restricted to Asia, fossil evidence suggests that it originally reached as far west as Western Europe. 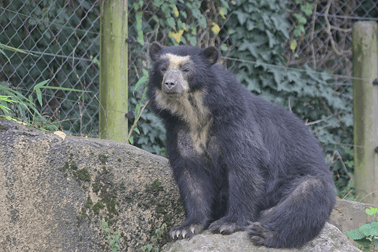 Spectacled bears are exceptionally rare since they are the last remaining members of the short-faced bear species. Bears with spectacles like to spend time in trees as well. They are skilled climbers and eat fruit, cacti, bamboo, and palm fronds for food.

The majority of spectacled bear habitat is limited to parts of northern and western South America. The Andes Mountains are home to virtually all of the species.

The species had a reputation for adaptability since it can be found in a broad range of habitats and elevations until populations of spectacled bears became split over the course of the previous 500 years.

After the panda, they are the bear species that eats the most vegetarian food. They are omnivores and like fruit, cacti, and soft tree pieces as diet. Insects, little rodents, and birds will also be consumed. 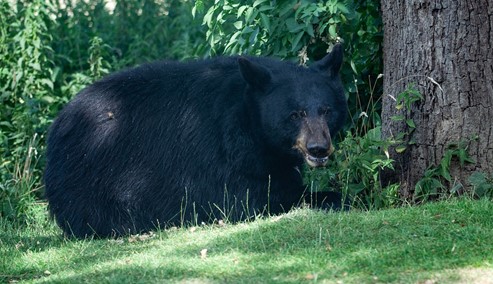 Despite having mostly black fur, certain kinds of these bears might have brown or even completely blond fur. They are all based in the northeast and northwest of the United States, as well as in some regions of Canada and Alaska.

Typically, American Black Bears eat grass. They are also known to hunt other kinds of animals. Elk, moose, deer, and fish are a few of these.

Fortunately, these bears are not under risk of extinction or being endangered. They will continue to exist and flourish for a very long time because of their extensive dispersion. 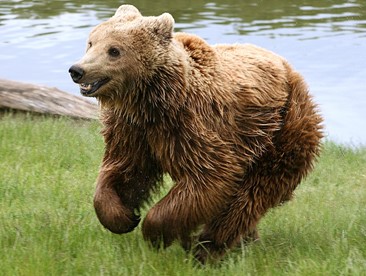 One of the brown bear species that is most prevalent worldwide is the Eurasian Brown Bear. They now mostly live in Russia, the Balkans, and all of the Baltic republics. The population of brown bears is drastically declining in certain places, like Spain, Japan, and China

These bears enjoy to down tiny creatures. They also hunt livestock and animals, and rarely initiate unprovoked attacks on people. They like to remain to themselves as long as no one disturbs their cubs.

The majority of brown bears that are located in Eurasia live alone. During the mating season, they could be spotted with their partners and cubs, but otherwise they enjoy solitary life. 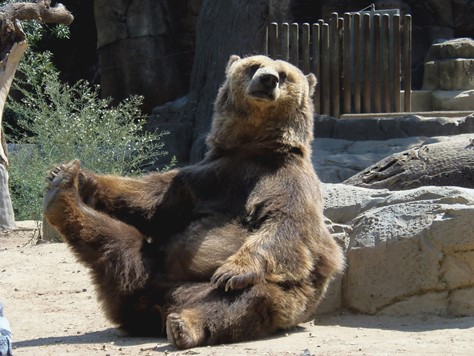 Grizzly bears formerly roamed all of North America, from Alaska to Mexico and as far east as the western shores of Canada; now, the species is restricted to Alaska, parts of western Canada, and the northern United States.

The bear has grizzled hair, which has sliver-tipped ends. Ursus horribilis, the scientific term for bears, translates to terrible bear. Although grizzlies are typically calm creatures, they will defend their cubs or food without mercy.

The hump on a grizzly bear’s back is one of its most distinguishing characteristics. The bear utilizes the hump, which is actually a sizable muscle, to propel its front legs. 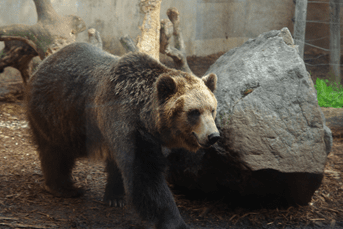 Grizzlies and Ussuri Brown Bears are similar. The color of their fur, which is substantially darker on these bears, is the fundamental difference between them.

Ussuris have smaller heads and shorter foreheads, but their large bodies are covered with lengthy fur over the remainder of their body.

Their primary food source is vegetation, which includes berries, grass shoots, sap, seeds, and nuts. They will, however, also pursue and eat small and big animals, birds, fish, and insects.

As part of the religious celebration known as Iomante, the Ainu people of Japan worship the Ussuri brown bear by devouring its meat and drinking its blood. 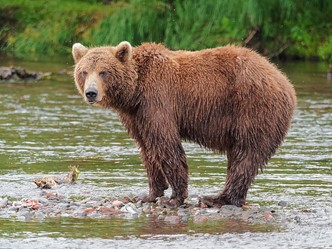 These bears are indigenous to the Kamchatka Peninsula, living up to their name. Some of them are also on the nearby islands, such Saint Lawrence, Karaginsky, and Shantar.

Salmon and trout are among the marine animals that these brown bears prefer to eat. They are a species of least concern at the moment.

Data from bears with GPS collars revealed that they can travel up to 40 miles and cross the Kamchatka to reach several salmon sources. 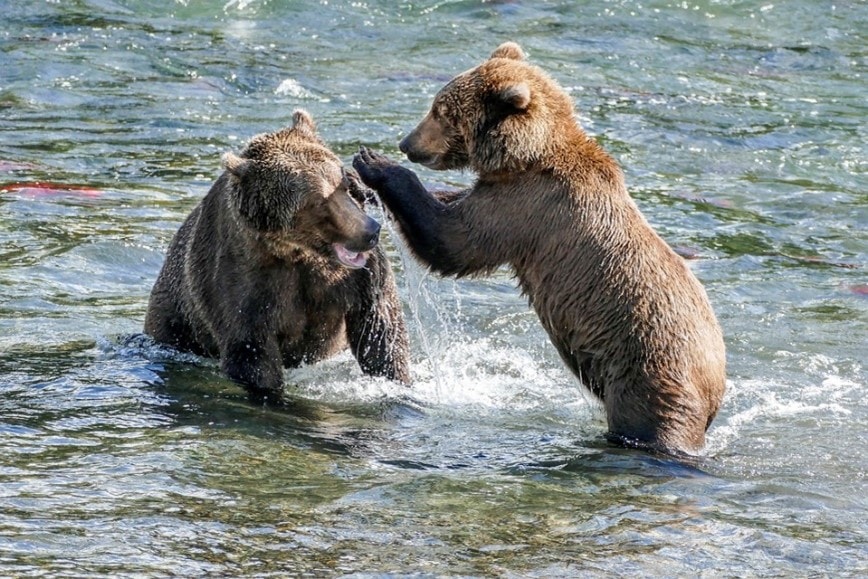 The second-largest ursid on the globe is the kodiak bear. They are indigenous to the Kodiak Archipelago and may weigh over 1,400 pounds and reach heights of over 9 feet. Only in this area of Alaska will you locate these bears.

Kodiak bears have always had interactions with humanity, particularly with hunters and other people who live in the remote coastal areas of the archipelago. Seaweed, salmon, and crustaceans found on the seashore are all favorites.

They go along at a 3 miles an hour average walking speed, which is fairly comparable to human walking speed. It increases his speed by two times when it starts to jog. 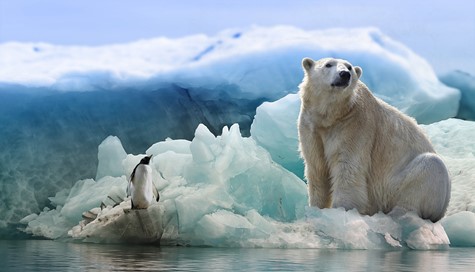 The Polar Bear is the largest bear in the world. In addition to their home area in the Arctic Circle, polar bears may be found in Greenland, Canada, Russia, Alaska, and Norway’s far north.

The largest bear species depends more on meat than any of its cousins since they consume largely seals, however they also feed on walruses, small whales, and fish.

The world’s heaviest polar bear weighed an astounding 2,209 pounds. The size of this bear was equivalent to 11 adult persons, with the typical man weighing 200 pounds.