There are many creepy crawlies to be fearful of, but none are as hair-raising as the centipede. This is a species of insect that’s characterized by its long body and numerous legs. Some species of centipede even have 100 legs! Most centipedes are venomous and carnivorous. In the animal kingdom, centipedes aren’t at the bottom of the food chain.

Most of the centipedes that we see in our homes are typically as small as the size of our fingers. However, some centipedes grow a lot larger than what we are comfortable with. These aren’t centipedes you’d want to see in your home, as they also pack a mean bite as well. 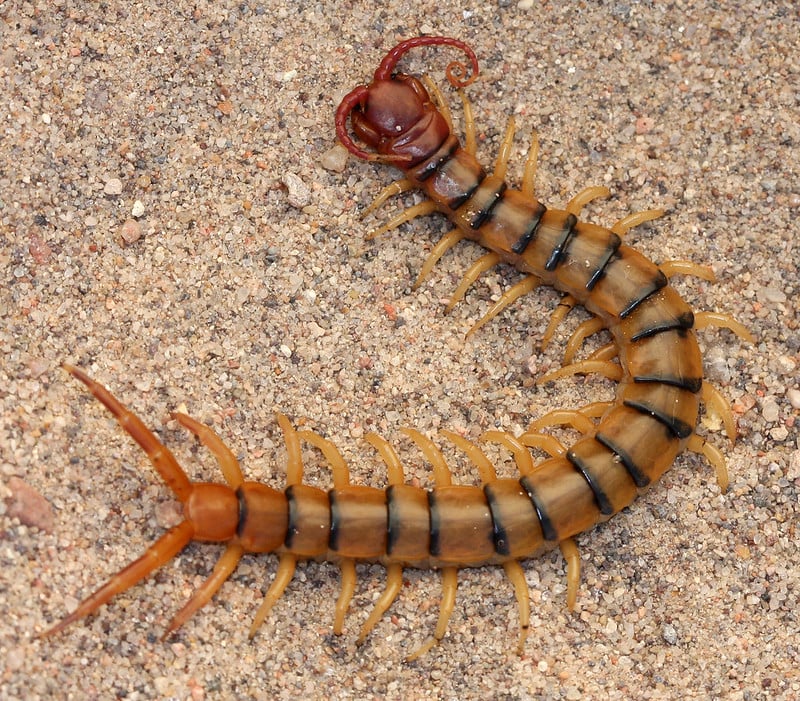 The Sonoran Desert Centipede is also called the Tiger Centipede. This is due to their tiger-stripe print. While most Tiger Centipedes feature black and golden stripes, some specimens in southern California feature light blue stripes and turquoise legs.

This centipede prefers to make rocks and shady areas its home. When it’s nighttime, the Tiger Centipede becomes more active and begins to hunt small desert insects such as tarantulas.

The Tiger Centipede is venomous, but its venom has beneficial uses in the field of medicine. Recent studies reveal that its venom possesses antimicrobial activity against Staphylococcus aureus and Pseudomonas aeruginosa, which can cause nosocomial infections. Studies also reveal that its venom can be used against food poisoning, UTIs, and even pneumonia.

The Tiger Centipede takes more than two days before it fully replenishes its venom, which makes it vulnerable for a while after it attacks. 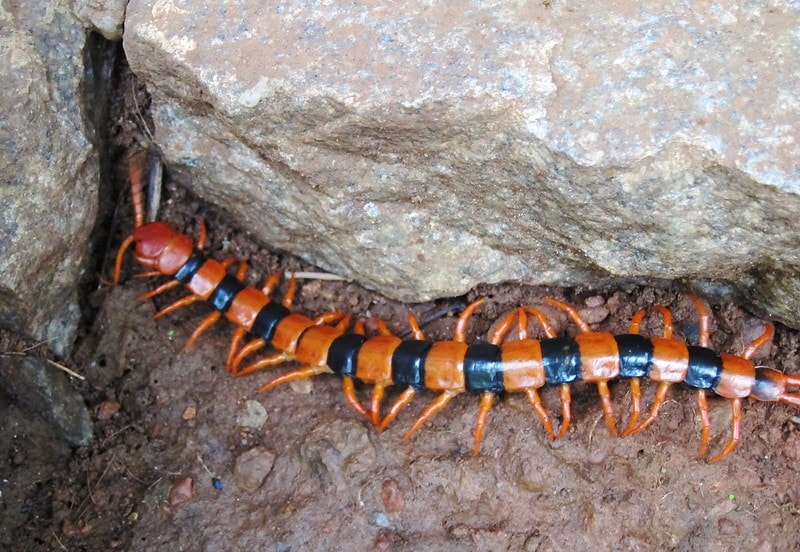 While deadly to small insects, the venom of an Indian Tiger Centipede isn’t dangerous to humans. In fact, it can only cause swelling in the affected area, as well as drowsiness. 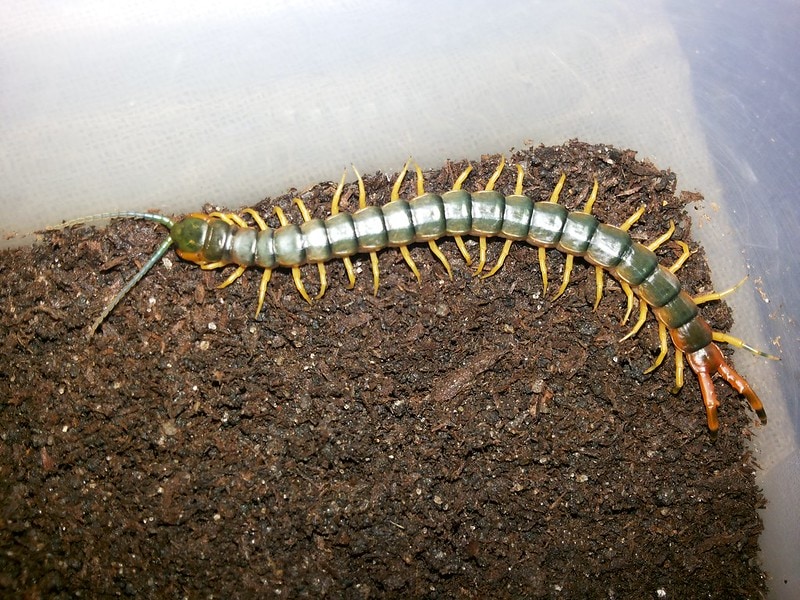 As there are many other predators in the Amazon, this centipede has developed a means to escape when the situation becomes dangerous. They will typically run while raising their hind limbs. If a predator gets too close, the centipede will grab it using its limbs, and then it will spin around and deliver a venomous bite. With the predator bitten, the Amazonian Giant Centipede will run to safety.

The Amazonian Giant Centipede is used as an analgesic in northeast Brazil folk medicine. The creature possesses a peptide called lacrain which exhibits potent antimicrobial effects. 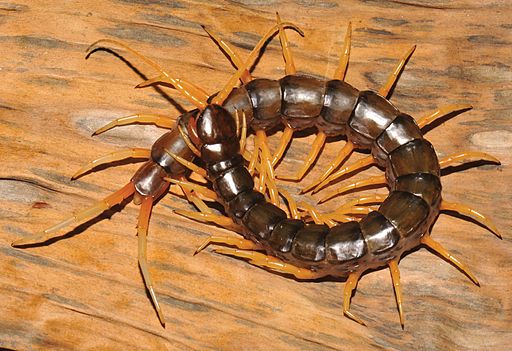 One of the unique traits of the Waterfall Centipede is that its outer coating is hydrophobic. This allows them to live more effectively on the water as their shell repels water. They can move just as swiftly in water just as they do on land. This allows them to avoid predators from the ground very easily. Waterfall Centipedes are known to hide under rocks in bodies of water.

The centipede was discovered by entomologist George Beccaloni. He came across the centipede near Khao Sok National Park in Thailand while he was on his honeymoon. 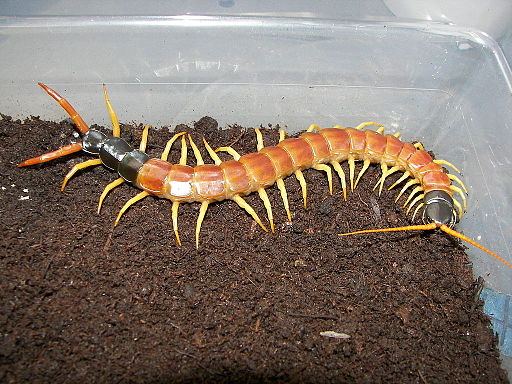 The Giant Desert Centipede holds the distinction of being the largest species of centipede in the US. They live in hot climates, such as in New Mexico and Arizona. However, they’re also often found in rocky woodland areas as well. They thrive in dry environments where they hunt small rodents, reptiles, and more.

These are nocturnal creatures that have venomous bites. They use their venom to sedate or knock out prey to make them easier to eat. The Giant Desert Centipede is very easy to distinguish thanks to its red head and yellow legs. They also have the most sets of legs in the giant centipede species, with them having up to 23 legs. Because of this, Giant Desert Centipedes are very nimble and hard to catch.

The Giant Desert Centipede isn’t the largest centipede. However, they have the most powerful jaws across all species of centipedes out there. 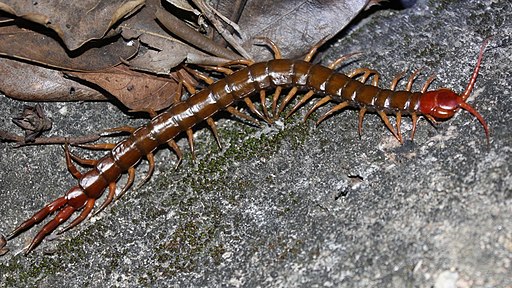 The Chinese Red-Headed Centipede isn’t something that’s feared in Chinese culture. In fact, it’s well-loved for its healing properties. In ancient times, the centipede is put on a rash or other skin disease. Doing this allegedly dries up the healing process. In Korean folk medicine, the centipede is roasted, dried, and pulverized the used as a treatment for back pain.

Beyond that, this centipede species is used in other aspects of medicine as well. In fact, it’s currently being studied as a possible means to control cancer cells in the human body.

While they’re used for medical purposes, Chinese Red-Headed Centipedes are still dangerous and venomous. As such, it would be wise to take caution with them still.

Another unique trait of the Chinese Red-Headed Centipede is that it shows little aggression toward other centipedes. Most species of centipedes are hostile against one another, but this one can be kept in communities so they can be harvested for medical purposes. 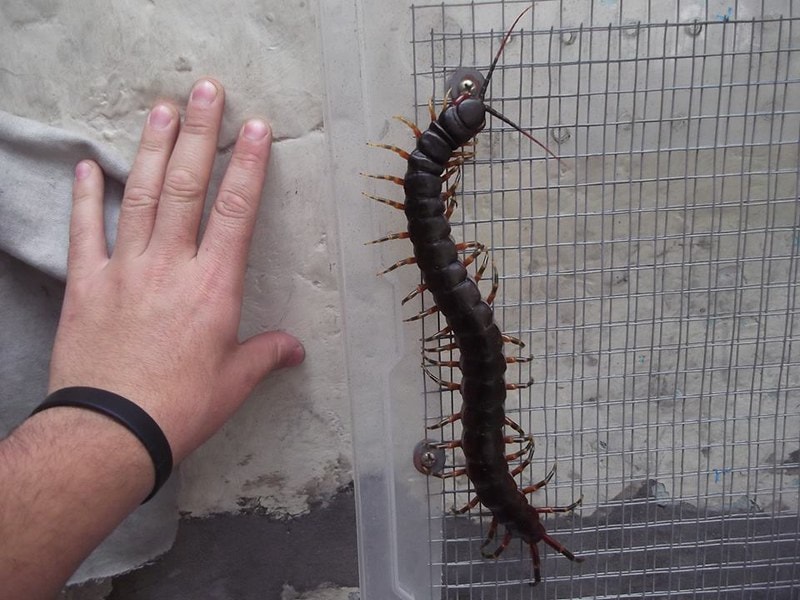 Despite its venomous nature, Darwin’s Goliath Centipede is popular among exotic pet enthusiasts. For them, the centipede is called the Dark Morph or the Orange Morph, depending on the color of their exoskeleton. It’s the deadliest centipede specie on the Galapagos Island, and that’s saying a lot considering that it shares the island with 11 other species.

The Dark Morph is very easy to recognize due to its large set of mandibles through which it administers its deadly venom. So far, there are no deaths have been attributed to the venom of this specie of centipede.

The creature was first discovered by Charles Darwin, the father of evolution. The Dark Morph is one of the thousands of specimens collected by him. 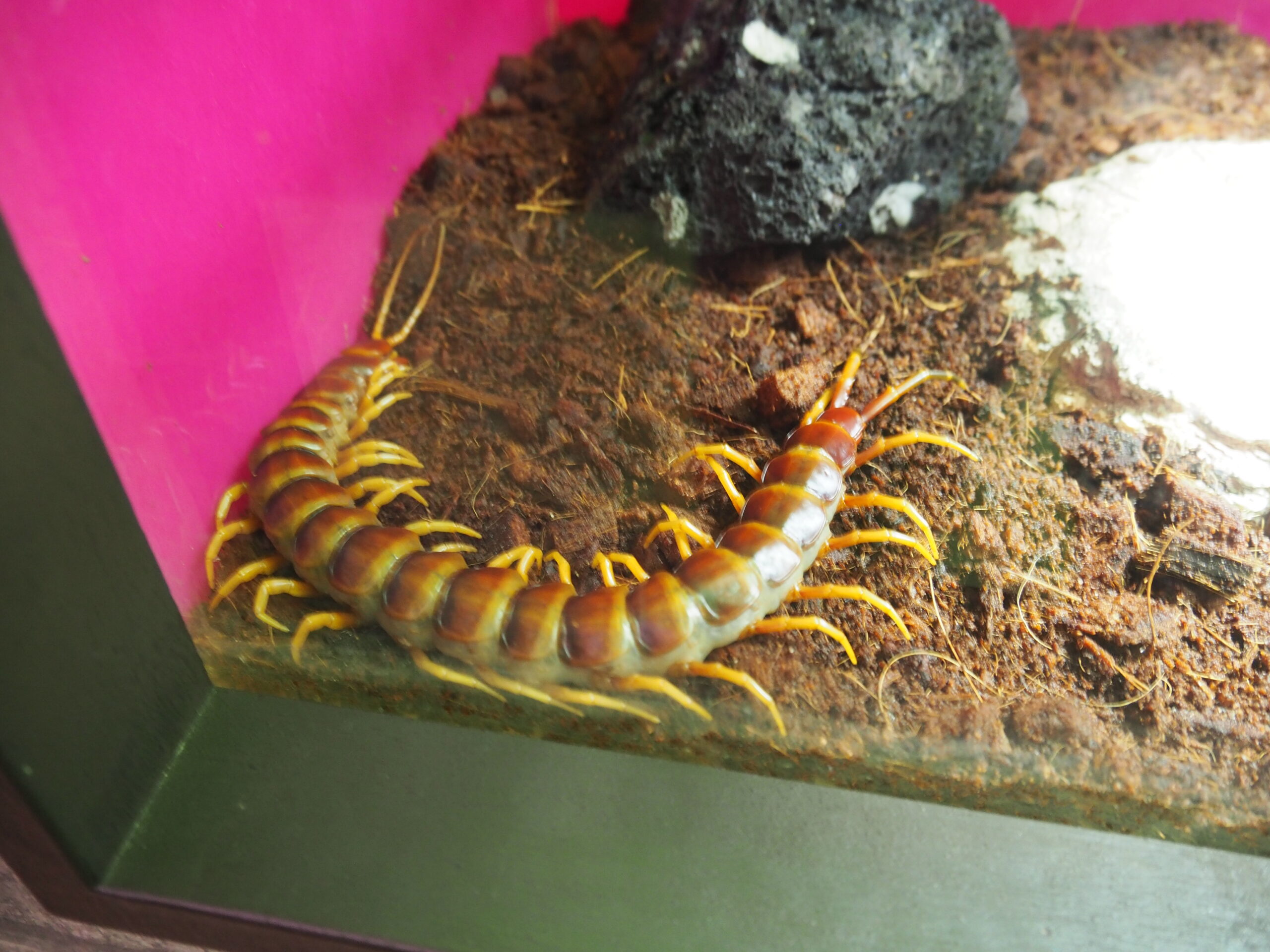 The Peruvian giant yellow-legged centipede is the largest centipede in the world, with a max size of 12 inches (30 cm).

Some experts believe there could still be other centipede species we’ve yet to discover. Though still small compared to other creatures in the animal kingdom, these centipedes are ferocious and deadly. In fact, they’re carnivores that eat reptiles, mammals, and more.

Whether in captivity or in the wild, the Peruvian giant yellow-legged centipede prefers to hunt alone.  They aren’t known for their venom, but it’s still worth noting that they’re not toys to be played with.

So far, there’s been one death that has been attributed to the venom from this specie of centipede.

This centipede specie can eat prey that’s up to 15 times its size! Its venom is fast acting which allows it to take down larger prey.