Whales are a diverse group. These creatures live in more than 70 countries and in every ocean on Earth. Today, we know more about these majestic creatures than ever before.

Whales have complex social behaviors and advanced cognitive abilities, such as self-awareness. Cetaceans are widely considered to be the second most intelligent group of mammals, after humans, based on their unusually large brains and complex social structures.

While many species of whales have been brought to the brink of extinction, there are still some amazing species we can watch in the wild today. The largest whale species in the world, based on weight & length, have been debated for decades. 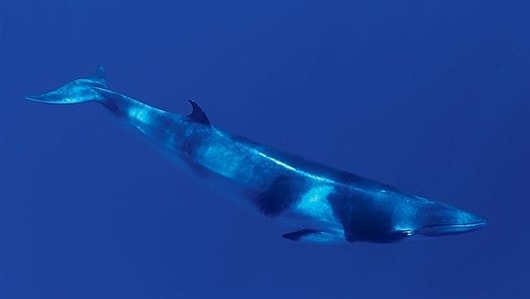 Although the Minke whale is the smallest whale on our list, it is nevertheless a large creature. These whales are typically dark in color, ranging from grey to black; some even have a violet tinge, and may reach lengths of up to 10.5 meters.

They reside in two main groups and have an average lifespan of 40 to 50 years. There are minke whales in the Northern Hemisphere and Antarctica. Although they are numerous in their many habitats, they are endangered by fishing, climate change, vessel collisions, and other factors.

The fact that minke whales have foul breath is one of the most well-known facts about them. Minkes are a fan favorite and can enhance the memory of a whale’s breath due to their diet. 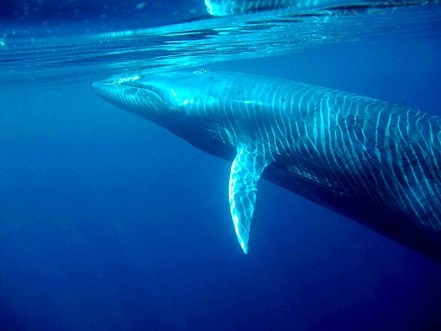 Another variety of baleen whale is the Bryde’s whale. Around the planet, warm seas are where it is frequently found. Maximum measurements for the whale’s biggest size are forty-six feet.

Two blowholes and no teeth are features of Bryde’s whales. These whales’ mouths are lined with rows of baleen plates instead.

The grey Bryde’s Whale may weigh approximately 13 tons and reach lengths of nearly that length. Although they may be spotted in bigger groups when eating, Bryde’s whales typically stay in pairs.

Johan Bryde, a Norwegian who assisted in establishing the first whaling station in South Africa, is honored by having his whale named after him. 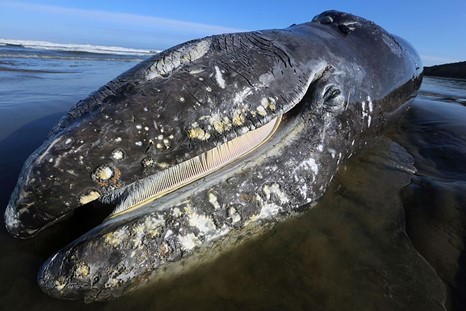 The gray whale’s combative tendencies have earned it the nickname “devil fish.” They weigh about 27 tons. They had been in the North Atlantic until being wiped off there, and they now dwell along the coast of California.

On the top of their heads, they have two blowholes that combine to produce a heart-shaped blow. The average lifespan of these whales is 55 to 60 years.

The ocean floor is where gray whales often forage because they are bottom feeders. where they spit out water and bottom-dwelling crustaceans while swallowing huge mouthfuls of silt. 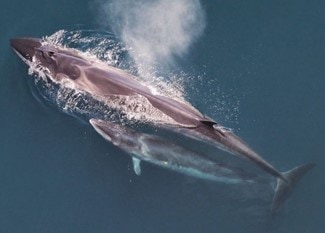 Baleen whales with subtropical, temperate, and subpolar habitats all around the world include the Sei whale. They may weigh up to 28 tons and can be distinguished from Bryde’s whales only slightly by their arched snout.

Their numbers declined during the 1900’s mostly owing to hunting. The National Oceanic and Atmospheric Administration estimates that 300,000 whales were reportedly killed during this time.

The Sei whale’s name is derived from the Norwegian word “seje,” which means “pollock.”

Typically, sei whales are seen on their own or in small groups of between two and five whales. They can swim at a rate of over 34 mph and are quick swimmers. 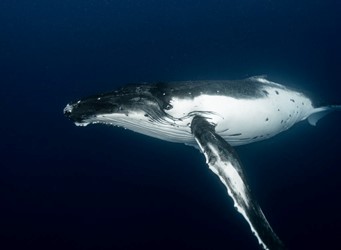 With its distinctive head shape and large pectoral fins, the humpback whale is one of the more recognizable whale species on the globe.

It is simpler to compare a humpback whale to other species of whale because of their distinct hump, from which they receive their name, and their black dorsal pigmentation. They are filter feeders, just like other whales. They consume krill and tiny fish.

Up to 20 kilometers distant, one may hear the melodies that male humpback whales compose and sing.

One of the largest whale species in existence is the bowhead whale.   With their big, strong heads, they can break through thick ice. Apart from a white area on the lower portion of their mouth, they are fully black.

Bowhead whales may reach a massive length of 18 meters and are found in the icy seas of the Arctic and Subarctic. Though some individuals may weigh as much as 54 tons, the weight of others is much more astounding.

The blubber of bowhead whales is the thickest of any whale species, measuring about 50 centimeters thick. 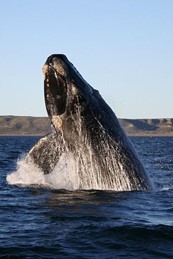 The right whale is distinguished by its spherical body, V-shaped blowholes, and very black skin. They received their moniker as a result of being singled out by whalers as the “correct” whale to harvest an abundance of flesh and blubber.

A typical right whale may reach a length of 18 meters, weigh up to 70 tons, or possibly slightly more. They may be identified by the rough skin patches on their heads that are the consequence of whale lice.

One of the whale species most in risk of extinction is the right whale. There will be about 350 people left in the world’s waters as of the year 2022. 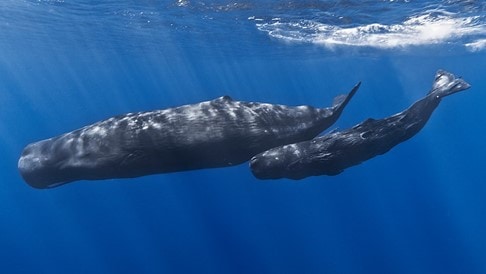 The sperm whale, the biggest of the toothed whales, is among the largest sea creatures. It is one of the few whale species that can survive in a variety of habitats and is thus present in oceans all over the world.

Male sperm whales are solitary creatures except from mating, while females move and live in groups. Sperm whales may weigh up to 56 tons and reach typical lengths of 67 feet (20.5 meters).

This species possesses the biggest brain of any animal and is the third-deepest diving mammal in the world. The oil spermaceti, which is a target of whaling, gave rise to the term.

In the 1800’s, sperm whaling was a significant industry that was detailed in the well-known book Moby Dick. 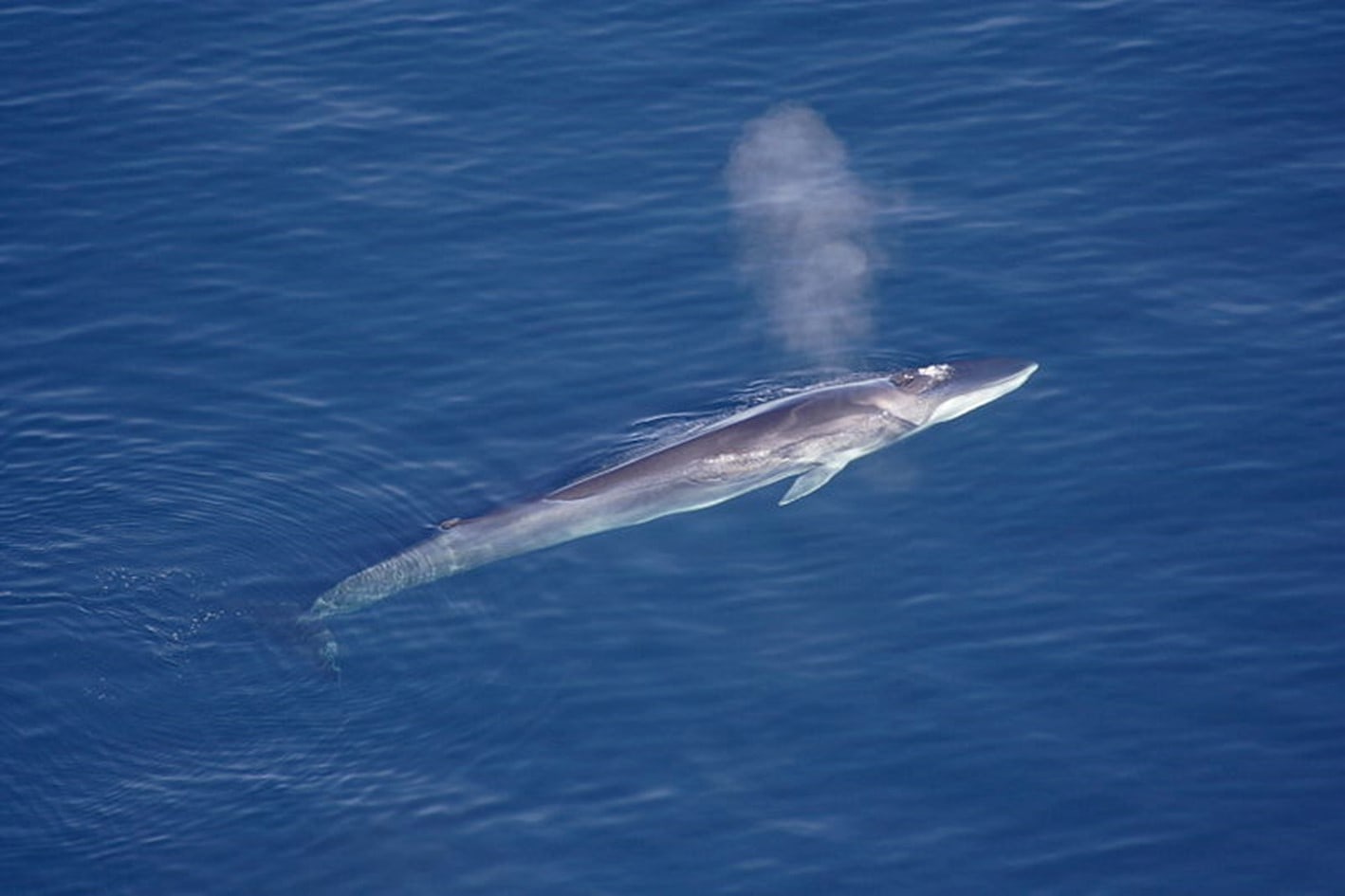 The second-largest species of whale in the world is the fin whale. It may dwell everywhere from the Arctic to the Pacific, but the fin whale prefers to breed in seas that are moderate.

Although these whales have a maximum weight of 72 tons and may grow to be about 27.5 meters long, they have a leaner body.

Throughout the 19th and 20th centuries, they were hunted. Approximately 725,000 fin whales were reportedly killed in the Southern Hemisphere during this time, according to NOAA estimates. Due to the cessation of commercial whaling in the 1980s, they are no longer in danger from it.

Fin whales have a strong respiratory system. With a single breath, fin whales may descend up to 450 meters below sea level. 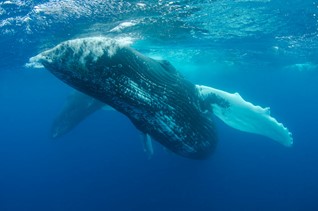 The blue whale is not only the largest whale species, but it is also the world’s largest known animal. Despite having a maximum length of 30 meters, blue whales have been reported to weigh as much as 150 tons.

Blue whales are dark blue in color, as their name would imply, with a lighter underbelly. In the course of their extensive migrations towards the Equator as winter approaches, they frequently spend the summers eating in arctic waters.

One of the species that live the longest on Earth is the blue whale. Using this technique, the oldest blue whale discovered was estimated to be roughly 110 years old. The average lifetime is thought to be between 80 and 90 years.

To put into perspective, a blue whale’s heart may weigh up to 600 kg. This is considered to be the size of a tiny vehicle or about 7 human beings. Their tongues can be as heavy as an elephant.