A fish is a sea-dwelling animal that consist of all gill-bearing aquatic animals that lack limbs. There are just over 30,000 extant species, ranging in size from small forage fish, such as herrings and sardines, to large apex predator species, such as bluefin tuna and sharks.

There are many kinds of fish in the world. Some of them grow to be long and wide, while others can only reach a few inches long. They come in a variety of colors, too. Some are simple yellow with spots on their bodies, while others seem to have neon color schemes.

The various types of fishes that inhabit the oceans, lakes, rivers and streams are numerous. While whales are the world’s largest living creatures due to their enormous size and weight, there are some fish species that can lay claim to being the largest in the planet.

This article is meant to introduce to you the largest fish species known to mankind, such as the Black Marlin and Whale Shark. The length and weight of each species have been included in the list. Without further ado, here are the ten largest fish in the world. 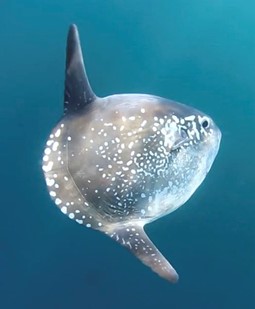 Hoodwinker Sunfish (Mola tecta), sometimes known as sunfish, is the world’s tenth biggest fish. This member of the Osteichthyes family has a flat elliptical form. It may weigh up to 1.87 tons and span 7.9 feet.

Scientists operating near New Zealand initially observed it only in 2014, but civilians in Chile, South Africa, and Australia have also reported seeing it.

This fish, which frequently dives hundreds of feet to get its prey, was difficult to identify since it prefers to reside in the cooler regions of Southern Hemisphere waters, where most humans do not venture. For years, experts have been unable to locate this little fish.

The Hoodwinker Sunfish is the first sub-species of sunfish to be discovered after 13 decades. 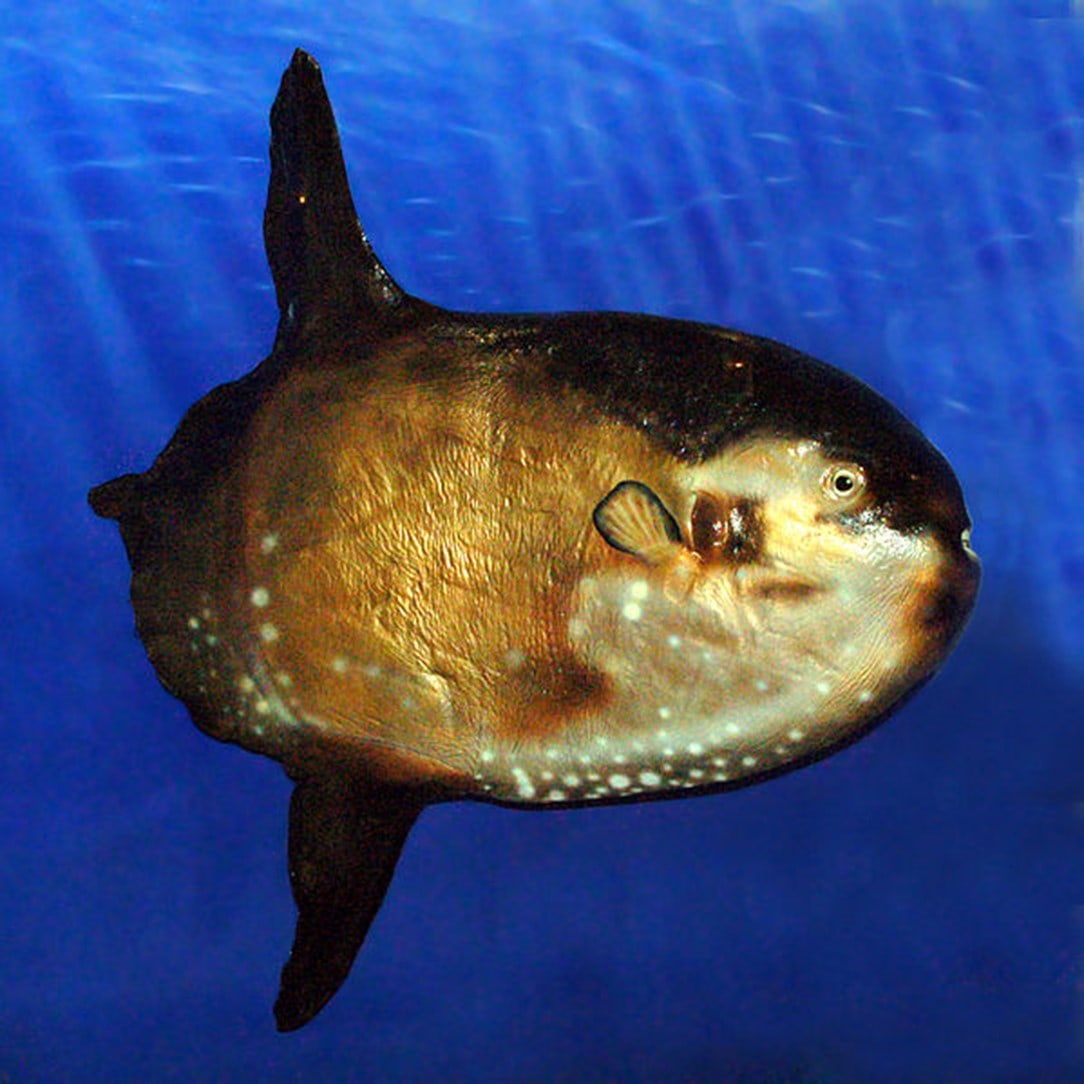 Sharptail mola (Masturus lanceolatus) can weigh up to 2 tons and grow to reach 10 feet long. In many aspects, this bony fish resembles an elliptical sunfish, but it has a sword-like projection in the middle of its tail.

It is found in tropical and temperate seas. Scientists don’t know much about its habits or the numerous places it may inhabit.

The biology and life history of the sharptail mola remain unknown because to its rarity. It has lately gained significance for commercial fisheries operating off the coast of eastern Taiwan.

This species is the sole representative of its genus. 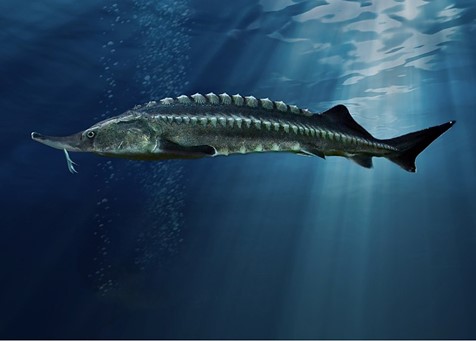 The Beluga sturgeon (Huso huso), often known as the huge sturgeon, may grow to be 24 feet long and weigh up to 2 tons. That is a gigantic fish in the ocean, and humpback sturgeons are generally the largest.

Because the beluga caviar is very much sought after, it is unfortunate that their habitat has been decimated due to exploitation. The Beluga Sturgeon is now critically endangered. 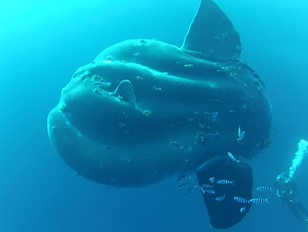 The southern sunfish (Mola alexandrini), is also known as the Ramsay’s sunfish, the Southern Ocean sunfish, the short sunfish, or the bump-head sunfish. It may weigh up to 2.3 tons and span 11 feet. They navigate across the water by laying horizontally and using their massive fins.

It is not uncommon to find these fish resting on their sides just beneath the water’s surface in the waters of the Southern Hemisphere. Meanwhile, gulls consume the parasites that have been discovered on them. This might also be done to enhance the amount of oxygen in their bodies.

The Southern Sunfish is the largest species of the genus mola. 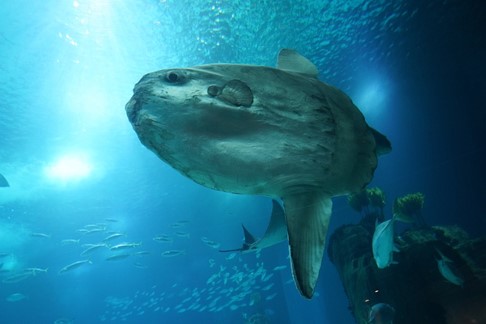 The ocean sunfish (Mola mola), also known as the common mola, is ranked sixth on our list. This fish, which dwells in tropical and temperate seas all over the world, has a big head and a skinny body that may grow to be 10 feet long.

Females frequently generate 300 million eggs at once, the most of any vertebrate. In Taiwan and Japan, this gentle fish is considered a delicacy. Because of its massive size, it frequently jumps out of the water, causing occasional watercraft mishaps.

The ocean sunfish compensates for its lack of a tail by using modified dorsal and rear fins for quick propulsion. 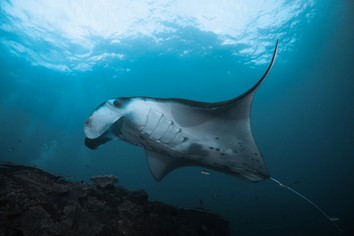 The Giant Oceanic Manta Ray (Mobula birostris), commonly known as the Atlantic manta ray, may grow to be 15 feet long and weigh 3 tons. It has a wingspan of up to 30 feet. The majority of this species, which is the world’s biggest manta ray, lives in tropical and subtropical seas.

These disc-shaped fish with smooth skin have been discovered as far north as New Jersey and as far south as South Africa.

Giant Oceanic Manta Rays also have enormous brains. They have the highest brain-to-body ratio of any cold-water fish. As a result, their intelligence may be equivalent to that of dolphins, primates, and elephants. 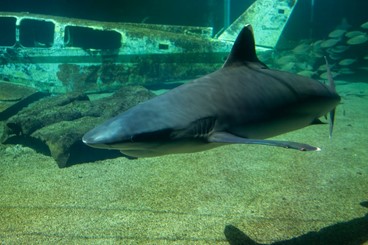 The tiger shark (Galeocerdo cuvier) may grow to be 24 feet long and weigh up to 3.2 tons. This shark, the only member of the Galeocerdo genus, is commonly found around Middle Pacific islands, but it can be seen in any tropical or temperate sea.

Tiger sharks are extremely violent, and they are only second to the great white shark in terms of the number of humans they have subdued. While many people think of this fish as a slow swimmer, it is a large fish in the ocean that can achieve great speeds to get its meal.

Tiger sharks like to remain alone. Because of overfishing, the International Union for Conservation of Nature has classified this shark as nearly threatened. 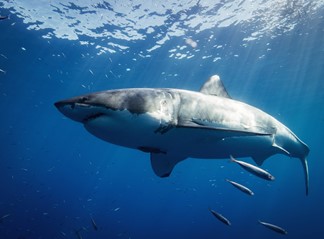 The Great White Shark (Carcharodon carcharias), often known as the white shark or pointer shark, may weigh up to 3.34 tons and reach lengths of up to 23 feet. These sharks may live for up to 70 years.

These sharks can attain altitudes of 3,300 feet deep and move at speeds of up to 16 miles per hour. The great white shark is notorious for being violent, and it is responsible for more human attacks than any other species. It is the sole known member of the Carcharodon genus.

While this shark may be found all over the world, one of the most densely inhabited locations is near Dyer Island in South Africa. They can find their prey by using the electromagnetic field.

Female great white sharks bear children to between two and ten pups every litter, and occasionally as many as fourteen. 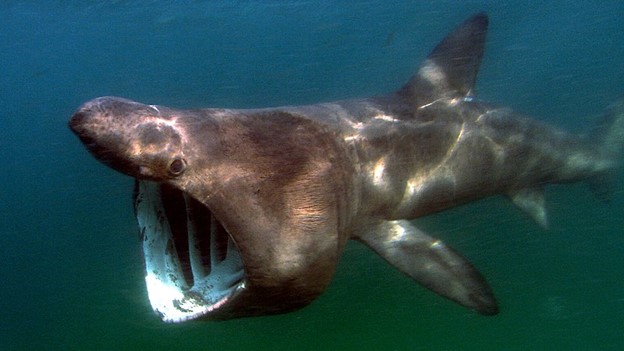 The basking shark (Cetorhinus maximus) is the world’s second-largest fish. It can be up to 40.3 feet long and weighs more than 4.2 tons. It is one of the world’s three plankton-eating sharks.

This shark, which can be found in warm seas all around the world, gets its name from the fact that it looks to be basking in the water when feeding. They prefer to live alone, however there have been accounts of them residing in small groups.

Sightings are typical near the continental shelves, but scientists have discovered that they occasionally cross the equator using monitoring devices.

The biggest basking shark ever measured weighed 8,598 pounds and was over 30 feet long. 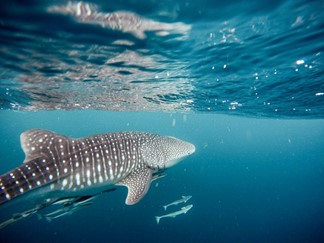 This shark thrives in tropical seas with temperatures exceeding 70 degrees Fahrenheit. It is found around coasts and in open sea. This shark feeds on filters.

While it spends much of its existence alone, there have been multiple accounts of up to 400 people congregating around various sites, notably off the Yucatan Coast.

The largest whale shark ever measured scientifically weighed 47,000 pounds. It measured 41.5 feet long. On November 11, 1949, it was captured near Pakistan.