Movies like Jaws are a humbling reminder that there are some terrifying creatures lurking beneath ocean waters. And while movies tend to over-dramatize things, there’s no denying that some sharks can reach truly monstrous sizes!

So, just how large can these intimidating creatures get? Today we’ll be looking at the 10 largest shark species in the world and ranking them according to length. We’ll also learn some fun facts about the unique habits and behavioral patterns of each one! 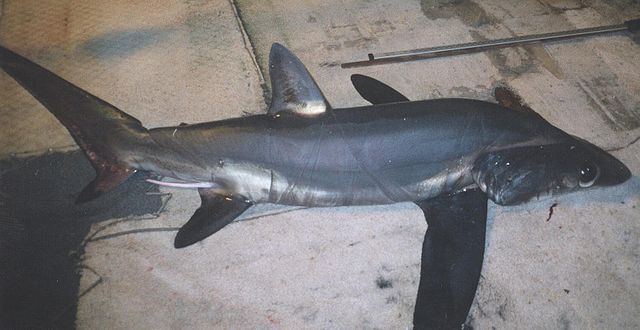 This species of Thresher Shark is unique in that it has unusually large, striking eyes that inspired its name. The Bigeye Thresher often inhabits the coastal waters located above continental shelves, although they don’t hesitate to hunt in far deeper waters. In fact, these sharks have the remarkable ability to raise their own body temperature a few degrees above that of the surrounding waters, protecting their organs against the cold so that they can dive deeper!

The Bigeye Thresher Shark’s huge, puppylike eyes are adapted for seeing in the low light levels of deeper waters. 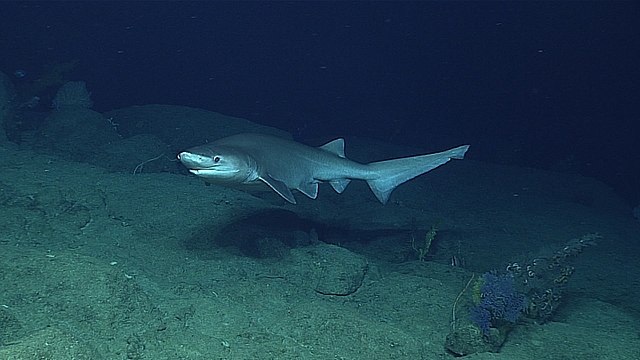 This big fish is often nicknamed the Cow Shark and is the largest of all the hexanchoid sharks or “primitive sharks” which retain builds similar to those found in fossils from the Triassic period. The Bluntnose Sixgill is a nocturnal ambush hunter, and is generally very little threat to humans due to its preference for deep waters.

This shark is unique in that it only has one small dorsal fin which is located very far down on its back. 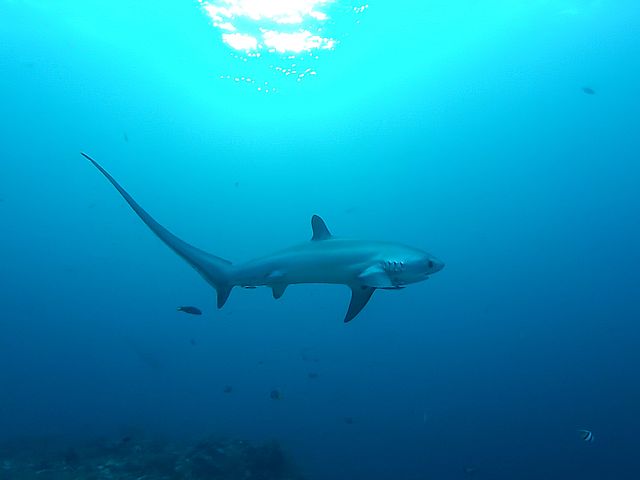 The most immediately noticeable feature of the Long-Tailed Thresher Shark is its amazingly long tail, or caudal fin. The caudal fin often makes up as much as half the Thresher’s total body length, and has been known to injure divers with its natural whiplike movements. It is theorized that the sharks sometimes use this long fin to stun their prey.

While the Long-Tailed Thresher’s eyes aren’t as large as those of the aforementioned Bigeye Thresher, they’re still quite large and are noted as a defining characteristic of the species. 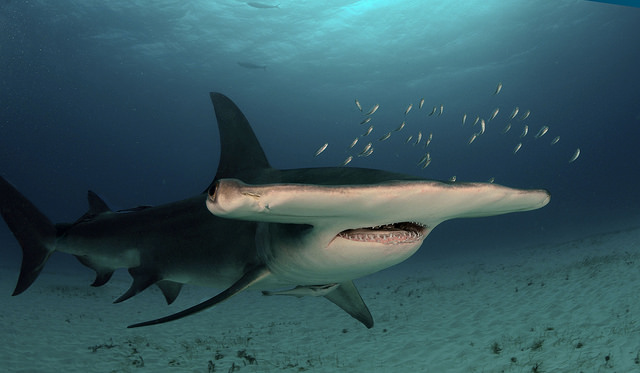 This is the largest of all 9 species of Hammerhead Sharks, which are named for their highly unusual head shapes and wide-set eyes. While other varieties such as Scalloped Hammerheads are more social, the Great Hammerhead Shark keeps to itself and tends to migrate for surprisingly long distances on an individual basis.

While it’s still somewhat of a mystery how Hammerhead Sharks evolved their uniquely-shaped heads, scientists have observed that their wide-set eyes make them into excellent hunters. 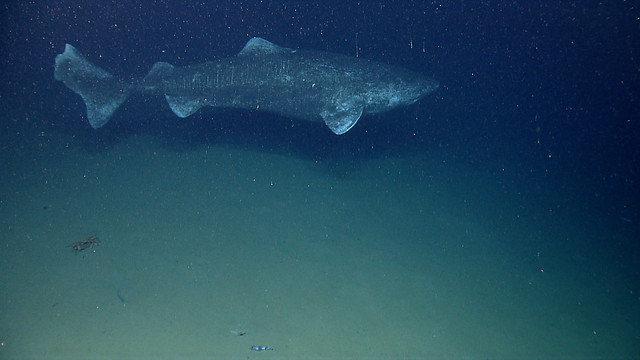 This hefty variety of “sleeper shark” has the longest life span of any known vertebrate, living for 400 years or more! The Greenland Shark tends to move quite sluggishly through the Arctic waters that it inhabits, feeding upon a variety of just about any carrion they can find.

The Greenland Shark’s flesh is quite neurotoxic to humans and dogs, causing symptoms similar to extreme drunkenness in humans and incapacitating sled dogs. The meat is hung out for months to let the toxins dissipate before consumption. 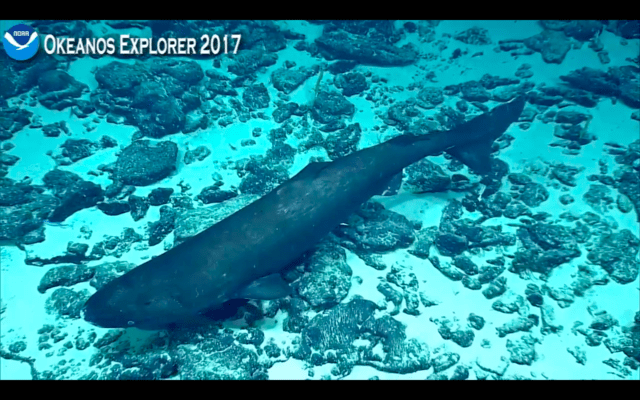 Similarly to its relative the Greenland Shark, the Pacific Sleeper Shark is known to be both a hunter and a scavenger, willing to eat just about anything conveniently available. These sharks also have a surprising gut capacity, frequently eating huge amounts of food. Relatively little is known about these sharks and they’ve rarely, if ever, gotten into any altercations with humans.

Pacific Sleeper Sharks rely primarily on their sense of smell to hunt, since their eyes are small and often infested with a cornea-eating parasite known as Ommatokoita elongata. 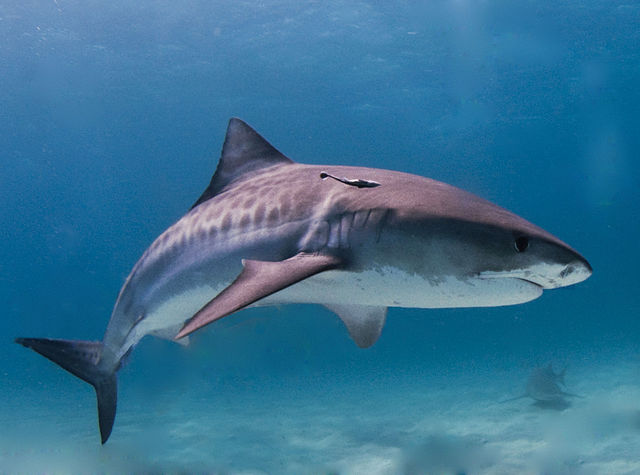 The Tiger Shark is a requiem shark and is said to be one of the most dangerous sharks to humans. Not only do they account for more shark bites than any other species besides the Great White Shark, but they’re also less likely to swim away after attacking. These sharks will eat almost anything including marine mammals, crustaceans, and even garbage.

Tiger Sharks keep to themselves until the mating period, when they converge in groups to establish an order of dominance with surprisingly little violence towards one another. 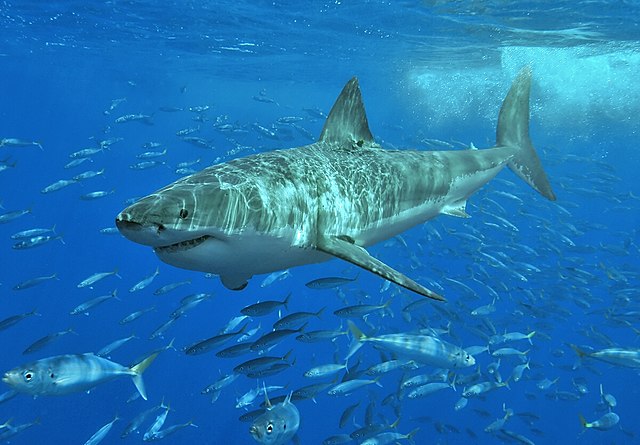 This massive species of mackerel shark is known to account for up to one-half of all shark attacks experienced by humans, earning them a grim reputation. However, Great White Sharks have more discerning tastes than the similarly-aggressive Tiger Sharks, often “sample biting” and then losing interest in its human victims immediately afterwards. For this reason, few attacks by Great Whites are fatal.

The Great White Shark has a more complex circulatory system than many other sharks do, which conserves the heat from its muscles and empowers it to frequent very cold water. 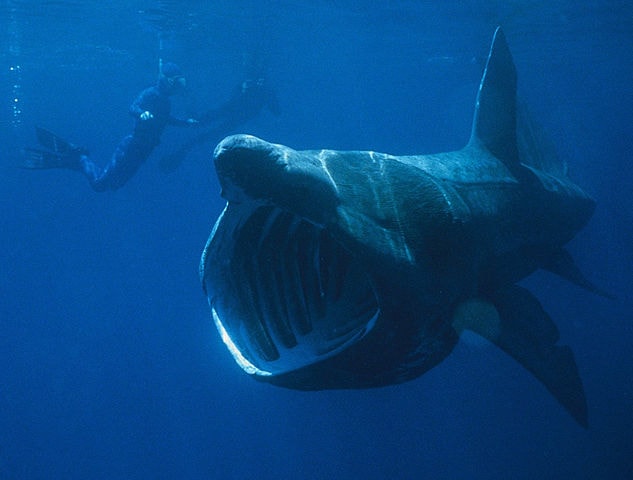 The Basking Shark is quite the gentle giant compared to most of the other shark species on this list, with a distinctly passive temperament and a plankton-based diet. Its huge, gaping mouth and pronounced gill rakers enable it to strain its food from the water almost constantly while it swims throughout oceans all around the world. The Basking Shark’s migratory patterns tend to follow its food supply.

The Basking Shark gets its name from its tendency to feed near the surface of the water. 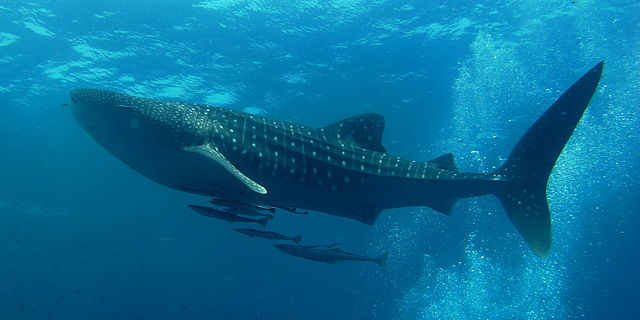 Whale sharks are the largest sharks in the world by both length and weight. They feed on plankton, and frequently wind up having to travel vast distances to find enough to nourish their massive bodies. Whale Sharks feed in the same manner as Basking Sharks do, swimming with their mouths agape in order to passively collect tiny zooplankton from the water.

Whale Sharks are usually solitary, but have been found in groups made up of hundreds of specimens!