Although there are about 300 known species of octopus in the world, they are considered some of the most mysterious animals. Very few octopus species have been well-documented, so it’s hard to know which ones are actually the largest. Additionally, octopuses dramatically range in size from a few grams to over a hundred pounds. For example, the smallest of the large octopuses on this list weighs less than 10 pounds while the largest specimen from the biggest known species (Giant Pacific Octopus) reportedly weighed 600 pounds! At the time of this writing, these are some of the largest known octopuses in the world by weight. 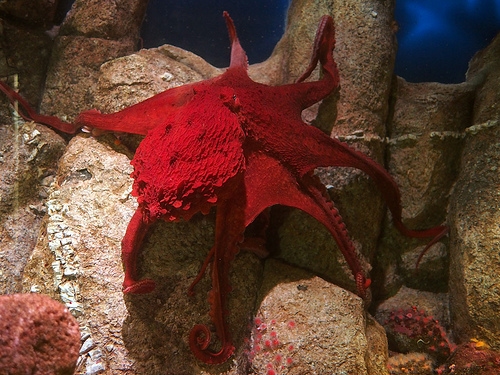 The Southern Red Octopus or Patagonian Giant Octopus is another member of the Enteroctopus genus, which is often called the giant octopus group. However, the Southern Red Octopus is very small compared to the other members of Enteroctopus and only grows up to about 8.81 pounds (4 kilograms) – this is still “big” compared to many other octopus species.

The Southern Red Octopus is native to southeastern coast of South America, which is also known as the Patagonian Coast. This octopus is aptly named and is often a very vibrant red color.

The lifespan of the Southern Red Octopus is dependent upon when an individual mates as they typically die not long after mating or laying eggs. 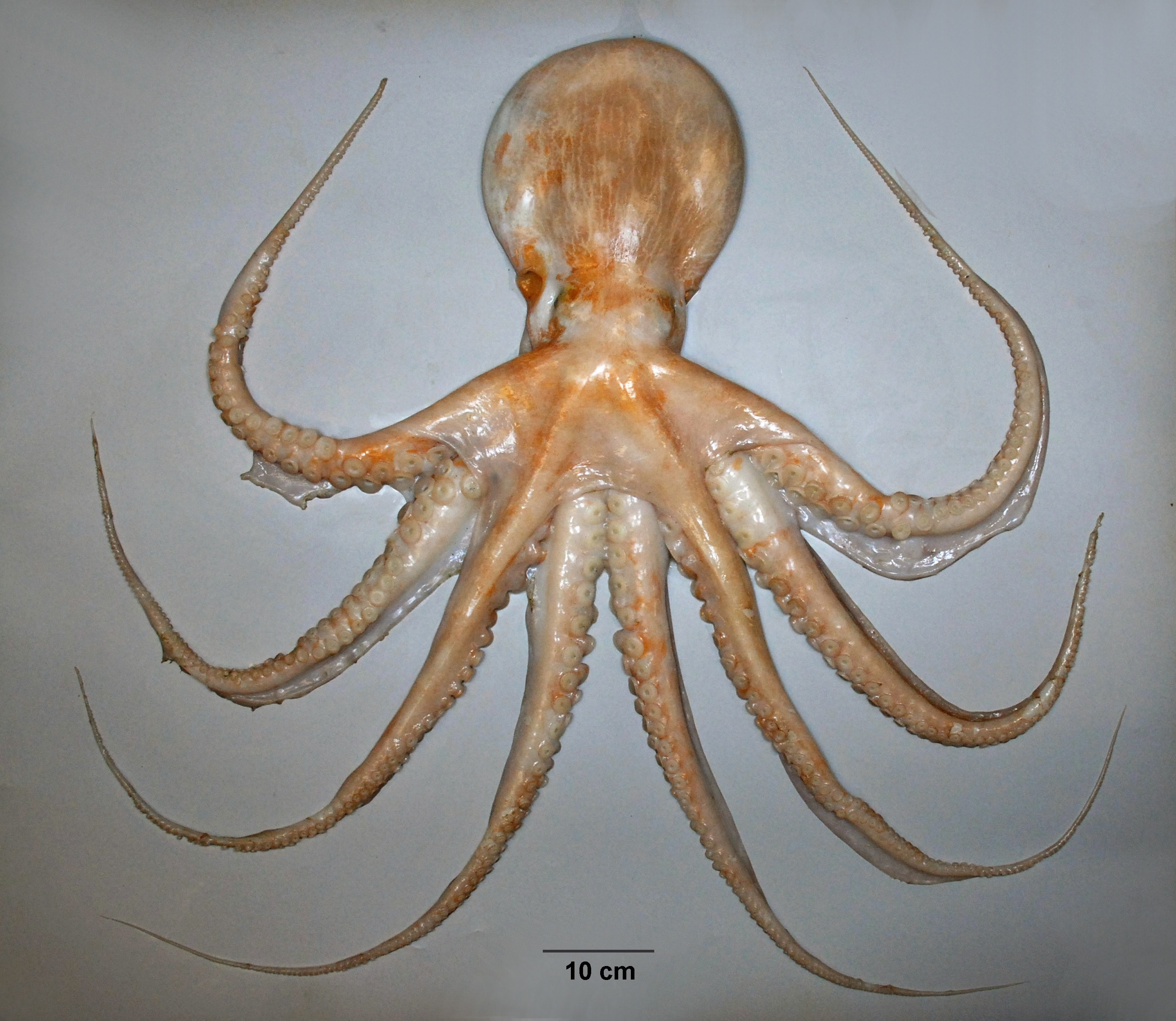 Like some of the other members of the giant octopus genus (Enteroctopus) not much is known about the Yellow Octopus, which is native to the waters around New Zealand. According to the National Institute of Water and Atmospheric Research (NIWA), only about 50 specimens of Yellow Octopus have ever been collected despite being large and abundant.

With so few samples, scientists have no idea how big the Yellow Octopus can actually grow. The largest Yellow Octopus specimen on record weighed about 11 pounds (5 kilograms) and was 4.6 feet (1.4 meters) in length. In recent years, there have been more efforts to conduct more research into the Yellow Octopus.

Scientists believe that the sea lions around New Zealand eat about one million Yellow Octopuses each year. 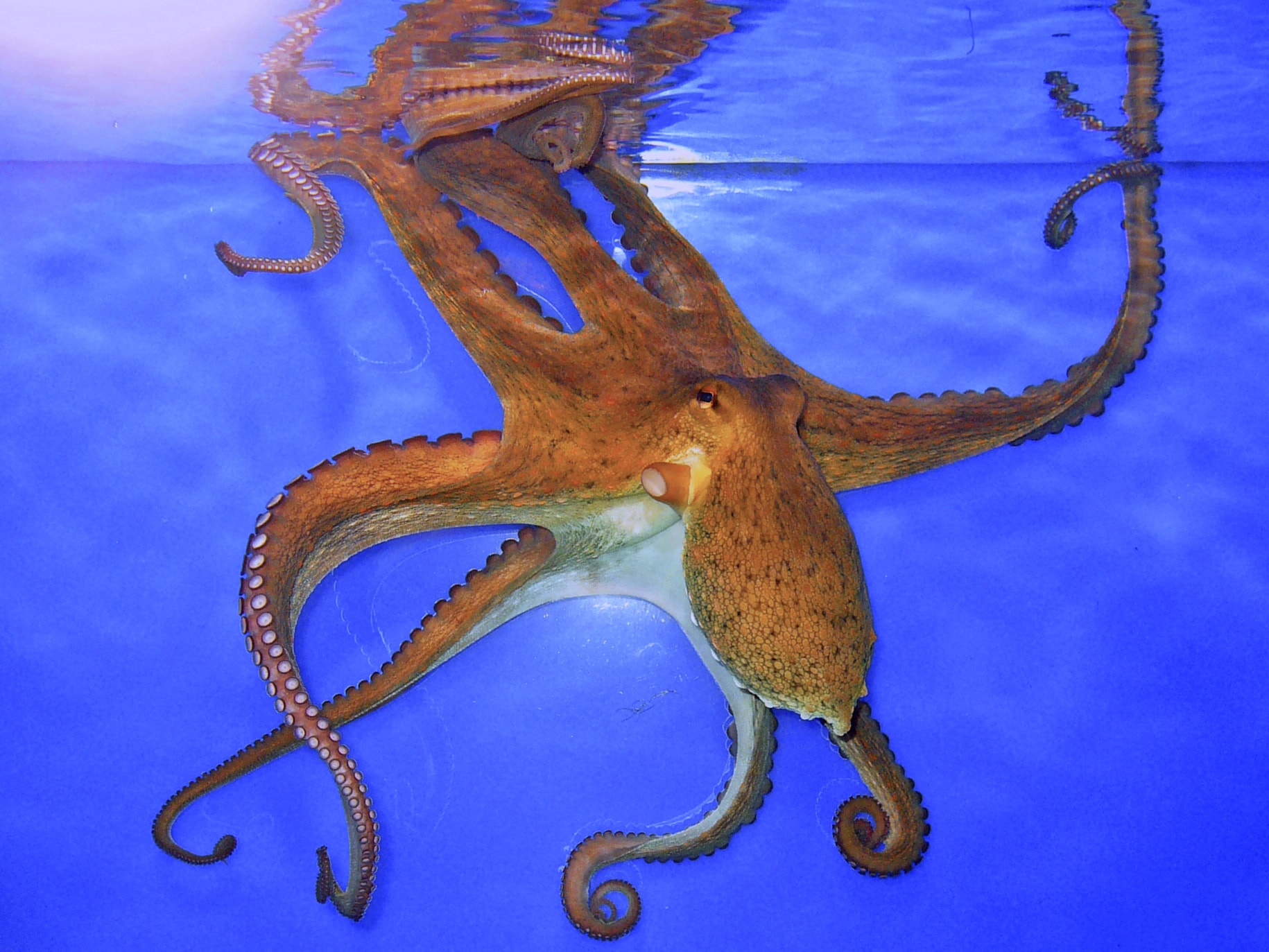 The Common Octopus, like its name suggests, is the best known and most studied species of octopus in the world. Despite being eaten by people around the world, the Common Octopus is quite abundant and can be found in waters across the globe.

The size of Common Octopuses varies wildly and they can be as small as 6.6 pounds (3 kilograms) or as large as 22 pounds (10 kilograms). While they can weigh quite a lot, Common Octopuses are not that large in terms of length – they only range between 12 – 36 inches (30.5 – 91 centimeters).

The Common Octopus, like all known octopus species, has three hearts.

[ Average Weight: up to 25 lbs
Average Length: up to 6 ft
Average Lifespan: Estimated to be about 1 year
Distribution: Off the coast of Namibia and South Africa

Despite not being scientifically observed much, the Southern Giant Octopus is a common by-catch of the trap fishery of spiny lobsters in South Africa. 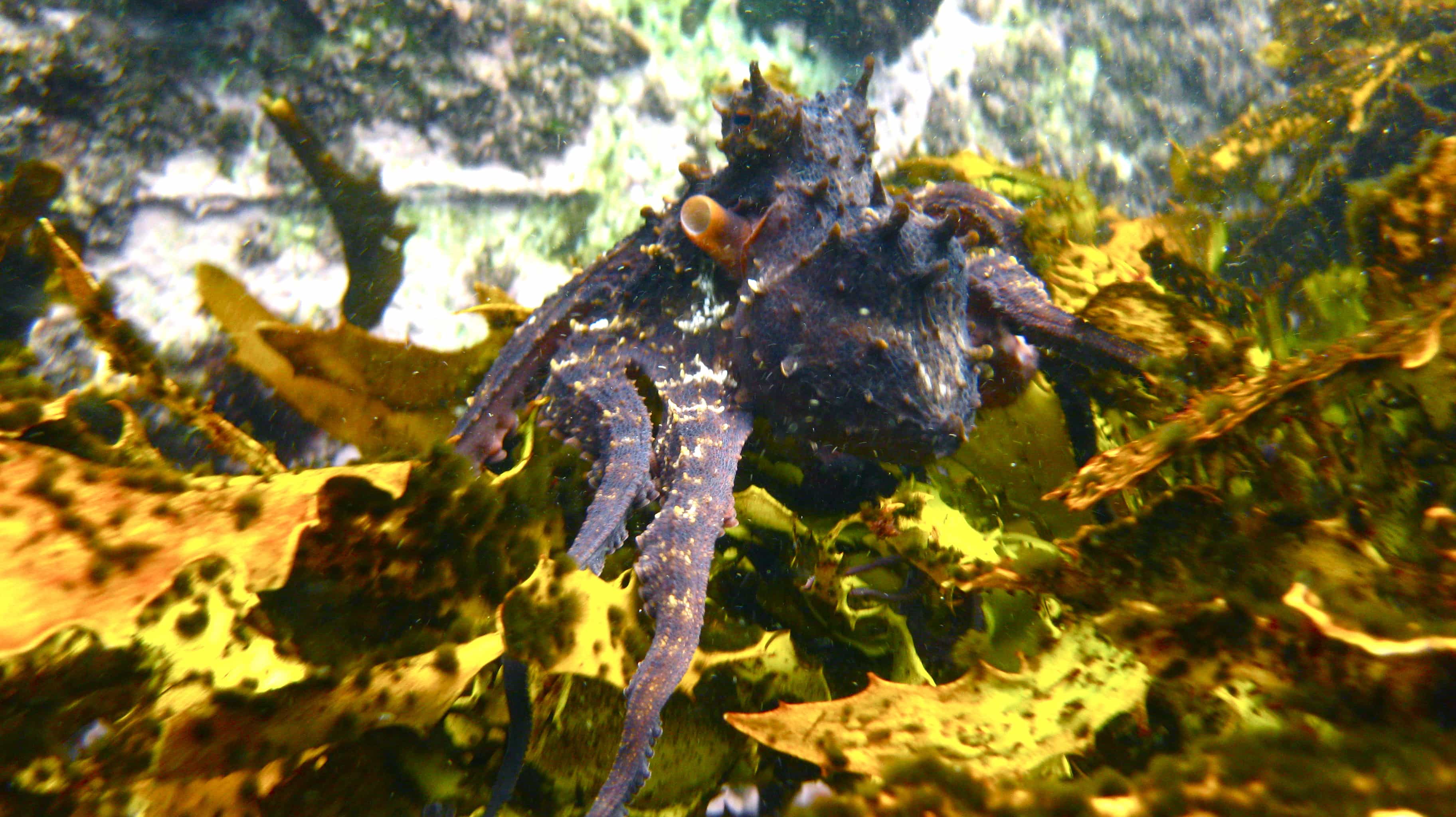 The Maori Octopus is a medium-sized octopus that is native to the waters around New Zealand and southern Australia. Similar in size to the Southern Giant Octopus, the Maori Octopus weighs between 22 – 26.5 pounds (10 – 12 kilograms) and is between 3.3 feet – 6 feet 7 inches (1 – 2 meters) in length.

Maori Octopus like to prey on rock lobster and is considered a hardy and aggressive species of octopus. 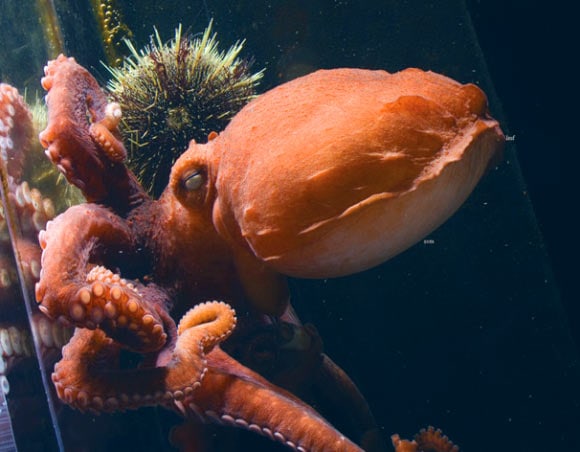 As its name suggests, the males of the Seven-Arm Octopus species appear to only have seven arms because the eighth is small and hidden in sac behind its right eye. 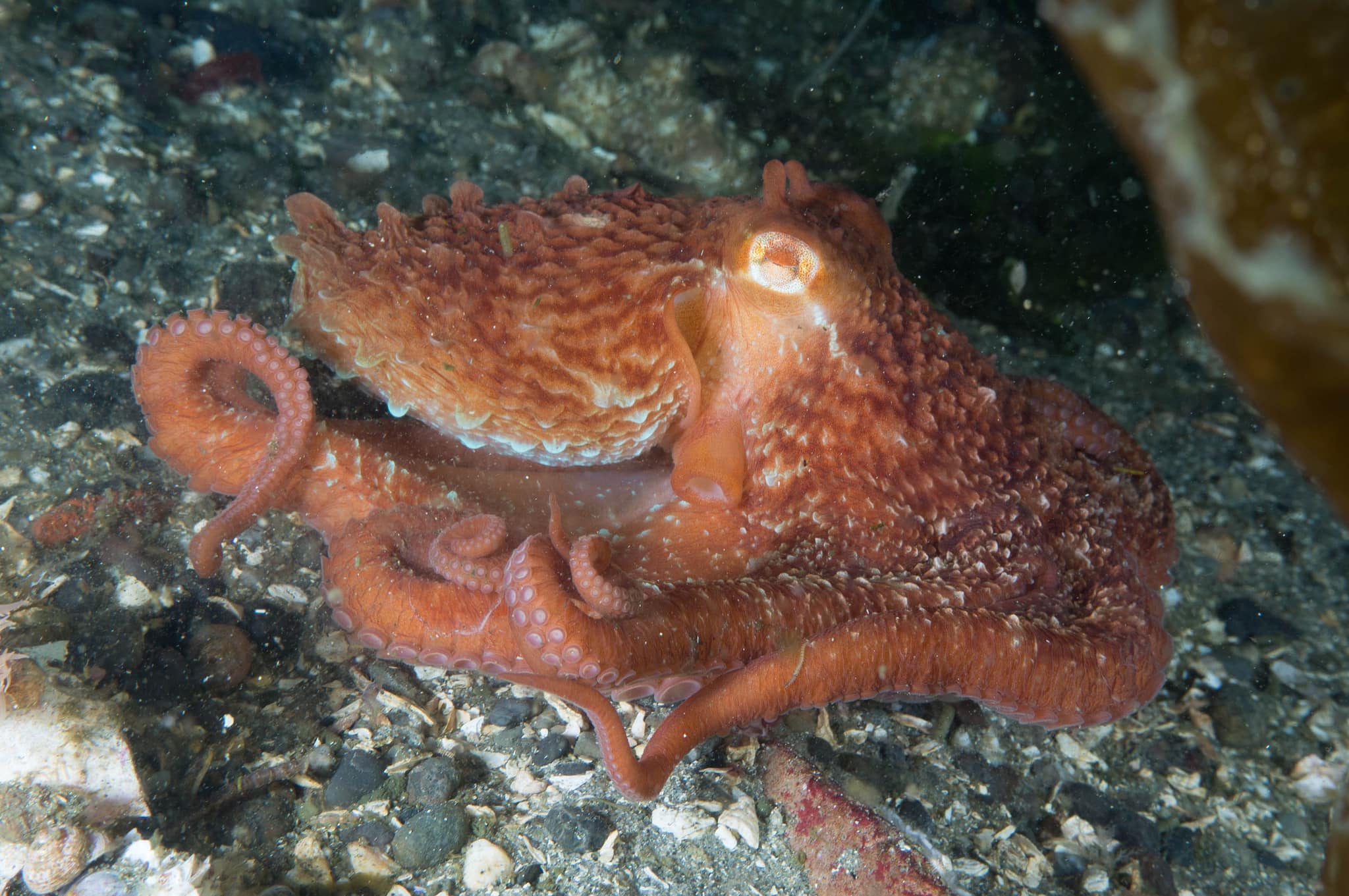 According to National Geographic, the largest known Giant Pacific Octopus specimen weighed more than 600 pounds (272.15 kilograms) and was 30 feet (9 meters)! In addition to being the biggest, the Giant Pacific Octopus also lives longer than any other known octopus species (they only live between 3 – 5 years, which is considered long because most octopus die shortly after breeding).

Pacific Giant Octopus are some of the most intelligent animals in the world and have the ability to solve puzzles, open jars, and even recognize its caretakers in captivity.