Pumpkins are known for their hardiness in the garden, as well as for their versatility in the kitchen–and they’ll grow as large as you’ll let them if the conditions are right. While the idea of a pumpkin large enough to accommodate a full-grown person might seem like the stuff of fairy tales, the sizes that pumpkins can actually grow to might surprise you!

So, just how big have the largest record-breaking pumpkins gotten? Today we’ll look at 10 of the largest pumpkins in the world, ranking them by weight and learning some fun facts about how these garden giants came to be. 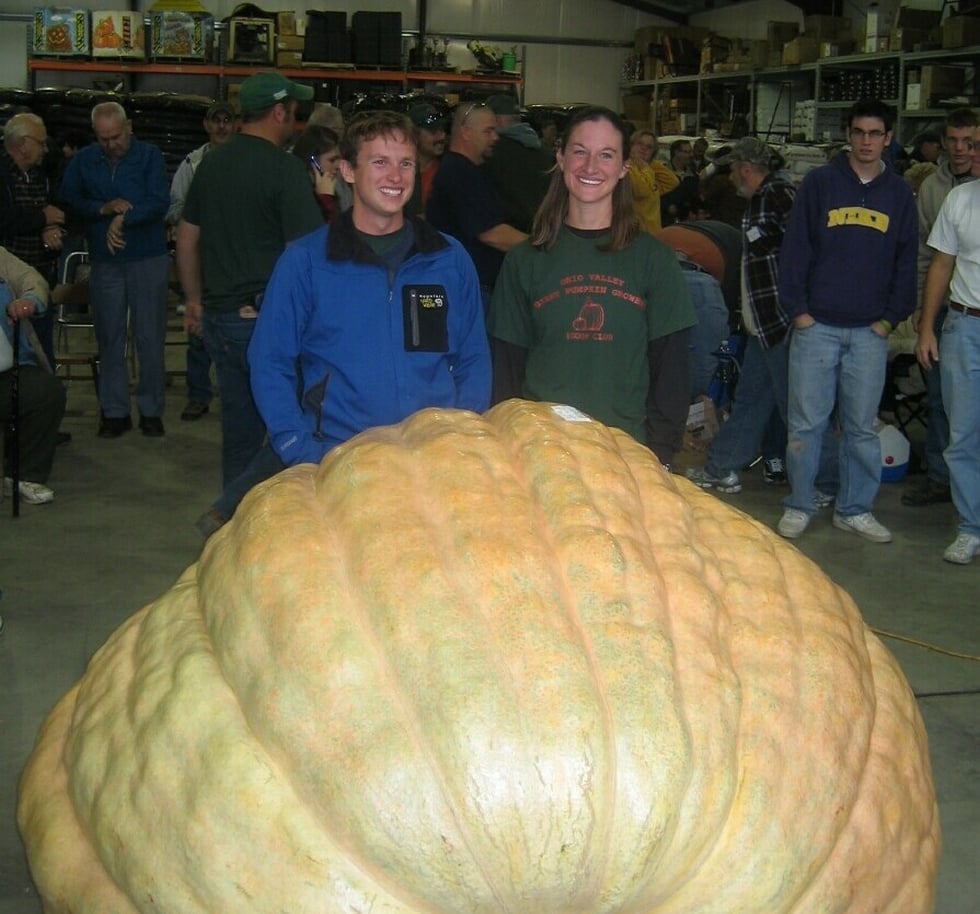 High school math teacher Christy Harp set herself up for success with farming giant pumpkins by having a friendly, private pumpkin-growing competition with her husband each year. She said that her secret was a combination of extremely diligent weeding and hours of other gardening tasks each day. She also pointed out that she and her husband Nick never set foot in one another’s garden plots or interfered with each other’s processes.

Christy Harp stated that, at one point, her record-breaking pumpkin was growing at a rate of 33 pounds a day! 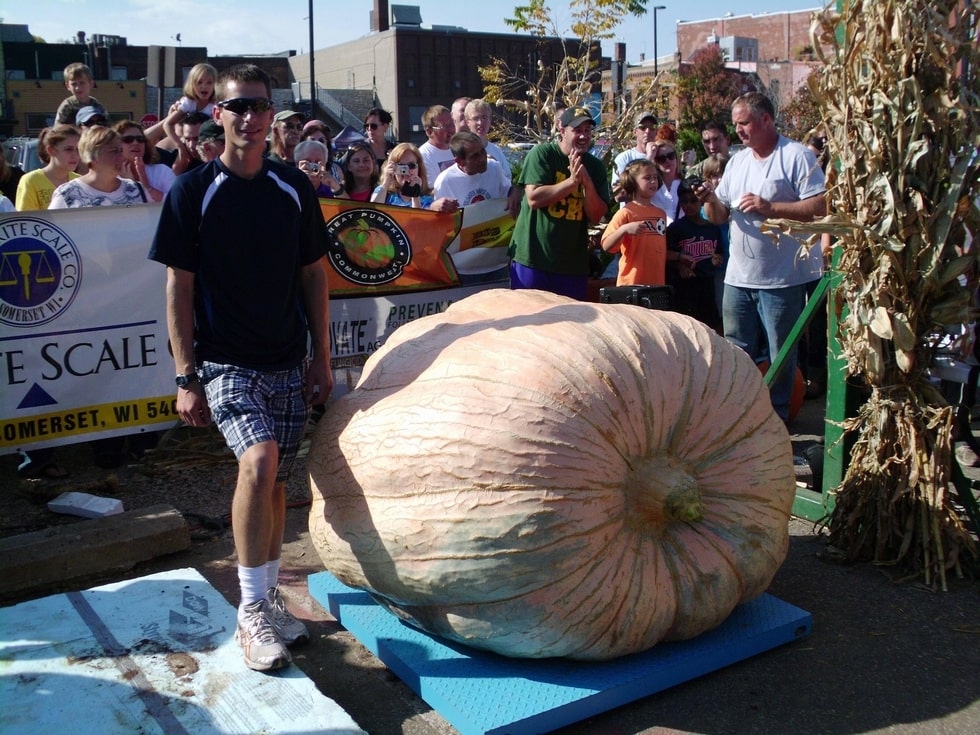 Chris Stevens drove from New Richmond, Wisconsin to deliver this huge pumpkin, and enjoyed a big cheer from the crowd when its record-breaking weight was announced. Stevens grew three pumpkins that summer whose total combined weight broke the threshold of 4,800 pounds or more. He and only one other pumpkin grower in the history of the hobby shared that achievement! 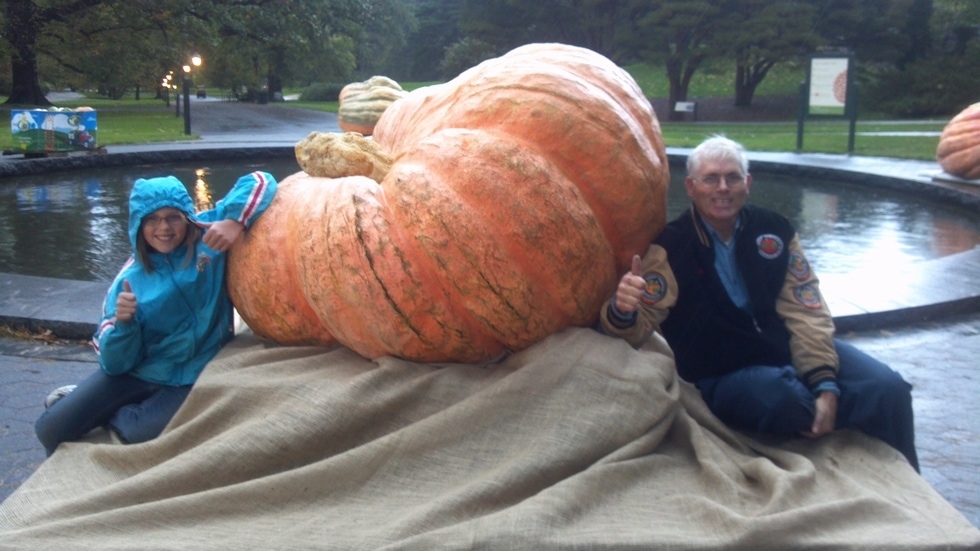 Growers and onlookers waited on pins and needles to hear the record-setting weight of Jim and Kelsey’s giant pumpkin announced at the County Pumpkinfest in Wellington, Ontario. After delays in the announcements due to difficult weather, the weight turned out to be approximately 100 pounds greater than expected considering the tape measurement.

Jim Bryson says that his trick for growing such a large pumpkin was that he fed it a diet of maple syrup. 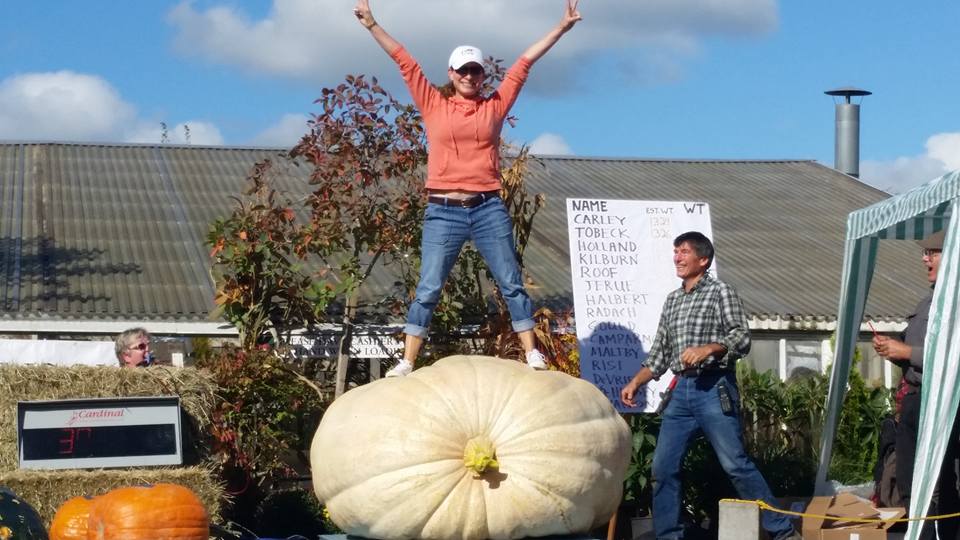 Third-grade teacher Cindy Tobeck says that the secret to growing a huge pumpkin is starting with the right seed–and the fact that she managed to grow a pumpkin heavier than a U-Haul gives her plenty of credibility! For further comparison, her pumpkin weighed nearly as much as the average Clydesdale horse, and could provide enough pumpkin for more than 600 pies.

Tobeck said that winning the world championship was a dream come true, since she’d been “enchanted with giant pumpkins” ever since childhood. 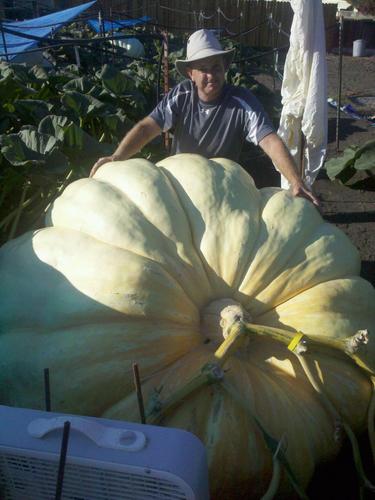 Russ Pugh began his foray into pumpkin-growing contests with a 129-pound entry over a decade before growing California’s largest pumpkin. He took his low placement in the results as motivation to do better, and went on to enter the Elk Grove Giant Pumpkin Festival for 12 years. During the same year as his record-breaking pumpkin win, Pugh also won the squash category with an impressive 995-pound specimen.

Alongside bragging rights, Pugh got $7 for each pound of winning pumpkin, which added up to a hefty sum of $13,611.50. 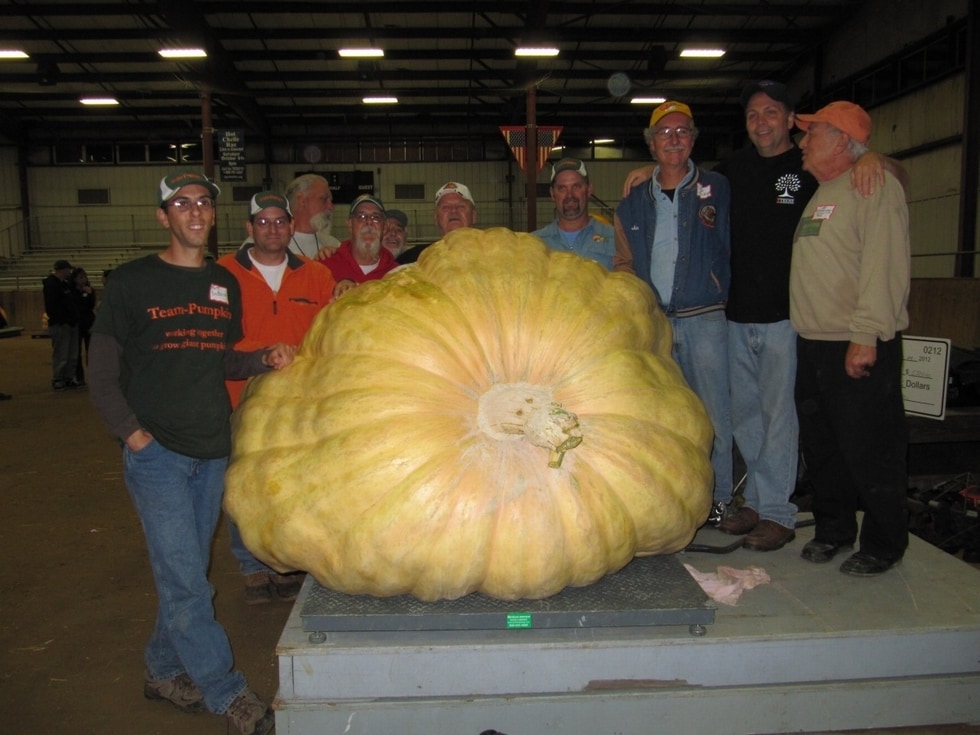 Ron Wallace made history when his giant pumpkin successfully broke the one-ton threshold–a feat that had previously been considered completely unfeasible. Wallace was thrilled when the weight was announced, but showed no signs of slowing down. He’s said that his next goal was to grow a 2,500-pound pumpkin from the seeds of his first record-breaker.

Wallace believes that the openness of the internet was a huge factor in his ability to reach the one-ton threshold, and encourages other aspiring pumpkin growers to do lots of research as well. 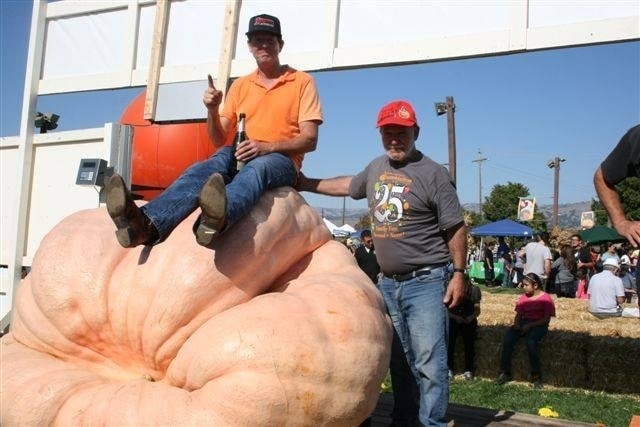 Tim Mathison was dubbed the Great Pumpkin Commonwealth’s Grower of the Year alongside setting a new world record with his most massive pumpkin. The three entries that earned him the Grower of the Year award added up to an astounding total of 5,800 in weight.

Mathison started growing his award-winning pumpkin with the “2009 Wallace,” a seed harvested from Ron Wallace’s pumpkin that broke the one-ton threshold. 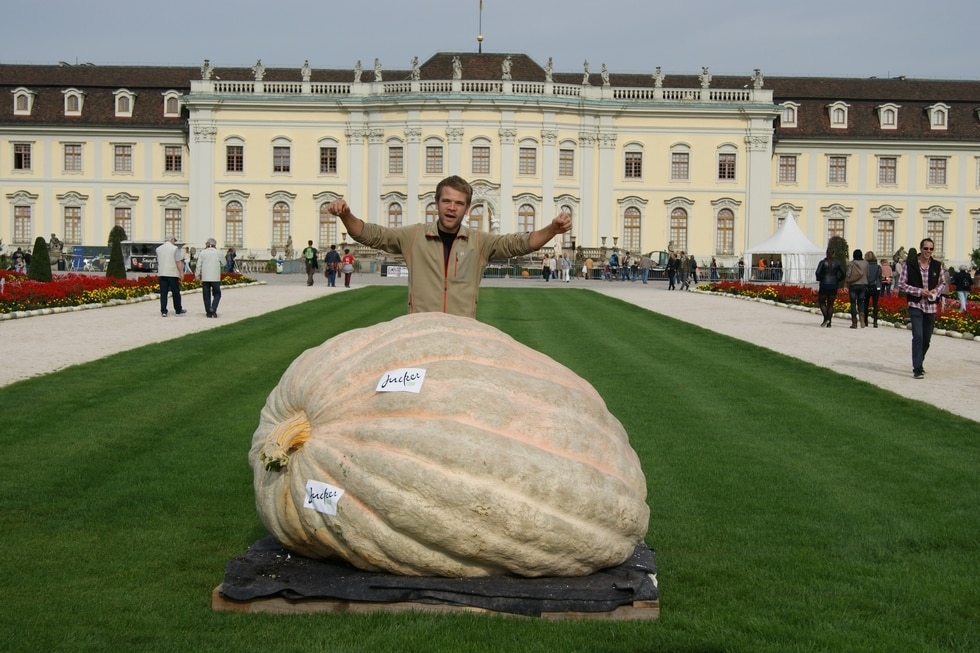 Swiss accountant Beni Meier accomplished an astounding feat by growing three record-breaking giant pumpkins in as many months! Most headlines skip right to his final record-breaker, but Meier built up to his 2,323.7-pound behemoth with two pumpkins weighing 2096.6 pounds and 2102 pounds. Meier’s biggest pumpkin was 84 days old when it won the championship.

Beni Meier’s largest pumpkin is comparable in weight to a small car. 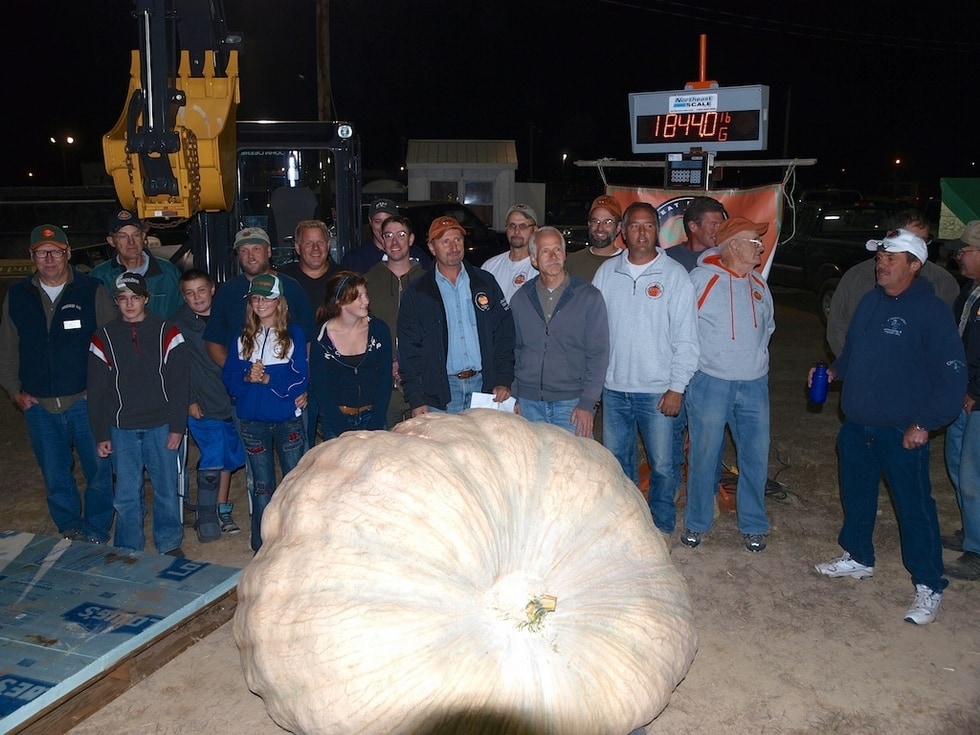 Steve Geddes scoffed when he first heard about growing giant pumpkins, saying that he preferred to stick to crops that he could eat. However, curiosity got the best of him and he found himself hooked on the idea of farming huge pumpkins, wondering how large he could get them to grow. Geddes’ curiosity and willingness to experiment paid off when he grew the largest pumpkin ever recorded in United States history! 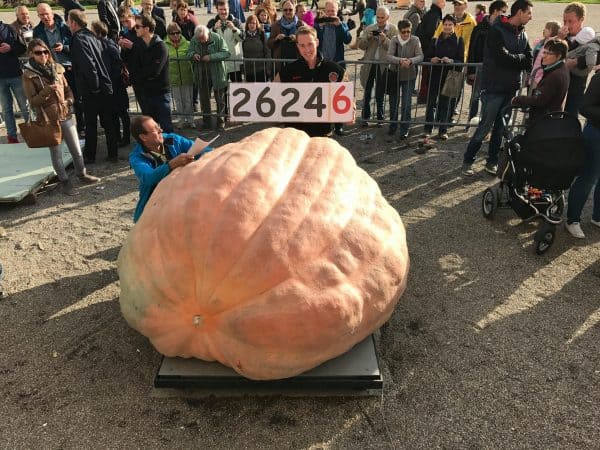 Mathias Willemijns’ pumpkin is the largest pumpkin in the world by weight. While a 2,500-pound pumpkin was once considered unreasonable to expect, this jaw-dropping giant topped previous records easily when it was authenticated by the Great Pumpkin Commonwealth. This pumpkin towered over the competition, weighing significantly more than a Volkswagen Beetle.

Willemijns won $11,460 for breaking the world record with his pumpkin, at a rate of $6 per pound.