It’s no secret that people love to come together to enjoy food, drinks, and good company while watching live sports! Massive stadiums have been built in numerous different countries to host both local games and international sporting events, giving people the opportunity to view exciting matches that might otherwise be inaccessible.

With thrilling events like the Olympics and World Cup competitions drawing in fans from countless destinations, how large can sports stadiums get? Today we’ll be learning some fun facts about 10 of the largest sports stadiums in the world and ranking them according to their official seating capacities.

This impressive football stadium consistently hosts games featuring Club América and the Mexico national football team. The stadium was actually built specifically with Club América in mind, as well as the 1970 World Cup on the horizon. It’s elevated an impressive 7,200 feet above sea level, which makes it difficult for visiting teams to acclimate without arriving very early.

The first goal scored in Estadio Azteca was during a friendly match between Club America and Torino FC in 1966. 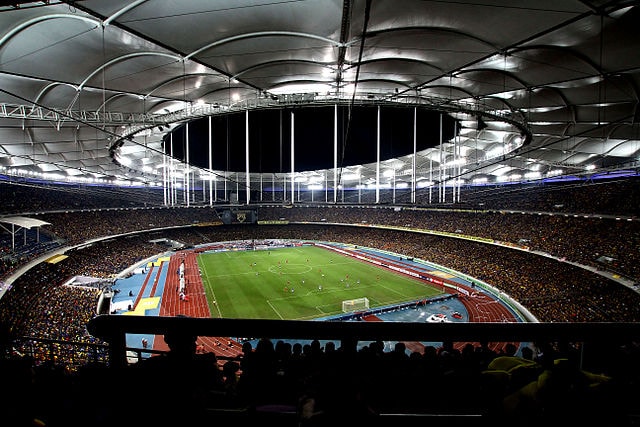 This sports stadium serves as the homeground for the Malaysian national football team and is known for its visually impressive setup. The Bukit Jalil National Stadium is larger by far than any other stadium in the country, and is the largest in Asia. The stadium is also currently undergoing renovations that will boost its seating capacity even further! The projected future capacity of the stadium is 110,000 once renovations are complete.

The Bukit Jalil National Stadium was named “Stadium of the Year” in 2018. 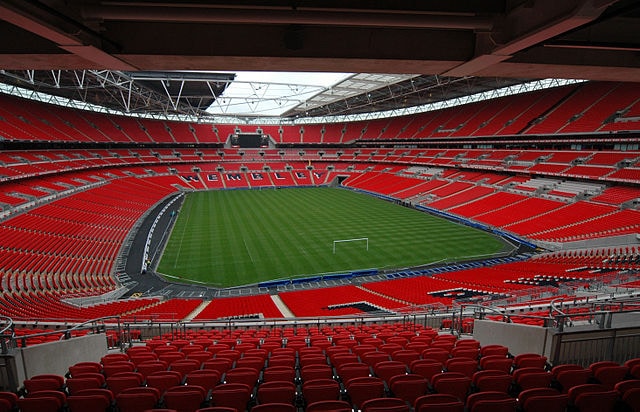 This popular, world-famous stadium was constructed on the same site as the original Wembley Stadium or “Empire Stadium” that was built back in 1923 and later demolished in 2002. A number of prestigious events are hosted in the Wembley Stadium including the FA Semi Finals and Cup Final and The Rugby Football League Challenge Cup Final.

The Wembley Arch that crowns the stadium is 440 feet fall, serving as a visible and widely-known landmark in London. 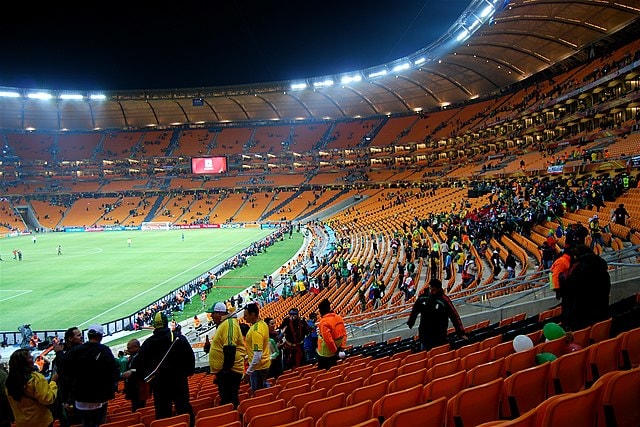 The “Soccer City” stadium hovered at a fan capacity of around 80,000 seats for several years until it expanded to its current numbers in preparation for the 2010 World Cup. It is located right next to the headquarters building of the South African Football Association and is highly regarded for its aesthetic appeal. Locals fondly refer to it as “The Calabash” for its bowl shape.

The original FNB Stadium had only one section with elevated seating, which was located on the west side and reserved for wealthier fans. 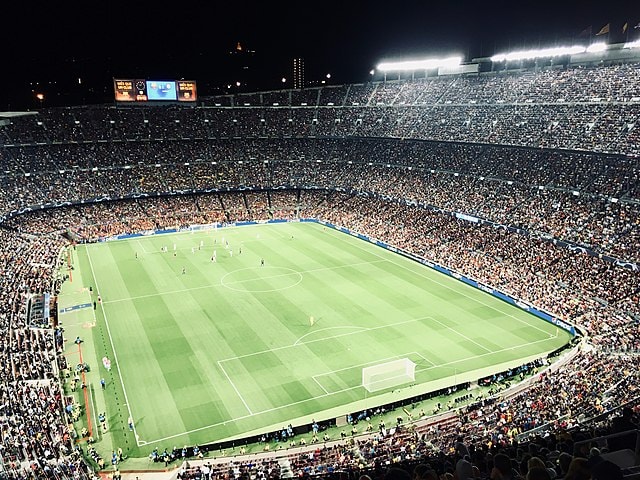 Camp Nou is the home of FC Barcelona, and is the largest stadium in Spain and in Europe as a whole. FC Barcelona’s motto is “Més que un club” which translates into “More than a club,” and the stadium has become a cultural icon of Catalan. It was almost vacated in favor of a new one due to prohibitive renovation costs, but was successfully redeveloped in 2014.

The first player to score at Camp Nou was Eulogio Martínez, and the first official match was played in October of 1957. 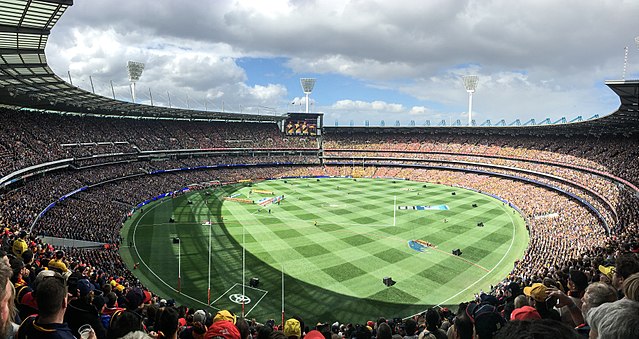 The Melbourne Cricket Ground has served as the main stadium for the 1956 Olympic Games and the 2006 Commonwealth Games, as well as World Cup qualifiers and rugby matches. The Victorian Football League’s championship, which is called the Grand Final, was consistently held at the Melbourne Cricket Ground as well. This stadium is one of the most famous cricket stadiums in the world!

Australian Rules Football is often played on a modified Cricket grounds, which is why the Melbourne Cricket Ground is so easily able to accommodate both sports.

Kyle Field is located right on the Texas A&M University campus and has served as the home grounds of the Texas A&M Aggies football team since before it was even a formal stadium. Back when Kyle Field was just a set of school-funded bleachers and a playing field, its seating capacity was only 500. However, after a massive renovation from 2013-2015, the stadium is now the largest in Texas.

The largest number of fans to pack into the Kyle Field stadium for a match was 110,633. 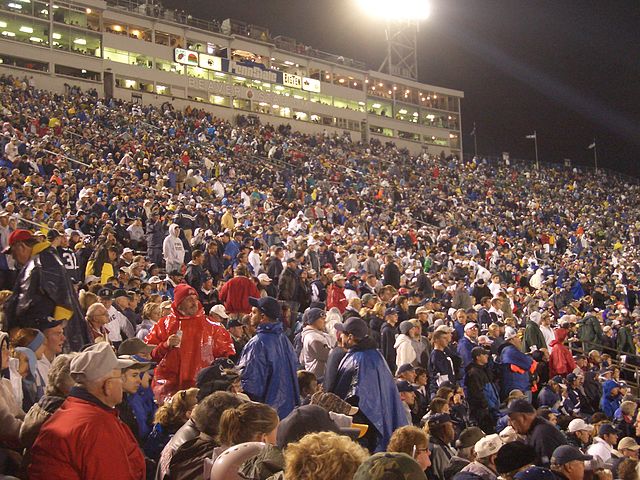 The Beaver Stadium is the second-largest in the Western Hemisphere and has served as the home of the Penn State Nittany Lions since 1960. The original stadium was only able to seat 30,000 people, and the original bleachers were moved in 700 pieces to be used as part of the new stadium!

The Beaver Stadium isn’t named after the animal, but for former Pennsylvania governor and president of the Pennsylvania State University’s board of trustees: James A. Beaver. 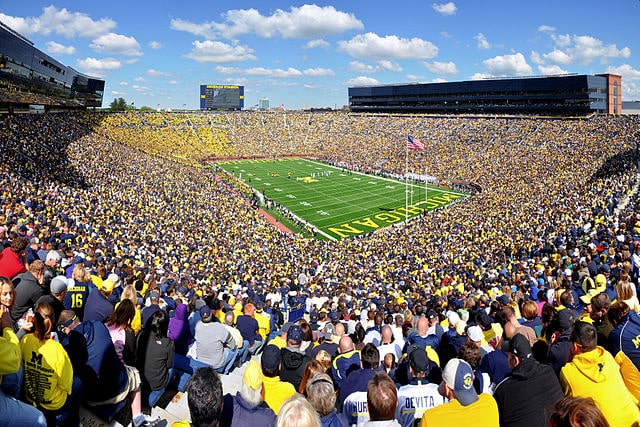 This stadium is nicknamed “The Big House” and serves as the official football stadium for the University of Michigan. It’s uncertain when the Michigan Stadium was first given this nickname, but running back Allen Pinkett referred to it as The Big House in 1985 and ABC Sports broadcaster Keith Jackson popularized the nickname even further.

Michigan Stadium is home to the Wolverines, and used to have two live wolverines as mascots before they got too mean to keep around. 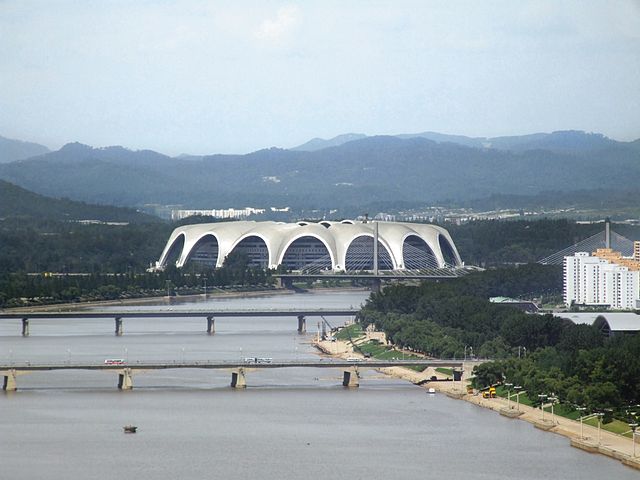 The Rungrado 1st of May Stadium is the largest sports stadium in the world by official fan capacity. It underwent a significant remodeling in 2014 and its elaborate, imposing concrete structure is meant to demonstrate North Korea’s might. It was originally built to compete with Seoul’s Olympic Stadium, and took a surprisingly short construction period of two and a half years to build.

The 13th World Festival of Youth and Students was the first major event to be held in The Rungrado 1st of May Stadium.