A lighthouse represents strength and dependability. It’s been relied upon by sailors and fisherman alike to show them the way home, to point them in the right direction, and to warn mariners of the shallow and rocky coasts that lay ahead. They stand tall and firm as a tangible light at the end of the tunnel.

The message of a lighthouse is clear. To proceed with caution or to stay away.  A lighthouse must be noticed well before a sailor approaches a distance that would be considered dangerous. That’s why it’s physical attributes can spell the difference between life or death.

Thankfully, here in America, the keepers of the lighthouses that spread across the U.S knew how important these fixtures would be and spared no expense in making sure that they were built to stick out like a sore thumb from miles away.

Cape Lookout Lighthouse stands at 163 feet and spends its watchful days on Harkers Island along the North Carolina coast along a gathering of islands known as the external bank and just one of many lighthouses that are localized to that region.

It flashes every 15 seconds and is visible up to 19 miles and at a minimum of 12. It also happens to be one of the rare few that operates during daylight.

Cape Lookout is attached with its neighbor, Cape Henry Lighthouse, and remains open to the public for visitation throughout the day.

St. Augustine’s original claim to fame came from being the oldest U.S city on record. Now it has the St. Augustine Lighthouse, standing at 165 feet and the 7th tallest in America to flaunt as well! You can find this one at 81 Lighthouse Avenue or on the north end of Anastasia Island in St. Augustine.

Established in 1871 and opened in 1874, the lighthouse built by architect Paul J. Pelz, serves as a private-aid for navigation and remains active today. It was crafted out of brick and became fully automated in 1955.

Rumors of the lighthouse being haunted circulated the internet. Catching wind of the tall tales were the hosts of a reality show called, “Phantom Hunters,” who decided to check it out for themselves. According to whispers from the locals and their own experience, they agreed they heard abnormal sounds and came across mysterious, shadowed figures. 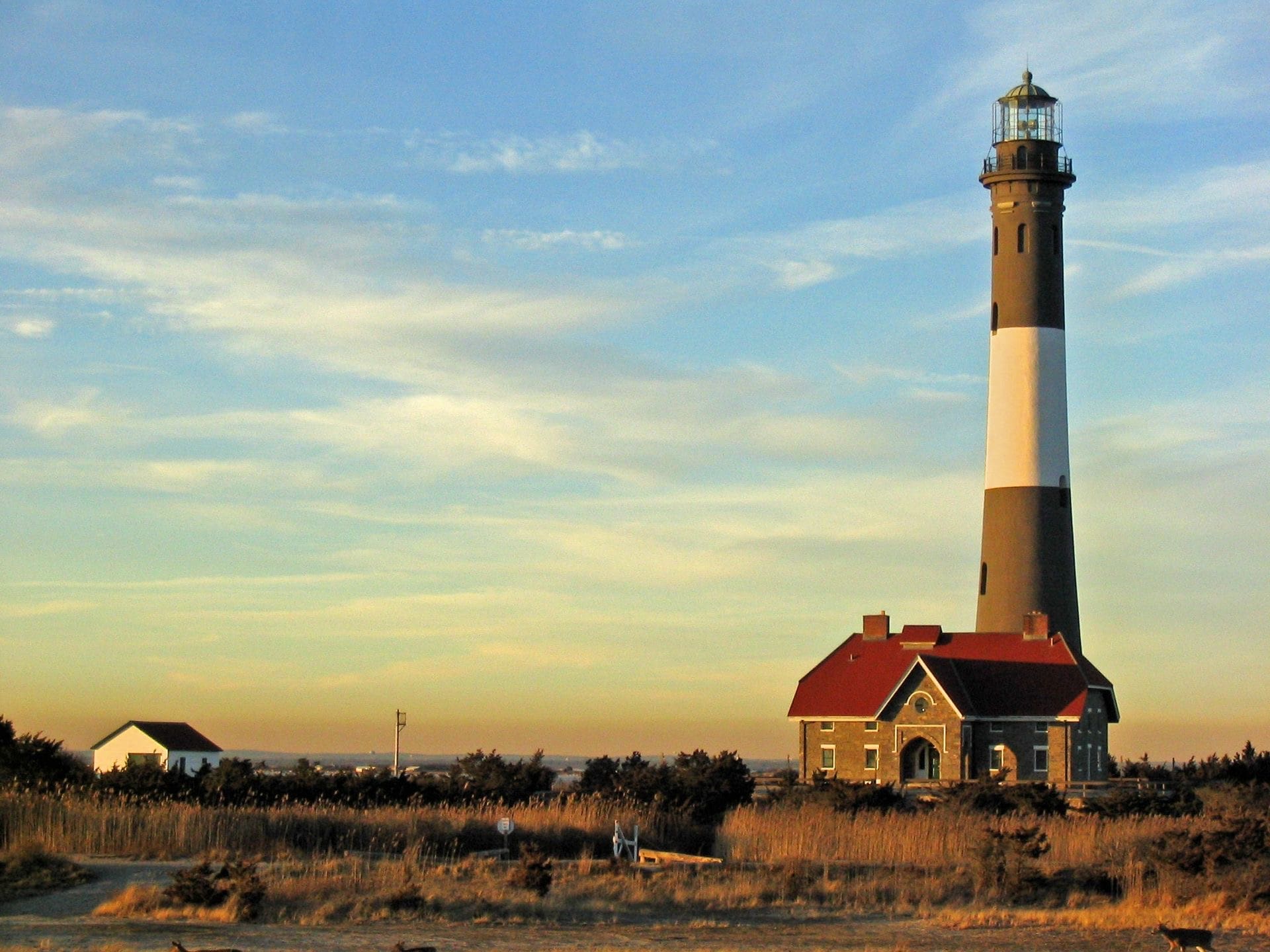 Fire Island Lighthouse stands at 168 feet tall and is planted on the western end of Fire Island along the southern shoreline in Long Island, NY. It’s also a visible landmark in Southern Suffolk County in Great South Bay. In truth, directions may not even be needed since any structure this tall would be hard to miss so long as you’re in the general area!

Opened in 1858 and built with brick and cement, the lighthouse went fully automated in 1986. The architect for this beauty was J.T Morton.

The lighthouse made a cameo in the film, What Happens in Vegas, which starred Cameron Diaz and Ashton Kutcher. In the film, Diaz constantly refers to Fire Island Lighthouse as her favorite place in the world. 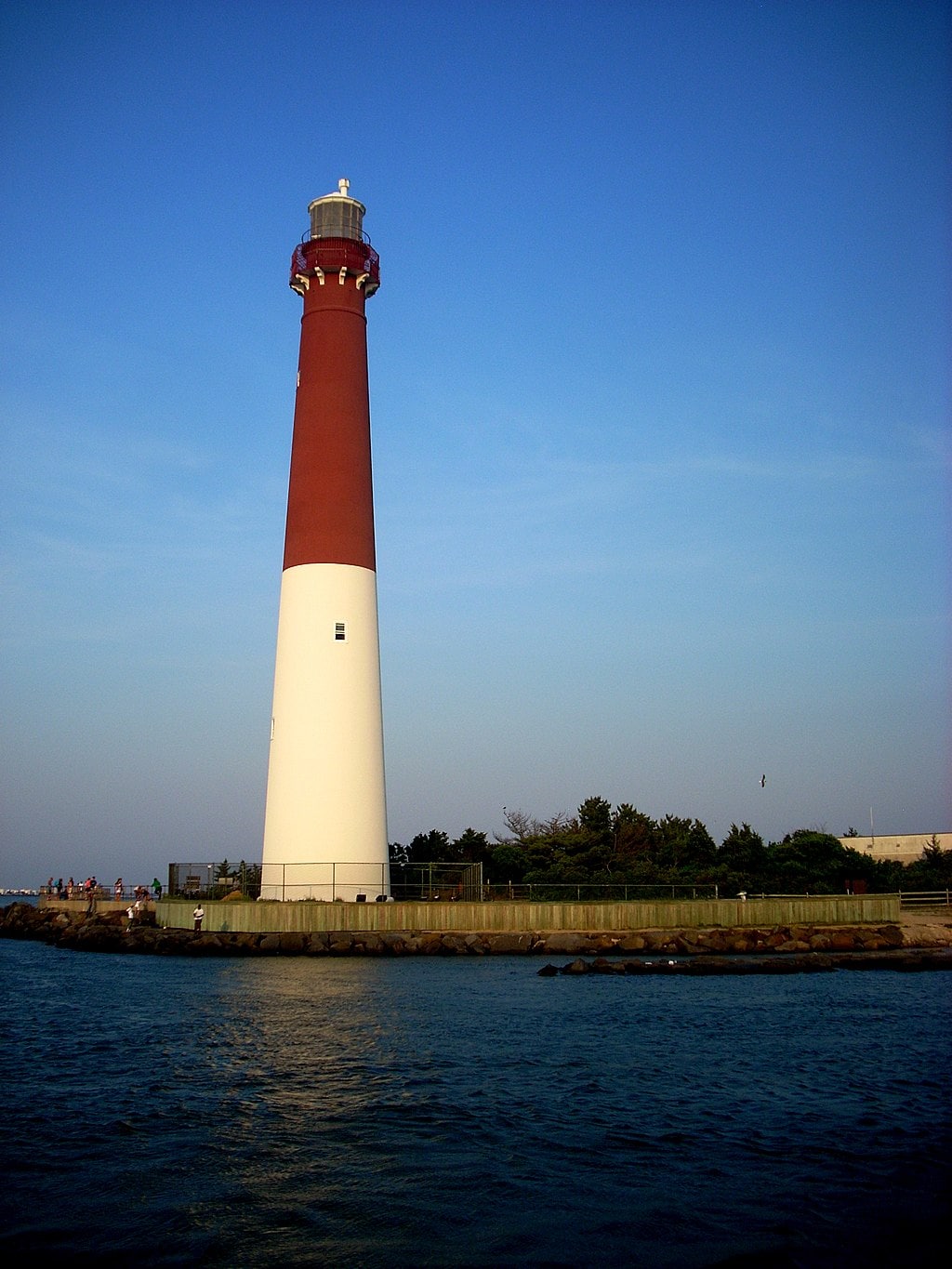 Barnegat Lighthouse stands at 171 feet of pure block and iron. It is active on the northern end of Long Beach Island along the New Jersey Coast. It was built with iron and block because at the time it was established, it was purposed for Lt. George Meade, who would beat Robert E. Lee in the Battle of Gettysburg. He made sure that this structure could withstand the brutality that comes with war.

For just $1, guests can climb the 271 stages and witness some of the most beautiful views the state of New Jersey has to offer.

Because of the location of this lighthouse, it was considered one of the most crucial navigation points for ships heading to and from the New York Harbor. 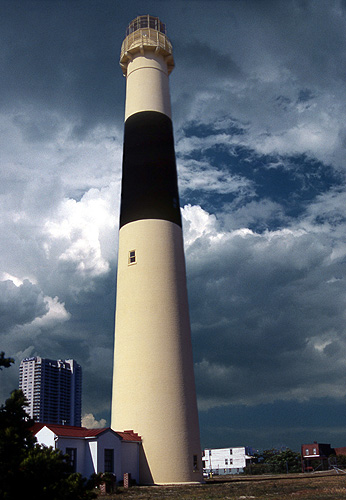 Absecon Lighthouse is tied with number five on this list for the 4th tallest lighthouse in the U.S. It also stands at 171 feet and is made of brick, iron, and granite. Construction began in 1854 but was established in 1857.

The lighthouse was planned by George Meade and considering the materials used to build it, that’s no surprise. Absecon Lighthouse is open to the public, and they are welcome to traverse the 228 stages to the top for more breathtaking views of the Atlantic Ocean. 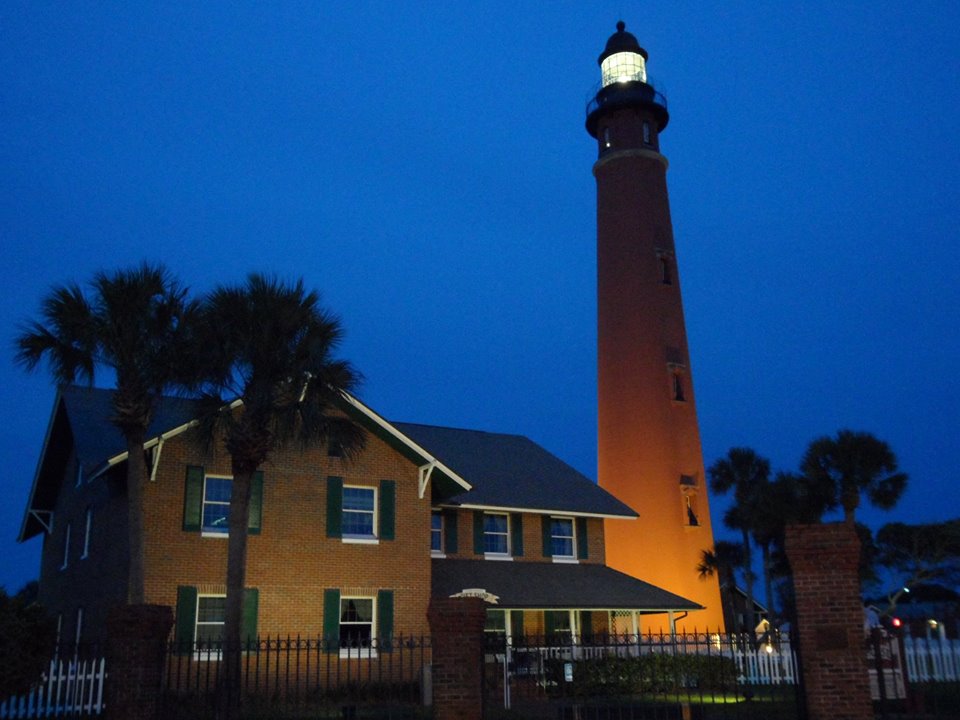 Ponce de Leon Inlet Lighthouse stands at 175 feet of pure block and is the tallest in Florida. It’s located right in between St. Augustine and Cape Canaveral Light – or just 10 miles south of Daytona Beach.

The lighthouse needed to return for active service because newly developed high rise buildings were blocking the Coast Guard’s beacon on the other side of the inlet. It’s now one of 11 lighthouses to earn the distinction of a national landmark. 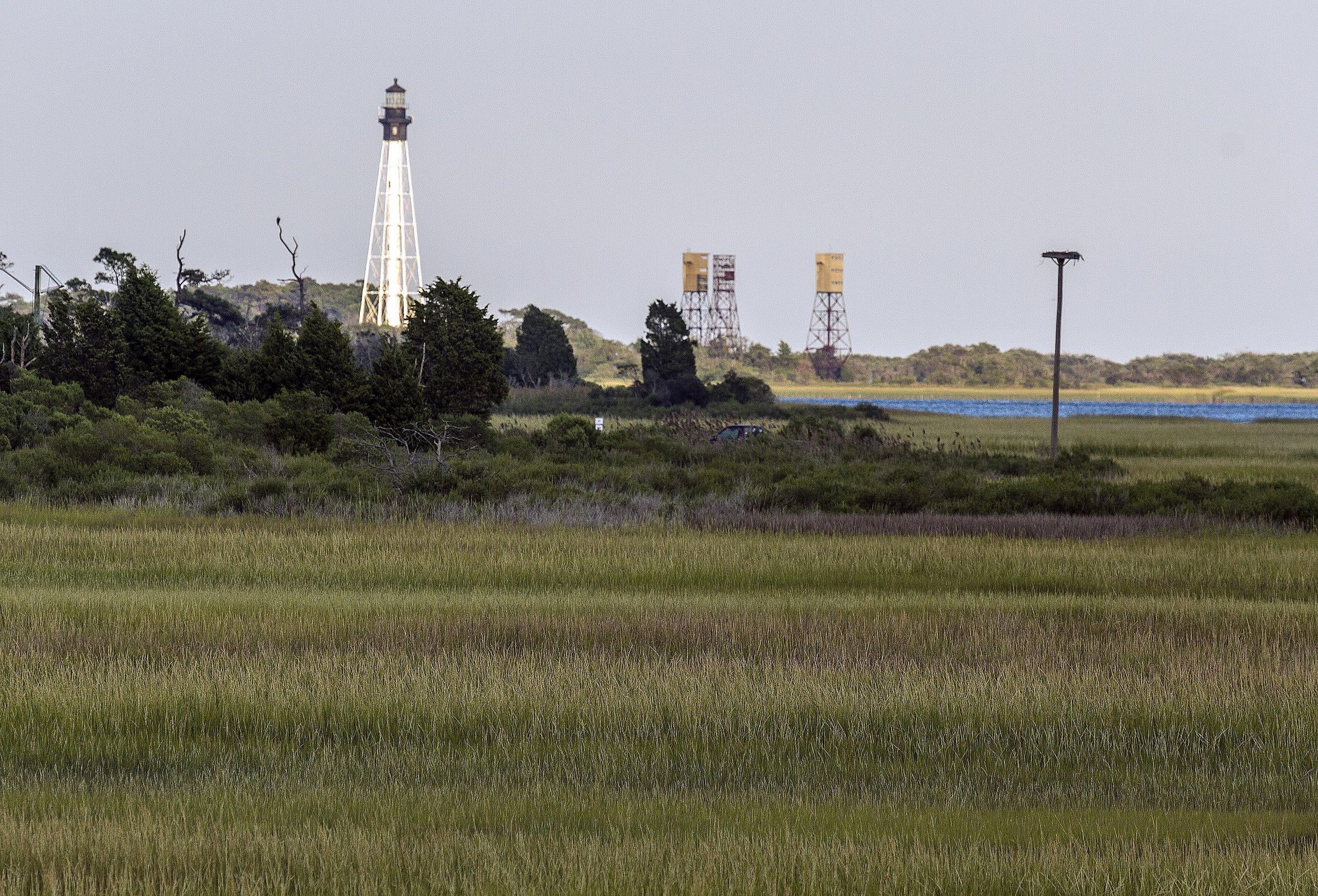 Cape Charles Lighthouse is a 191 foot Goliath on Smith Island located in the northern passage of the Chesapeake Bay in Virginia. Unlike the lighthouses we listed prior, the top of this lighthouse isn’t accessible to the general public. In fact, even visiting the outside of Cape Charles Lighthouse poses a few risks due to rising tides and moving shoals, which make the area surrounding it very damp and hard to navigate.

Opened in 1828, it wasn’t until 1963 that it became fully automated. It’s the tallest lighthouse in Virginia, but it served its last days lighting the sky and retired in 2019. It’s unique to other typical designs because of its octagonal cast-iron skeleton.

The original Fresnel Lens of the lighthouse was replaced by a DCB-224 aerobeacon. If that reads like gibberish, just know it was way more powerful than its predecessor. The original lens for the lighthouse is now on display at the Mariners’ Museum in Newport News, Virginia. 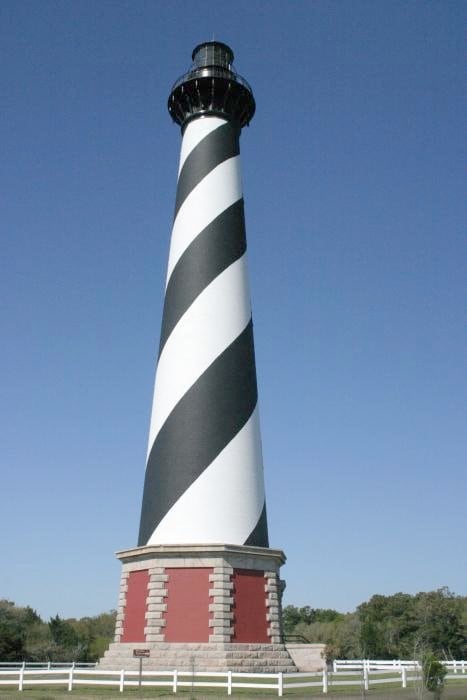 The Cape Hatteras Lighthouse stands at a jaw-dropping 208 feet and is made of block throughout making it the tallest lighthouse in the US. The general public is welcome to come and climb the 268 stages to the top, but good luck without an oxygen tank! If you have the endurance for it, you’ll be welcomed by the phenomenal views of the North Carolina coast.

It’s placed on Hatteras Island in the Outer Banks, which is a gathering of islands on coastal North Carolina.

The Cape Hatteras Lighthouse has a brightness equivalent to two 1000-watt lamps and a flash pattern of 1-second flash with a 6.5-second ellipse. The visibility ranges from 20 nautical miles in clear conditions, but when conditions are perfect you can view the light of this American giant from 51 miles away.