Squids are one of the most feared animals in the world, but have you ever wondered what the largest squid in the world is? Even though they are relatively small, they are still strong and accurate predators. This is why they have been hunted with little success at catching them.

Pirates who sailed the high seas in Nordic legend were said to be terrified of the mysterious creatures that lived in the water, particularly the Kraken. According to legend, a giant monster that resembled a squid was responsible for sinking whole ships and taking their crews with it when it attacked in perilous seas.

Even though the famed Kraken is simply a creation of nautical folklore, there is a school of thought that maintains it was modeled by some very big and very real deep-sea squid.

It is estimated that there are around 300 different species of squid, but there likely are many more that have not yet been identified. These creatures come in an astonishing variety of forms, each of which is distinctive. Keep reading for the largest squid species in the world. 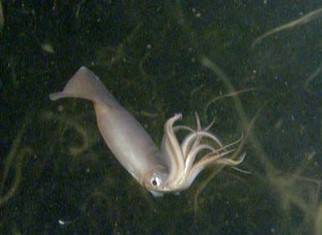 The Humboldt squid can grow up to 110 pounds with a maximum length of up to 7 feet. This squid is found in the eastern Pacific Ocean and is the largest of the flying squid.

They are often found in large shoals of about 1,200 individuals and live at depths between 660 and 12,300 feet. The Scientific Name of this animal is classified as data deficient.

Humboldt squid can swim up to 15 miles per hour and are vicious predators. They feed on other mollusks, small fish, and crustaceans but are also frequent cannibals.  In pursuit of prey, Humboldt squid chase down and attack using their barbed tentacle suckers.

They then tear apart the prey’s flesh with their razor-sharp, parrot-like beak. Each sucker has a ring of sharp teeth, and the squid’s beak can easily tear tough tissue. There have been verified reports of human attacks, primarily on deep-sea divers.

The Humboldt squid also has fascinating chromogenic behavior. This means they can generate light and use it as a tool to produce communicative signals.

They produce red and white light across their entire body that they flicker between at different rates and intensities. It is hypothesized that this is primarily a tool for communicating within the species either for mating purposes or as a warning signal.

The Robust clubhook squid may reach up to 13 feet and weigh up to a staggering 110 pounds throughout its lifetime.

This unique species of hooked squid is only found in the northern Pacific Ocean at depths ranging from 100 to 1,700 feet, and it is the biggest member of its family.

On the other hand, sperm whales, sharks, and fur seals are known to hunt it. It has been determined that there is insufficient information to determine the robust clubhook squid’s conservation status.

The clubhook squid gets its name from the characteristic clubs seen on its tentacles. Each tentacle is equipped with between 15 and 18 club hooks to secure a hold on its prey.

Each arm of the robust clubhook squid may grow as long as the mantle (also known as the “body”) of the squid and has between 50 and 60 suckers on it.

Its arms have fifty to sixty suckers, each of which has the potential to reach roughly the same length as the body of the squid.

The robust clubhook squid consumes several types of benthic fish and jellyfish as food. The sperm whale, the shark, and fur seals are some of its most common adversaries. 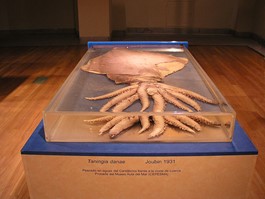 The largest known dana octopus squid was 7.5 feet long and weighed a whopping 350 pounds. They can be found in depths of up to 2,400 feet below sea level in all oceans save the polar seas. The conservation status of this squid is listed as being of the least concern.

These squids are thought to be adept, highly agile, and quite elusive swimmers. However, some animals, like those from sharks’ stomachs, have been documented even though few specimens have been seen in the wild or taken for study.

It has been proven that the dana octopus squid uses bioluminescence for communication and hunting.

Additionally, it has been observed that young squid would charge at possible predators while flashing lights to intimidate and confuse them. The idea that bioluminescence is used for territorial or mating motives has also been put up.

The first underwater footage of a live Dana octopus squid was not captured until 2005 by a team of researchers working off the coast of Japan and led by Tsunemi Kubodera. The members of his crew shot this creature in the pitch-black depths of the ocean, much below the light of the surface. 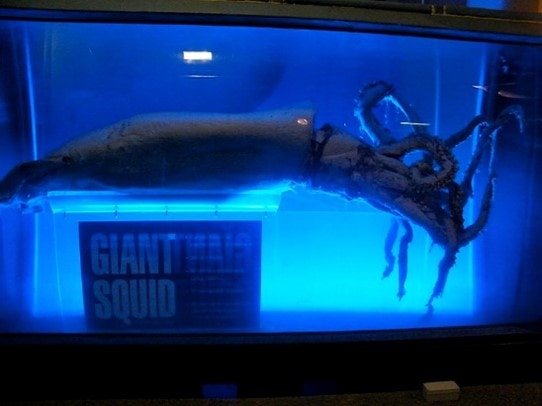 The giant squid is among the largest squid in the world, with a maximum weight of 660 pounds and a maximum length of 39–43 feet. The giant squid is notoriously difficult to examine since they live in the deep ocean, where their depth ranges from 1000 to 3000 feet.

Although specimens are infrequently discovered at tropical or polar latitudes, carcasses have been discovered worldwide, indicating they are present in many of the world’s oceans.

It wasn’t until 2004 that a group of Japanese scientists captured the first images of a live gigantic squid. The giant squid is classified as having a low conservation concern.

Deep-sea fish species, other smaller squid, and possibly even whales make up the food of the giant squid. The enormous squid hunts alone and uses two tentacles with barbed suckers to capture its prey.

Parts of a big squid beak were discovered in the stomach contents of another gigantic squid in Tasmania, providing some evidence that giant squid may engage in cannibalism.

One of the biggest eyes on earth, measuring up to 11 inches in diameter, belongs to giant squid. They can see light in the deepest, darkest areas of the ocean thanks to their huge eyes. The intricate nerve system and brain of the giant squid are of tremendous interest to scientists.

Scientists frequently chase sperm whales toW find gigantic squid because they are the only known predators of these creatures. 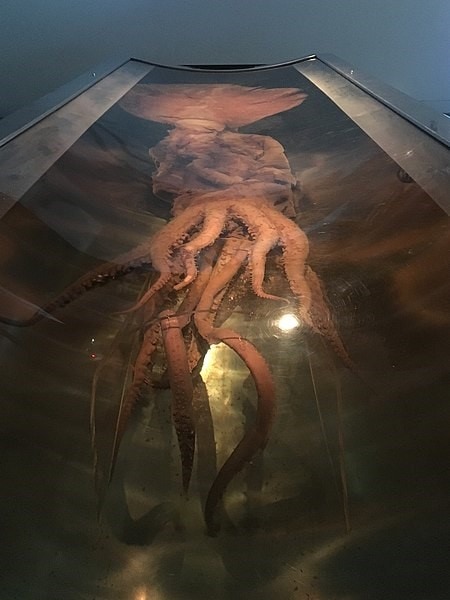 The colossal squid is the largest squid in the world. It is enormous, weighing at least 1,090 pounds and measuring between 30 and 33 feet in length.

Based on a living specimen discovered in 2007, the largest known squid’s weight is 1,090 pounds; however, experts believe they may weigh up to 1,300–1,500 pounds based on beaks found.

Compared to gigantic squids, colossal squids are smaller, heavier, and have eyes with a bigger (12–16 inch) diameter.

It is thought that colossal squid is ambush predators that employ bioluminescence to draw in their prey. Additionally, sperm whales are reported to feast on them extensively.

The giant squid is not considered to be an endangered species; nonetheless, due to the extreme pressure found at the depths of the ocean, gathering information about these massive animals is a challenging endeavor. In addition, it is estimated that their lifespan is just two years.

These squids are thought to live mostly in the Southern Ocean up to a depth of 13,000 feet around Antarctica. There is still a lot to learn about these species since they inhabit at incredible depths.