Snails are among the most diverse groups of invertebrate animals. They inhabit various habitats, from the intertidal zone to the deep sea, and often, during their lifetimes, they either crawl or swim.

This makes them a great tool for studying how Earth’s environments change over time and how species adapt to their changing environment, particularly if they can be compared with other species in the same area or region.

Because there are over 40,000 different kinds of snails in the world today, including snails that live in land and marine and freshwater environments, there would inevitably be a range of looks.

They are also interesting species in nature’s food chain since they absorb toxins and can help prevent soil erosion.

There is a lot more to snails than meets the eye, and they may be found all over the globe in a wide variety of environments, ranging from the most common garden snails to marine snails.

Learn about the 8 largest snail species in the world. 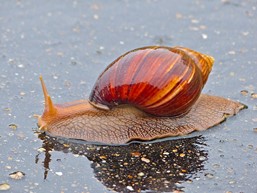 There is a species of snail known as Achatina Immaculata, and while it was first discovered along the coast of East Africa, it has now spread to South Africa as well.

Adults may reach a length of up to 15 centimeters (about 6 inches) in length and are clearly identifiable by the striped pattern on their shells.

Because most adults of the species Achatina Immaculata have a striking pink edge (lip) around their shells, this species is also known as the pink-lipped agate snail. These snails are often kept as pets and thrive best in environments that are hot and humid.

Since the Iron Age, people in Africa have been making use of the Achatina immaculata shell for a variety of various uses. This shell is particularly unique and has significant cultural significance in Africa.

Shells were used by African women to excavate clay for the clay pots they created, and the shells themselves were used to make beads and cups. The Mapungubwe people, who had lived in the area since about 1100 AD, made religious gifts to their gods using shells. 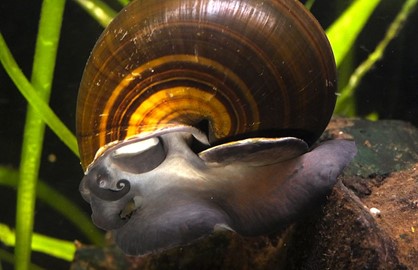 Apple snails are a species of big freshwater snail that typically grow to be around 15 centimeters long. They may be found in a variety of hues, including brown, blue, and yellow, depending on their environment.

They first appeared in South America, but they swiftly colonized other parts of the planet and were a problem wherever they went. They are very unusual because they have a gill and a lung, which allows them to live both in and out of the water.

On the other hand, while they mostly consume dead fish, it has been observed that they will also consume sick or dying fish if they are kept in the same tank with them.

Apple snail eggs, despite their alluring look, are exceedingly hazardous to touch due to the presence of a potent neurotoxin inside them. In addition, apple snail eggs are known to transmit a parasite known as rat lungworm.

Eggs produced by apple snails are often a brilliant pink or red color, and the process of laying them typically takes place on land rather than in water. 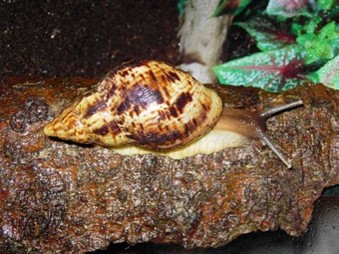 Land snails of the species Lissachatina Reticulata, more popularly known as “Retics,” are big in size and belong to the genus Achatine. Most of these snails may be found in Tanzania and along the southeast coast of Africa, where they enjoy a moist environment with a high degree of humidity.

They have the ability to develop exceptionally fast. It is also capable of reaching a length of around 18 centimeters. They are easily distinguished from other species of snails due to the peculiar texture of its shell, which are ridged and scratched all over its surface.

The shell has a very unique appearance. In addition to special ridges, their shells may be a variety of colors in the form of vertical streaks, including brown, yellow, and orange. 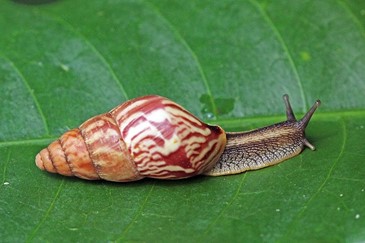 The Giant African Land Snail is one of the biggest snails that can be found anywhere in the globe, just as its name says. Although it is indigenous to East Africa, it may now be found in a great many other areas because of human intervention.

The size of a fully matured Giant African Land Snail is the first characteristic everyone observes about the animal.

The animal may grow to a length of approximately 8 inches, has a height of almost 3 inches, and is readily able to fit into the palm of the hand of an adult male.

Even though the Giant African Land Snail originally developed in tropical climates, it has adapted to flourish in more temperate regions. It may even hibernate or estivate during the months that are either cooler or drier. 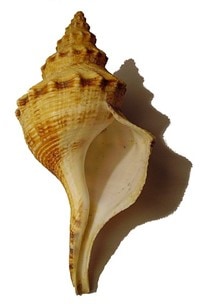 Sea snails make up the majority of those at the top of the list, and following them is the giant whelk, another kind of sea snail that can reach a shell length of around 26 centimeters.

Their shells are often a fawn or orange-brown hue, and the surface of their shells is covered with a large number of characteristic whorls and bands.

The enormous whelk is a kind of snail that lives in the oceans around Australia and Tasmania. It feeds on crustaceans, worms, and other types of snails. 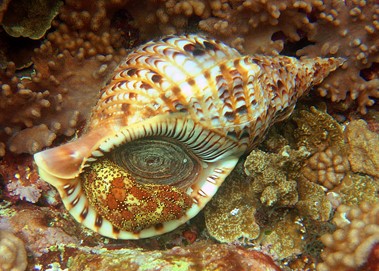 The Giant Triton is a kind of sea snail that is very huge and has the potential to reach a length of around 50 centimeters. Because the shell may be used to generate a sound similar to that of a trumpet, it is often referred to as Triton’s trumpet.

Since they are a natural predator of the very poisonous Crown-of-Thorn starfish that feed on coral reefs, they are a regular sight in the waters around the Indo-Pacific region. This makes them an extremely valuable component of the overall health of coral reefs.

In addition to dining on starfish, the big Triton also consumes various types of snails. It hunts by pursuing its target and then immobilizes it with its saliva when it has caught it. Most of the time, their shells are either white or yellow-brown tint, and they have the form of a spindle. 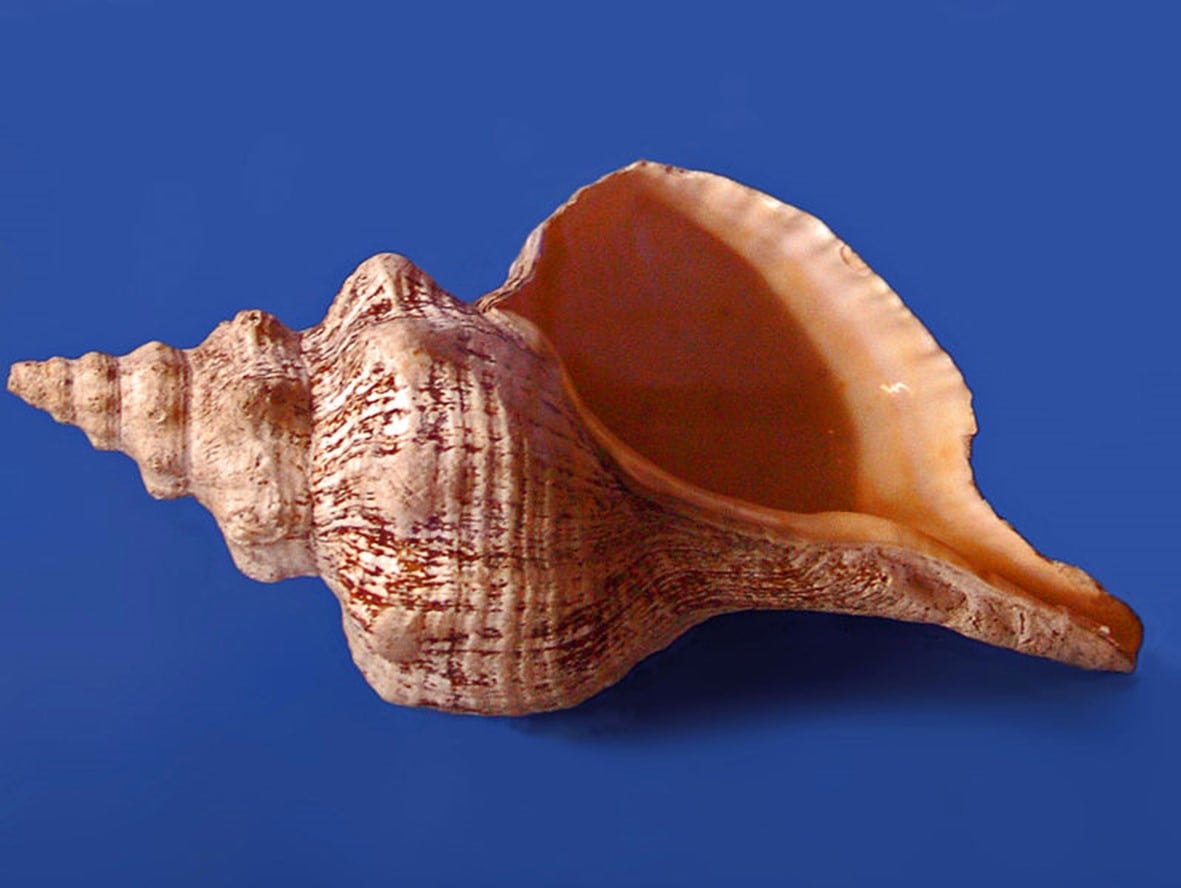 The dangerous Horse Conch, which lives in the ocean seas near Florida, may reach up to 24 inches. The shell is prized by collectors due to its enormous size; it is the biggest gastropod to be found in the seas of the United States.

It consumes various species of snails in addition to hermit crabs and likes to make its home on the sandy and muddy flats that are found in relatively shallow water along the coast.

The Yucatan Peninsula in Mexico is home to a large population of horse conchs, which may be found in seas as far north as North Carolina.

The surface of its shell often contains a great number of whorls, and while the snail is young, it has a characteristic orange hue that gradually becomes less noticeable as it ages. 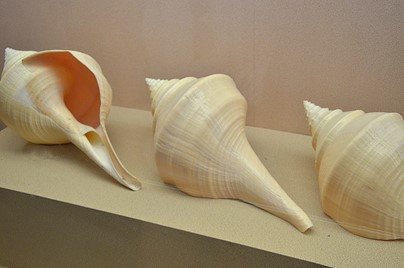 The Australian Trumpet is a massive sea creature that is the largest snail species in the world.  It may be found in the seas surrounding its native Northern Australia, as well as in Eastern Indonesia and Papua New Guinea.

These monstrous creatures have the potential to reach a length of 91 centimeters and a weight of around 18 kilograms. Due to its enormous size, the Australian Trumpet is the biggest snail species found anywhere globally.

Their typical diet consists of marine worms, but other than that, very little is known about them. Despite this, they are often sought for both their amazing shells and their meat.

The shells that come from Australian trumpets are very rare and sought after by collectors because of their one-of-a-kind appearance.

Their shells are often a light tint, occasionally a pale yellow, and have a peculiar form in which they are narrower at one end than they are at the other.