Sea turtles are amazing and majestic creatures that mostly roam the open ocean. There are a lot of sea turtles species out there, but most of them are listed as endangered. Real estate development on coastlines and illegal hunting are the two primary reasons why sea turtle populations worldwide are facing a decline.

There’s still a lot we’ve yet to know about sea turtles but what we do know is that some species are able to reach sizes even larger than us. If you’re a fan of these sea swimmers, then you might want to check out exactly how large sea turtles can be.

Even if you can’t get close to them, you can still have an idea of what it’s like to size up next time. 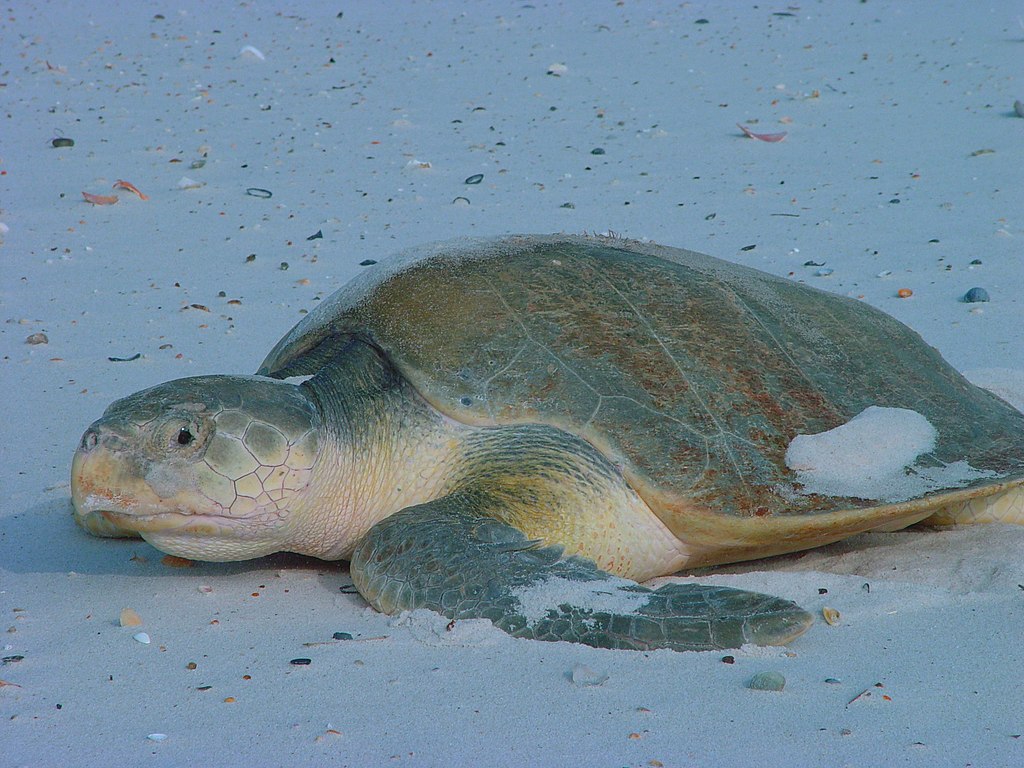 The Kemp’s Ridley is the smallest of all the sea turtle species out there. The shell of the Kemp’s Ridley starts out as dark purple when they’re still hatchlings. However, they turn into a yellow-green, white plastron, or grey-green carapace once they reach maturity.

What makes the Kemp’s Ridley unique is that they are the only species of sea turtle that hatches during the day. Like other sea turtles, however, they still go to beaches where they bury their eggs in the sand. Like the other sea turtles, the Kemp Ridley population declined because of illegal poaching and egg hunting.

However, they’re now endangered because of habitat loss, pollution, and accidental fishing.

The Kemp’s Ridley is named after Richard M. Kemp, the fisherman who submitted the first specimen of the specie in 1906. 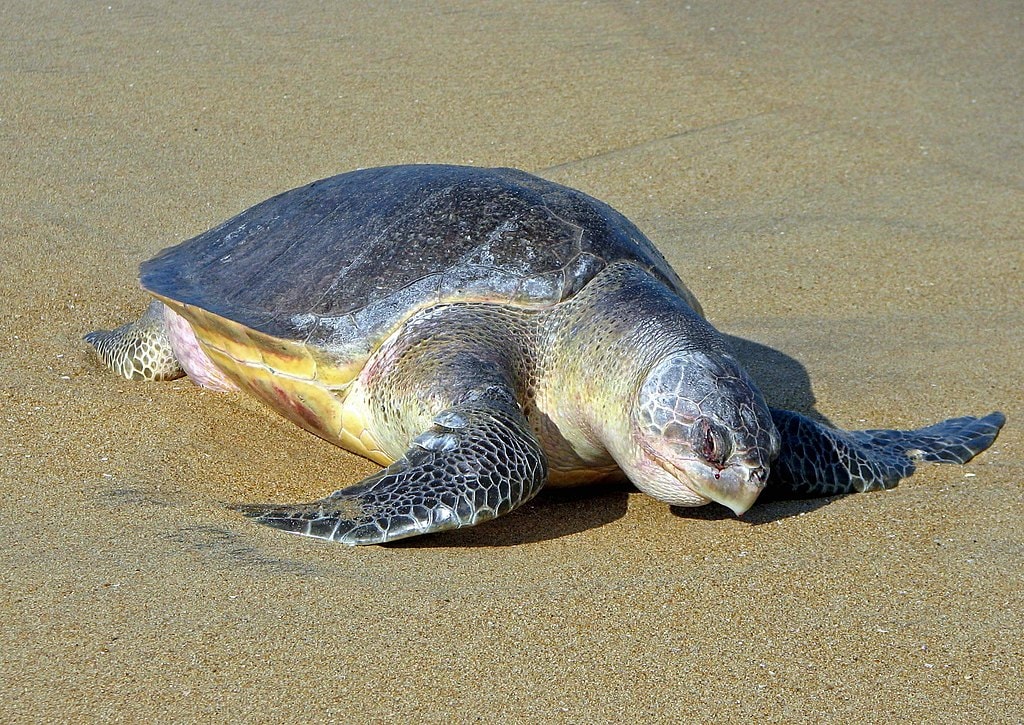 The Olive Ridley is also called the Kemp’s Ridley Turtle. They may not be the largest or the smallest of the sea turtle species, but they are the ones that are most abundant around the world. Their name comes from the olive hue on their body. When it comes to male and female biology, females are distinguished for having a more rounded body.

The Olive Ridley is also known for their synchronized mass nestings. These are called arribadas. While most sea turtles prefer hatching eggs on their own, the Olive Ridley gathers by the thousands on the same beach to lay their eggs. There’s no explanation as to why Olive Ridley turtles do this.

This is another trait that sets the Olive Ridley apart from the Kemp Ridley. 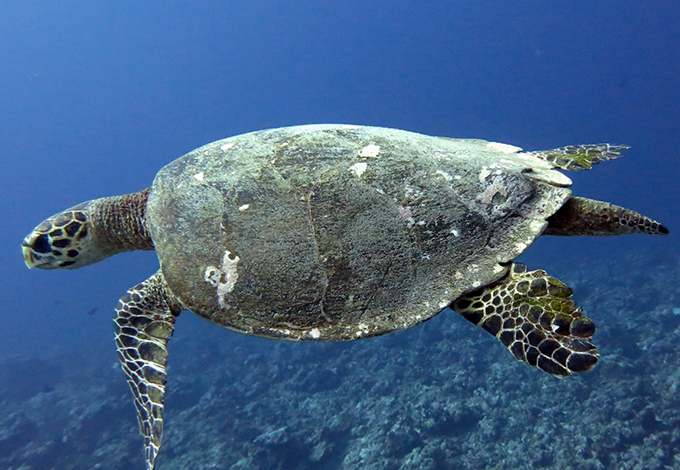 What’s unique about the Hawksbill Sea Turtle is that their shells will slightly change color depending on the water temperature. This species spends most of its life in the open ocean. However, it’s also seen to spend time in shallow lagoons and coral reefs as well. They’re listed as critically endangered. The species was prized for its shell, which was used for decorative purposes.

Female Hawksbill Sea Turtles return to their hatching place when it’s their time to hatch eggs. This is why real estate development on coastlines results in a decline in their population. 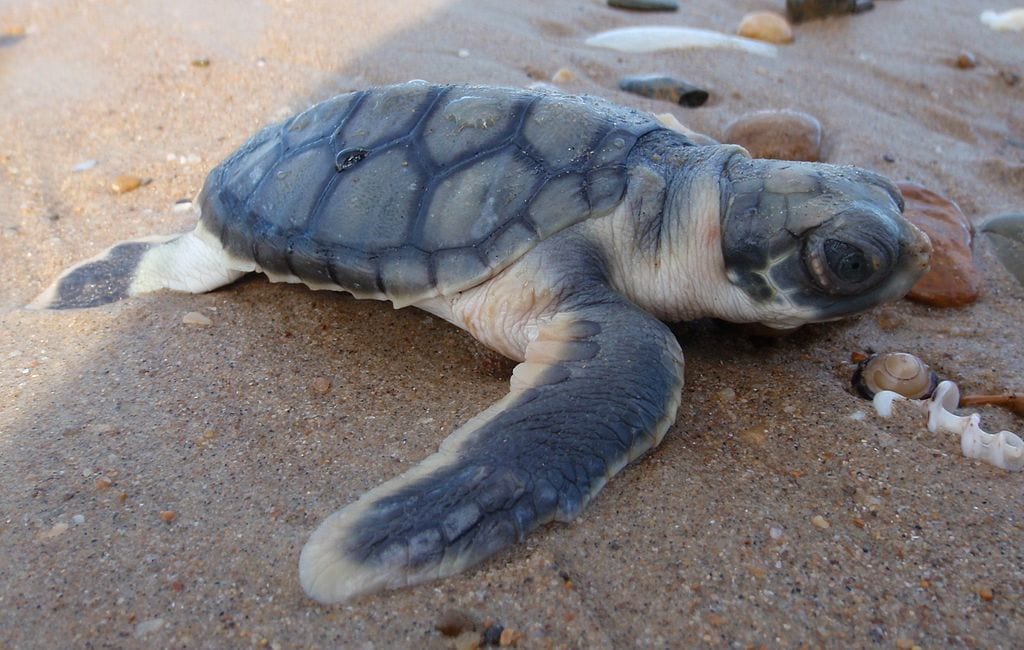 What makes the Flatback Sea Turtle different is that it features a smooth flat-domed shell. Other sea turtles have convex shells. The females of this specie are larger than males when they reach adulthood. It’s also found that females have longer tails as compared to their counterparts.

The flatback turtle is listed as “data deficient.” What this means is that there isn’t enough scientific information to determine whether the population is in danger of going extinct. It was listed as vulnerable in 1994, but due to its limited habitat, its population was able to stay a lot safer compared to other species.

Although Flatback Sea Turtles hatch the same way as other sea turtles, their hatchlings are bigger compared to other species. 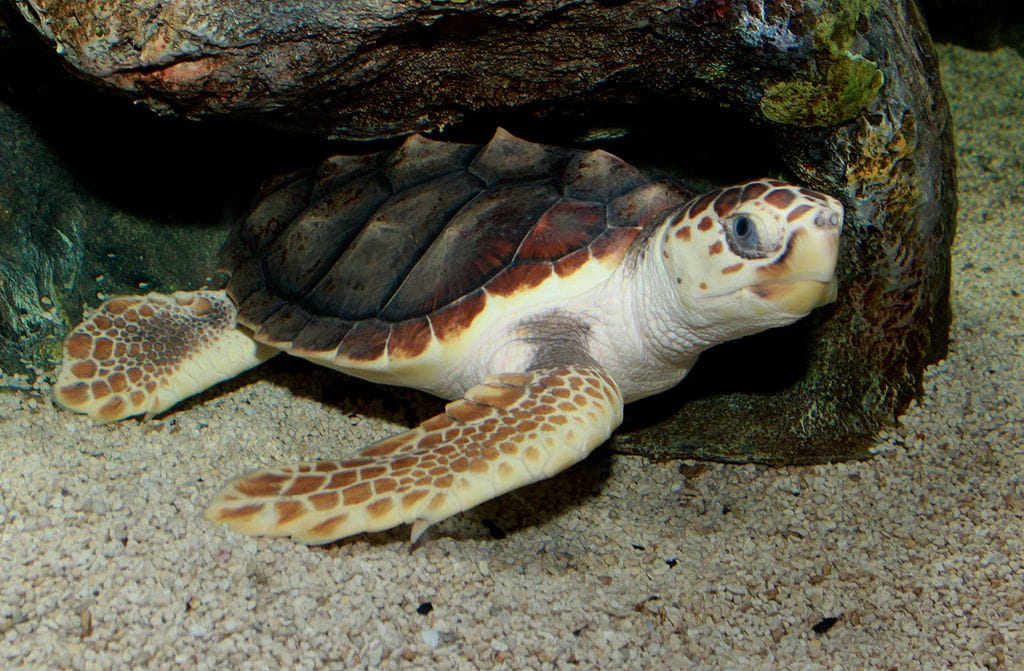 Loggerhead Sea Turtles get their name from their large head. This isn’t just a simple trait, though. Their large heads are able to support powerful jaw muscles, which allow them to eat hard-shelled prey like clams and sea urchins. Their bite isn’t as strong as a Snapping Turtle’s, but they’re still pretty formidable for hunting.

Aside from small sea creatures, Loggerheads also eat seaweed and other marine plants.

Due to their hard shells, Loggerheads aren’t as in danger of being hunted as compared to other sea turtles. However, Loggerheads still get accidentally caught in fishing gear from time to time. Loggerheads, like other turtles, are essential to maintain the health of coral reefs and seagrass beds.

The Loggerhead has been around for nearly 110 years, making it one of the oldest species of sea turtles out there. 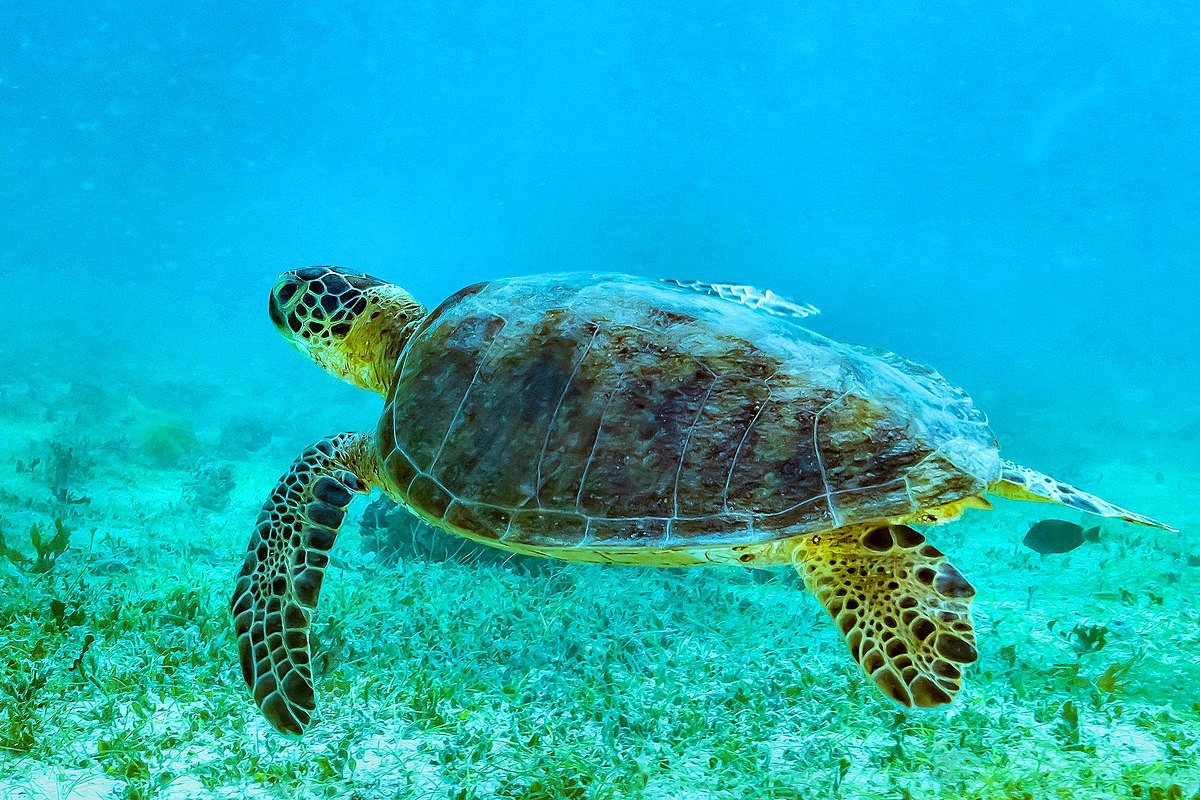 Despite the name, the majority of the green turtle’s shell and body is colored either olive or black. The belly of the turtle is green, though, and this is where it gets its name from. Green Sea Turtles love to migrate long distances, where females will land on beaches to hatch their eggs.

Despite being active in reproduction, Green Sea Turtles are listed as endangered. They’re protected from being exploited by many countries in which the turtles migrate in. Many Green Sea Turtles die because of farming and being accidentally caught in fish nets.

However, the increasing number of real estate development on beaches also result in the loss of habitat of these turtles.

Many islands worldwide are called Turtle Islands because many Green Sea Turtles migrate to their shores to lay eggs. Hatchlings that survive and make it to the land can live as long as 90 years. 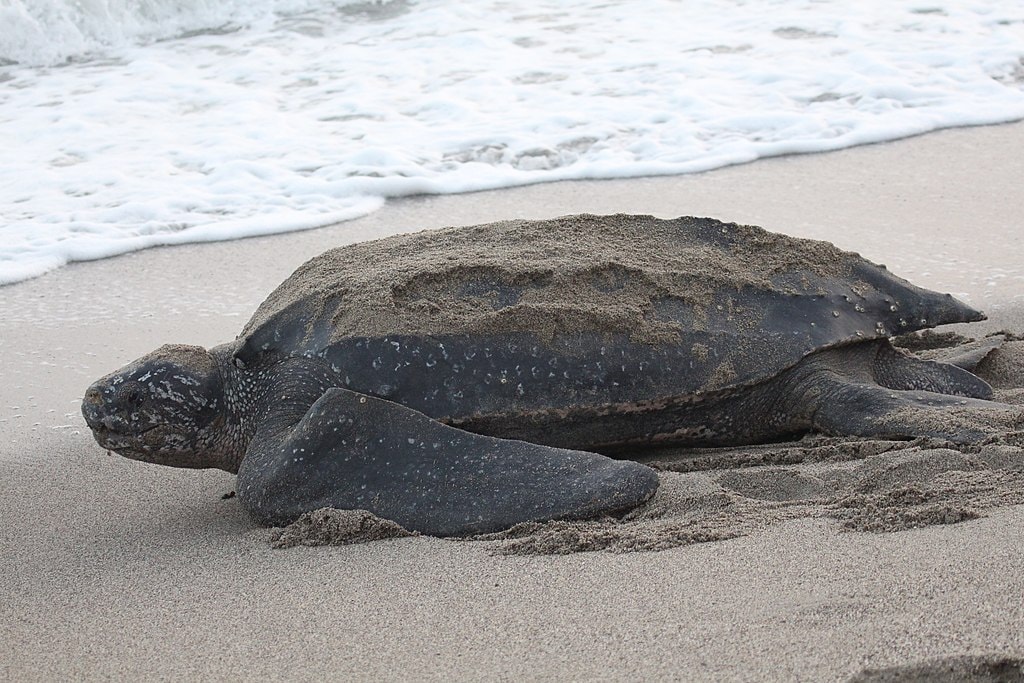 The Leatherback Sea Turtle is the largest sea turtle right now. You’ll know why in our next entry. This sea turtle is very easy to distinguish. While almost all turtle species have a bony outer shell, the leatherback instead is covered by oily flesh and flexible, leather-like skin, which is where it gets its name.

Leatherback turtles love to feed on jellyfish, and this is a good thing as this help keep the population of the invasive species in check. They also love exploring the open ocean to feed on other soft-bodied creatures like cephalopods. They’re also known to feed on small fishes, sea urchins, and crustaceans.

Sadly, the Leatherback is the most endangered turtle species for now. There are efforts to maintain their population and potentially increase the Leatherbacks’ numbers.

Due to their teardrop-shaped body, Leatherbacks are very hydrodynamic, which means they move easily in water. 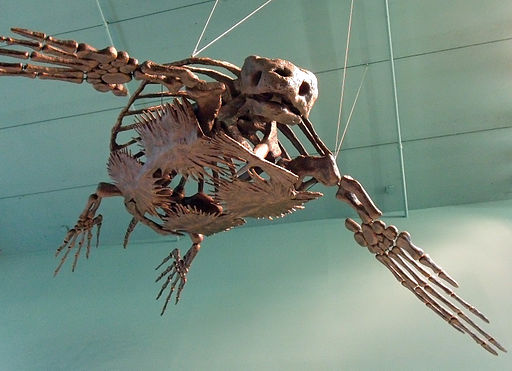 The Archelon is a marine turtle that was around during the Late Cretaceous, and it walked and lived among the largest dinosaurs. According to experts, the closest relative of the Archelon is the Leatherback Sea Turtle, so it’s not surprising that it’s such a large turtle.

So far, five fossils of the Archelon have been discovered, but these were more than enough to help us peer into the life of this large and majestic creature.

The largest Archelon specimen ever discovered sizes up at 15 feet from head to tail.