What should you do if you look up and find a wasp coming at you? It is not difficult to see why the first reaction of the majority of individuals is to run away, yelling.

They can inflict a painful sting and some pack so much venom into their bodies that just a few stings are enough to kill a human.

Wasps, on the other hand, contribute significantly to the health of the environment. They also contribute to controlling common pests and other exotic species, in addition to their role as pollinators of flowers and trees. There is more to them than meets the eye, even though they could give off a creepy vibe.

But what kind of wasp has the largest members in its species? It is vital to measure the length of the wasp from its head to its stinger to identify which wasps are the most impressive. The 10 largest wasps in the world are listed below for your perusal. 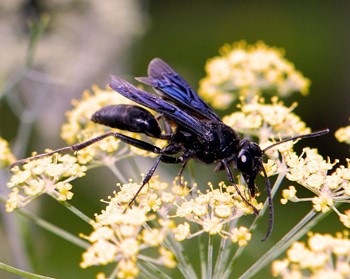 The giant black wasp, or Sphex pensylvanicus, is a large species of the Sphex, giving it its common name. Although most range between 0.8 and 1.4 inches on average, it may reach a maximum length of 1.5 inches.

Wasps are similar to other insects in that the females are generally bigger than the males. Their wings have a bluish-purple appearance, in contrast to their pitch-black bodies. Although their sting may cause quite a bit of agony, they do not represent much danger to people.

The IUCN has not yet recognized the huge black wasp as a species deserving of particular protection. 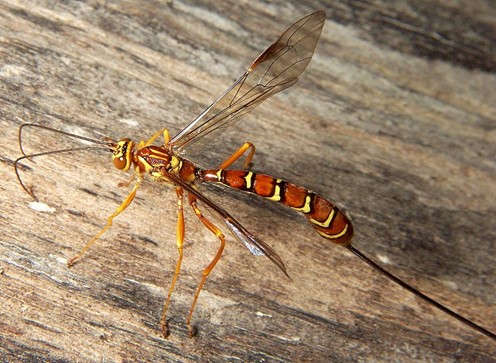 One of the biggest species in the family Ichneumonidae is the long-tailed giant ichneumonoid wasp, scientifically known as Megarhyssa macrurus. The ovipositor of females may reach 4 inches, while the females themselves can grow to a maximum length of 2 inches.

In the eastern portion of the United States, you may find long-tailed gigantic ichneumonoid wasps. Their ovipositor, used by females to lay their eggs, is the trait that sets them apart from other species the most. 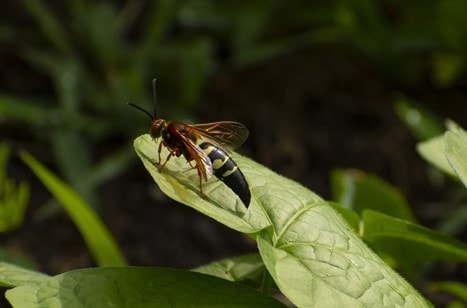 The lengths of individual specimens may range anywhere from 0.6 to 2.0 inches. Their brown wings contrast with the brownish hair that covers their thoraces, which are striped black and red.

Despite having a name and looks that strike dread into people’s hearts, these creatures do not represent a danger to people. 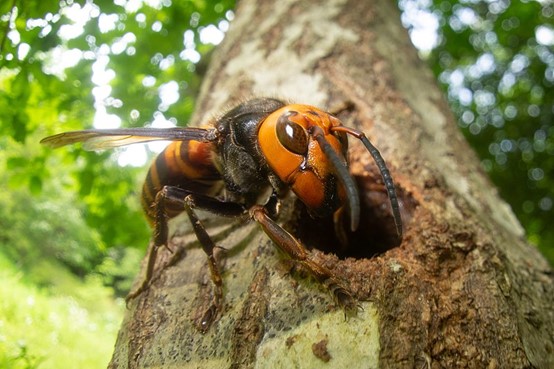 The Asian Giant Hornet is the biggest hornet that can be found anywhere globally. It is also known as the Japanese giant hornet. Their maximum length is around 2.2 inches, and their wing spread is more than 3 inches.

They are known for their ominous moniker of “murder hornet.” This is because their sting contains a poison that can end a person’s life if administered in sufficient quantity.

The gigantic Asian hornet may be found in the far east of Russia in addition to its natural range in East and Southeast Asia. Despite this, there have been reported sightings of it in North America in recent years, which suggests that its area is growing.

The IUCN classifies the gigantic Asian hornet as a Threatened species owing to the destruction of its natural habitat by human activities such as deforestation. 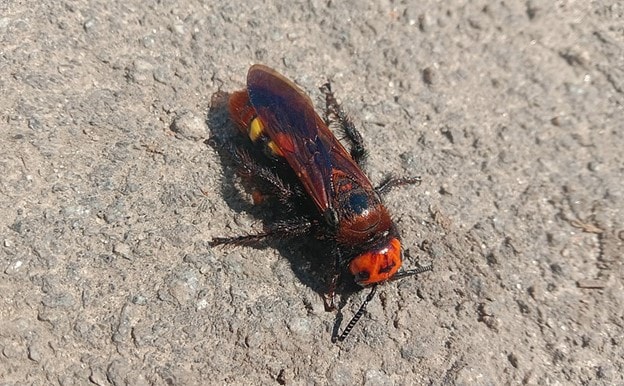 The Megascolia maculata, sometimes known as the mammoth wasp, is the biggest species in Europe. Females may grow to be up to 2.4 inches long, but males are often significantly shorter than their female counterparts.

Their shiny black hair, which covers their yellow and black striped bodies, gives them the appearance of a bumblebee that has been stretched out. There are populations of mammoth wasps throughout the southern regions of Europe and Russia, as well as in North Africa.

It is mostly home to ecosystems typical of the Mediterranean region, such as oak woodlands and thick shrublands. Additionally, you may usually see them near sawmills and compost piles, which attract the animals they eat.

Adults feed on the nectar of flowers, while females deposit their eggs on the larvae of the European Rhinocerous beetle, the only known host for this beetle species. 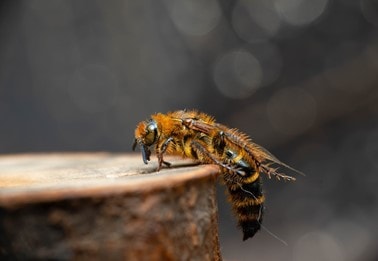 One of the biggest wasps in the world is called the Giant Scoliid Wasp, and its scientific name is Megascolia procer. They are a solitary species belonging to the family Scoliidae and may grow up to 6.5 centimeters (2.5 inches) long.

In addition, the length of their wing spread may be up to 4.5 inches at its maximum. Most of their bodies have a dark appearance, with yellow and orange patterns on them.

The islands of Java and Sumatra in Indonesia are where you’ll most likely find the Giant Scoliid Wasp. Females hunt the Atlas beetle, which they then kill, render helpless, and buried alive in a burrow beneath.

In the adult beetle, the fertilized egg of the female germinates until it hatches, at which point the newly hatched larva begins to eat its still-living host. 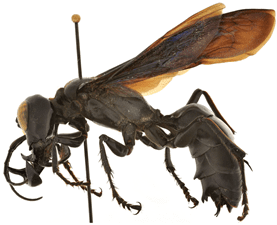 After its discovery in 2011, the Dalara Garuda wasp was given the nickname “King of Wasps” since it is one of the biggest wasps in the world. There are no living specimens that have been discovered, however, the length of some of the remnants found is up to 6.5 centimeters.

In contrast to the majority of wasp species, the males of this species seem substantially bigger than the females. Their huge bodies are jet black, and the males have long jaws that give the impression of being quite strong. It’s possible that the jaws are used for self-defense or to restrain females as they mate, but either way, they serve a function.

Garuda, the mythological creature that is part human and part eagle and is the national emblem of Indonesia, is where the name comes from for this animal. Because they are a member of the family of digger wasps, it is possible that the females would attack other insects to force them to serve as a host for their eggs.

The island of Sulawesi in Indonesia is the only place where the Dalara Garuda is known to make its home at this time. 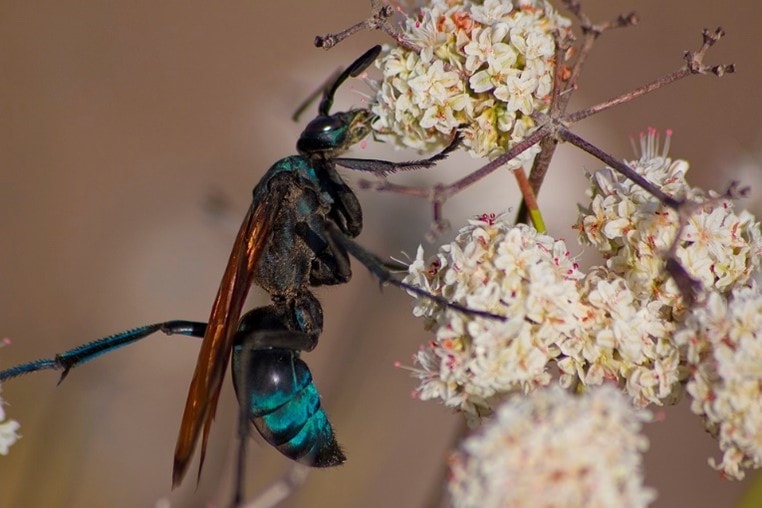 The tarantula hawk wasp is the largest wasp in the world. These wasps belong to the genus of spider wasps, and their only purpose in life is to hunt tarantulas.

Although the length of several species may regularly reach up to 2 inches, the Pulszkyi’s tarantula hawk (Pepsis pulszky) is the longest of any of them.

When fully grown, they can reach a maximum length of 2.7 inches and have a wing span of 4.5 inches. The majority of the time, they have a blue-black body with wings that are a rusty tint. Even though they don’t assault people very often, their stings are among the most excruciating of any insect.

The discomfort caused by their sting only lasts for approximately five minutes, which is a blessing. Because of their huge stinger, very few animals choose to feed on tarantula hawks; nevertheless, the roadrunner is one remarkable exception to this rule.

Tarantula hawks range across many continents, including India, Southeast Asia, Africa, Europe, Australia, and the Americas. Adult males and females consume flowers as their primary food source, but only the females actively seek spiders for food.

Before depositing an egg inside their living host, they temporarily utilize their stinger to immobilize the tarantulas they encounter. The Tarantula Hawk is now classified as a species of Least Concern by the International Union for Conservation of Nature (IUCN).