As far as our pets go, there is never a one-size-fits-all. We often adopt that which reflects our personalities, our desires, and our lifestyles. Thankfully, when it comes to man and woman’s best friend, you can feel free to take your pick of the litter and get exactly what you were looking for. From big to small or something in between, your perfect match is out there.

If you fancy yourself as more of an outdoorsy adventurer in the mountains, a border collie or a German shepherd could be perfect for you. If you’re a homebody that likes to stay in on a rainy day and catch the latest show on Netflix, there’s a little Shih Tzu that’s waiting to meet you.

Today, however, we’re going to be taking a look at the dogs that come a little more rough and tumble and those usually end up being on the larger end of the canine spectrum. 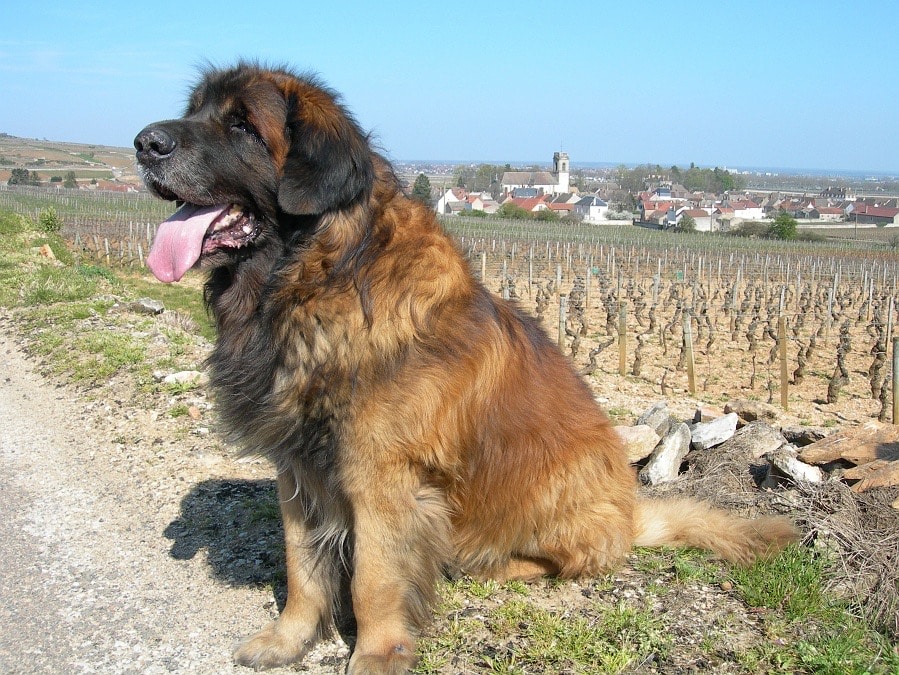 The Leonberger is as German as the name suggests. This beautiful gentle giant that stands at 31 inches gets its name from the German city, Leonberg. This dog was bred specifically to assist in water-related accidents and rescues. With that thick, golden, double coat, excellent at wicking away moisture quickly, it’s easy to see how they’d do well in those conditions.

Don’t let its size intimidate you. This breed is as gentle and fun-loving as they come. Their mild disposition makes them excellent family dogs. Most importantly, they’re adaptable to changing circumstances evidenced by their different roles over the years from water rescue to watchdogs.

World War 1 almost brought an end to this beloved beast. In order to save them, two breeders, Karl Stadelmann and Otto Josenhans collected the remaining 25. Of those 25, just five could breed. It managed to be enough and the bloodline was brought back to baseline by 1926 with 360 Leonbergers. 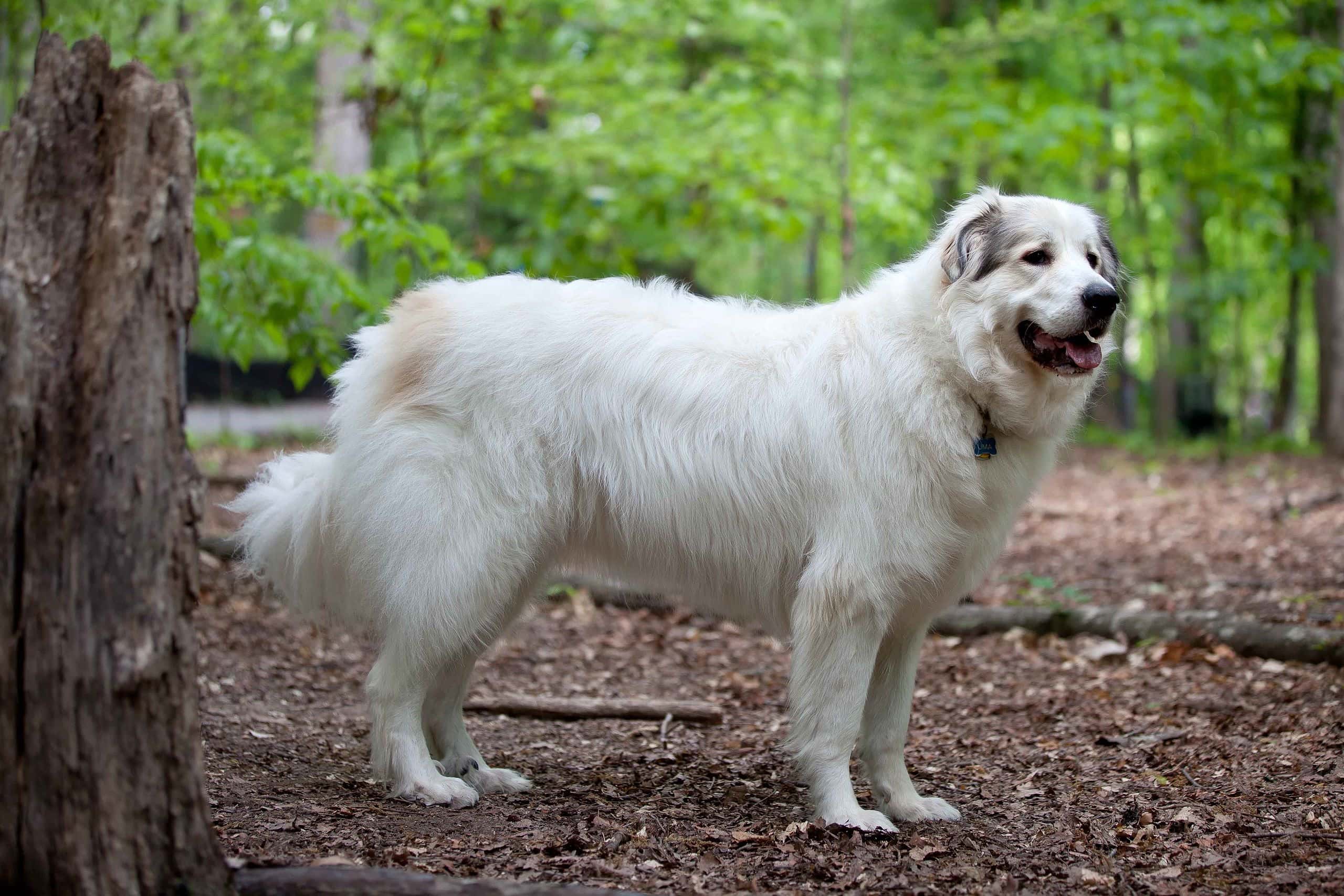 This majestic dog enveloped in a white coat is also known as the Pyrenean Mountain Dog. Standing at 32 inches and bred as a watchdog, these cuties come from the French end of the Pyrenees Mountains. Underneath that large coat, they carry some pretty thick muscles which lend themselves well to their roles as guard dogs. Their protective instincts are off the charts

Those protective instincts can sometimes get them into trouble. It’s important that if you choose to own one, you train them early and establish the family hierarchy as they’ll surely challenge it if they sense weakness!

Originally the companion of peasant farmers for thousands of years, French royalty realized the importance and grace of the Pyrenees and were declared the Royal Dog of France in 1675 by King Louis XIV’s royal court. 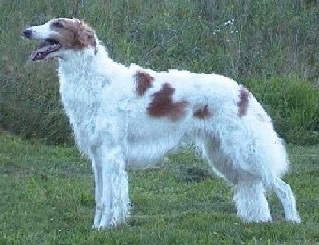 The Borzoi is also known as the Russian Wolfhound. These dogs were built with the need for speed. With a silk, wavy coat, they look damn good doing it! In fact, Borzois literally translates to “fast wavy-haired dog.” They stand at 33 inches.

If you can keep up with its physical demands and if you love to run, this one would make an amazing family dog with its mild-mannered temper and innate respect for its owners.

They were originally bred to hunt running game like rabbits and foxes. They come from noble heritage and were part of the Russian aristocracy. 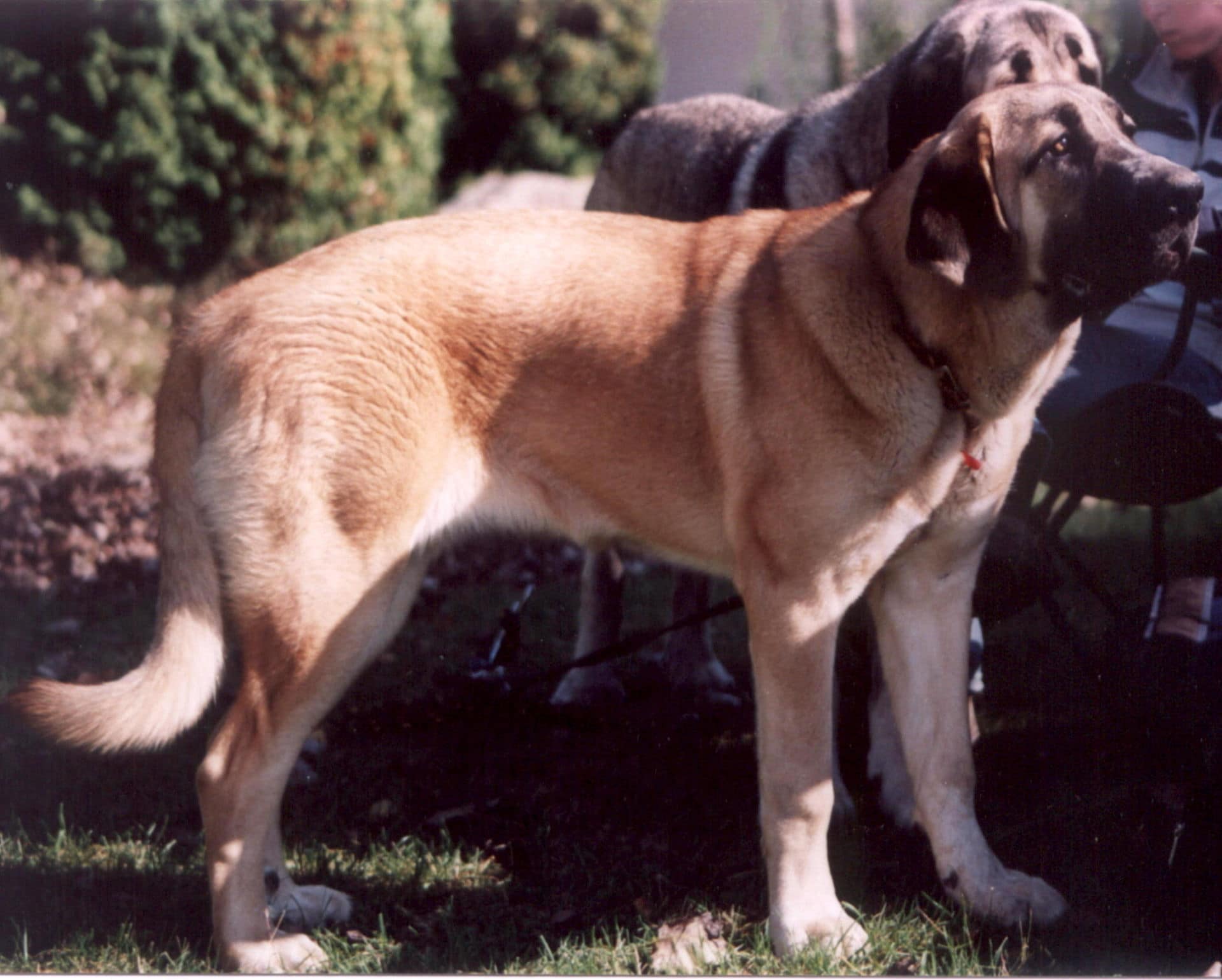 The Spanish Mastiff is deservedly recognized as Spain’s National Dog. Standing at a max height of 33 inches with a scary yet cute face, this breed is generally wary of strangers and it takes a bit of work to gain their trust. Once you do, they will remain loyal forever.

Their coats range through an interesting color-wheel. They’re commonly a shade of fawn but can also appear red, black, or a pattern of all the above. A good choice for any redheads out there that might be looking for a companion that can relate!

They were originally bred to be a livestock guardian. A superhero of sorts, fighting for a noble cause, fending off wolves and other predators from their owner’s chickens and sheep. 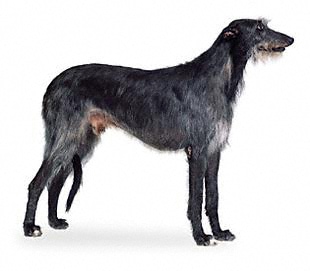 The Scottish Deerhound hails from Scotland and stands at a maximum height of 35 inches. Originally bred to hunt red deer, their sight and agility made them excellent companions for hunting enthusiasts. Unfortunately, or fortunately, depending on how you look at it, the Deerhound was put out of business thanks to the invention of the 19th- century rifle.

They are content, well-mannered, and eager to please their owners. Of course, this makes them excellent companions in life. This seems to be a common thread with dogs in general.

In spite of their frame that suggests they’d be up and running 24/7 and very physically demanding like some other hunting dogs, Scottish Deerhounds are quite lazy. The only way to get them on their feet is if they have a target to chase. And for these guys, it better be a little better than a tennis ball! 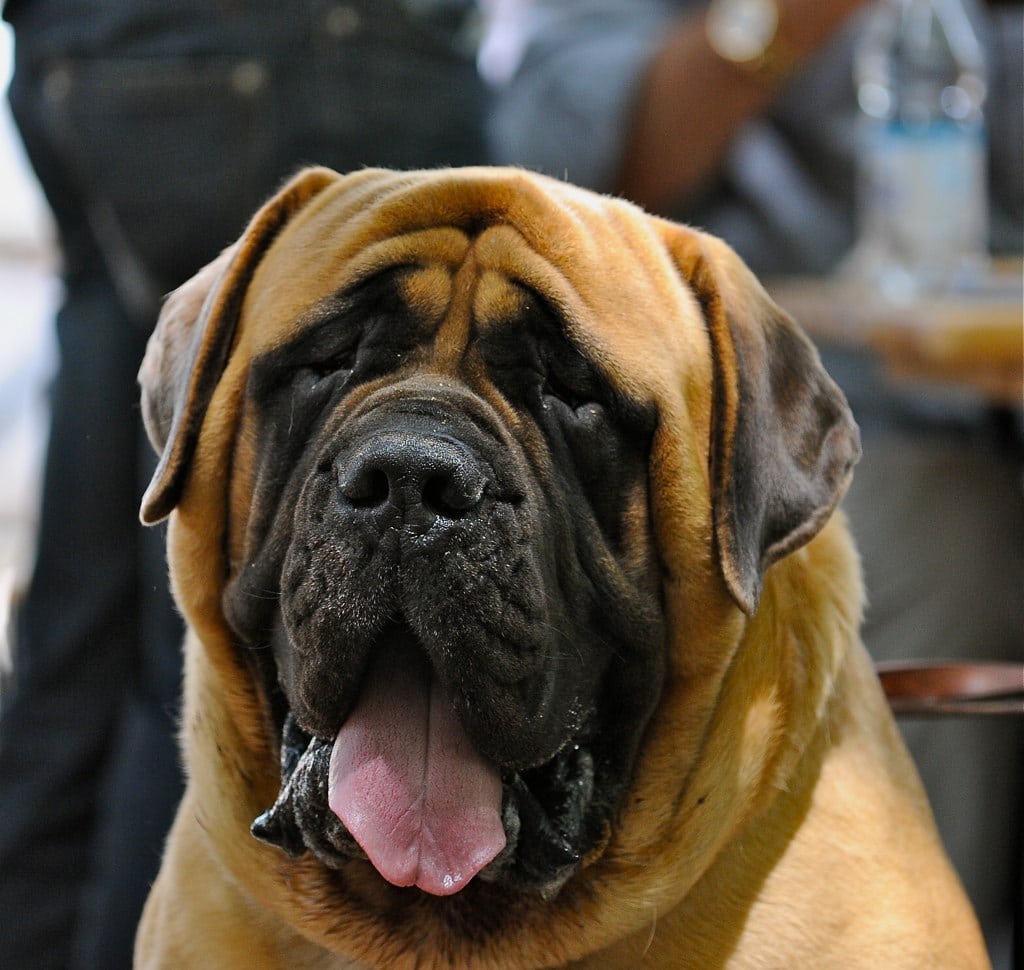 The English Mastiff not only carries the distinction of being one of the tallest dogs in the world, but also the heaviest. That probably comes as no surprise to you judging from the size of that head! Standing at 37 inches and weighing in at up to 230 pounds, the Mastiff is known for their courage, good temper, and nobility.

Because of their size, they often come with various health issues. Hence, why there’s such a drastic fluctuation in their life expectancy. They make amazing additions to the family and require frequent exercise to manage their weight and prevent related issues.

The English Mastiff nearly went extinct in the 20th century until their popularity made a resurgence and the demand for these lovable giants was off the charts. 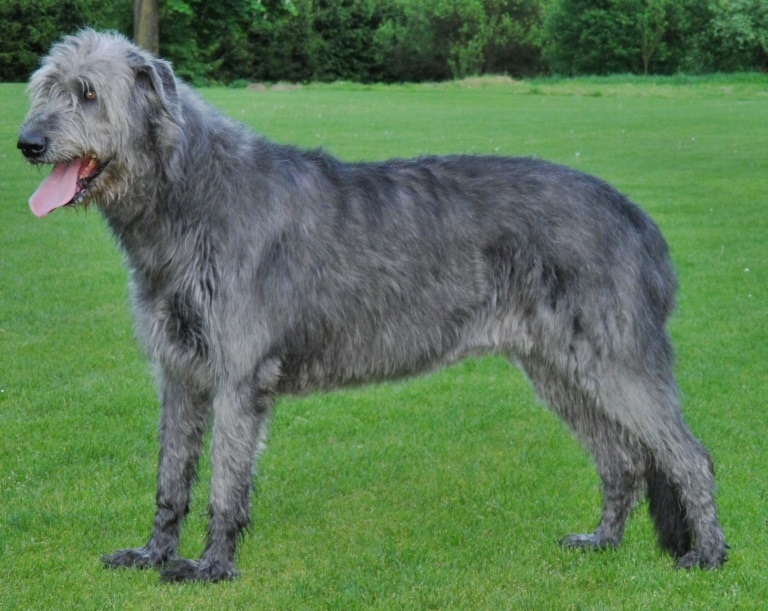 The Irish Wolfhound was bred to be a spotter. Of the hound familial tree, the Irish Wolfhound may not be the fasted but what it lacks in speed, makes up for with its sight, tenfold. This breed stands at 37 inches and is built with an abundance of muscle, they come in many beautiful shades like grey, red, fawn, black, and white.

They are known for being very introverted but loving and because of their independence are not prone to separation anxiety.

Ireland amassed an army of these hounds. According to the tales, Cormic Mac Airt, a High King of Ireland, had an army of 300 hounds between the 2nd and 4th centuries. 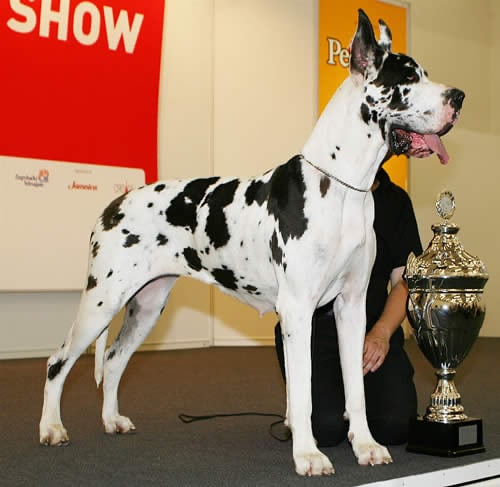 The Great Dane is the tallest dog in the world!

Also known as the German Mastiff, these wonders of canine evolution reign over the rest at 44 inches at their maximum height when a Great Dane in Michigan officially measured in back in 2012 and 2013. They were originally bred to hunt boar, bears, and deer. We can say they picked on someone their own size.

In contrast to their intimidating presence, these are gentle, loving creatures and make excellent guard dogs and family pets for the home. Also, if you have little ones, they give great piggyback rides.

Daily exercise is imperative for this breed. Two, light jogs a day should be enough for them in adulthood, but due to their massive size it’s important to exercise moderation to prevent any hip issues in the future. Even when they’re puppies, running should be avoided until they’re at least two years old to avoid damaging their bones.