Bath toys were created to encourage kids to take their baths. The rubber Disney toys – like Donald Duck – were popular, but expensive to license. Toy makers wanted a less expensive model. In comes Peter Ganine, a sculptor who designed the model on which today’s ubiquitous version is based. His model sold 50 million pieces until the patent expired.
The cheaper vinyl versions spread all over in the 1960s, and the toy became a cultural icon. As has often been the case, artists want to create their own versions of icons to make commentary on society. It is the artists who are responsible for creating some of the largest rubber ducks in the world. Also, commercial interests inspire others to build these massive sized ducks. 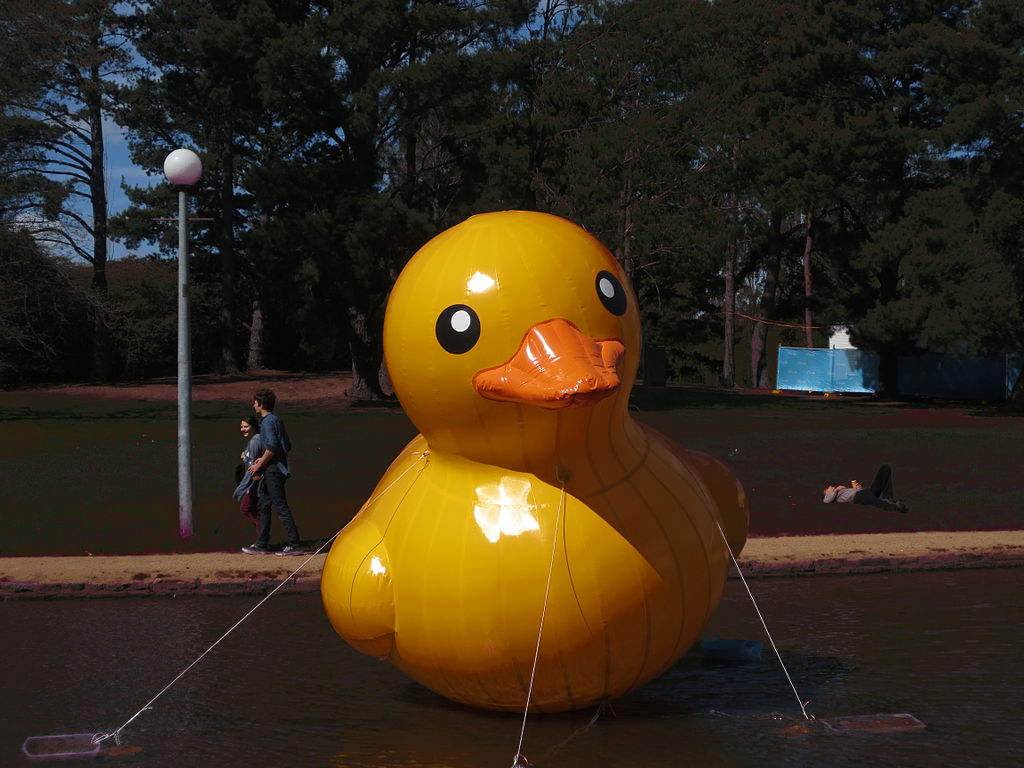 Rubber ducks were meant to entertain us while we’re in the water. What could be more entertaining than a giant rubber duck in your swimming pool? You can find relatively large-sized inflatables for sale anywhere on the internet. They come in PVC varieties and are most often made in China or developing nations.

Many American inflatable toy producers are upset by the number of Chinese manufacturers producing near-identical versions of what they make, and are trying to sue in federal court in the United States. 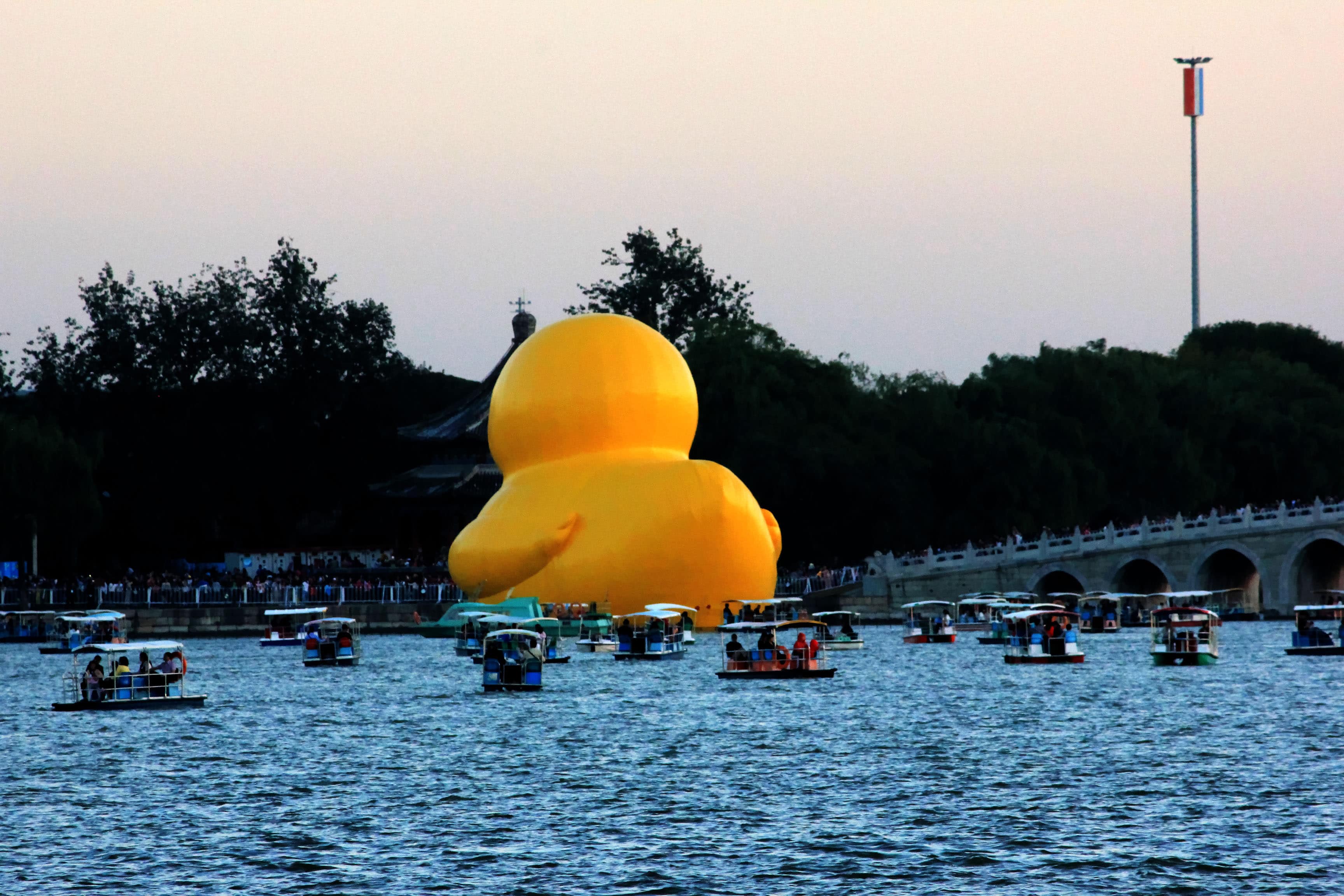 Big rubber ducks serve little other purpose than for humans to gawk at. If you’re hoping to draw that kind of a attention, you don’t need to commission a piece by an artist or rent a prebuilt behemoth. You can order a duck of a variety of sizes from China. For from between $2000 to $5000, you can have delivered – at some cost – an inflatable rubber duck of up to 22 feet tall.

These giant inflatables were popularized by the designs of Florentin Hofman, a Dutch artist responsible for most of the ducks on this list. Chinese copies are prevalent. 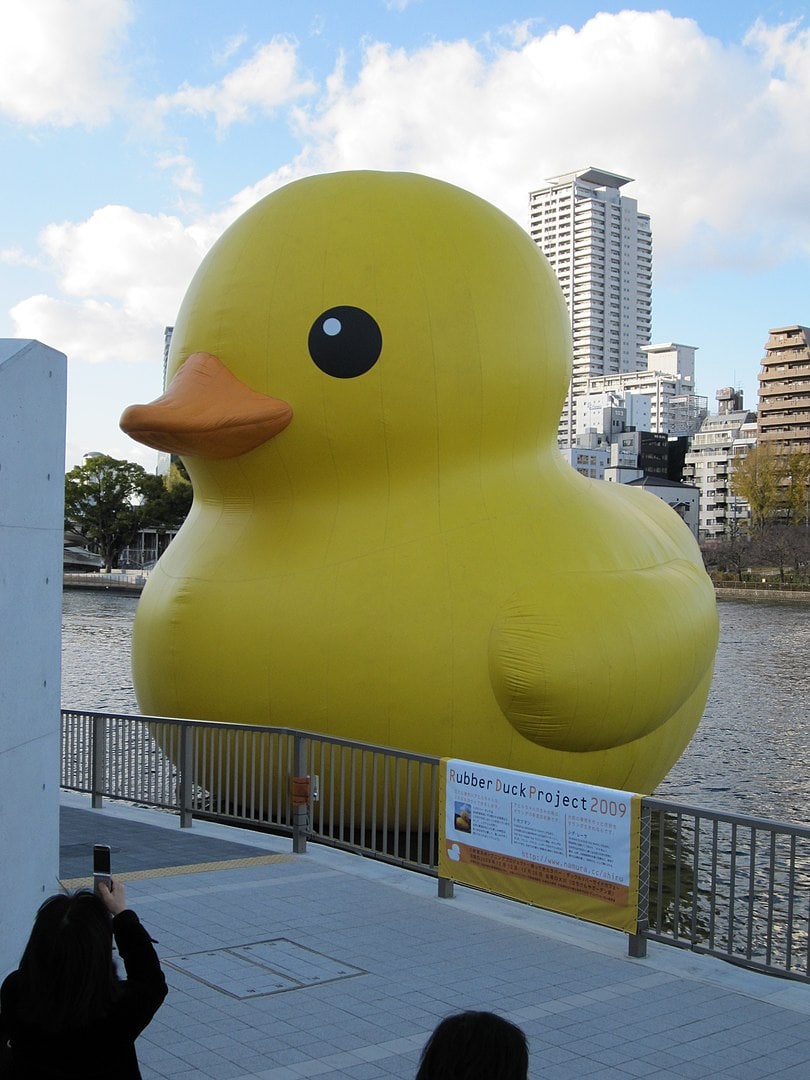 Florentijn Hofman is a Dutch sculptor credited with popularizing the giant duck phenomena. His idea was to present the rubber duck as a universal, non-political messenger of joy and fun. His first duck was one of the largest on the list. They are hollow, with a motor inside to inflate them, and are made of varying numbers of PVC pieces that are interconnected.

This version of the floating statue appeared at an aquatic festival in Osaka.

This version of Hofman’s statue appeared in Japan twice. Another version appeared an additional two times. This duck is the smallest he has built since he began the work in 2007 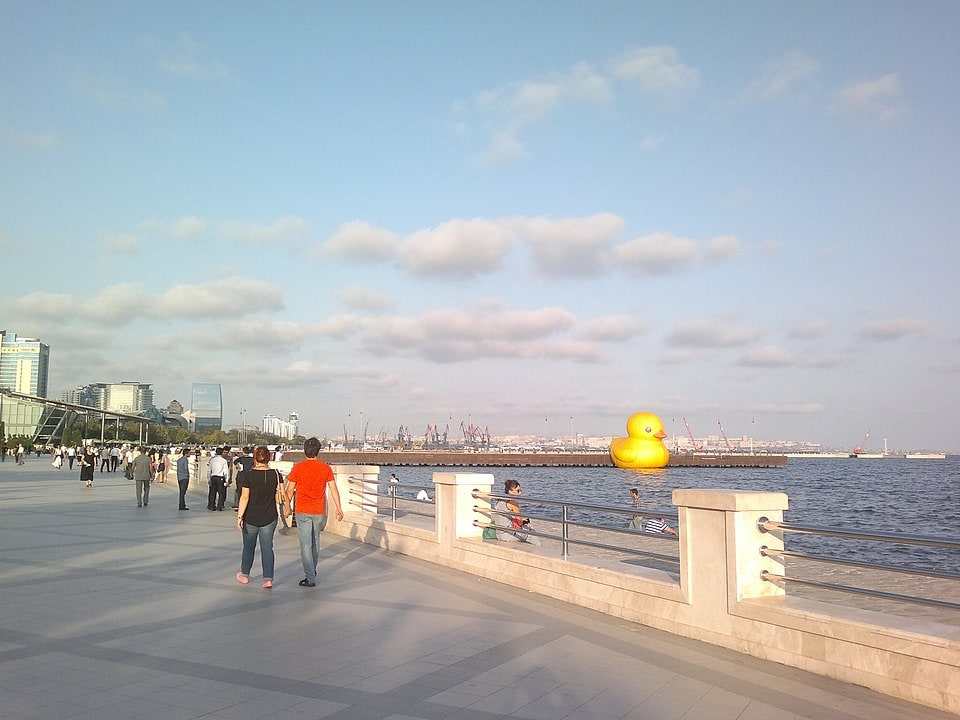 Hofman built several ducks of different sizes over the years. This ostensibly allows his work to appear in a greater variety of places, like rivers or lakes where his original model would be too large to place safely. This version appeared in four other cities at different times:

When the statue was on display in Belgium, it was vandalized: stabbed 42 times, which of course deflated it. 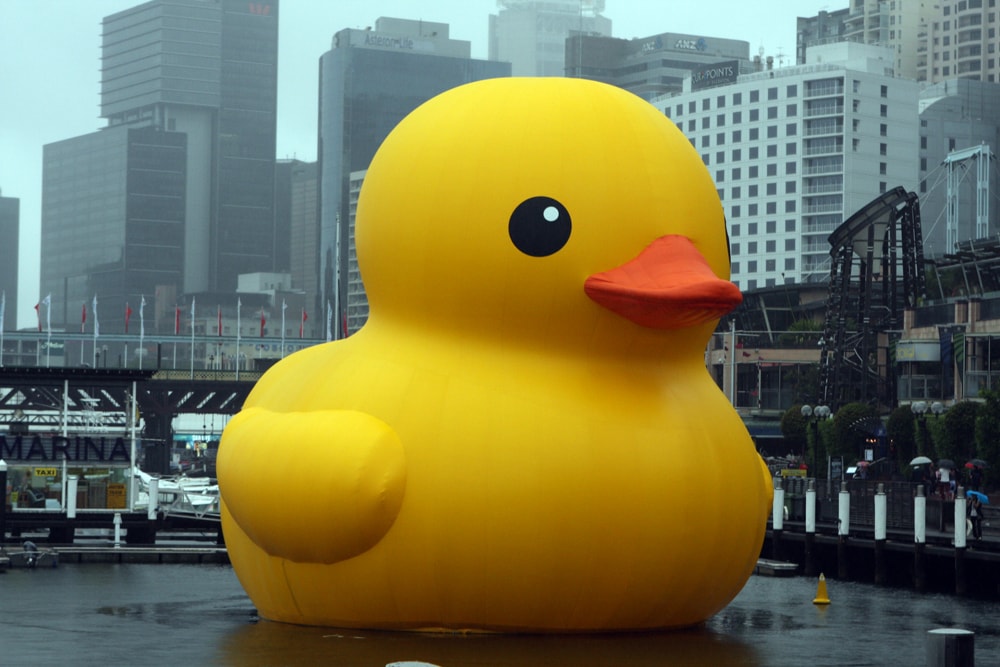 Hofman appeared to have built a duck statue just for use in Australia. The only country where he used the duck with the above dimensions is Australia. Both appearances were in Sydney one year apart. Each visit was for a festival held annually in Sydney. The duck sat in the Darling Harbour one year and floated on the Parramatta River the next.

The 2013 festival was geared towards showcasing the artists of Sydney. 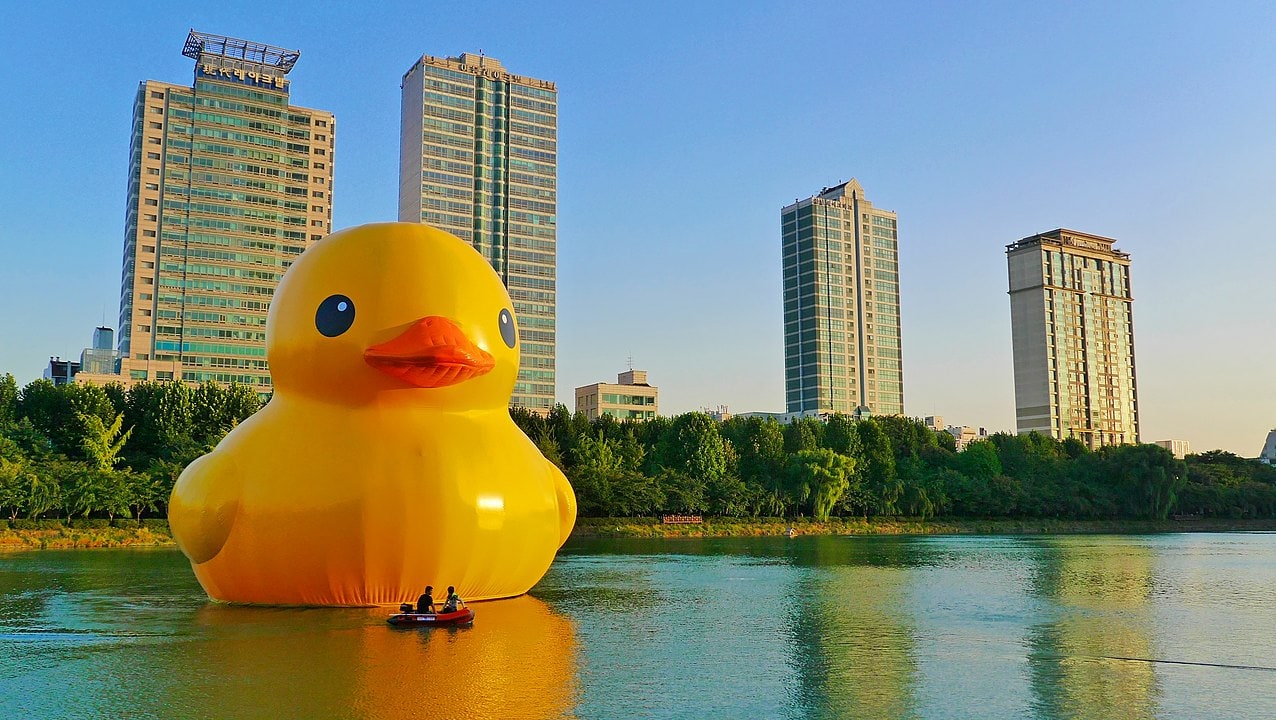 When Hofman brought this version of his rubber duck statue to Seoul, South Korea, it was to celebrate the grand opening of the Lotte World Tower and Mall. That tower is the tallest building in the country and the 6th tallest in the world. It was a popular celebration featuring the duck, that is, until the duck deflated while floating in a lake.

Just before Hofman placed the duck, a ferry had capsized on that same river, resulting serious casualties. Hofman dedicated the artwork to those who lost lives or were injured. 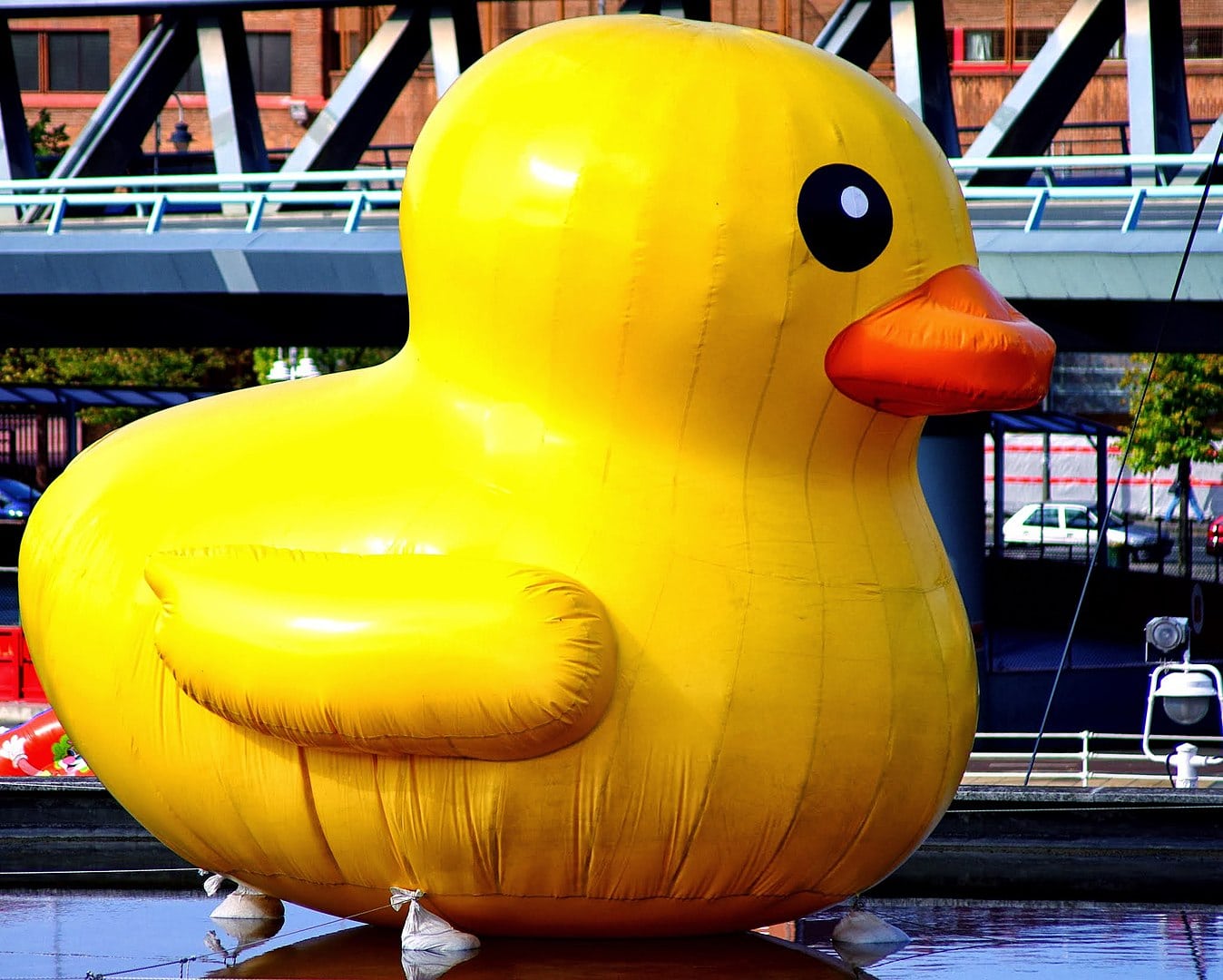 In the spring of 2014, another one of Hofman’s ducks arrived in Ho Chi Minh City in Vietnam as a lone tourist attraction. It rested in Ban Nguyet Lake for about five weeks. Crowds filled the small bay area on the lakeshore to observe the artwork.

The appearance was part of a festival to encourage tourism to the city, formerly known as Saigon.

One of Hofman’s largest versions of this statue toured several cities in Taiwan. One day during its stay it deflated. There was some speculation regarding what caused it to deflate. One woman thought she saw a large bird attack the statue. A cooler observation was that the unusually high temperatures caused the duck to overheat. 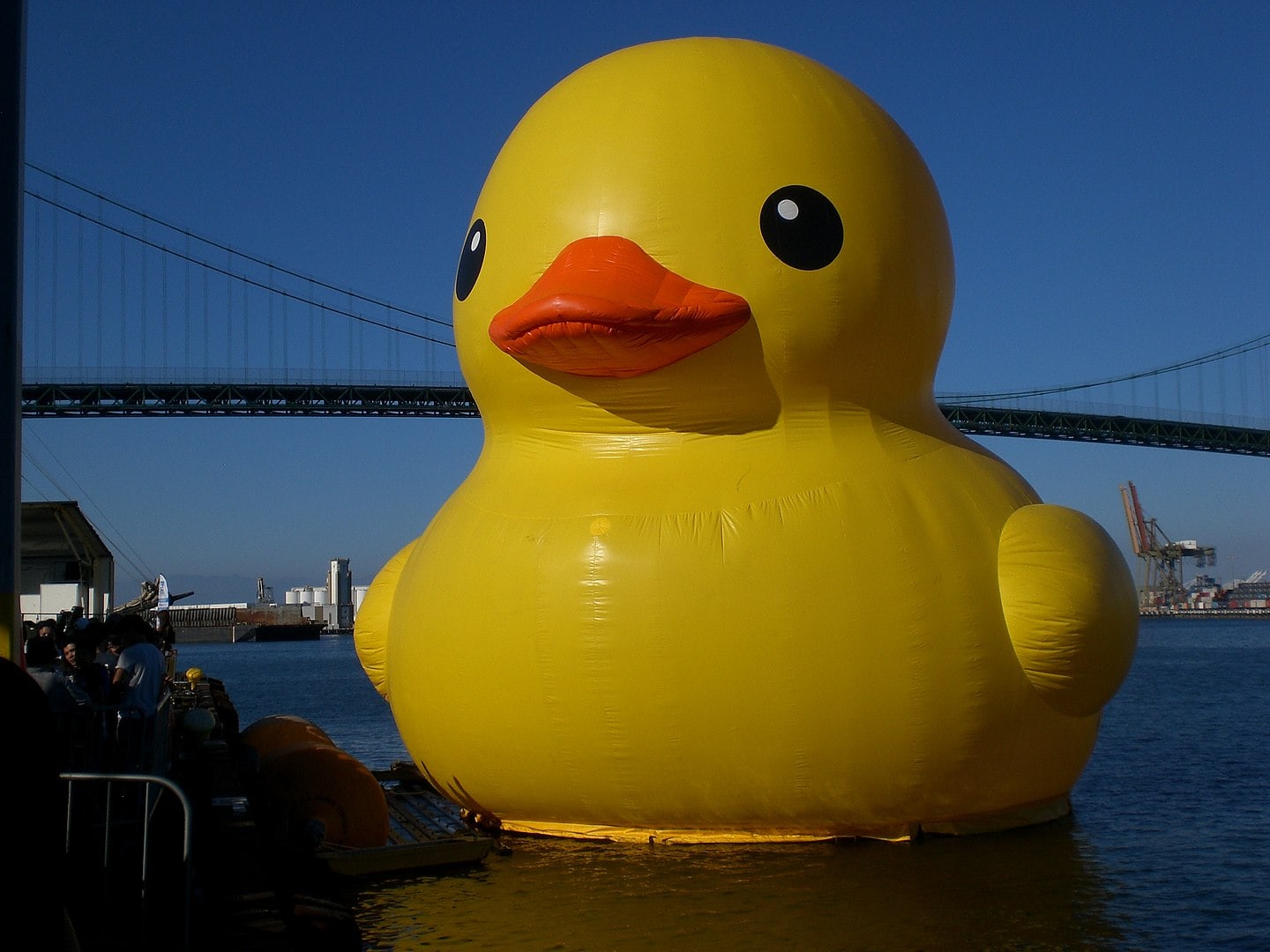 The owner of this giant rubber duck has named it “Mama Duck.” If you’re guessing there is some kind of connection between this duck and the others created by Hofman, you’d be correct. Craig Samborski, the owner of the company that owns and promotes Mama Duck’s public appearances once asked Hoffman to build and show one of his ducks. Hoffman claims, but was not able to prove, that Samborski never paid him and stole the design to build a new duck. Samborski claims his duck was based on a 1930’s Chinese blueprint.

The first time Samborski showed the duck at a tall ships festival, it deflated. Hofman felt that justice had been done. 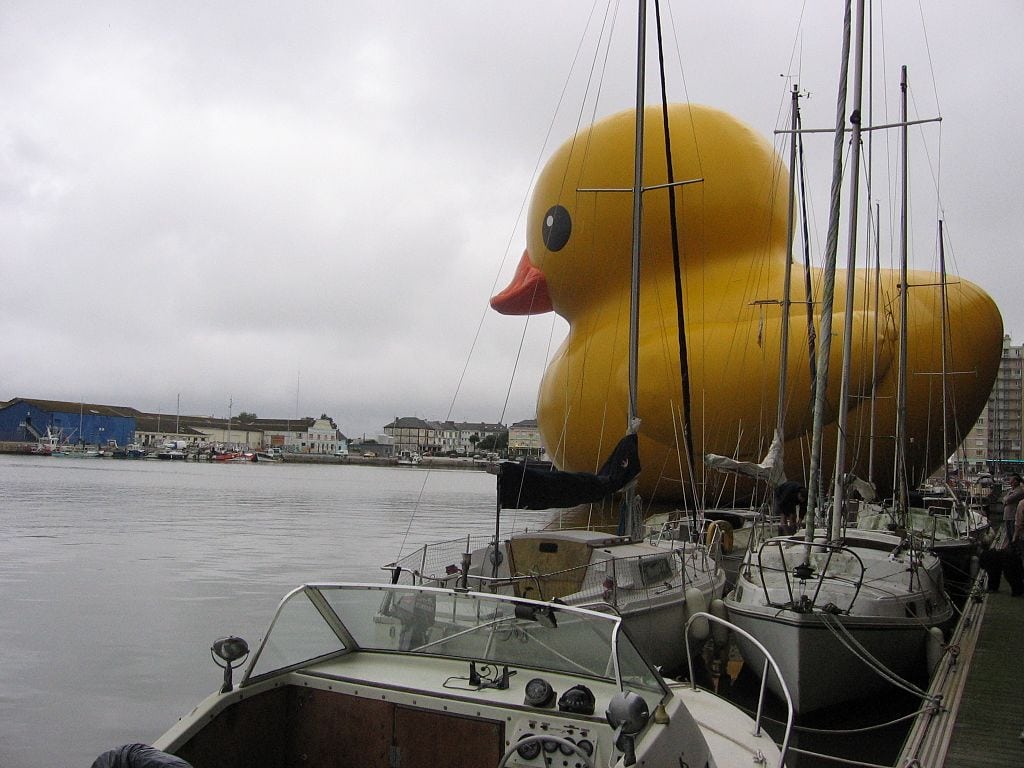 The first place one of Hofman’s statues appeared was in Saint-Nazaire, France in 2007. It is the largest  he has ever created, and the largest rubber duck ever built. It was part of the Loire Estuary art exhibition.

This was the only sculpture that moved on its own. It was built on a pontoon boat and had a motor that propelled the duck down the Loire River from Saint-Nazaire to Nantes.