A reservoir is another name for a man-made lake, an artificial lake created along with or next to dams to store water for use in various applications. Several ones fulfill numerous functions at the same time.

The creation of man-made lakes may be accomplished in a variety of methods, including the excavation of land and the diversion of water flow to construct an embayment that will serve to catch water and store it.

There are many reservoirs located in different parts of the world. In the United States alone, humans have created more than 50,000 lakes. This accounts for almost the same number of natural lakes in the United States.

Residents cherish many for the variety of opportunities for outdoor pleasure that they give, and the ecosystems that they provide are of incalculable value to the native flora and fauna.

We will now discuss the 8 largest man-made lakes in the United States. 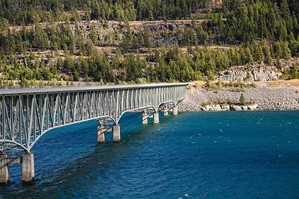 Lake Koocanusa is the eighth-biggest lake in the United States and has a maximum depth of 310 feet. Its total capacity is 5,869,200 acre-feet.

Canada and the United States share the reservoir through the states of British Columbia and Montana. The Libby Dam on the Kootenai River in 1972 was responsible for creating this lake, which now spans 90 miles over the northern part of Montana.

The primary function of Lake Koocanusa is to provide potable water to both the United States and Canada. It holds thirteen percent of the total water volume of the Columbia River system. In addition to these benefits, the reservoir serves as a haven for several species and protects against flooding.

The lake is also home to some of the most common fish found in freshwater, including rainbow trout, burbot, and sockeye salmon.

The initial syllables of Kootenai River, Canada, and the United States of America were combined to create the peculiar name “Koocanusa” (KooCanUSA). 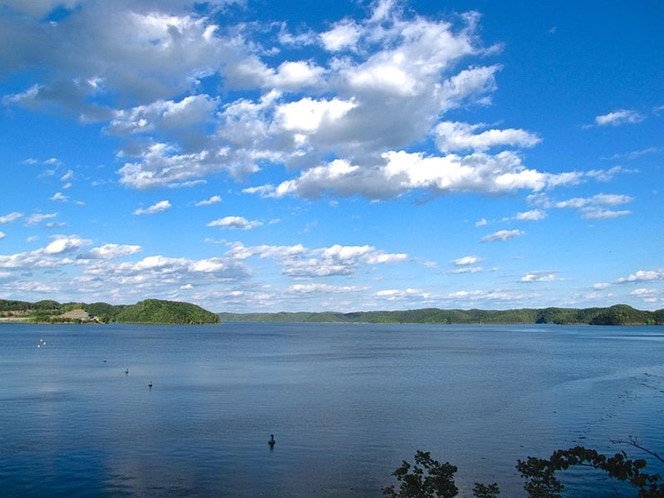 Lake Cumberland is the seventh biggest man-made lake in the United States, with a total capacity of 6,089,000 acre-feet. This places it in the seventh position among the largest man-made lakes in the world. Its coastline is 1,225 miles long and stretches through many counties in the state of Kentucky, including Wayne, Russell, Clinton, Pulaski, Laurel, and McCreary counties.

The reservoir has a surface area of 65,530 acres, equivalent to 265 square kilometers, and a storage capacity of 7.5 cubic kilometers of water, sufficient to fill the whole state of Kentucky with a depth of three inches of water.

Flood control and the generation of hydroelectric power were the initial motivations for the creation of Lake Cumberland.

Over time, the reservoir has developed into a significant driver of tourism and an important economic component for the surrounding region. The construction of the Wolf Creek Dam on the Cumberland River led to its formation.

Lake Roosevelt, often referred to as the Franklin D. Roosevelt Reservoir, is the sixth-largest man-made lake in the United States. It has a total capacity of 9,562,000 acre-feet, making it the sixth-most popular name for the reservoir.

It is the biggest reservoir in Washington state, encompassing a total area of 125 square miles, thanks to its staggering volume and surface area. In addition, Lake Franklin has a maximum depth of 46 feet and a coastline that spans more than 600 kilometers.

The reservoir is home to a diverse collection of freshwater fish species, including the walleye, panfish, largemouth bass, and smallmouth bass, among others, such as the northern pike. 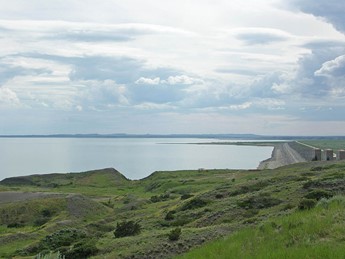 Fort Peck Lake is the fifth biggest man-made lake in the United States. Its total capacity is 19,100,000 acre-feet, making it the fifth-largest lake in the country. The construction of the Fort Peck Dam on the Missouri River in Montana created the principal reservoir known as Fort Peck.

It has a lengthy beachfront that extends for a total of 1,520 miles, making it even longer than the coastline of California. At its lowest point, Fort Peck Lake is 220 feet deep, and it has a surface area that spans a whole surface area of 245,000 acres.

The management of flood risk, improvement of water quality, and generation of hydroelectric power were the primary motivations for the construction of Fort Peck Lake. 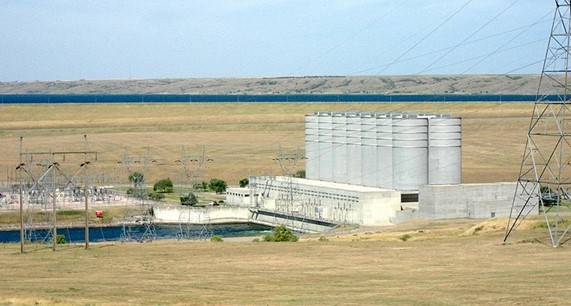 With a total capacity of 23,500,000 acre-feet, Lake Oahe is the fourth biggest man-made lake in the whole country of the United States. It stretches for 231 miles and has a total land area of 374,000 acres throughout South Dakota.

It was made possible by the Oahe Dam, which has a height of 245 feet and a length of 9,360 feet, making it the sixth biggest dam on the earth in terms of the amount of water it can contain.

Even though humans created Lake Oahe, it is home to a diverse ecosystem with a wide variety of species living in freshwaters, such as walleye, pike, catfish, bass, and salmon. Each year, close to 1.5 million visitors stop by the reservoir.

The reservoir was constructed for flood control and the provision of hydroelectric power, irrigation, recreation, advantages to navigation, and a habitat for various animals. 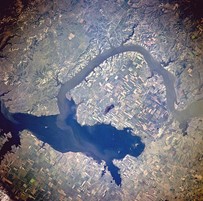 Lake Sakakawea in North Dakota has a total capacity of 24,300,000 acre-feet despite having a surface size of 307,000 acres and a total surface area of 178 miles. It is the third-largest lake in the United States and the largest man-made lake in North Dakota.

The lake has a maximum depth of 180 feet and a shoreline that extends up to 1,320 miles. The Garrison Dam created the reservoir to be used for various recreational purposes, including boating, fishing, and other sports.

In addition to this purpose, the dam was constructed to be used for irrigation, navigation, managing floods, and generating hydroelectric power. The Missouri River Dam’s construction resulted in Lake Sakakawea’s completion in 1953.

It took the lake anywhere from three to 10 years for Lake Sakakawea to reach its full capacity. 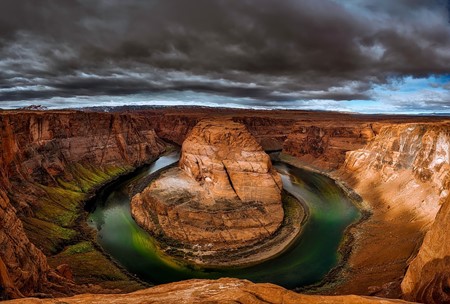 Lake Powell is well-known for its breathtaking scenery, drawing approximately two million tourists and visitors annually. In addition to its role as a massive water storage facility for the U.S. states of Colorado, Utah, and Wyoming, Lake Powell is also an important resource for New Mexico.

The Glen Canyon Dam, located on the Colorado River, formed Lake Mead and Lake Powell. It is situated at the intersection of Arizona and Utah and has a depth that may reach 532 feet.

The melting snow over the springtime is the source of the water added to the reservoir. 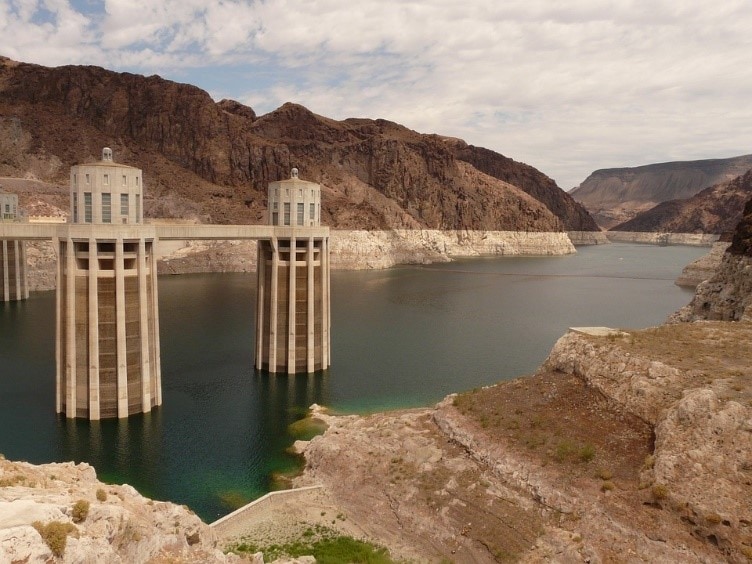 Lake Mead is the largest man-made lake in the United States. It has a total capacity of 28,945,000 acre-feet and a length of 112 miles, making it the longest lake in the country. It is also one of the largest man-made lakes in the world, with a depth that reaches a maximum of 532 feet at its deepest point and a coastline that can reach a maximum of 759 miles in length.

The world-famous Hoover Dam was constructed on the Colorado River, which led to the formation of Lake Mead, which can be found on the boundary between Arizona and Nevada. The reservoir was constructed in 1936 to provide hydroelectric power, a water supply, opportunities for recreational activities, and a home for a wide variety of animal species.

Due to the ongoing drought in Arizona, Nevada, and California, Lake Mead rarely reaches its full capacity. However, it is the biggest dam in the United States as measured by storage space.

The last time Lake Mead reached its full capacity was in 1983. This is significant because the lake provides water to more than 20 million people in the surrounding states. Lake Mead’s average water level is around forty percent of its total capacity.