China is the world leader in industrial output and exporting of goods. It follows that the majority of the largest shipping ports in the world would be found there. Additionally, the Chinese government has placed emphasis on building up the Chinese economy via international trade and exports.

The importance of Chinese exports may be well established. However, China’s import business also drives trade. Chinese imports as a percentage of worldwide imports rises every year.

Other Southeast Asian countries are China’s only competition in shipping ports, save a Middle Eastern port. The major ports in these countries displaced the port in the Netherlands, which is still the largest European port. It was for decades the busiest in the world.

Shipping has its own units of measurement like knots for speed. They judge size and volume using: 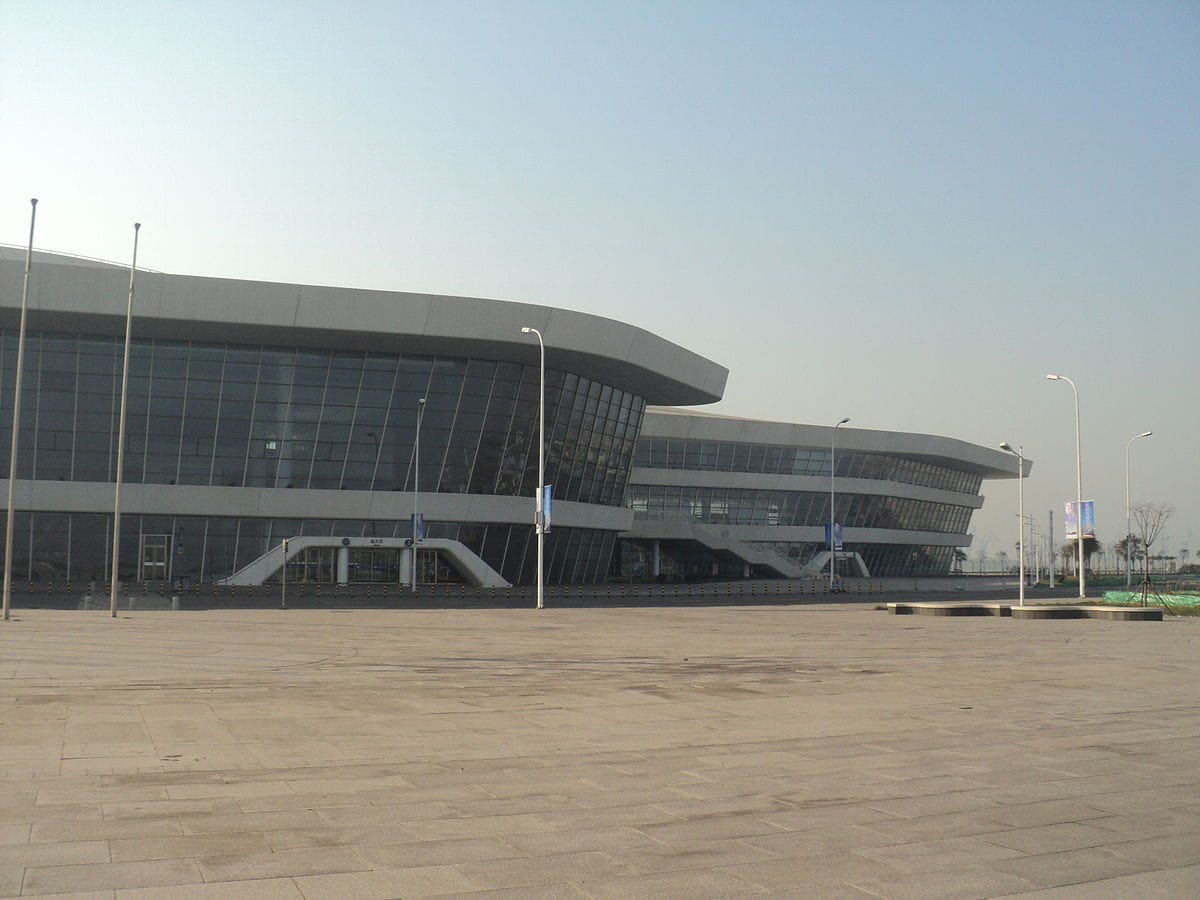 The Port of Taijin is the main waterway entry point to Beijing. The port is at the mouth of the Heihai River. That river empties into the Bohei Bay. The port is one of the fastest growing ports in the world and has been since opening in 2010.

The Chinese government has been incorporating the old state-run organizations that were responsible for the operations of their ports. The Taijin Port Group is the parent company of two entities that operate the port and the container-handling assets separately.

The port also has services to handle passenger ships and has received over 100,000 passengers annually.

This port is one of the few to have held steady profits during the worldwide financial crisis of 2008.

The port opened in 1979 to supplement intake capabilities at Port Rashid. It has grown in capacity to becoming the largest industrial port in the Middle East. The port recently completed its TEU capacity to max out at 17 million. Jebel Ali has been ranked as one of the most efficient (regarding the number of containers moved) and productive ports.

The port is a subsidiary of the DP World corporation, a company specializing in port operations.

Out of all the top container ports, Jebel Ali is located the furthest from the world’s main shipping routes. 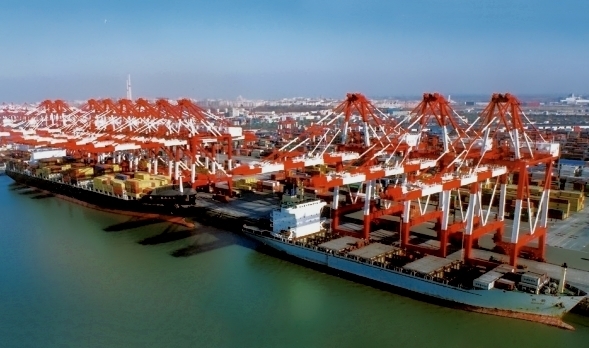 This port is located on the Yellow Sea that sits between China and Korea in the Jiaozhou Bay. The port faces Gunsan, South Korea. It is port capable of handling large bulk transports that import and export coal, ore, grain and other bulk items. The Qingdao port has an oil and liquid chemical dock that can handle ships that carry as much as 280 thousand tons.

Qingdao is building a new terminal that can accommodate the new class of massive container ships. 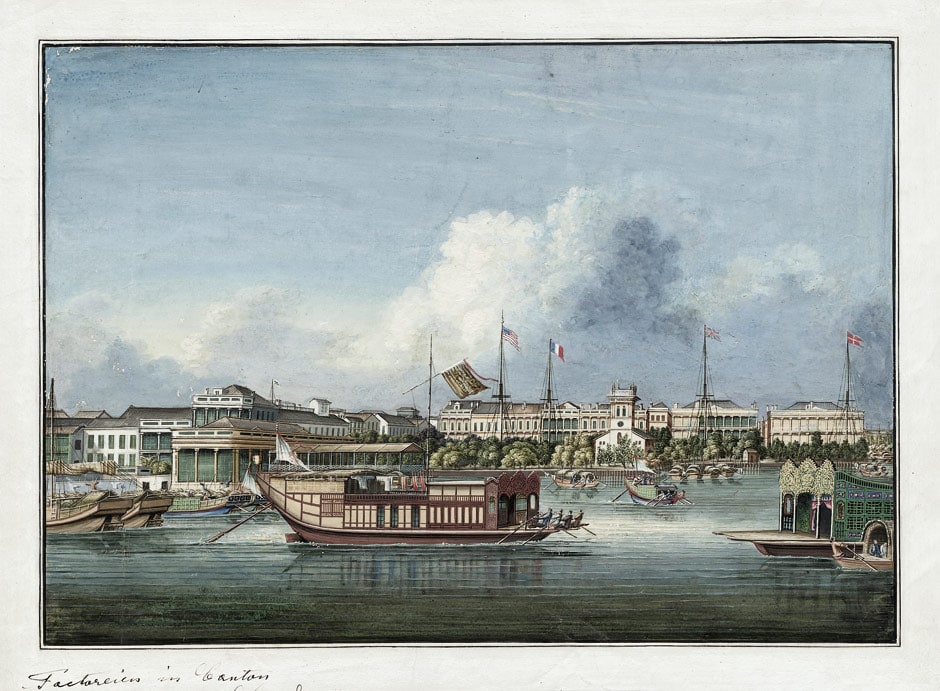 Guangzhou’s importance to the Chinese shipping industry dates back to the Qin dynasty. That’s because the city itself sits at the junction of the three most important rivers in South China, the tributaries to the Pearl River. The shipping routes at Guangzhou were “the Silk Road of the sea” back when the city was known as Canton.

The port’s Xinsha area serves as an import point for many vehicles from foreign automakers, as well as exporting vehicles made at Chinese factories. It is one of four ports designated by the Chinese government for this purpose.

Guangzhou’s port is the country’s largest port for handling coal. 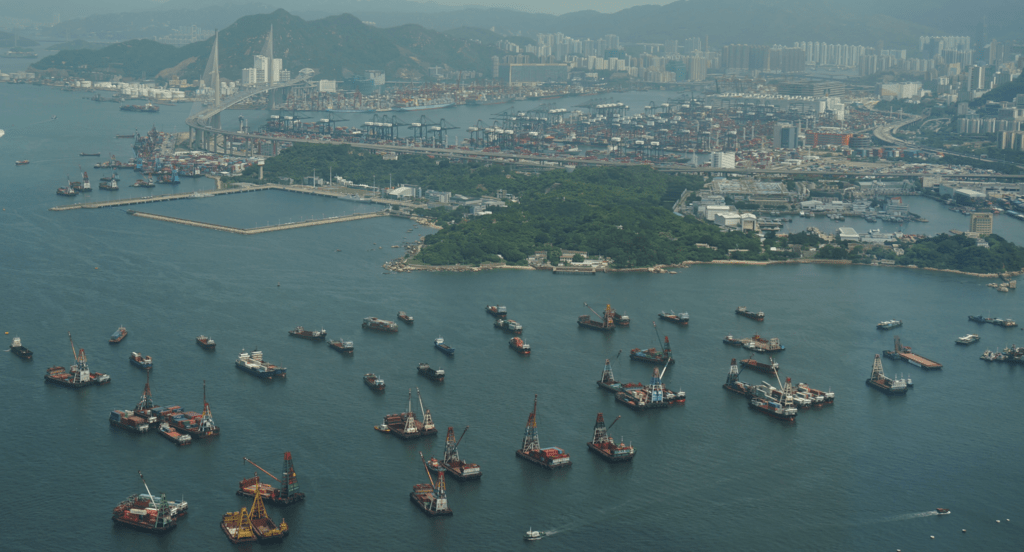 Hong Kong is legendary for its role in international commerce and shipping, especially during its years of independence from the PRC. It’s located on the Pearl River Delta by the South China Sea. It has been at several periods in history the busiest port in the world.

There are nine container terminals at the port. They can handle over 18 million TEUs, and handle 60% of all container traffic into Hong Kong.

The port also contains drydock facilities for the repair and storage of vessels. There are drydock ports for large carriers and small vessels.

One reason why Hong Kong’s place on the list of largest container ports has declined is because of a lack of automated operations, making it more expensive to ship there relative to other Chinese ports. 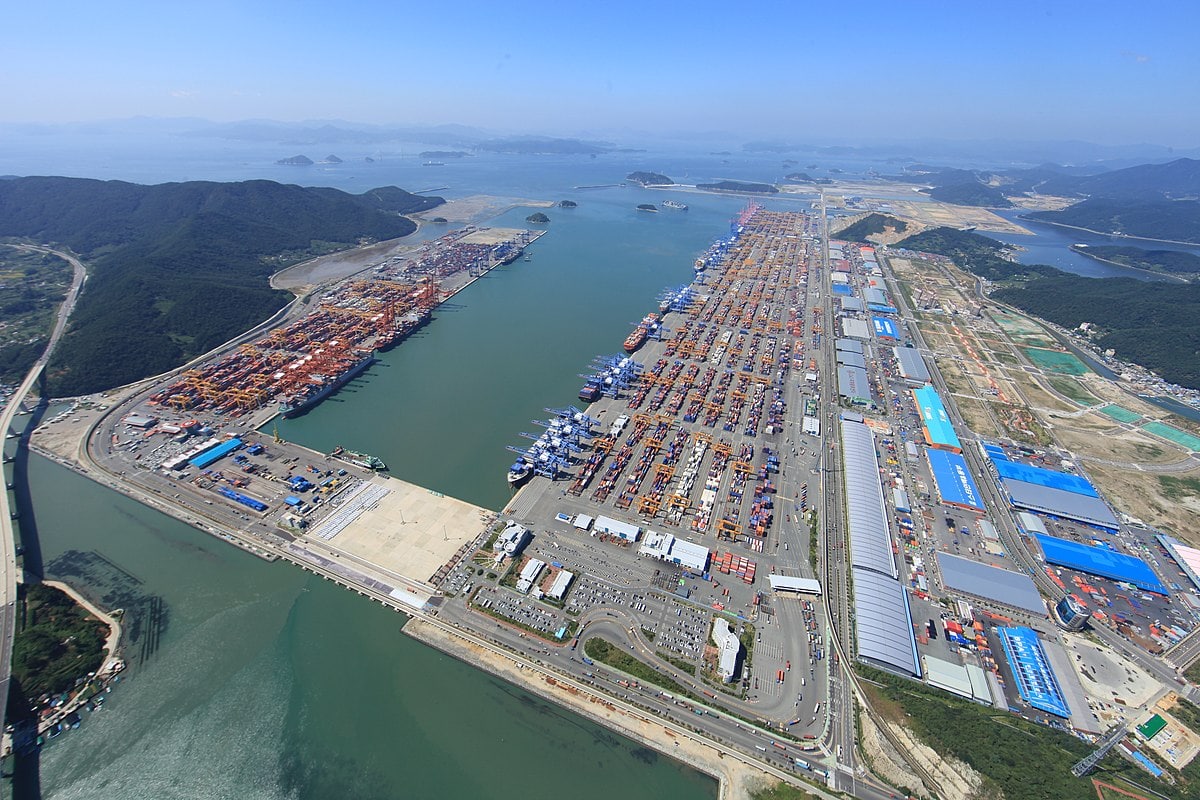 Busan is a legendary port city in South Korea. It was Korea’s center of a trade agreement between China, Japan and Korea during the latter part of the 19th century. During the Korean War, many in South Korea fled to the city and stayed. The manufacturing boom in Busan in the 1970s caused significant migration to the city and produced a business climate that developed a prodigious shipping industry.

The port also handles large cruise ships. Its International Passenger Terminal is the second largest of such facilities in Asia.

Busan handles 80% of South Korea’s containers and 40% of the national fishery production. 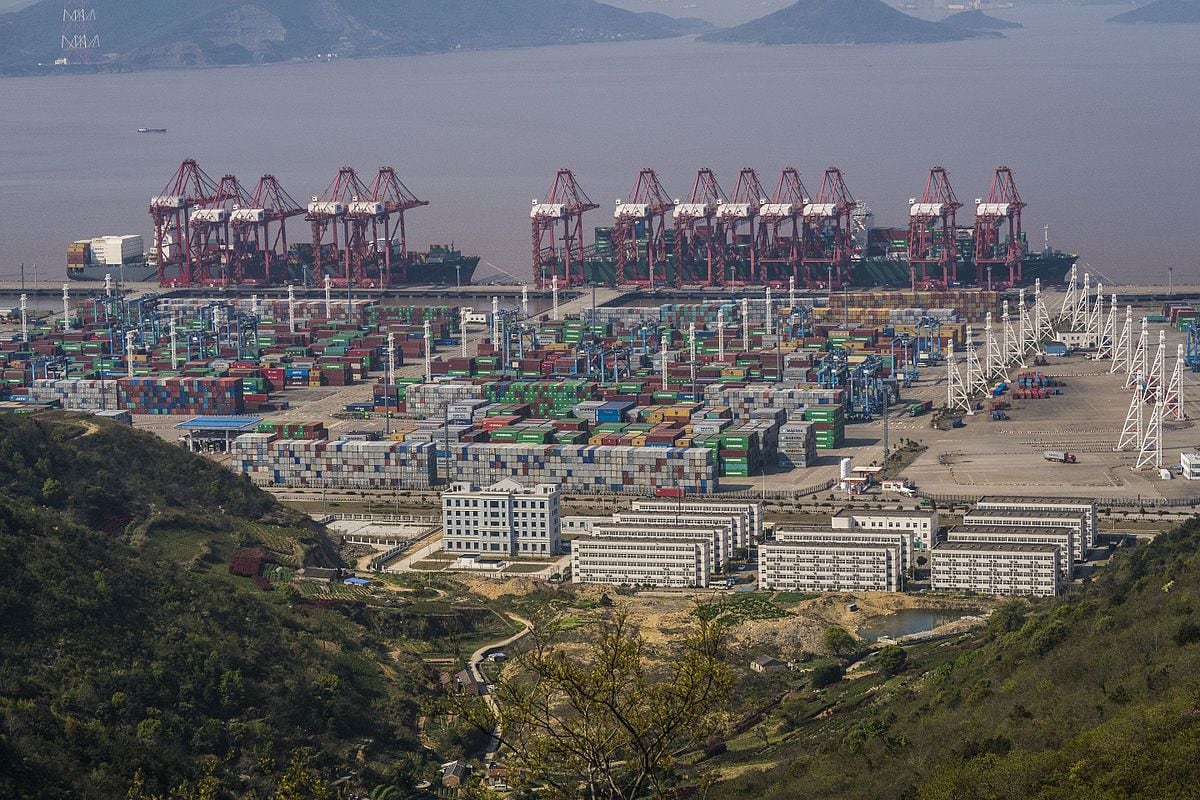 The port at the Chinese city Ningbo was established during the Tang dynasty. It was one of the five Chinese ports involved in the 19th century trade agreement between China, Japan and Korea.

The port was the first to exceed 1 billion tons of cargo a year according to the port authority officials. 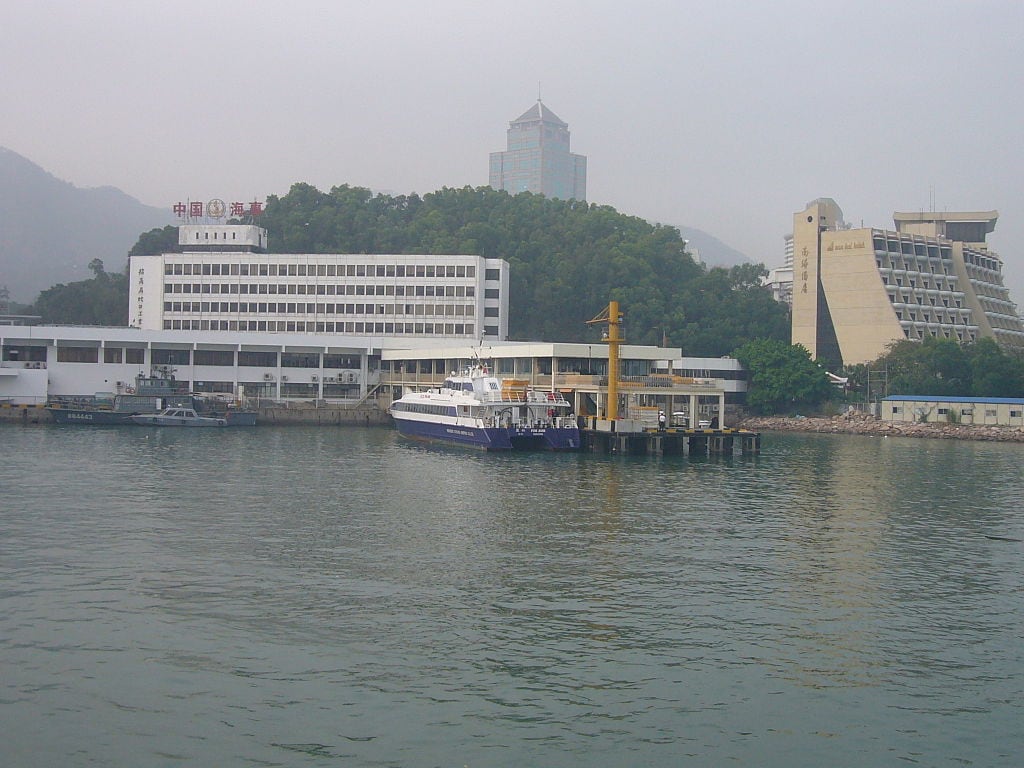 The port at Shenzhen is a collection of ports along the coast of Shenzhen. The ports act as a trade center for commerce between Hong Kong and mainland China. It is also an important part of China’s import/export economy, and one of the fastest growing port cities in the country. Its rapid growth is due to the proximity to the manufacturing regions in the south of China.

Shenzhen wants to expand its international business. However, it is limited by the lack of entryways from the coast. The current ones are too small to accommodate the VLT ships. Efforts to expand are being blocked by the Chinese government and by the planned expansion of the Hong Kong airport.

Singapore is well known as an international shipping and trade center. Historically, the nation had been a port serving much of South Asia, being a major importer and exporter of high-quality goods. British rule revitalized Singapore as an import/export capital of the region, linking China and European markets. British traders imported raw materials which were turned into commodities to be exported. When Singapore finally gained independence, it continued this strategy.

Singapore became the busiest port in the world, overtaking Yokohama in Japan, Rotterdam in the Netherlands and Hong Kong.

The major ports in Singapore are the Port of Singapore Authority (PSA) and the Jurong Port.

PSA plans on closing the current port and opening a near fully-automated port, the Tuas Megaport. 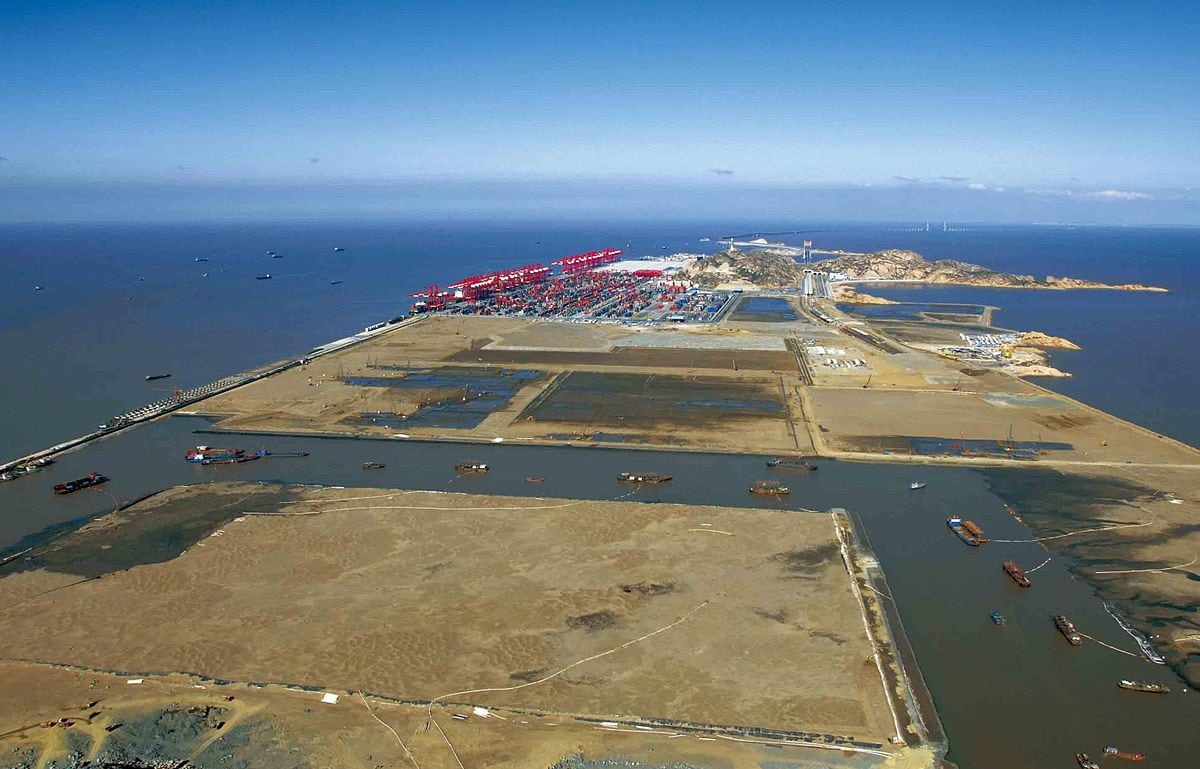 The port of Shanghai is the largest, busiest port in the world. In 2010, Shanghai passed the previous largest port, the ports in Singapore to take the top spot.

Shanghai is located at the mouth of the Yangtze River. This location made it ideal for domestic and international trade. The Yangtze runs the length of China east to west and empties into the East China Sea.

After the communist revolution, Shanghai was cut out of the international trade market. The economic reforms allowed Shanghai to become a power again.

The Yangshan Deep Water Port is the largest of the ports in Shanghai and accounts for the vast majority of container ship traffic.

There are as many as 10,000 ships at Shanghai at any given time.