Statues of Buddha play an essential role in Buddhism’s culture and tradition. They are visual reminders of the Buddha, the person credited with founding Buddhism, and serve as a reminder of the teachings and counsel he provided.

Statues of the Buddha serve as a wellspring of creativity and impetus for many followers of Buddhism. As a result, they are often used as a focal point during meditation, assisting practitioners in emptying their thoughts and developing a sense of inner serenity.

Buddha statues are essential not just because of their spiritual value but also because they are often pieces of art that are exquisitely constructed. You may find them in various stances and styles, and each has its own significance and meaning.

In many instances, the sculptures are accompanied by inscriptions or other texts that offer an understanding of the teachings and wisdom that the Buddha imparted.

Keep on reading to find out the 8 largest Buddha statues worldwide. 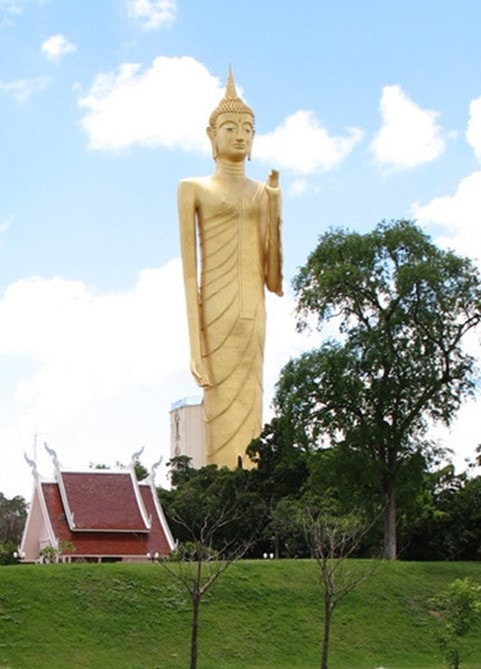 A massive statue of the Buddha known as the Luangpho Yai may be seen in Roi Et, which is situated in Thailand. The statue is shown in the classic sitting meditation position, with the hands resting on the lap and a calm look on the face.

The buildings that make up the temple are home to several other smaller Buddha statues in addition to shrines, gardens, and other structures.

Visitors at the temple are often observed participating in various religious rites, including praying, presenting gifts to the statue, and engaging in other acts of worship.

The striking and stunning aspect of the statue is achieved by its composition of concrete and its covering with gold leaf. The statue of Luangpho Yai is regarded not just for its religious importance but also for its beauty and grandeur as an artistic achievement. 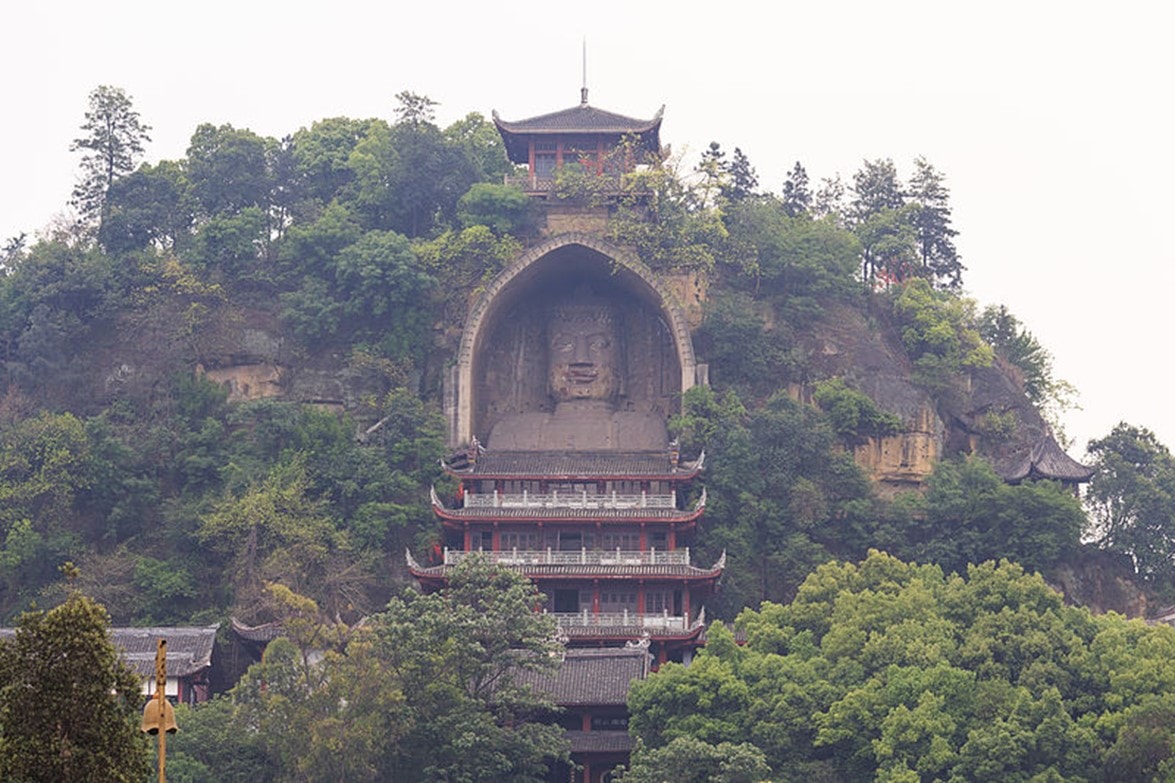 A tall religious structure, the Rongxian Giant Buddha statue may be found in the Rongxian County of the Sichuan Province in China.

A single piece of white sandstone was used during the whole process of carving the monument, which took place during the Tang Dynasty (618-907 CE). It represents the Buddha of boundless light and life, reclining in the lotus posture with a tranquil smile.

The temple grounds provide stunning vistas of the countryside, which contribute to the site’s popularity as a destination for visitors and those traveling for religious purposes.

The Rongxian Giant Buddha statue is a well-preserved and awe-inspiring tribute to ancient China’s aesthetic and religious traditions. Despite its age and the obstacles of the natural environment, the statue has been able to withstand the test of time and stay intact. 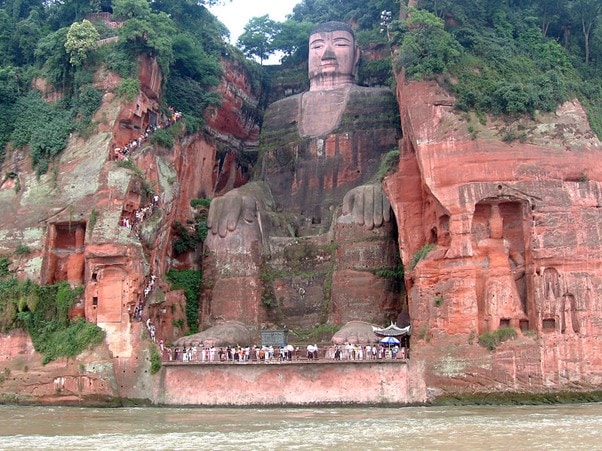 Over 71 meters in height, the Leshan Giant Buddha statue in China is a monstrous and imposing sculpture that inspires awe and respect from visitors.

The statue may be found in the city of Leshan, and it dates back to the 8th century when it was carved out of a cliff face on the banks of the Min River.

The statue’s construction started in the year 713 AD and continued for a total of 90 years. There were supposedly over one hundred thousand people working on the project simultaneously, and the monument was carved entirely using hammers and chisels.

In addition to being one of China’s most frequented tourist destinations, the Leshan Giant Buddha statue is a prized possession of the Chinese government and is regarded as a national treasure. Because UNESCO recognizes it as a World Heritage Site, it receives an incredible number of tourists yearly.

A Chinese monk named Haitong constructed the Leshan Giant Buddha statue to tame the treacherous currents that flowed through the Min River. He was under the impression that the monument would have a sedative effect on the water, preventing further deaths. 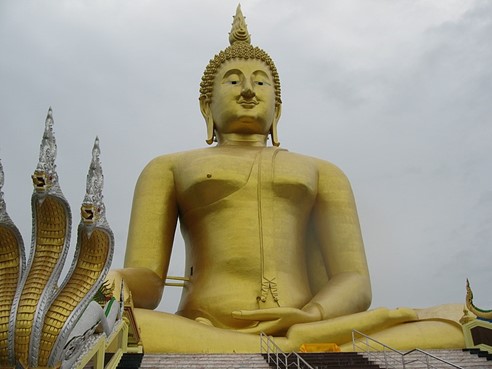 The Phra Buddha Maha Nawamin statue is a towering golden statue located in the Wat Muang temple in Bangkok, Thailand.

Standing at an impressive 72 feet tall, this statue is one of the largest in Thailand and is a popular attraction for tourists and locals alike.

The statue is made of gold-plated bronze and is adorned with intricate designs and intricate carvings. It represents the Buddha seated with his hands resting on his lap in the Dhyana Mudra position. In addition, the statue is filled with sacred relics, believed to have miraculous powers and bring good fortune to those who visit it.

The Phra Buddha Maha Nawamin statue is a testament to Thailand’s rich cultural and religious heritage. It is a sacred and beautiful monument that attracts people from all over the world and is a must-see attraction for anyone visiting Bangkok. 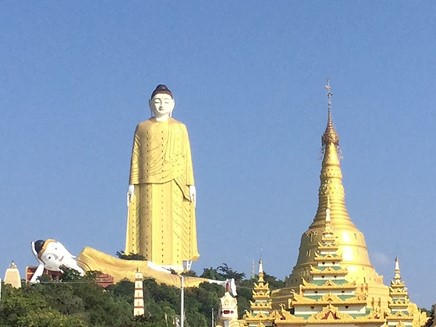 The Great Buddhas of Monywa statues are a pair of enormous Buddha sculptures carved out of stone and can be seen in Monywa, Myanmar.

The Laykyun Sekkya, the largest of the two sculptures, rises at a height of 116 meters (380 feet), making it the fourth-highest statue of the Buddha anywhere in the world. After work had been going on for over a decade, it was finally finished in 2008.

The second statue is a sitting figure of the Buddha, referred to as the Kwathitye. It is situated at a height of ninety meters (295 feet). It was finished in 1991 and now holds the title of being the world’s tallest sitting Buddha statue.

The sculptures, which can be seen on the banks of the Chindwin River, are regarded as some of the biggest Buddha statues today and may be found in Myanmar. 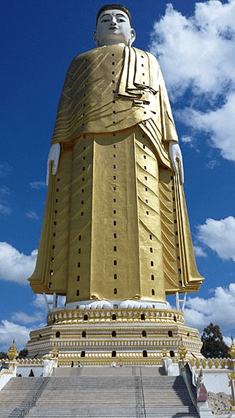 The enormous bronze statue of Gautama Buddha, known as the Laykyun Sekkya statue, may be seen in Monywa in Myanmar. It is the second-highest statue in the world, and it can be seen from a considerable distance. Its height is 116 meters.

The statue is encircled by smaller sculptures of Buddhas and other deities, perched on a massive lotus throne in the center of the room. The monument was finished in 2008, and since then, it has become a well-known destination for tourists in Myanmar.

Visitors to the statue can go to the peak point of the structure and take in a breathtaking vista of the region. 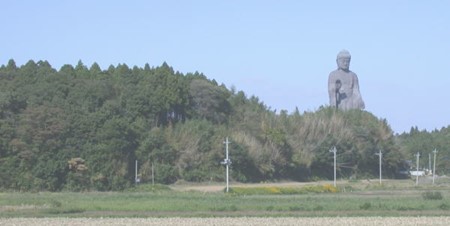 The enormous bronze statue known as the Ushiku Daibutsu may be seen in the Japanese city of Ushiku, which is situated in the prefecture of Ibaraki. Its height is 120 meters, making it one of the tallest sculptures in the world.

It depicts Amida Buddha in a sitting posture, with his right hand outstretched as a sign of reassurance and his left hand resting on his lap in the usual attitude of Buddhist statues. His left foot is placed in a lotus position.

In addition to its enormous size, the Ushiku Daibutsu is well-known for its exquisite appearance and meticulous artistry with which it was crafted. 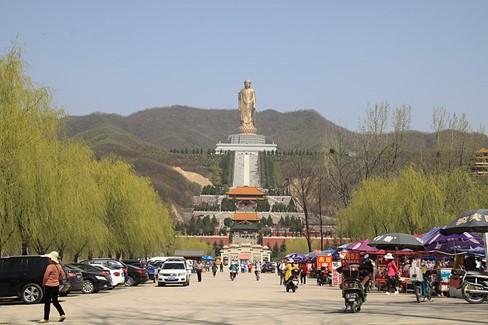 The statue stands atop Fodushan mountain outside the city. Visitors may ascend a winding route to the hill’s summit and take an elevator to the foot of the monument to see the stunning monument up close.

Henan’s massive monument attracts tourists from around the globe. Visitors also pay their respects and engage in Buddhist rites at the site.