A radio telescope is a customized antenna and radio receiver used to identify radio waves emitted by astronomical radio emitters in the heavens. Radio telescopes are the primary observing instrument that is utilized in the field of radio astronomy.

Radio astronomy is the study of the radio frequency portion of the electromagnetic spectrum that is emitted by astronomical objects. Optical telescopes are the primary observing instrument that is utilized in the field of traditional optical astronomy.

Traditional optical astronomy investigates the light wave portion of the spectrum emitted by astronomical objects. Radio telescopes, as opposed to optical telescopes, can be used both during the day and at night. Optical telescopes can only be used in the dark.

Karl Guthe Jansky, an engineer working for Bell Telephone Laboratories in Holmdel, New Jersey, in 1932, used an antenna that was constructed to investigate radio receiver noise to make the first discovery of radio waves coming from space.

Radio telescopes have been used to look at the Sun, star clusters, and galaxies for many years. Now, check out where the world’s largest radio telescopes are. 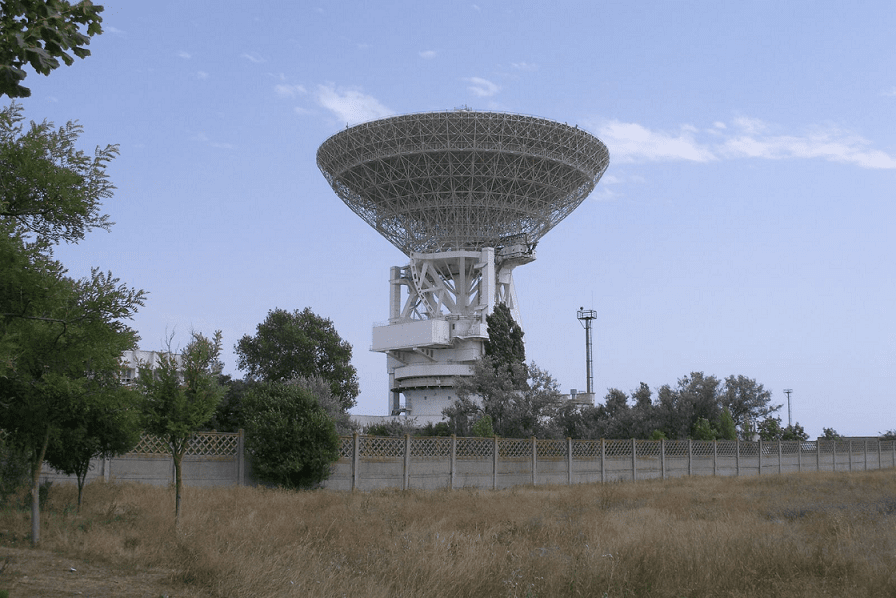 These transmitters make it possible to conduct active space experiments involving the emission of electromagnetic currents in the direction of the objects being studied, followed by an analysis of the signals that were reflected. 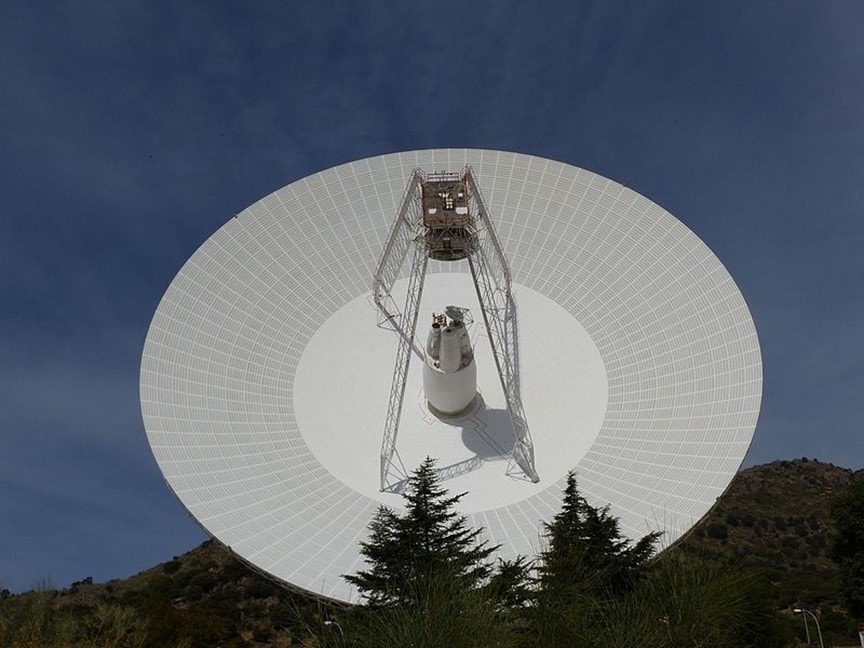 The antennas of the MDSCC at NASA are used for more than only making contact with faraway space missions. Research in the field of radio astronomy may also be accommodated within the busy schedules of this enormous equipment.

For the stations to connect with satellites, they depend on various antennas, some of which, like DSS-63, may have a diameter of up to 70 meters. A secondary field of activity in the complex is research in radio astronomy.

This is possible because each antenna can also be used as a radiotelescope, capturing and recording the energy radiated by many objects in space. Of course, the primary role of the MDSCC is to contribute to NASA’s Deep Space Network (DSN).

As a result of the fact that the stations are staffed around the clock, seven days a week, and all 365 days of the year, no information is ever lost.

An antenna with a diameter of 64 meters was used in constructing Deep Space Station 43 (DSS-43) from 1969 to 1973. The initial 26-meter antenna at the Complex was more than six times as sensitive as the 64-meter antenna, which was called DSS-42.

The DSS-43 maintained communication with spacecraft located farther away from Earth, even as the strength of the signal decreased.

In 1987, the DSS-43 antenna was expanded from a diameter of 64 meters to a diameter of 70 meters to improve its capabilities in preparation for the Voyager 2 rendezvous with Neptune in 1989.

The Southern Hemisphere does not have a larger steerable parabolic antenna than this one has. The enormous structure, which weighs more than 3000 tons, is supported by an oil layer around 0.17 millimeters thick and spins on it.

Before its formal inauguration in 1973, the DSS-43 antenna assisted in the Apollo 17 mission to the Moon whenever required. 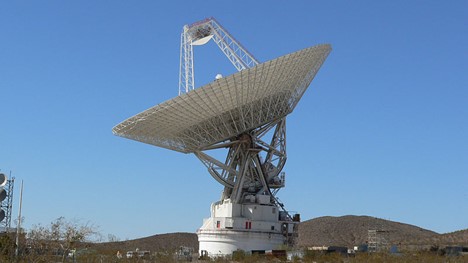 In the early 1960s, it was anticipated and reported that the DSS 14, with ground-based antennas with huge apertures and more capabilities, would be required to replace the previously used antennas with a diameter of 26 meters.

Its length was enlarged from 64 to 70 meters, its efficiency was improved using dual reflector shaping, and its operating frequencies were raised. The 70-m upgrade project was able to achieve a fraction of the performance improvement that was necessary.

The Voyager spacecraft had to undertake a flyby of Neptune in 1989, which demanded a significant improvement in DSN performance. During the final three decades of the 20th century, the antennas underwent substantial development in terms of performance. 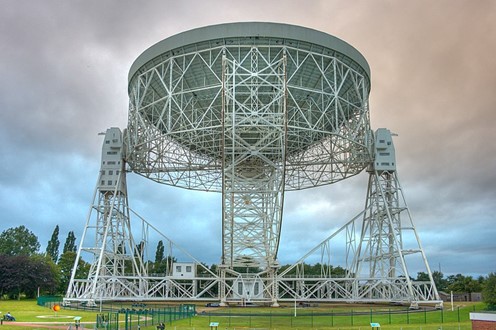 The Lovell telescope, which has a reflecting surface that is 76 meters in diameter, has been standing above the Cheshire plain ever since the work on it was finished in 1957.

Since then, the telescope has undergone several upgrades, but it still stands as one of the world’s largest and most powerful radio telescopes.

It was first referred to as the “250-foot telescope,” but in 1987, it was rechristened the Lovell Telescope in honor of Sir Bernard Lovell, the director of Jodrell Bank and the person who was responsible for its creation.

The study of pulsars, which are revolving white dwarf stars emitting electromagnetic radiation, has benefited from this discovery.

The telescope was an important tool that led to the discovery of quasars, which are supermassive black holes surrounded by a gas disc that orbits around them. 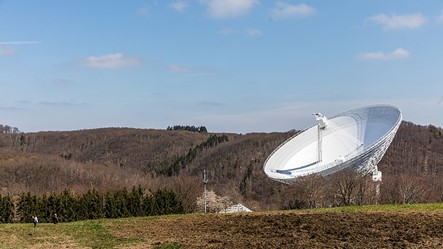 The Radio Telescope, Effelsberg, is one of the biggest completely steerable radio telescopes on earth, and its diameter is 100 meters. It is located in Germany. On May 12, 1971, it was officially put into operation.

Since the full start of operations in 1972, the technology has been continuously improved. These improvements include a new surface for the antenna-dish, improved reception of high-quality data, and extremely low-noise electronics.

The telescope is used to view pulsars, cold gas- and dust clusters, the locations of star formation, jets of matter generated by black holes and the nuclei (centers) of distant far-off galaxies, as well as radio emission and magnetic fields in our Milky Way and adjacent galaxies.

The receivers of the radio telescopes at the Effelsberg observatory are extraordinarily sensitive, allowing for the measurement of extremely faint radio signals coming from astronomical sources in the far reaches of the cosmos. 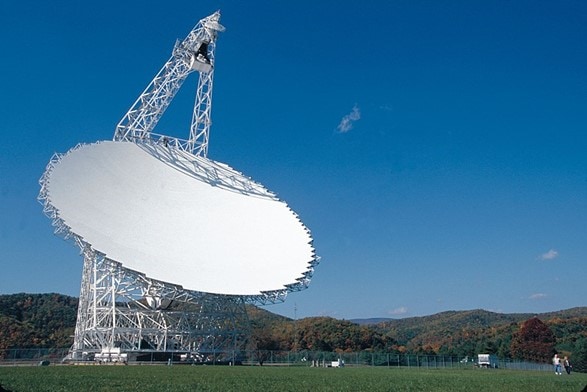 The Green Bank Telescope (GBT) is now the world’s biggest completely steerable radio telescope. It is located in Green Bank, West Virginia, in the United States. It has surpassed the Effelsberg Radio Telescope, which is located in Germany.

The GBT may be directed in any direction and can access 85 percent of the celestial hemisphere in its immediate vicinity. It is utilized for astronomy for around 6500 hours per year, while high-frequency science receives between 2000 and 3000 hours each year of its time.

The main reflector of a radio telescope is an off-axis piece of a paraboloid, which is somewhat unusual for such an instrument. This is the same design used in common residential satellite television dishes, such as the ones made by DirecTV. 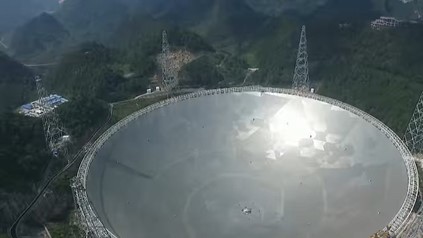 The Five-hundred-meter Aperture Spherical radio Telescope (FAST), found in a karst depression in the Chinese province of Guizhou, is the single-dish radio telescope with the greatest receiving area in the world. Its reception area is similar to that of 30 football fields.

For the next 20–30 years, it is anticipated that FAST will continue to perform at a level comparable to that of a world-class organization.

FAST’s innovative design has allowed it to surpass the previous engineering limit of 100 meters for the building of telescopes and has resulted in the creation of a new method to construct huge radio telescopes.

The idea for the telescope was first put up in 1994. In July of 2007, the National Development and Reform Commission (NDRC) blessed the project and gave it the go-ahead.

In the 5-kilometer radius around the telescope, visitors are not permitted to use mobile phones or other equipment that generates radio waves.